I kinda messed up with the timing of this post. I thought it’d be cute to post up a review of the Monster Fighters set 9463 The Werewolf on a full-moon night but I slightly miscalculated, so it’s a day late. The moon still kinda looks quite full in the night sky today, so a case could still be made if lycanthropes could still transform.

The Werewolf is a pretty old set from the Monster Fighters which came out way back in 2012.It was a pretty kickass theme that blended bounty hunters with paranormal creatures such as Zombies, Vampires and Werewolves. My wife got me this set for Valentine’s Day earlier this year and I finally got around to putting it together! 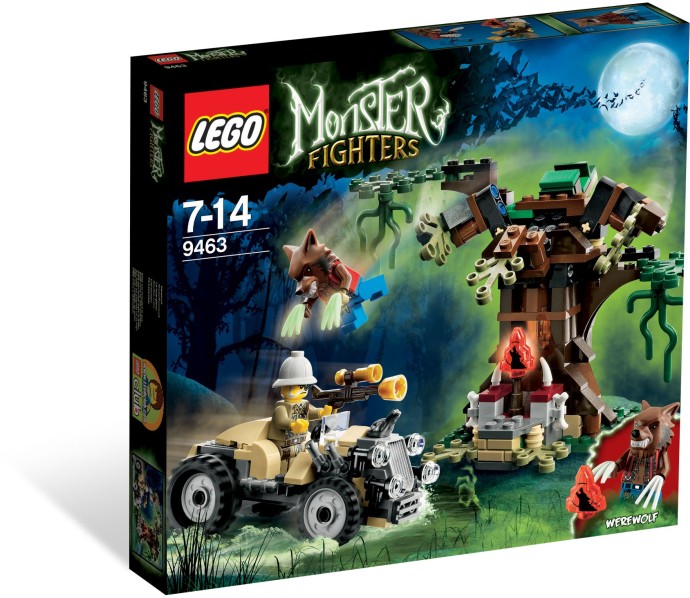 Although it’s part of a discontinued theme, you may be able to find The Werewold and other Monster Fighter sets in certain K-Marts across Australia as they are either 1) having trouble selling them 2) dramatically overstocked on Monster Fighters.

The Werewolf is one of the smaller sets in the Monster Fighters set but I had an absolute blast putting it together. The final model was a lot smaller than I expected it to be, probably because the box that it came in was quite large and had an illustration that dramatically blew up the size of the set. 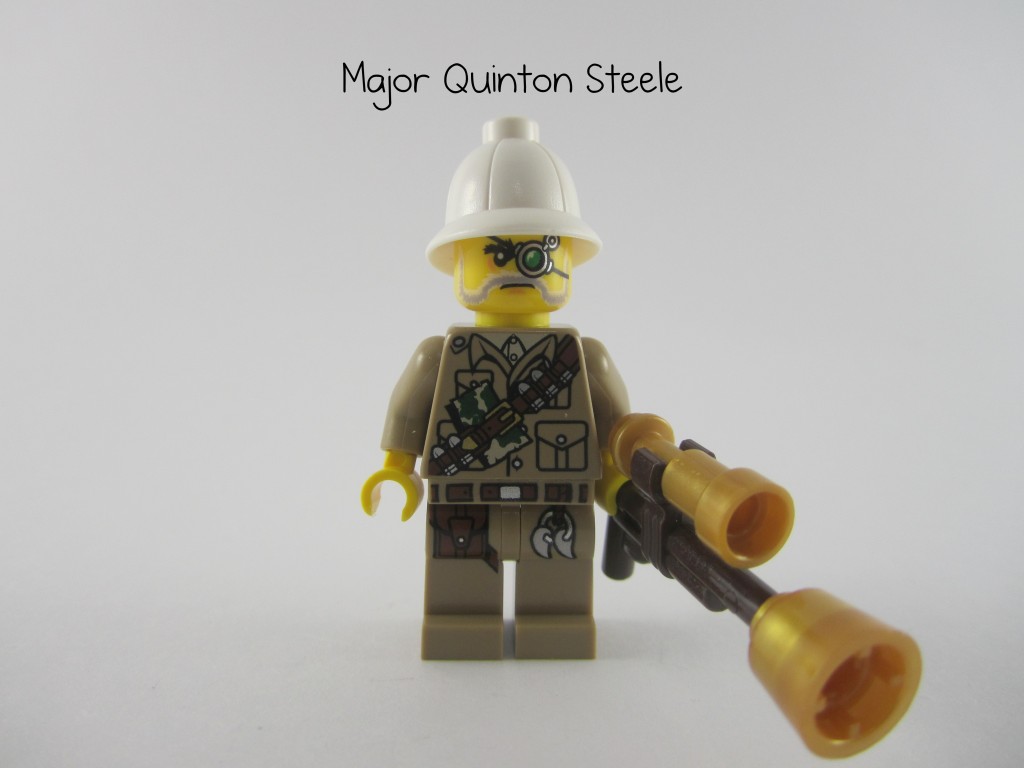 There are 2 minifigs contained in the set, the first being Major Quinton Steele, a British inspired safari hunter character. Since he’s a human, I automatically assume that he’s one of the good guys and that his hobbies involve big game hunting paranormal creatures like Werewolves after getting bored with hunting Rhinos and Lions in the African Safari.

Major Quinton Steele has pretty impressive details and arsenal, starting of course with his pith helmet, greying handlebar mustache and targeting reticule on his left eye. He’s decked out in tan garments reminiscent of the iconic look of British explorers or poachers and has wonderful printed details such as a bandolier across over his chest, a map and some nice leg prints which contain what I think are teeth or claws hanging from a steel ring. 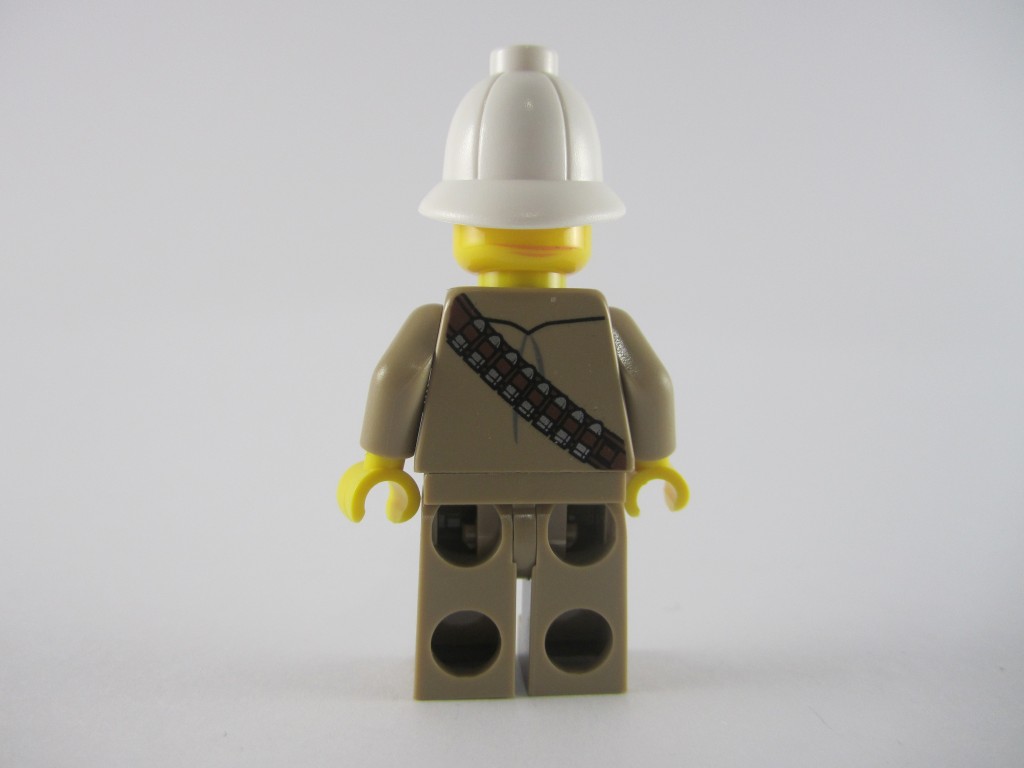 He’s got back printing as well, with the bandolier extending to his back. A very nice nod to him being a Werewolf hunter are the silver bullets in his ammo belt. 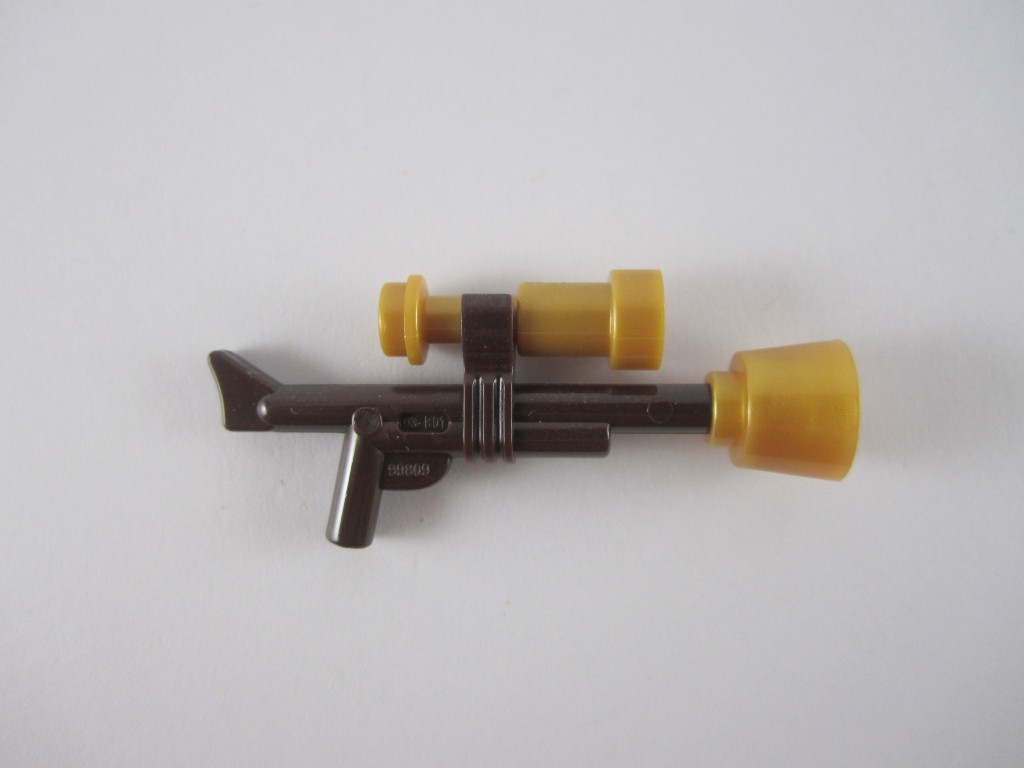 His blunderbuss is a pretty kick ass weapon! 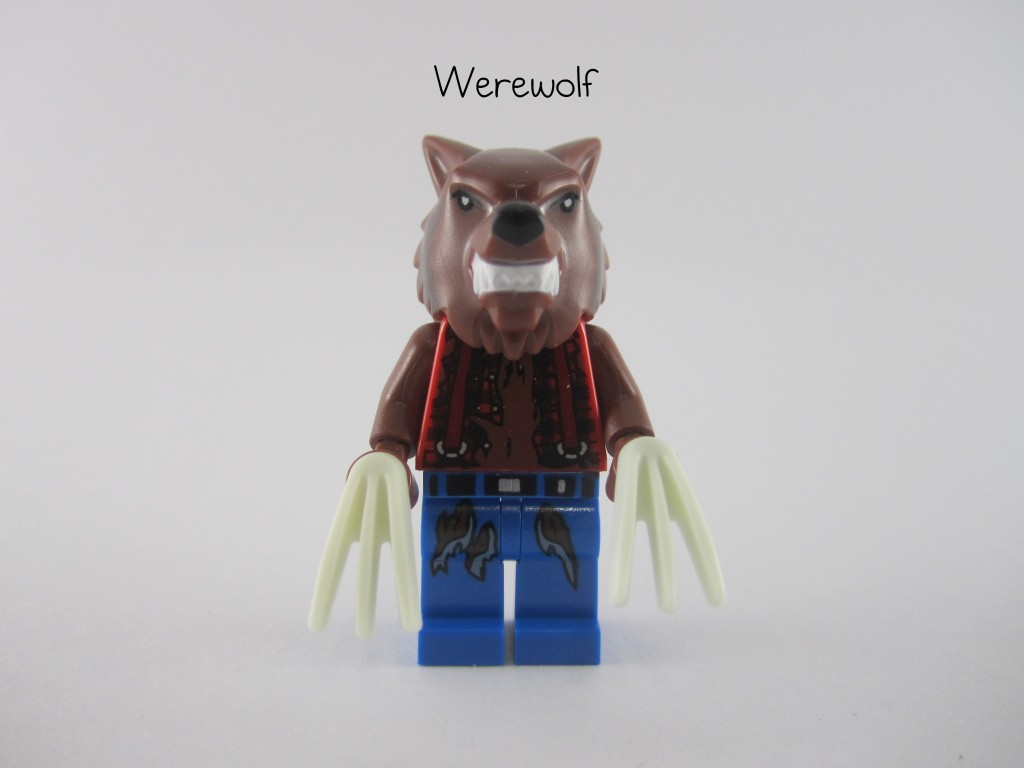 The real star of this set is the Werewolf who has a fantastically moulded headpiece. I’d like to think that poor wolfy here was just a regular LEGO minifigure (who worked as a lumberjack) who was unfortunate enough to be bitten by a feral Werewolf and has to endure a grotesque transformation every full-moon night.

The Werewolf’s torso and legs have snazzy details like a flannel print shirt and jeans that ripped apart during the transformation process, revealing the Werewolf’s brand new furry pelt. Wolfy also has a brand new oversized pair of claws making him look a little bit like Wolverine. 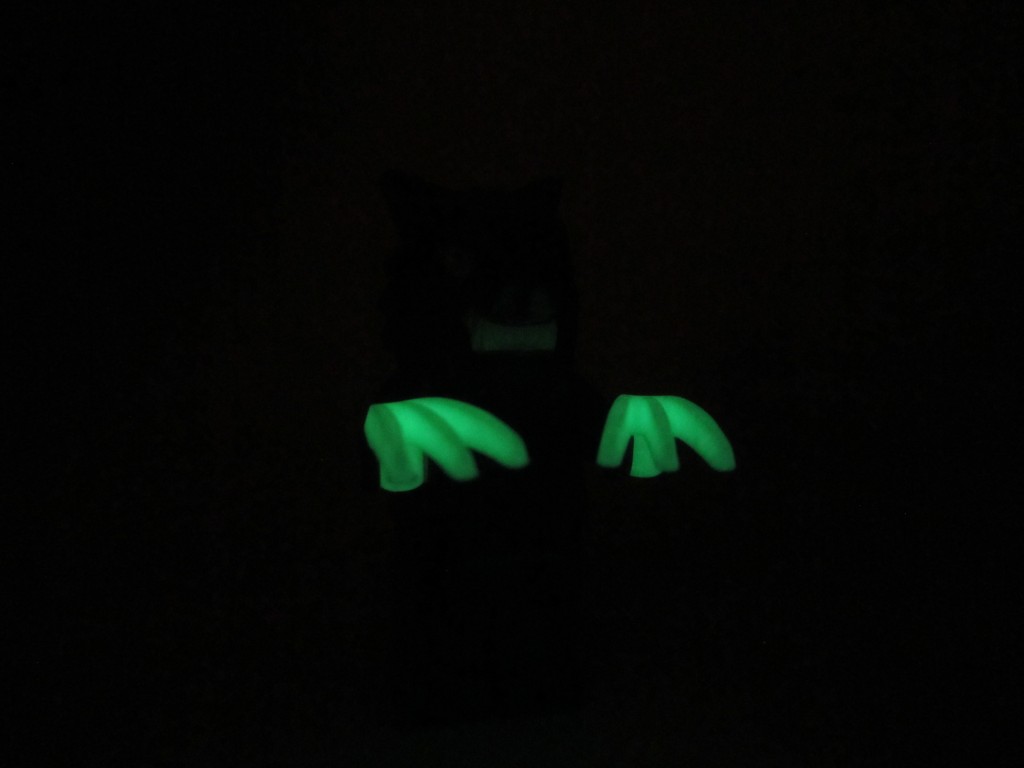 Oh did I mention that his claws glow in the dark? It’s a gimmick that’s simultaneously silly and cool at the same time but I appreciate the relevance to the whole dark and spooky flavour of the Monster Fighters theme. The Werewolf is almost worth the price of admission thanks to the intricate level of detail of his head. It’s quite possibly one of the most beautiful head moulds that I have ever owned. I especially like the wonderfully detailed teeth and mane. It’s a great minifig that keeps me believing that LEGO is still capable of producing high quality designs and elements. It’s a little nitpicky, but it would’ve been a nice bonus if LEGO included another regular minifigure head of the Werewolf as a normal human being. 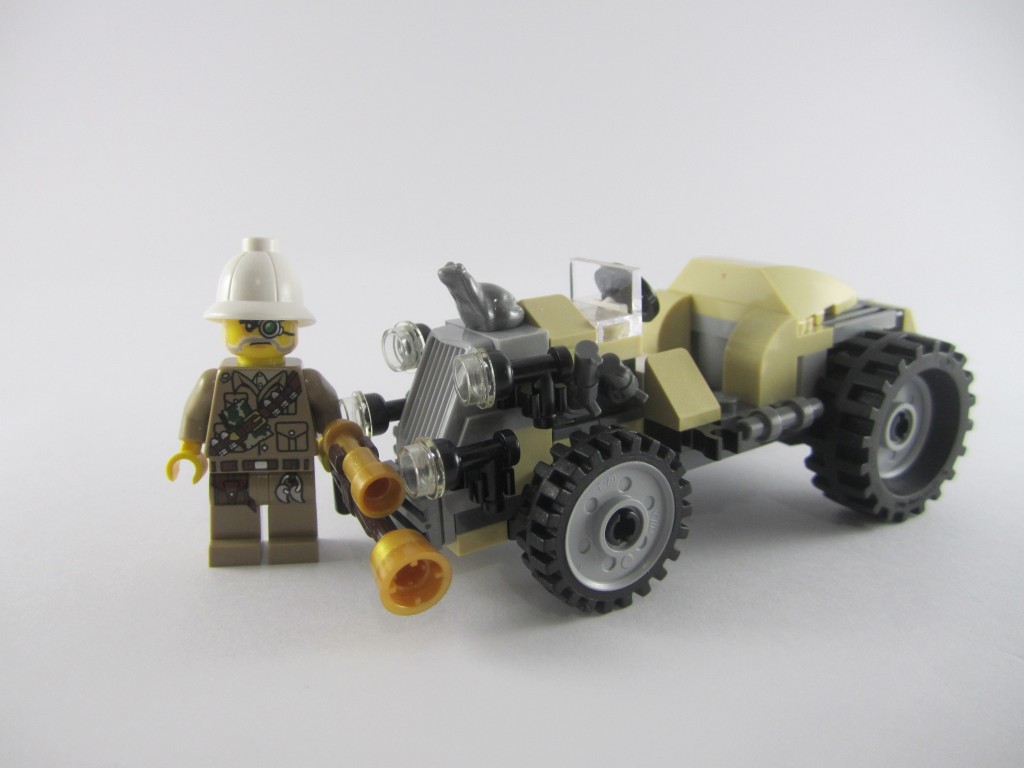 The first thing you build is Major Steele’s vehicle that’s a cross between a vintage automobile and an all-terrain vehicle. First of all, the colours used in the vehicle are fantastic and work extremely well together. I’m a big fan of the many different shades of grey combined with black and the tan bricks. 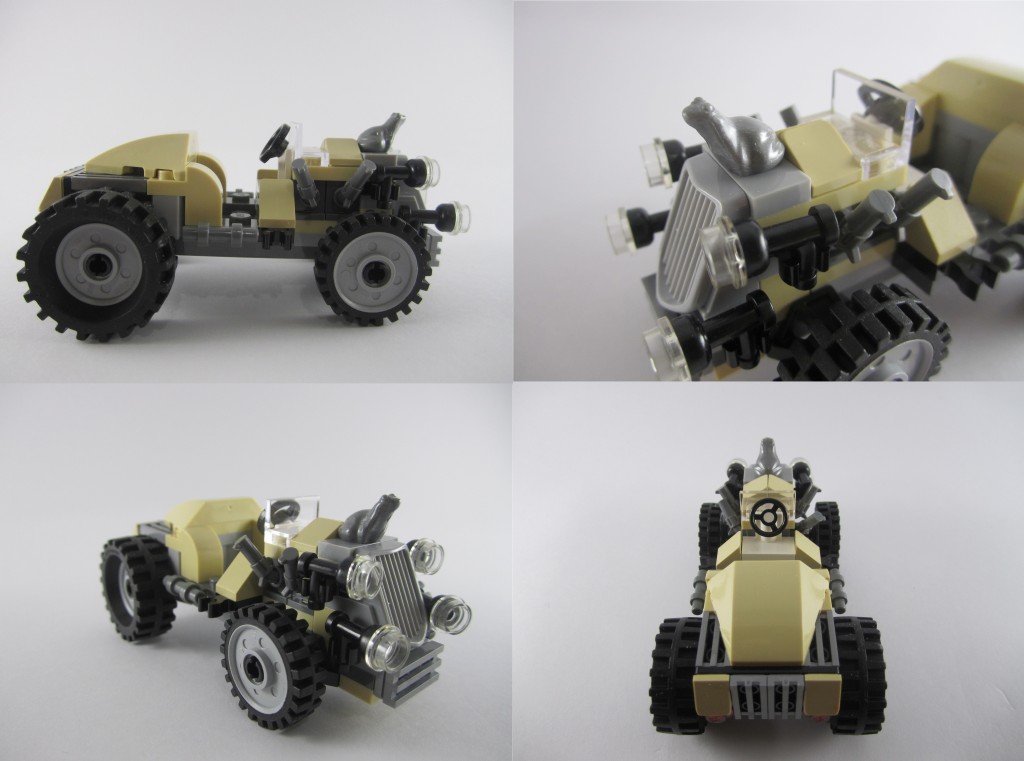 Major Steele’s ride is both compact and packs some very nice features such as the use of 4 torchlights for the headlamps as well as a sleek little metallic frog perched on the bonnet. The engine block is also quite interesting, with the use of revolvers as exhaust pipes  – that or they’re anti airborne defensive guns, you know in case Major Steele comes under attack from flying vampire or giant bats. 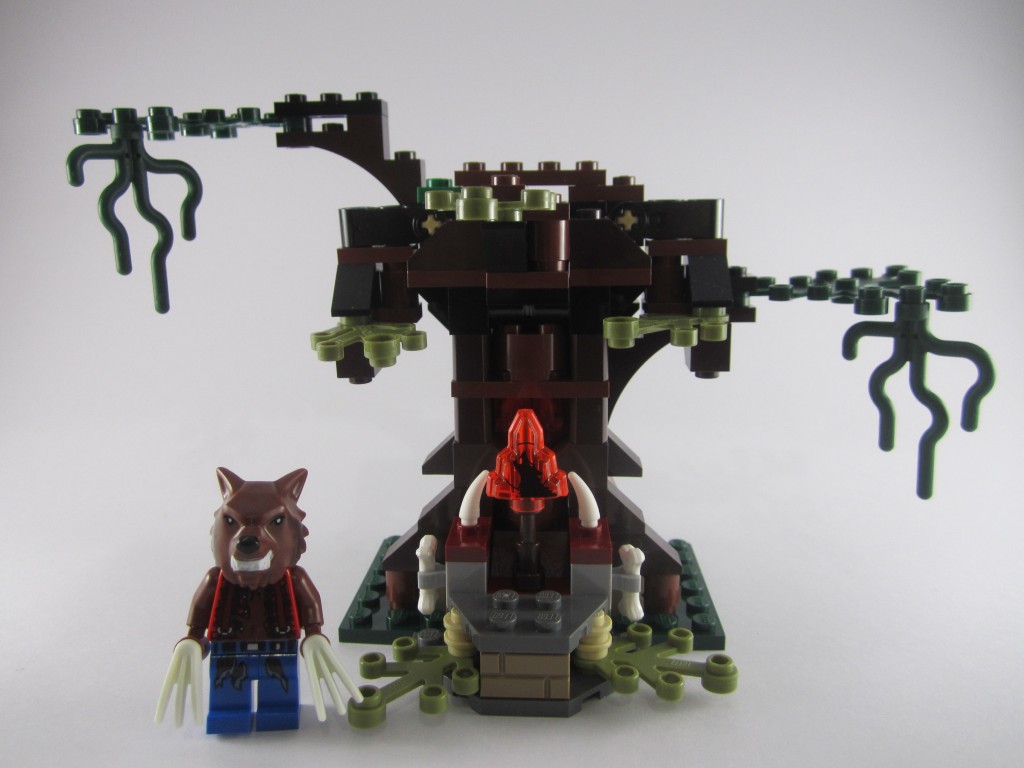 Next up is the Werewolf’s dwelling place, a brick-built tree with a few hidden tricks hidden in it. When I first put the tree together, the size took me by surprise – I expected it to be a lot bigger. Despite it’s size, it still manages to look great on display and isn’t disappointing in any way. The tree’s branches which have hanging vines on both ends is one of the more visually pleasing aspects of the tree, giving it a very spooky look. 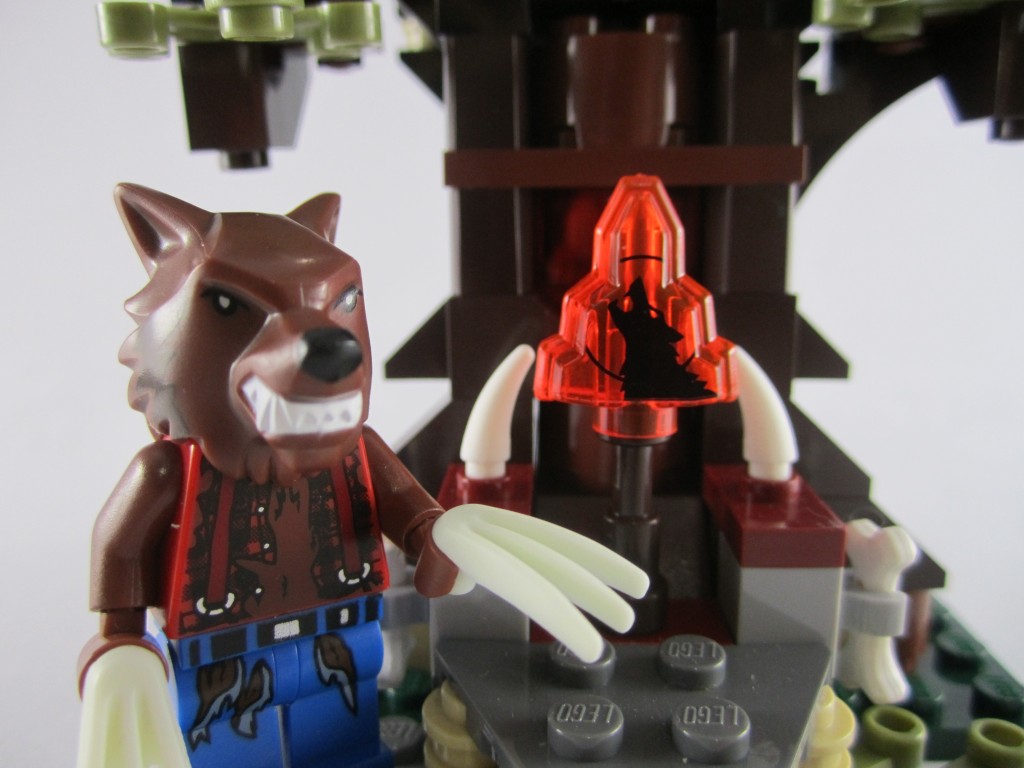 At the foot of the tree lies a little shrine of sorts which houses the Werewolf moonstone. The moonstones play an integral part in the Monster Fighters theme with each paranormal creature tasked with protecting one. When all the moonstones are gathered together, something extra dark and extra spooky happens – the Sun is eclipsed forever and the world of Monster Fighters is plunged into eternal darkness. 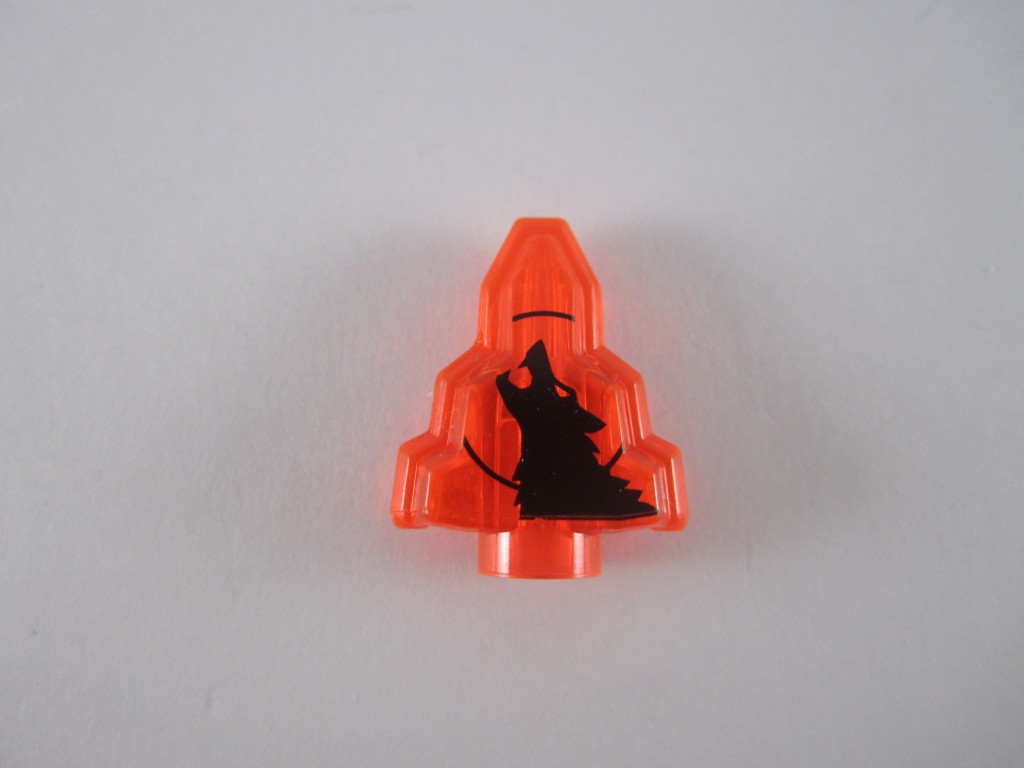 Here’s a closer look at the moonstone, a transparent red crystal-like piece that bears an emblem unique to the paranormal monster guarding it – in this case, a wolf howling against a full moon. 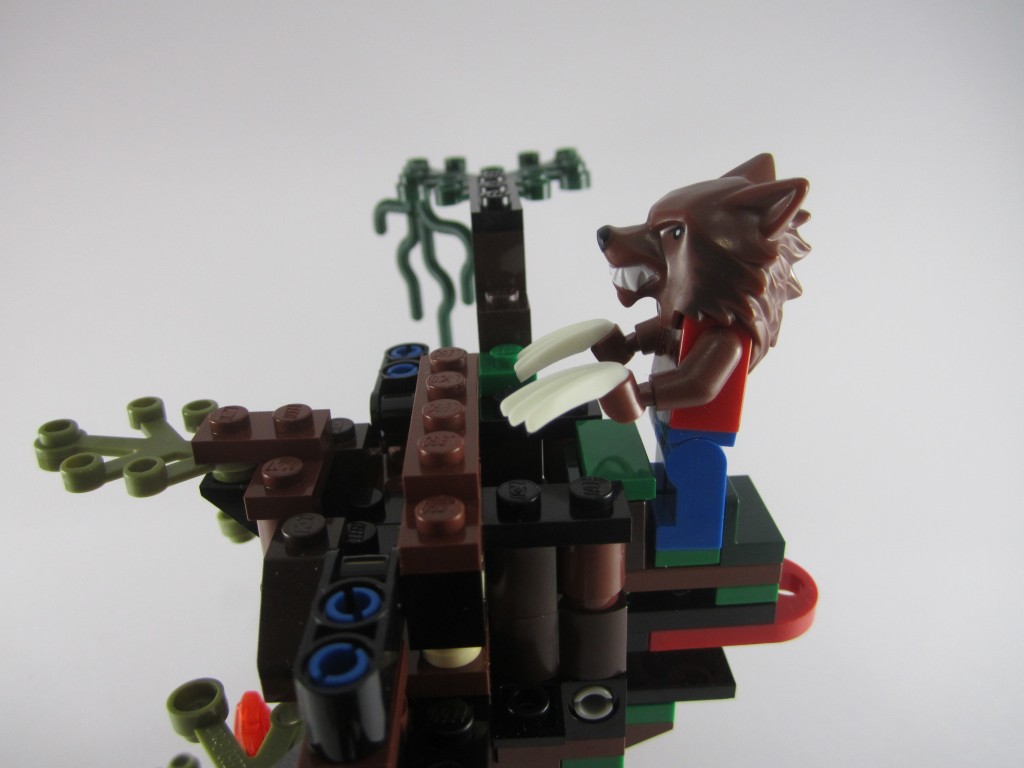 At the top of the tree is one of my favourite part of this set – the play feature. Yes, I said that right, a play feature. I’m normally not a fan of play features as they tend to either be forced or just plain boring. This one is a whole different story. There is a small slot where the Werewolf can be snugly placed. After Wolfy is nice and secured, you can push down on the red lever to launch the Werewolf into the air. In the process, the two small branches at the top split open to make space for Werewolf as he is propelled forwards.

Check out the GIF of this play feature in action. I really enjoyed playing around with this set and it makes me chuckle every time I sent the Werewolf hurtling through the air. I could tell that there was a lot of thought that went into designing this set’s play feature and I do hope we get to see more interactive and fun mechanics like this worked into future sets. 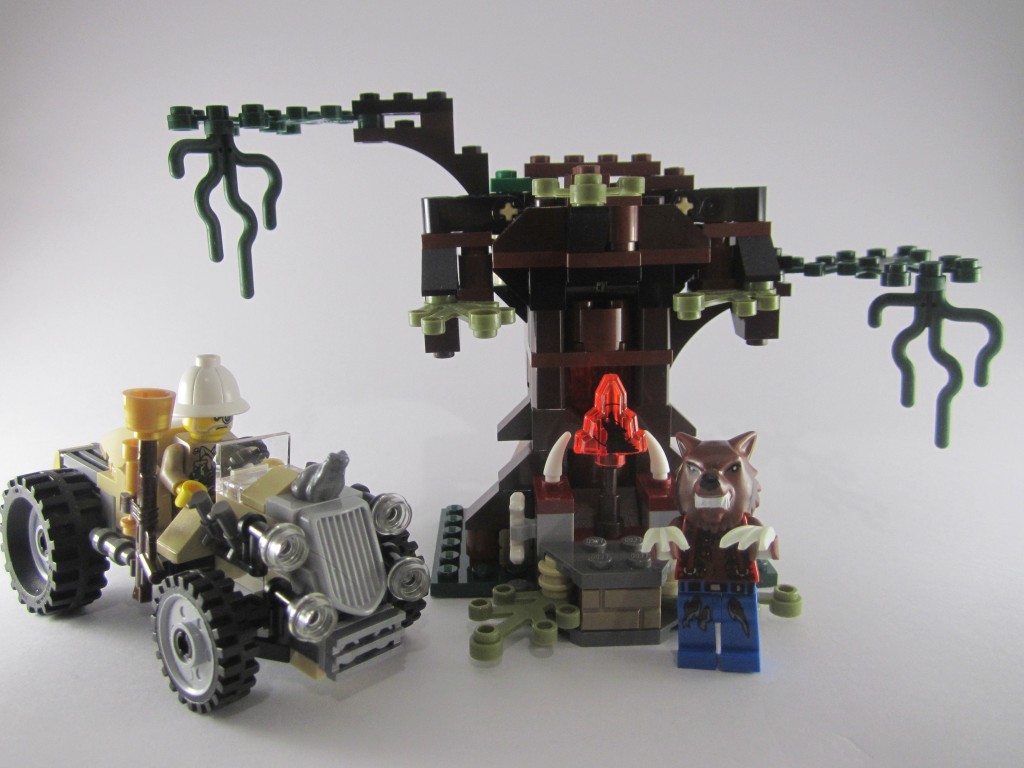 Final Thoughts: I really enjoyed putting this set together and was extremely pleased with the end result. Both the car and the tree are tight little builds that look great when on display despite being on the smaller side. The two fantastic minifigures are great additions to any collection due to their incredibly detailed designs. The play feature is like the icing on a very delicious cake. It’s not often that sets give you a complete sense of satisfaction – like how everything just comes together and just works. I wish I’d have gotten this set a lot earlier, and if you have the opportunity to buy it, I would highly recommend doing so.

« “She may not look like much, but she’s got it where it counts, kid.”
An Interview with Brent Waller, Australian Designer of LEGO 21108 Ghostbusters »

Big shoutout to @little.ongs for helping build the

Why.. @lego. Why? Thanks @bricksetofficial for fe