I can’t believe it’s been so long since I’ve built and reviewed a LEGO Friends set! This year has been phenomenal with so many great sets being put out by LEGO that I’m finding it more and more difficult keeping up with the pace. You don’t want to know how many unbuilt sets I have at home… a problem that I’m sure a lot of other LEGO fans can relate with.

I’m a big fan of LEGO Friends (not so much the minidolls) and the latest Jungle Rescue subtheme which sees the heroines from Heartlake City venture deep into the jungle to save, study and interact with the local wildlife piqued my interest. I’m most likely going to add most of the sets to my collection.

I really like the unique jungle setting, the focus on conversation and unique fauna which is a wonderful departure from the traditional pastel and pink-heavy builds found in Friends sets. Jungle Falls Rescue is the very first set I put together from the new Jungle Rescue wave but it certainly won’t be the last. 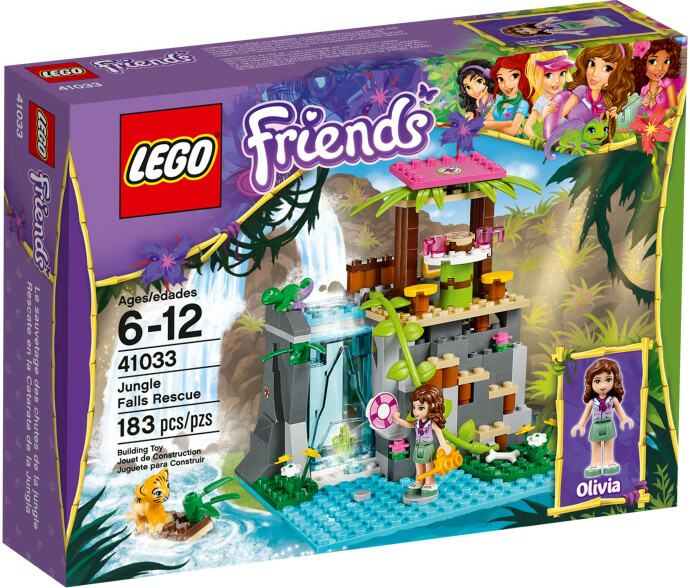 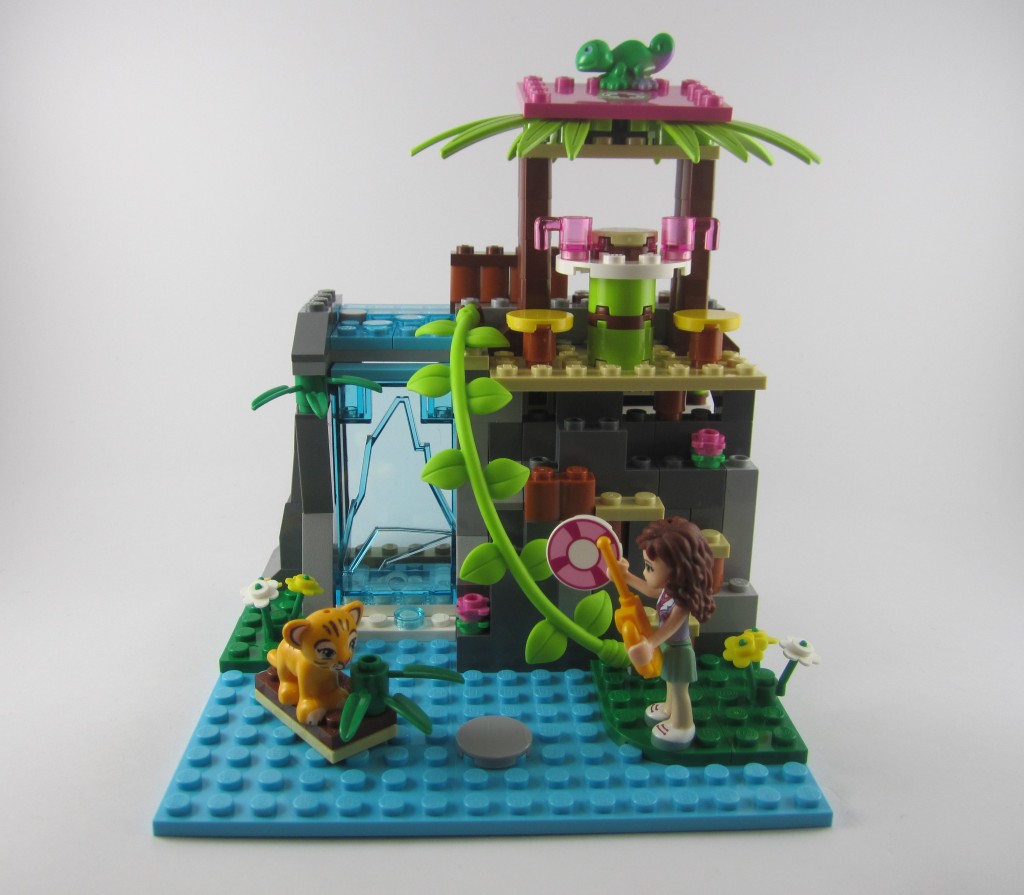 LEGO Friends has always had a keen emphasis on cute little critters and the latest iteration of Friends sets take it to a whole new adventurous level. We start of with Jungle Falls Rescue, a medium sized build that has Olivia, one of the main Friends girls braving a waterfall to come to the aid of a tiger cub in distress.

Despite being considered a small set (price-wise), weighing in at just under 200 pieces, Jungle Falls Rescue doesn’t have that “small set” feel due to its size and how great everything looks. Constructed upon a 16 x 16 base plate, the vignette style build is extremely pleasing to the eye. Personally, I’m a big fan of vignettes as they look really good on display, which is what my LEGO sets are primarily used for.

The set is really nice to look at, being made up mostly of a large vertical cliff which houses a waterfall (built using a transparent blue icy wall element) and tiny little hut complete with outdoor seating and a table. Before we get into the set, let’s have a look at Olivia and her animal friends. 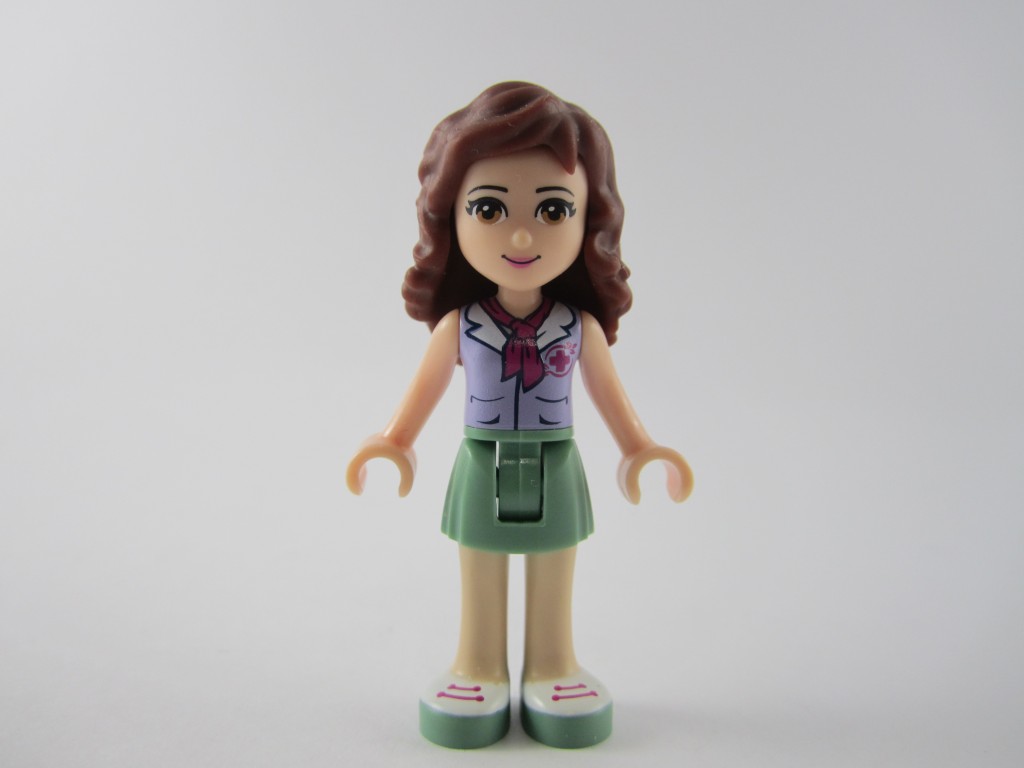 We only get 1 minidoll in Jungle Falls Rescue – Olivia, who is dressed up in a slightly more rugged but still relatively stylish sleeveless top embellished by a magenta scarf.

Her blouse features some crisp details such as the LEGO Friends Jungle Rescue logo and two pockets. She has curly hair that’s made up of squishy rubbery plastic which I’m not particularly fond of but kinda looks good on Friends minidolls. 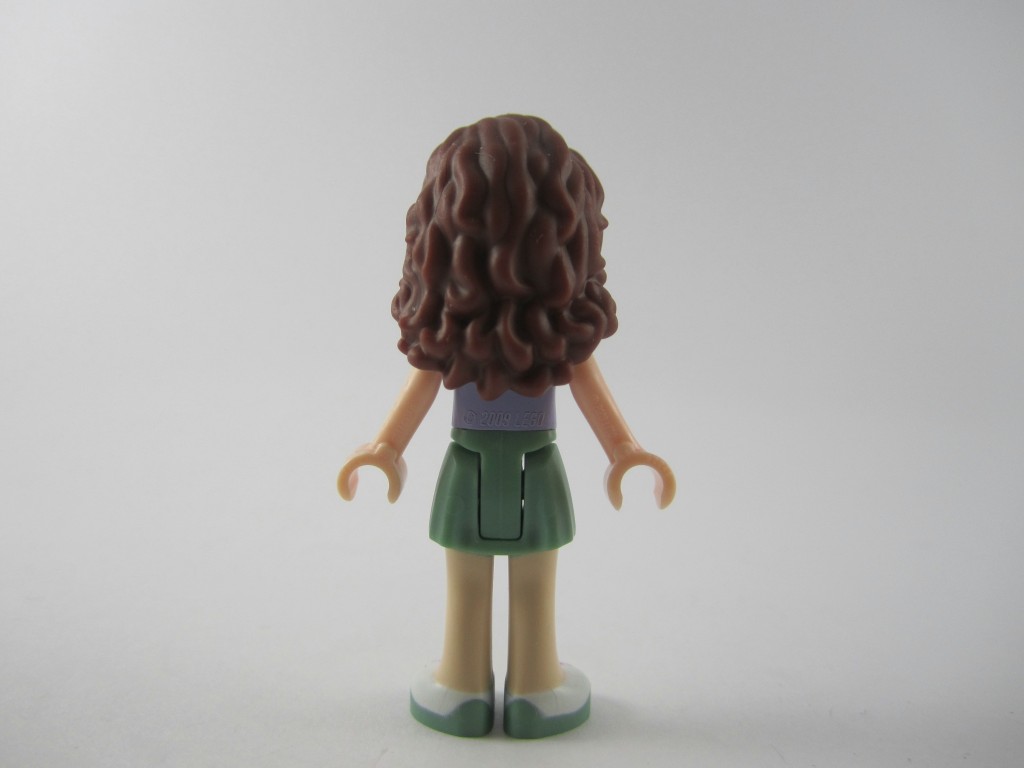 Olivia doesn’t have any printing on her back, which isn’t that bad since her hair obscures most of her torso anyway. There is a 2009 LEGO copyright embossed onto her torso. 2009 is about 5 years ago and it makes me wonder what other cool concepts or designs LEGO has hidden away deep within their R&D Department that we’ll only get to play in 5 years time.

Rounding up her attire is a sand green skirt and matching shoes. I don’t particularly hate or love minidolls but Olivia is pretty decent as minidolls go. 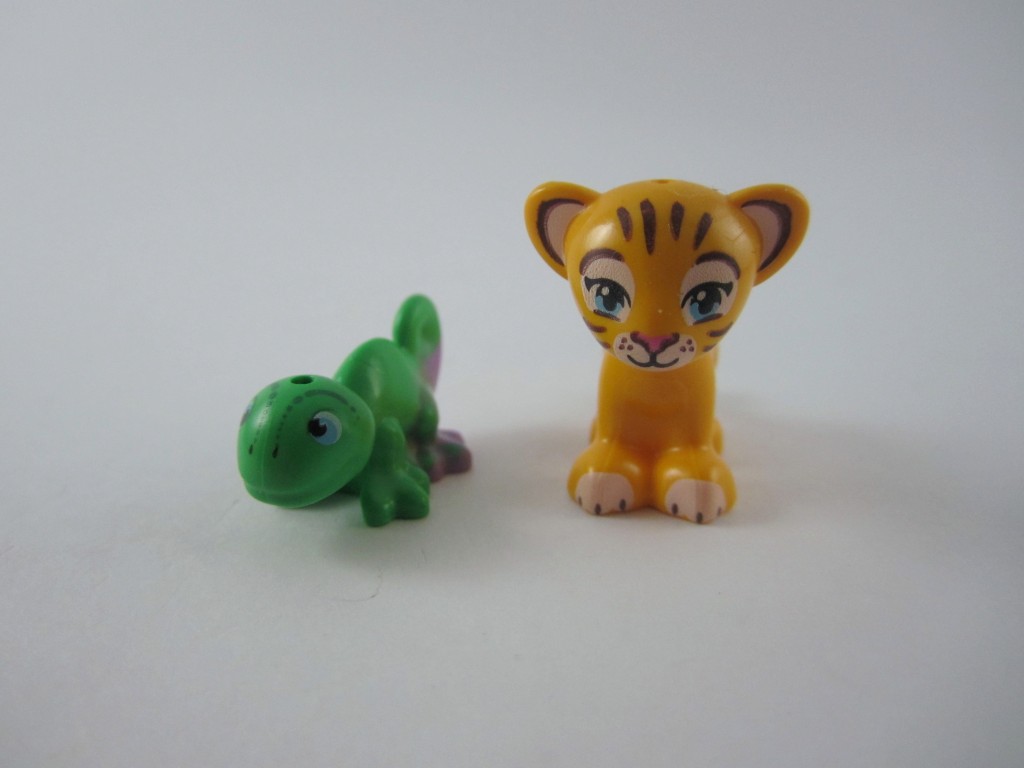 With this particular Friends sub-theme focusing on animal rescue, the minidolls naturally take a back seat to the little critters in distress. A chameleon and tiger cub are included, both animal moulds having been featured previously in other sets. The Tiger Cub was previously available in one of the Animal Series 4 sets and the chameleon showed up in Rapunzel’s Creative Tower albeit in a slightly different colour. 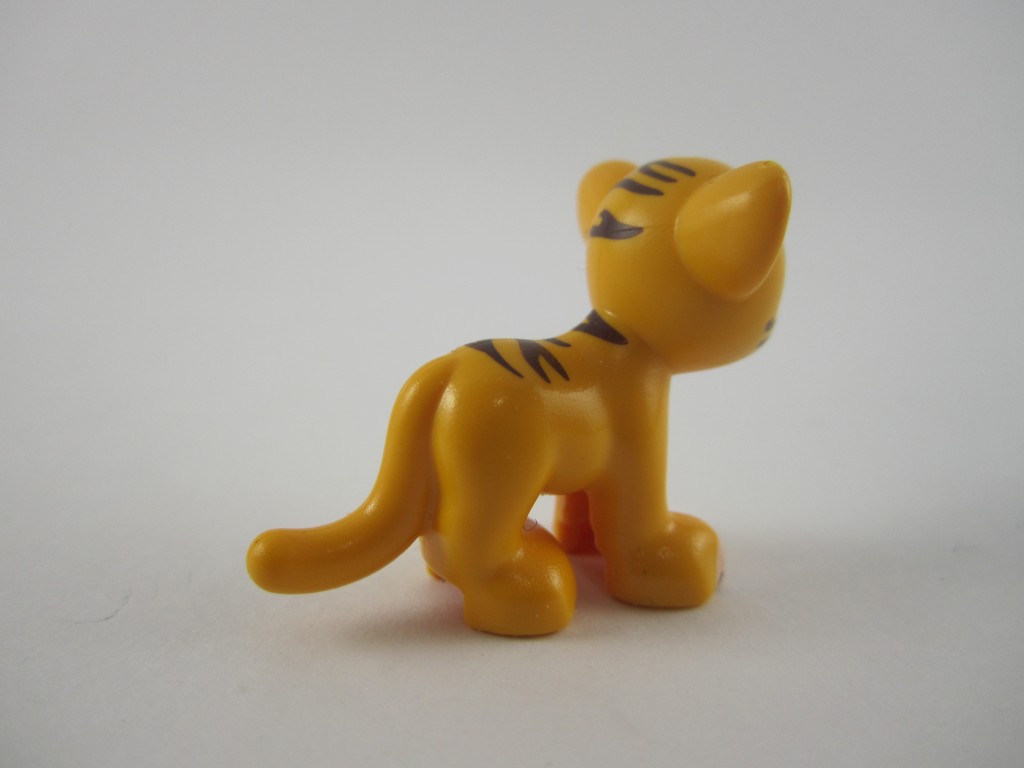 Until we get a full-sized LEGO tiger, the cub will have to do. It’s still a great animal to have with nice face printing as well as stripes all the way down its back. 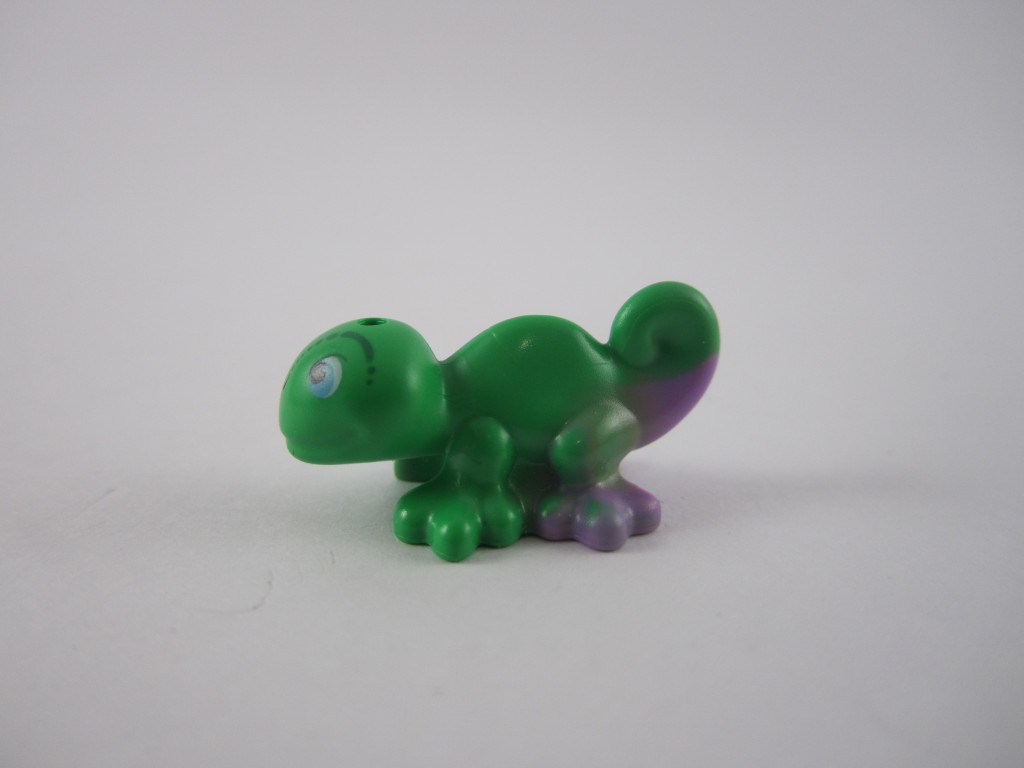 The chameleon is definitely the most alarming animal in this set. For one thing, it’s the size of a lion cub! Once we’ve accepted the fact that abnormally sized chameleons are running unchecked deep in Heartlake Jungle (not the official name, but I’m going to use it from now onwards), we can get to appreciate how cute this little guy is, especially with the large smile on his face.

The purple colouring seems a little odd – I have a theory that a batch of chameleons were tainted by purple dye and LEGO just decided to go with it and use these hybrid colour chameleons in a set.

That said, I like the purple hues, and I only wish that it was distributed a lot more evenly throughout the chameleon’s body rather than having it be concentrated on its hind legs and tail. 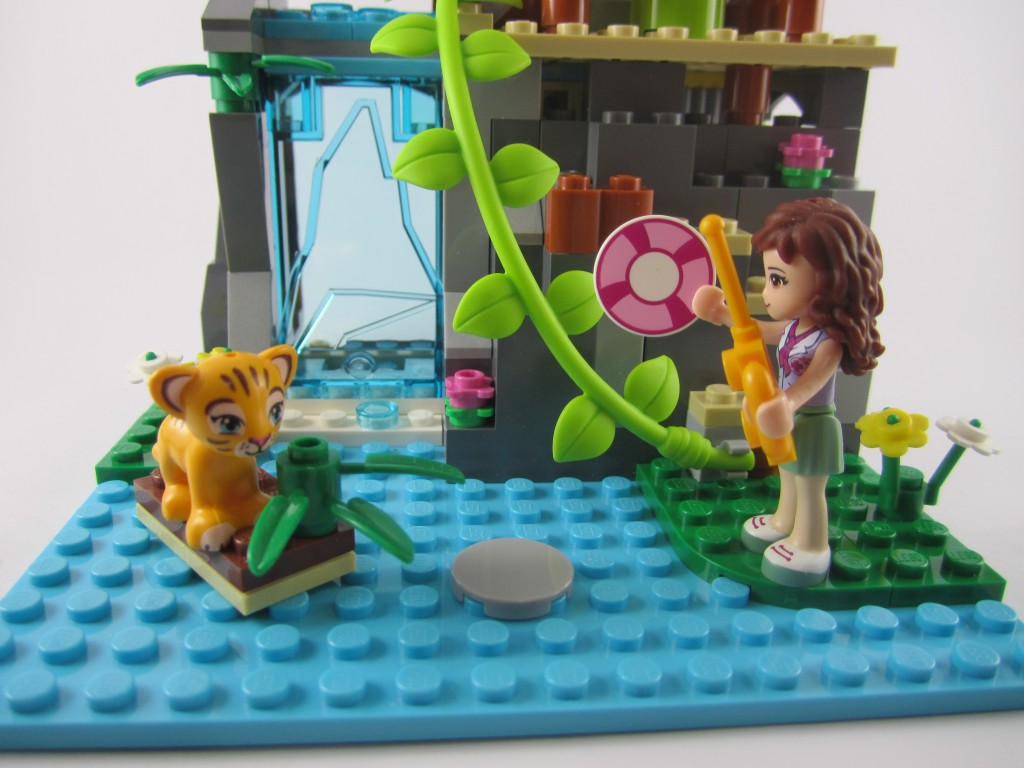 As the set’s name suggests, Jungle Falls Rescue revolves around Olivia saving the poor tiger cub from being engulfed by the rapids. The poor little thing has somehow got stuck on a plank of wood and is drifting in the fast moving water.

It’s up to Olivia to save the day – alerted to the animal in distress by her team of animal rescue experts, she arrives just in time to throw a float to save the tiger cub from falling into the river. 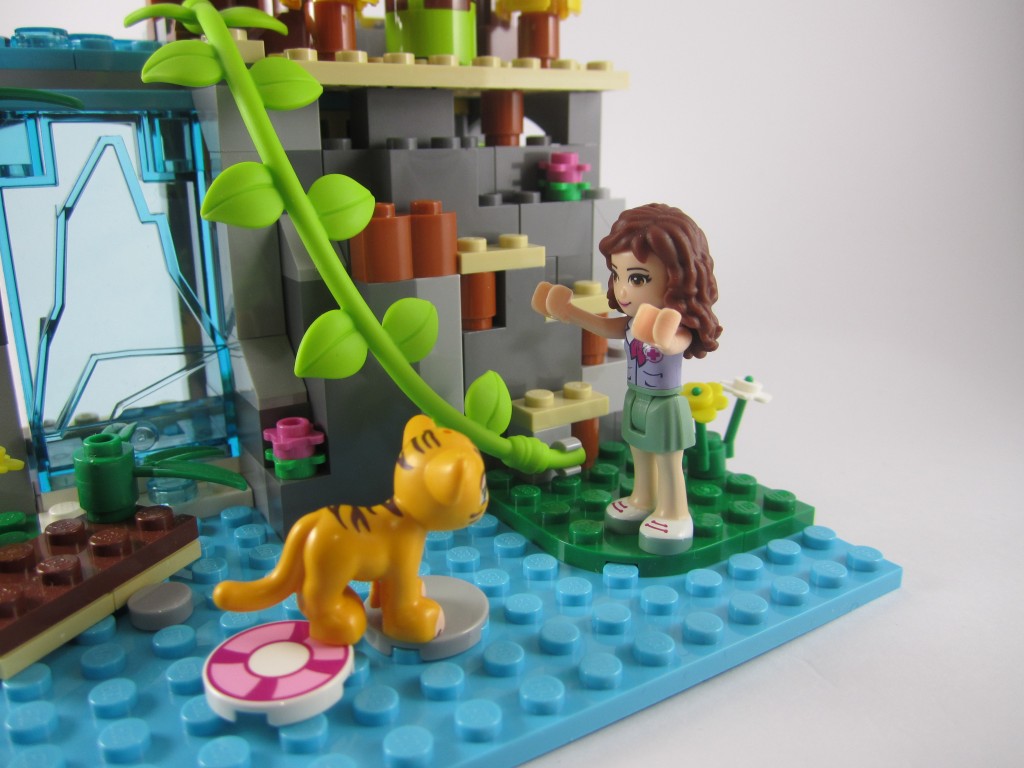 All good! The tiger cub is almost out of harm’s way. Hurray! Yes, that is a printed float tile.

Featured in the picture above is a good look at the new vine piece which I really like. It’s made of squishy rubbery plastic which allows it to bend in many different ways. It’s definitely a great part to have and any new foliage pieces are usually well received by MOC (My Own Creations) builders.

It’s also impressive how a single piece manages to add so much more “jungliness” to a set and theme. 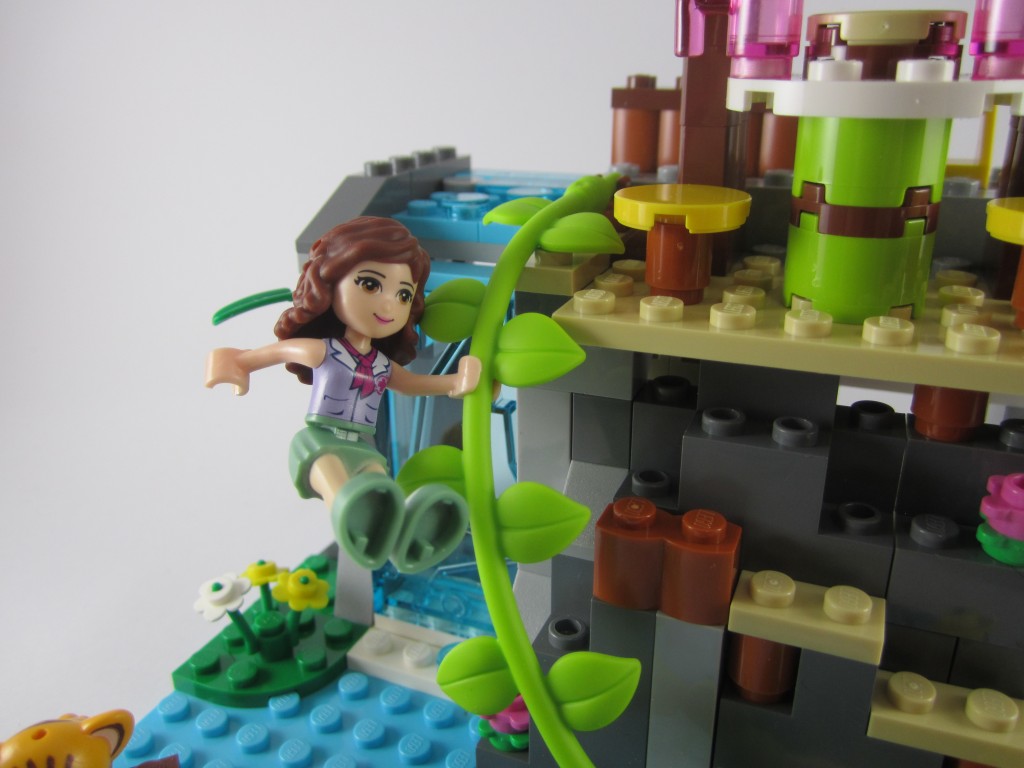 You can do so much with the vine – here Olivia enacts her Tarzan fantasies as she uses it to slide down from the hut. 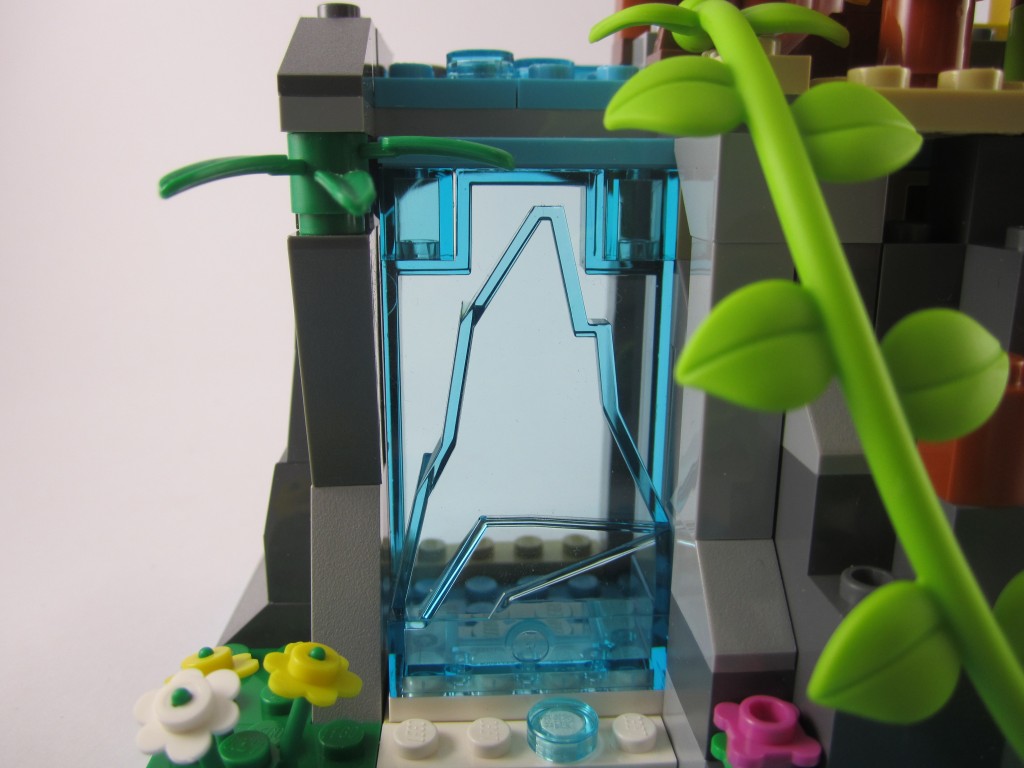 The waterfall is quite a peculiar little thing. I really don’t like the use of the icy wall element at all. While the part is great and I’m more than happy to add it to my collection, it just doesn’t look like a waterfall.

Instead of using this piece, LEGO could’ve used a variety of transparent blue bricks and cascade them to create the look of falling water. Add in a few white round plates at the foot of the waterfall to make it look like spray and you have a much more believable waterfall. 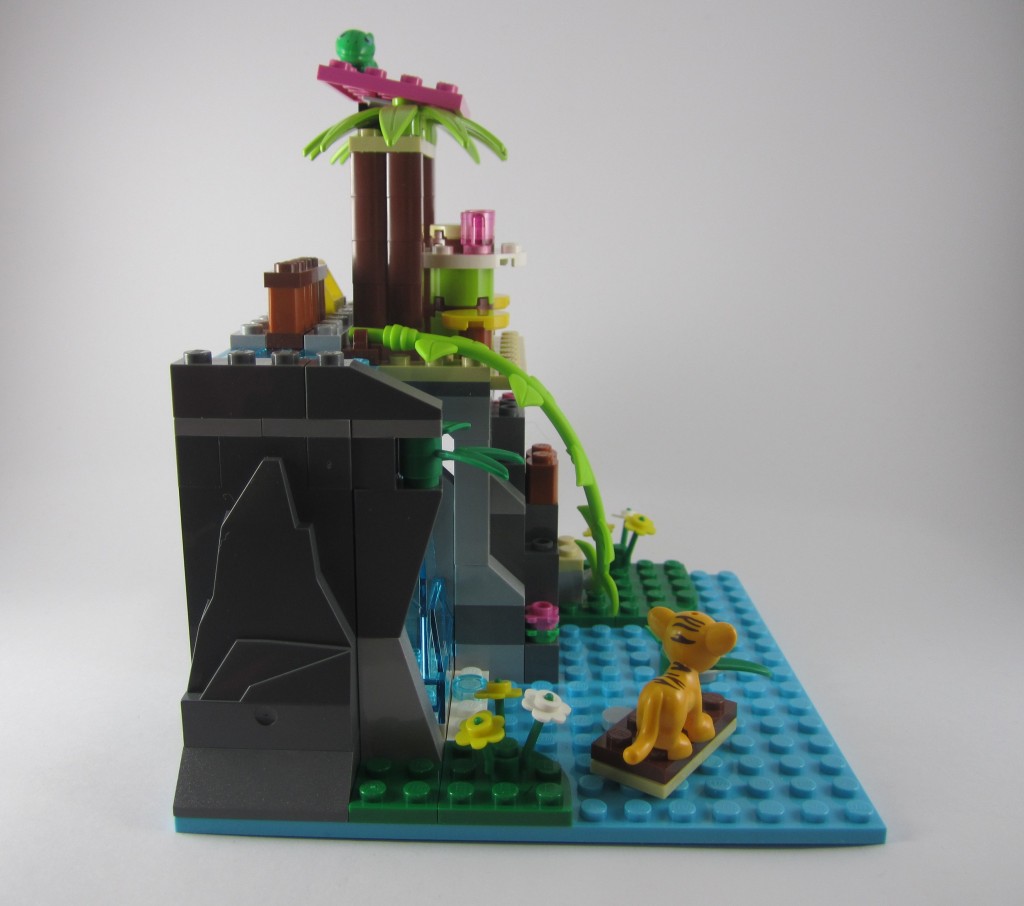 The left side of the build is sealed off rather neatly with the rocky slate coloured wall element, giving it a very uniform and clean look. 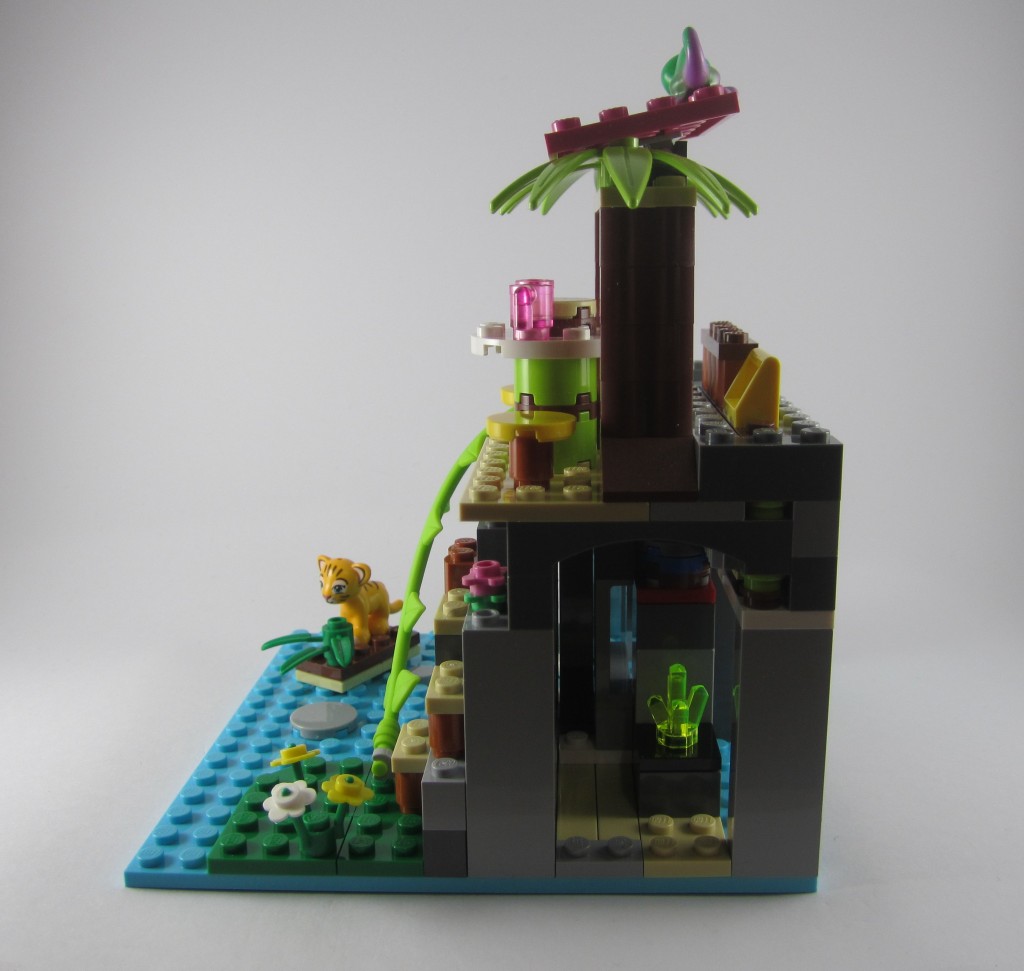 From the other end, you’ll notice an opening that leads to a small cave which houses what appears to be a neon green crystal. 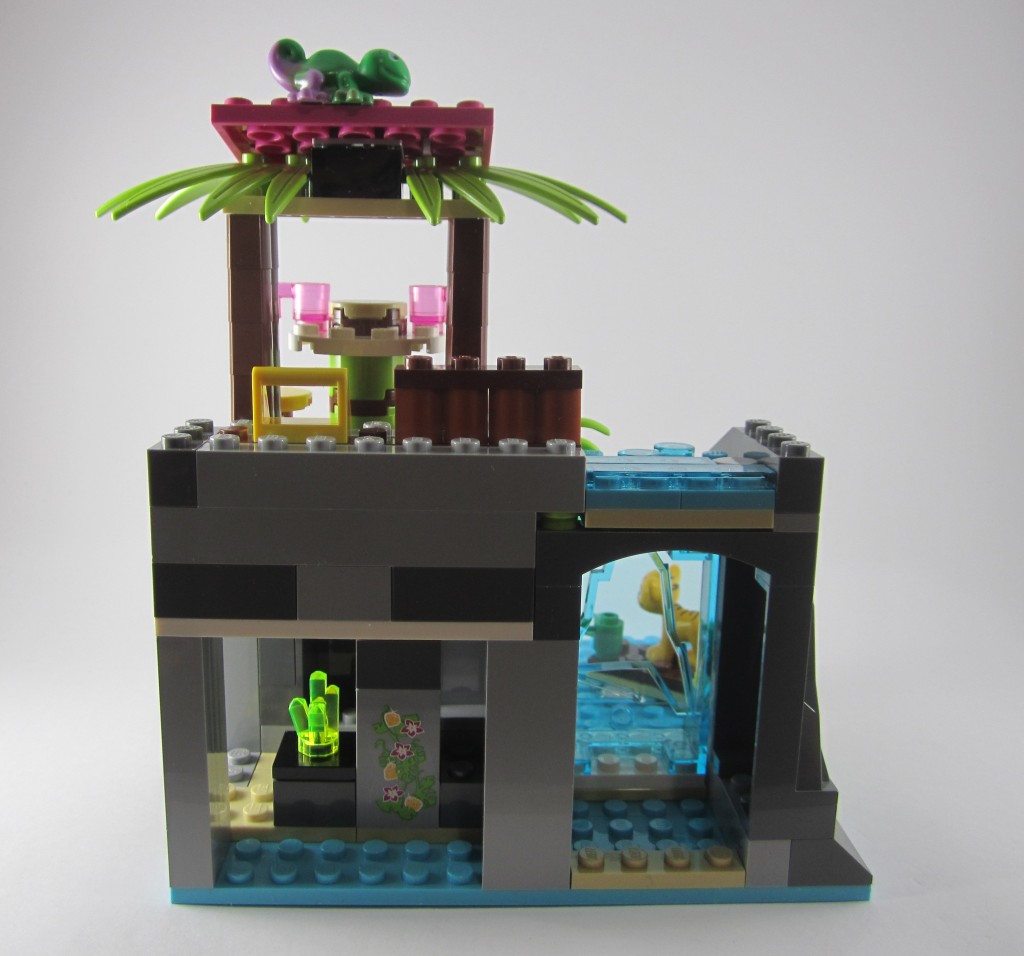 Here’s a look at the the build from the back, which lets you get a better look at the little cave. The cave is an odd feature of the set, but I guess it makes sense leaving the cliff’s interior hollow to save on parts. With the focus on jungle rescue and not exploration or mining, it surely seems like a mighty strange thing to have a crystal hidden in there. I say that as an adult, though. Younger me would flip out at the discovery of a  secret crystal cavern.

I didn’t use all the stickers included, as I felt like some of the flowery ones were a little too girly for my tastes but I stuck one inside the cave to give it a little bit of extra detail.

One of the play features of the set is the waterfall, which you can slide into the cave thanks to a simple gear mechanism. Doing so allows Olivia access to the cave to retrieve the mystery crystal. It’s a decent play feature and looks kind of cool although if you notice in the gif, it isn’t as smooth and frictionless as I would’ve liked it to be.

The set would be perfectly fine without this mechanism but it’s something nice to have and I’m sure younger kids would enjoy playing with this mechanism over and over again. 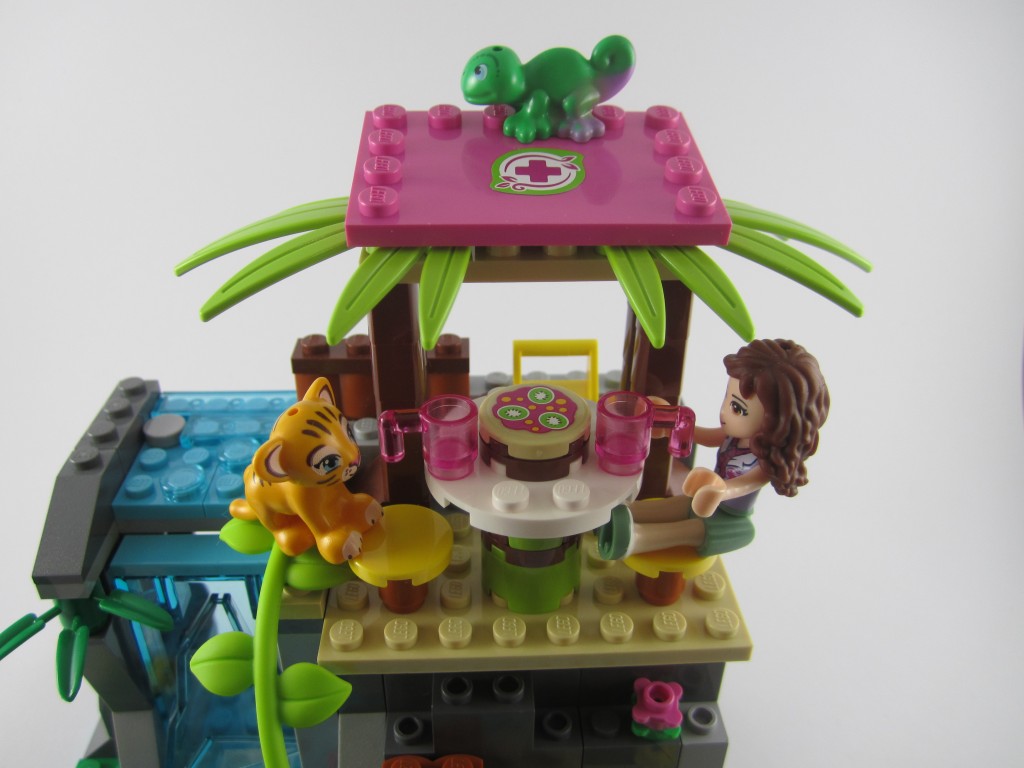 The last area to check out is the makeshift hut which serves as a base for Olivia. Fitted out with two stools and a table which holds a delicious looking (stickered) tropical fruit pizza and two transparent pink cups, the outpost serves to close out the set like a cherry on a yummy cake.

Featuring a roof made out of palm fronds and pink awning which has a sticker of the Friends Animal Rescue logo, it also serves as the chameleon’s roost. The outdoor seating area is a little precarious, located dangerously close to the edge of the cliff that if an accident should occur, you can probably rename the set Jungle Fall Rescue. Nevertheless, I’m sure Olivia will be extra careful when she hangs out at the hut with the rescued tiger cub. 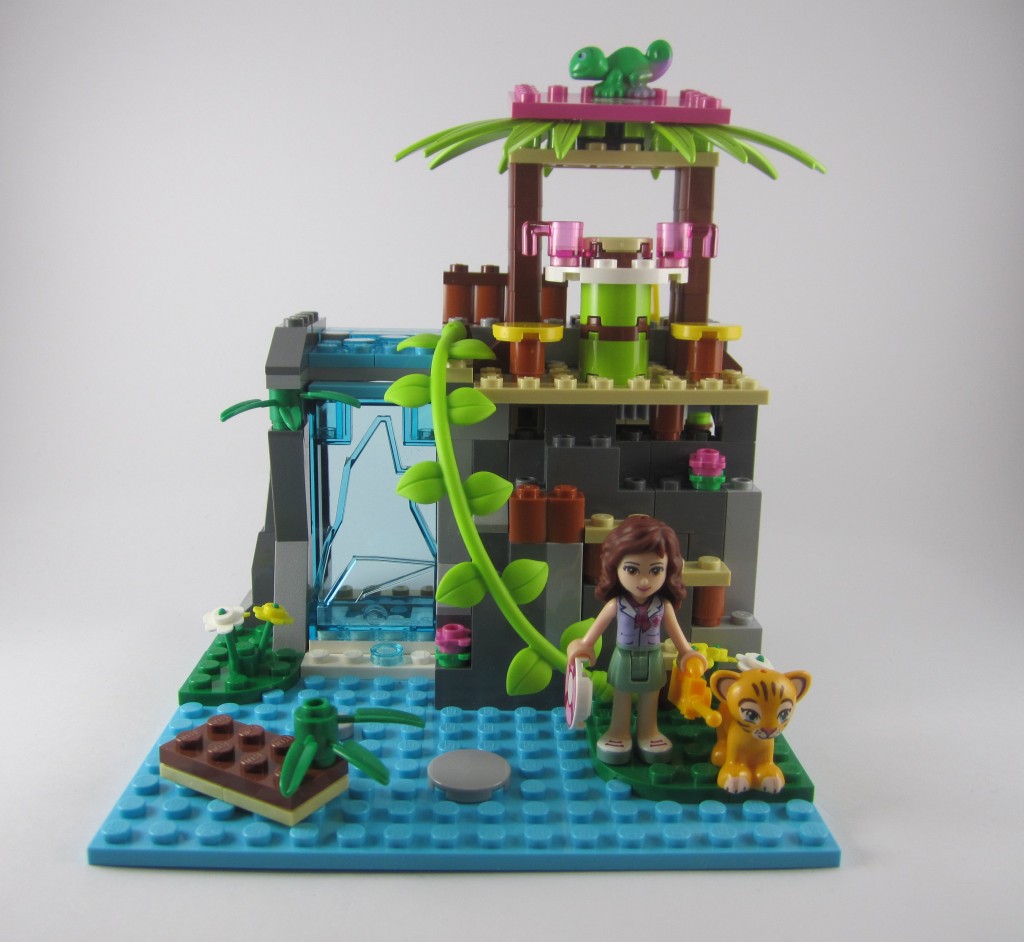 Final Thoughts: For a $30 set, Jungle Falls Rescue packs a whole lot more value than its price tag would suggest. I very rarely come across sets that tick so many of the right boxes, but Jungle Falls Rescue manages to impress on all fronts, from displayability, playability to parts selection. We get two vines! LEGO was kind enough to include a spare. Value!!!

The set is really nice looking and functions well as a standalone display piece thanks to the vignette concept being executed to perfection. The details packed into the waterfall, cliff and hut all come together harmoniously to strike a great balance of size and aesthetics.

I have always been partial to structural LEGO sets as opposed to vehicular ones, and I can confidently recommend this set to anyone who’s looking for fantastic value and/or a cool looking display model if you’re able to look pass the minidolls. Even though this is a Friends set, the level of girly-ness in this set is kept to a minimum which should appeal to more people.

If you have $30 bucks to spare, pick this set up. Even at RRP, Jungle Falls Rescue is a great deal.

Thanks for reading! It was a blast finally being able to squeeze in a Friends set. I’m looking to start mixing up the sets that I review to spice things up a little.

Who knows what I might review next? Hint: It rhymes with Lasso Moot.