I was very fortunate to be given the opportunity to review the upcoming Goofy, Pluto and Donald Duck Brickheadz ahead of their release on the 1st of February 2020.

LEGO’s Brickheadz theme has been the most hit & miss theme, with its unpredictable release schedule, and the seemingly limited numbers of Brickheadz produced, which can often mean that Brickheadz get retired very very rapidly.

In 2018, LEGO released the Mickey and Minnie Mouse Brickheadz, which sold out really quickly and were never restocked, making them one of the most sought-after Brickheadz due to the artificial rarity imposed by LEGO.

The Goofy, Pluto and Donald Duck Brickheadz fit in the same mould, under the subtheme of “Mickey Mouse & Friend”, so if you’re a fan of all things classic Disney, you might want these on your radar.

Special thanks to LEGO for providing these sets for review purposes. 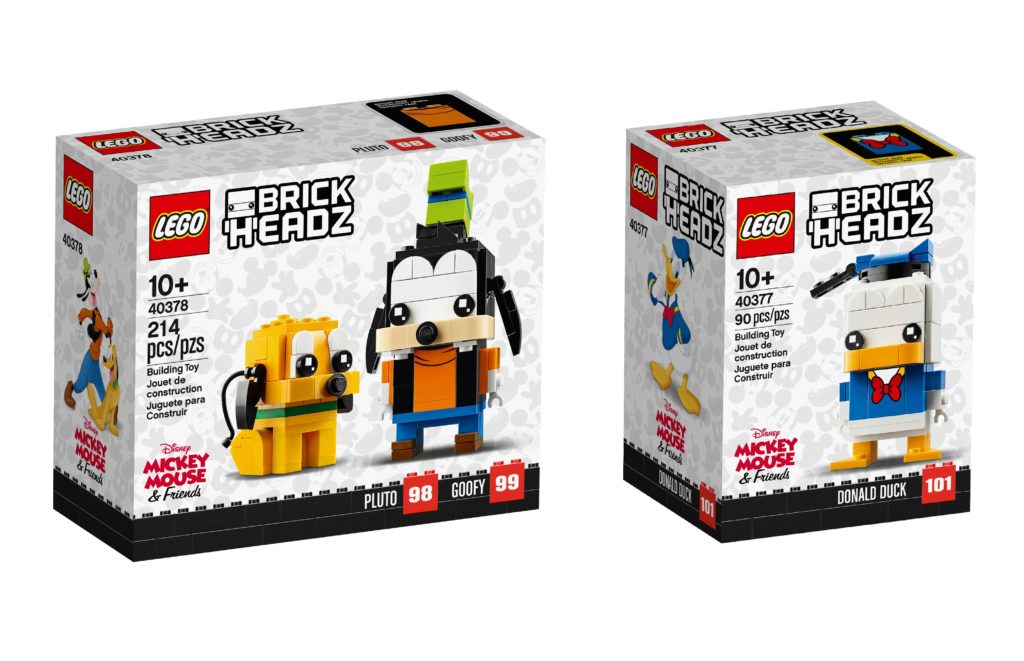 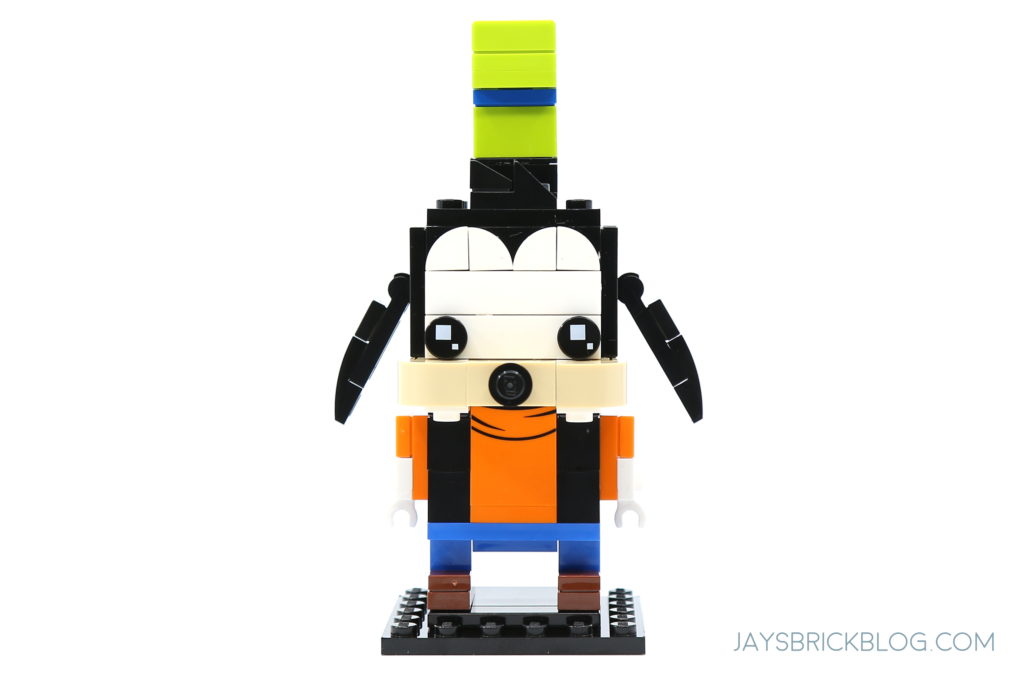 Let’s take a look at the first pair, Goofy and Pluto. Goofy’s LEGO star-power has never been higher after finally making an appearance in the Disney Train and Station last year, and LEGO are keen on capitalising on Goofy-mania by releasing a Brickheadz in his image.

Goofy’s uh, goofy (?) expression is captured quite well, with his large thoughtful eyes, and signature orange jumper, along with blue pants. 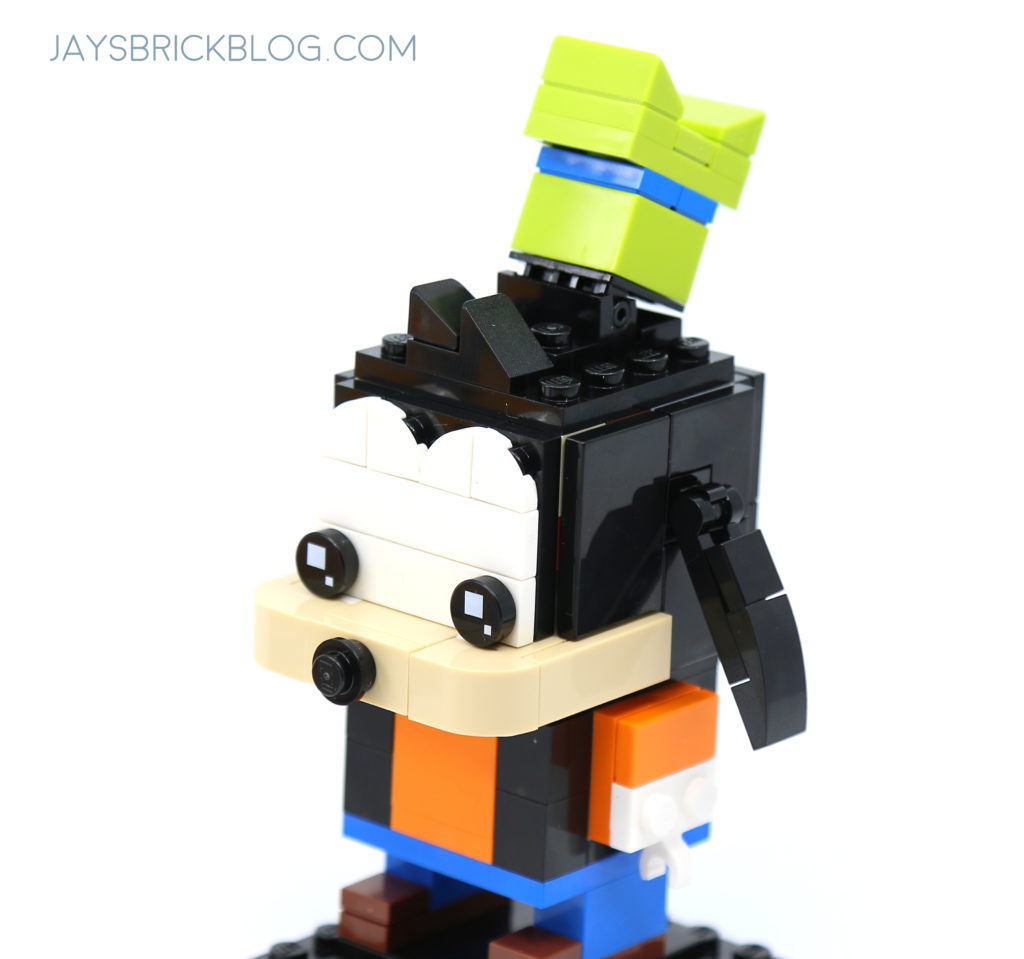 Goofy’s prominent features such as his snout and tall head represent a bit of a challenge adapting it to the blocky Brickheadz format, but the use of negative space, and making Goofy’s eyes the focal point of the face is a great solution to that problem.

His smout also protrudes slightly, and I do like the stud for his nose.

Goofy’s tall hat’s shape is a little weird, although it’s nice that its positioned at an angle. 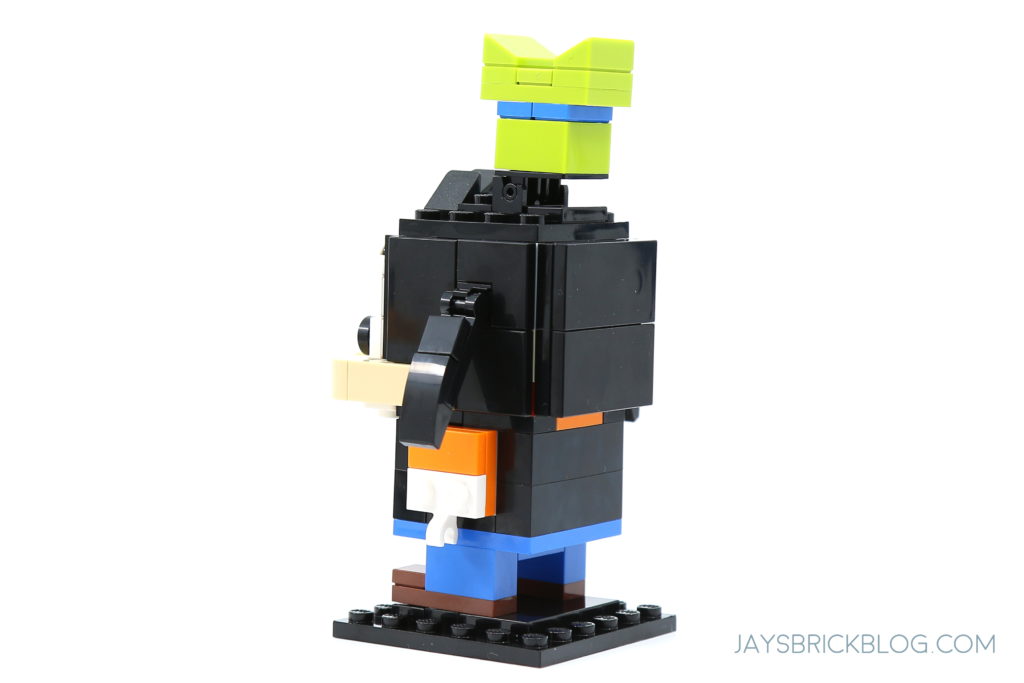 Here’s his back, which is mostly plain. 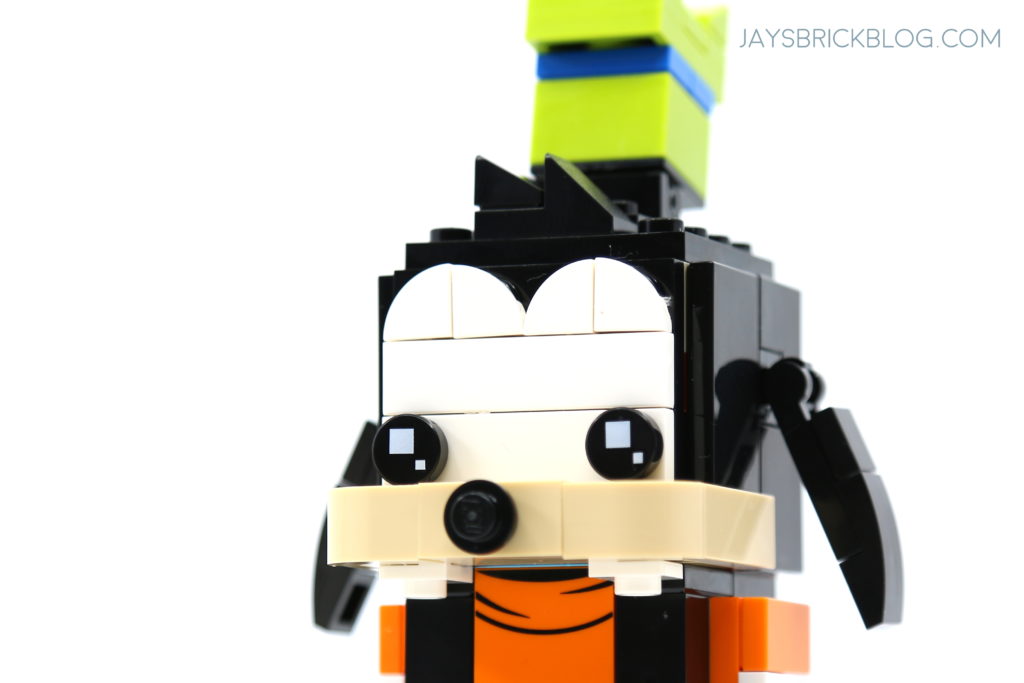 I also love that they captured Goofy’s canine teeth with the studs, which really ties it together. 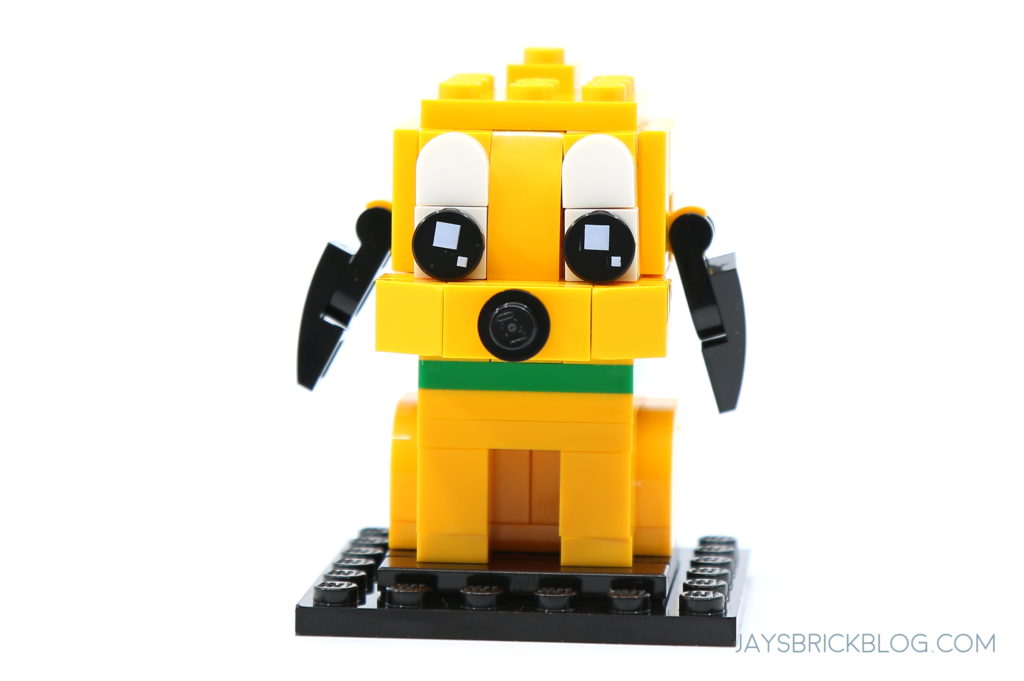 Pluto the Dog also makes his debut as a Brickheadz (and hopefully an actual LEGO dog soon!). Pluto is canonically Mickey’s dog, so his inclusion with Goofy is an interesting choice, but I guess LEGO wanted all the Disney canines together in a set.

Pluto is really cute, looking more like a puppy thanks to his oversized head on a tiny body. He doesn’t look like the lanky dog that comes into your mind when you think of Pluto. 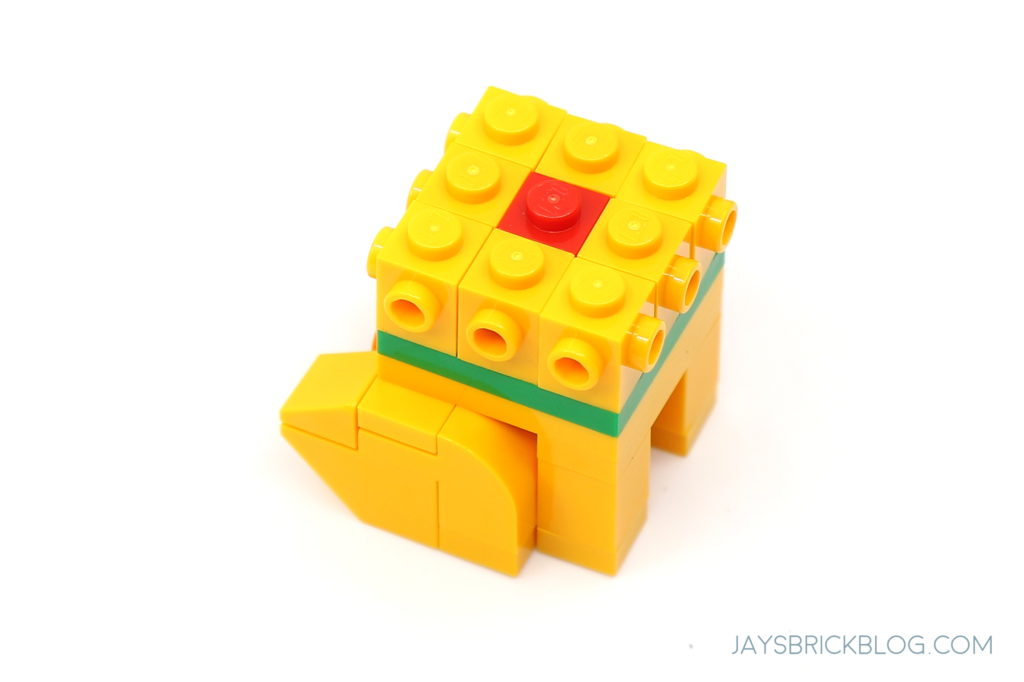 I don’t have a lot of Brickheadz, but I thought it was really interesting to see this red piece in the middle of Pluto’s body. Is it a… heart? 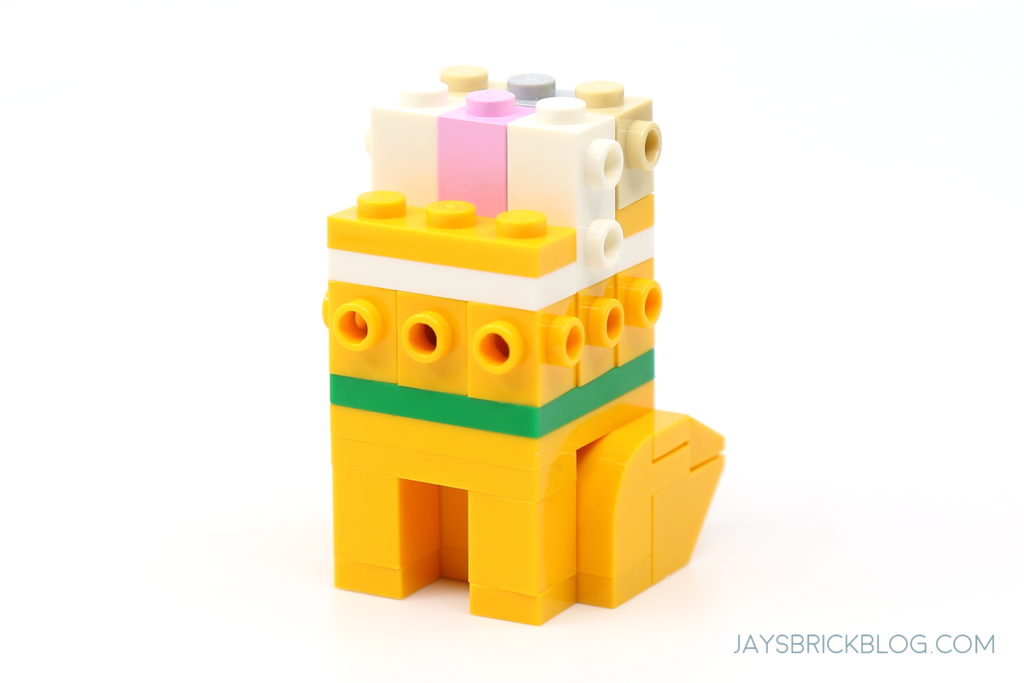 All Brickheadz have pink brains in them, and it’s nice to see this tradition continue even with Pluto’s diminutive size. Is the heart new? Can someone with a lot of Brickheadz let me know in the comments if hearts have been done before? 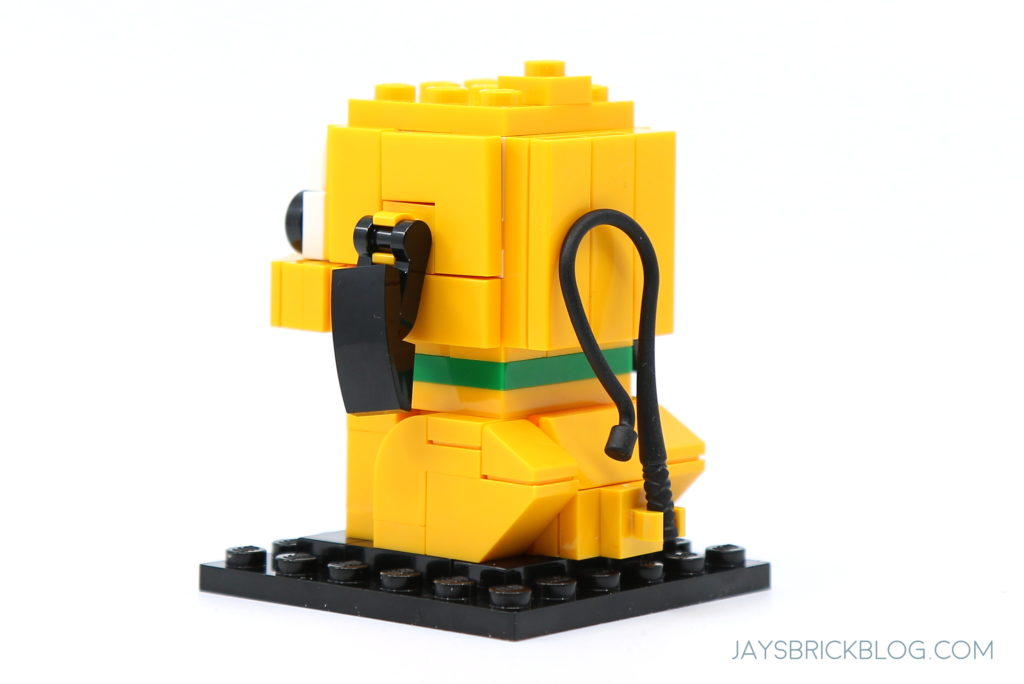 Here’s Pluto from the side and back, where you can see a black whip being used for his tail (similar to Mickey and Minnie’s Brickheadz), and his hind legs in a crouched position. 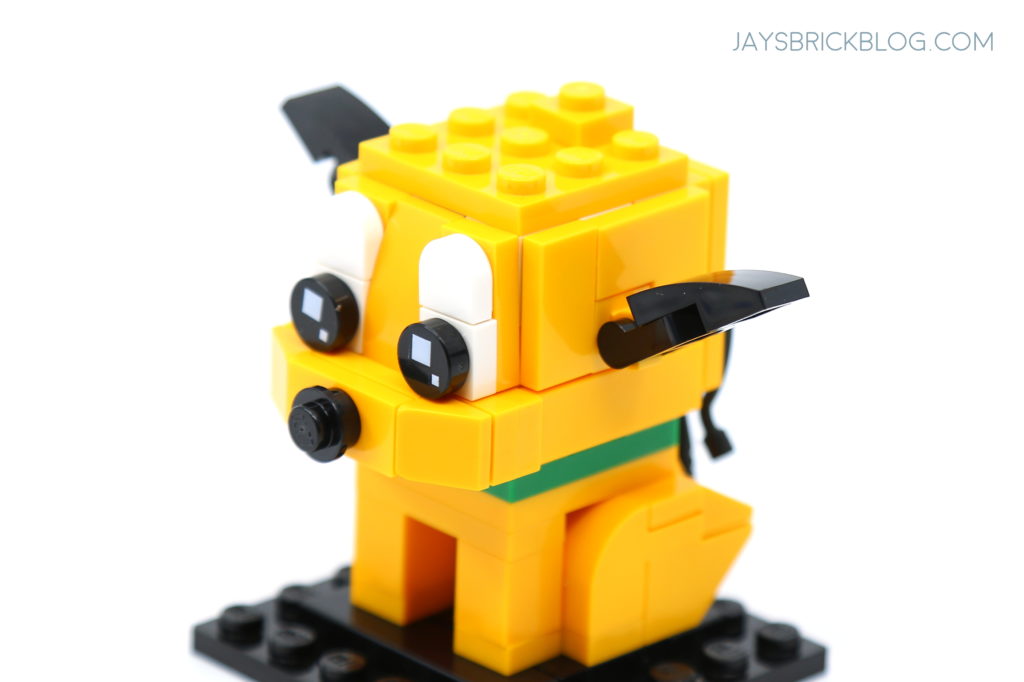 Pluto’s ears can also swivel up and down, which gives him the option of looking rather expressive. 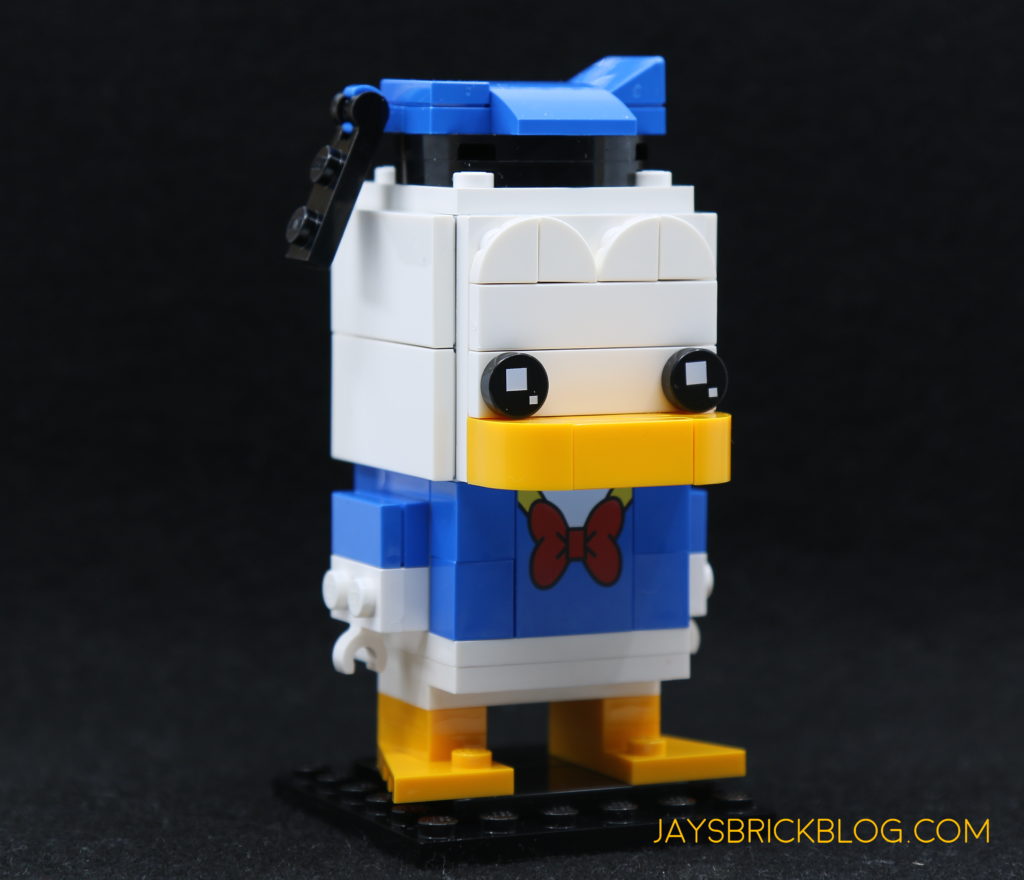 Moving on to Donald Duck, a classic Disney heavyweight character. Like Goofy, Donald’s duck-like shape is a big challenge to adapt into the Brickheadz form factor, but LEGO once again puts contrasting colours to great use.

Unlike Goofy, I felt like they didn’t quite capture Donald Duck’s expressions and features. When I think of Donald Duck, I picture him with his beak wide open with a big smile, given his status as comic relief in old Disney cartoons, which just doesn’t quite come across – with the muted Brickheadz expression. 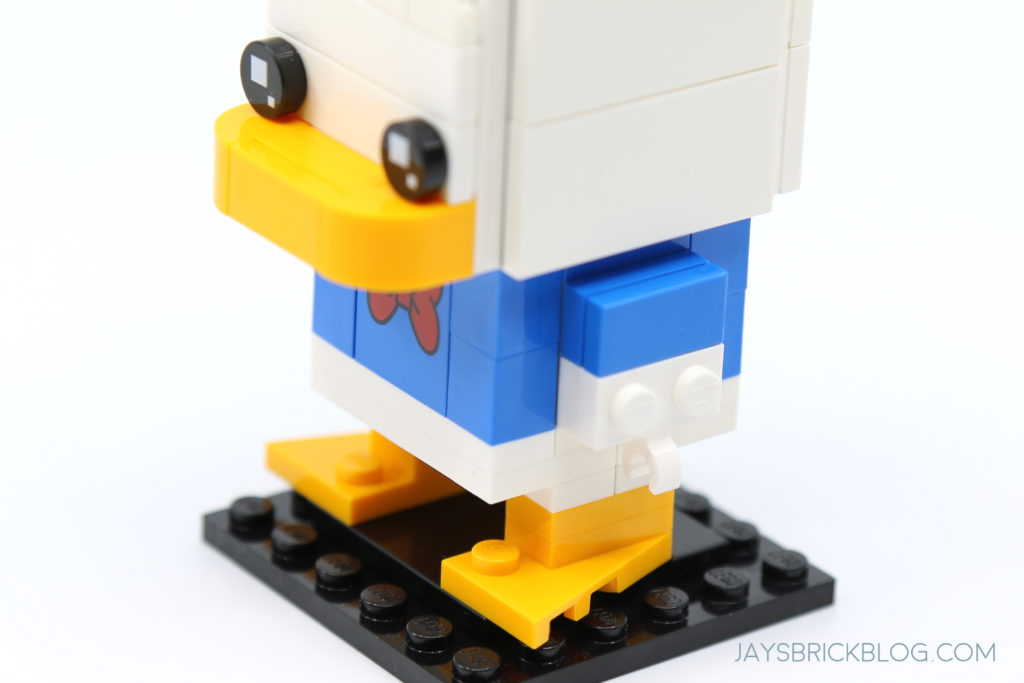 I do like the printed tile for his shirt and red bowtie, and especially his webbed feet which are executed great.

Donald Duck’s bill, which is his most defining feature is a little small for my tastes, and I think if they had made it bigger, I would’ve liked the design more. 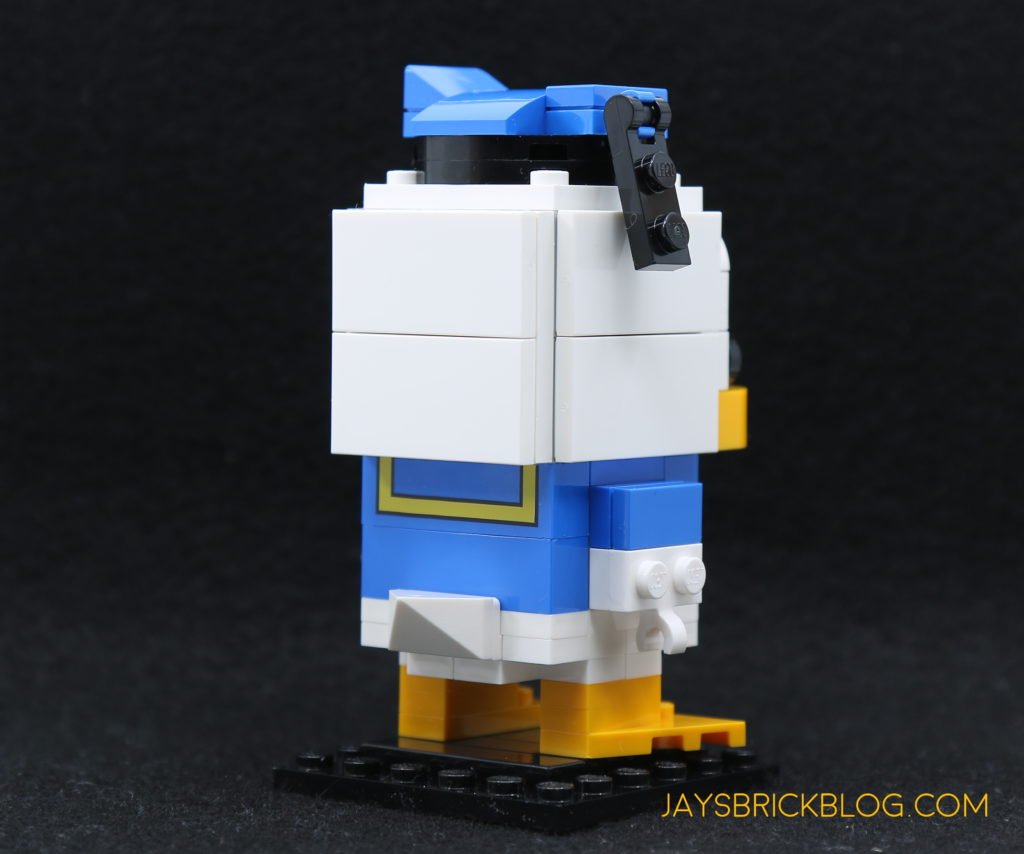 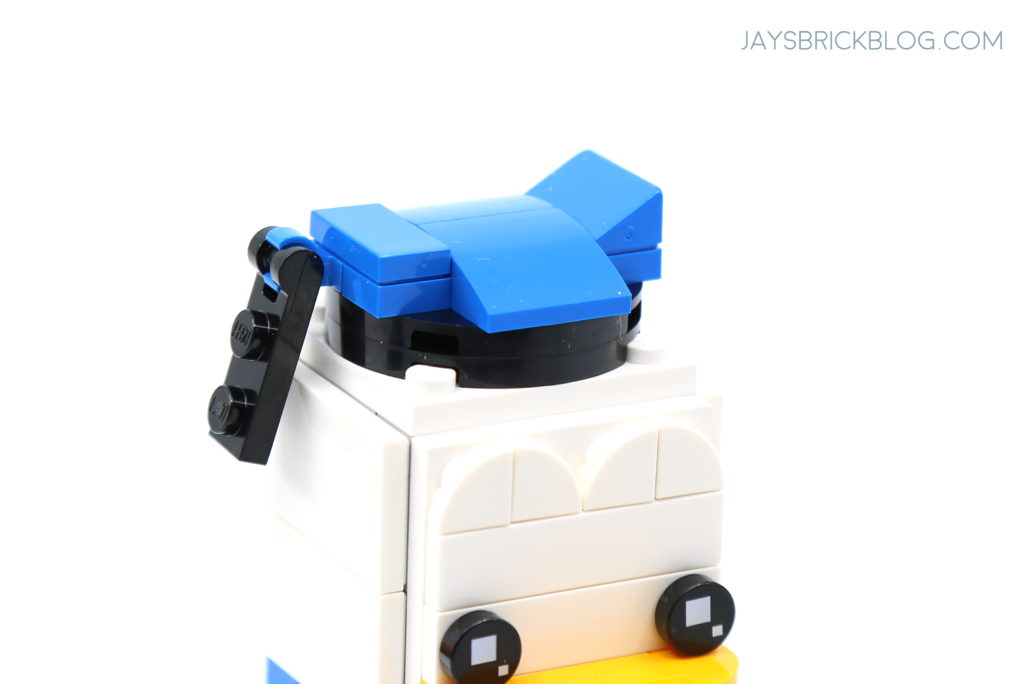 Here’s a look at his hat and back, which has a small printed tile for the back of his collar. 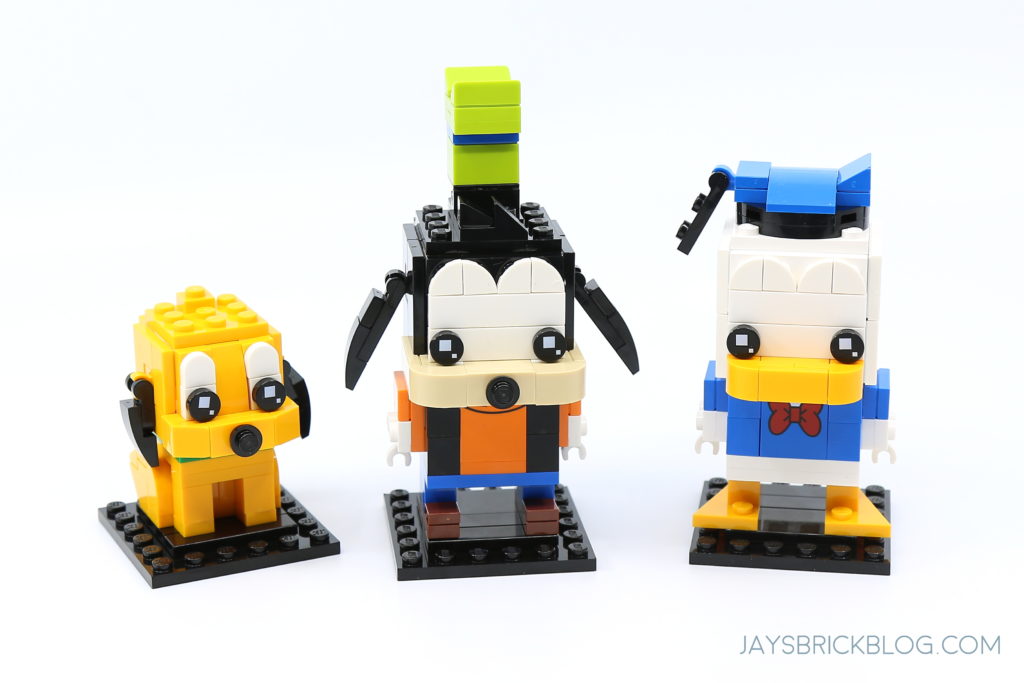 Here’s all three put together, which look great as a whole. I’d say that Goofy and Pluto are the real winners here, for Pluto’s cute factor, and Goofy’s accuracy.

And here’s the entire lineup of LEGO Disney Brickheadz, specifically the Mickey Mouse and Friends branding. As a whole, they look great and if you love all things Disney, and own the Mickey and Minnie Mouse Brickheadz, you’d really want to add Goofy, Donald and Pluto to your collection. 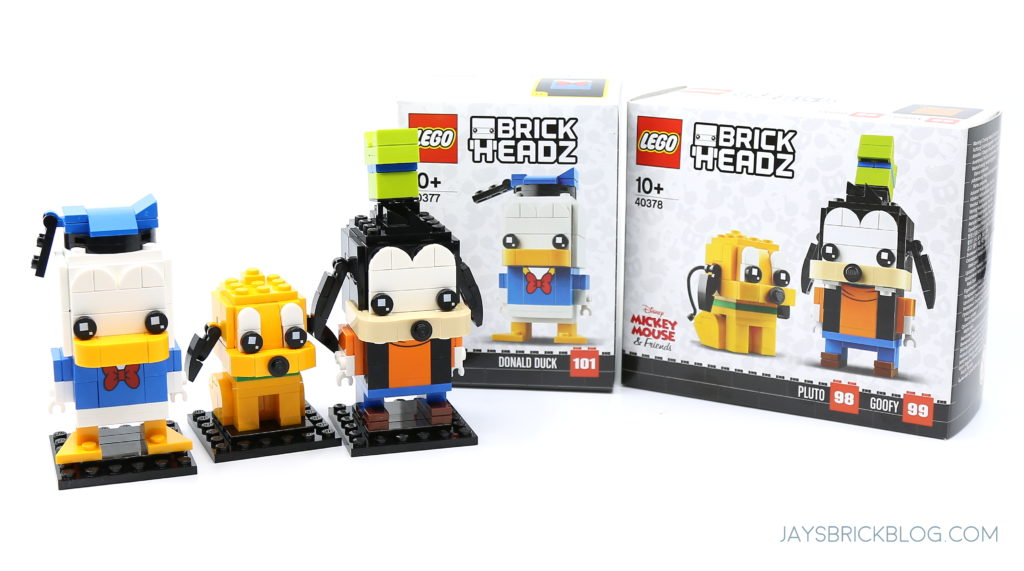 Final thoughts: Brickheadz are such a niche LEGO theme, and unless you’re massive fans of the characters, or you’re a completionist, it’s quite likely that so many of these releases will pass you by.

That said, Goofy, Pluto and Donald Duck are absolute pop culture powerhouses in terms of star-power, and their relation to the rare Mickey and Minnie Mouse Brickheadz means that these will most likely be one of the most popular Brickheadz this year.

If you’re a collector and lover of all things Disney, you’ll be very pleased with these, and should try and buy them as soon as possible before they inevitably sell out and double, or triple in price like Mickey & Minnie. 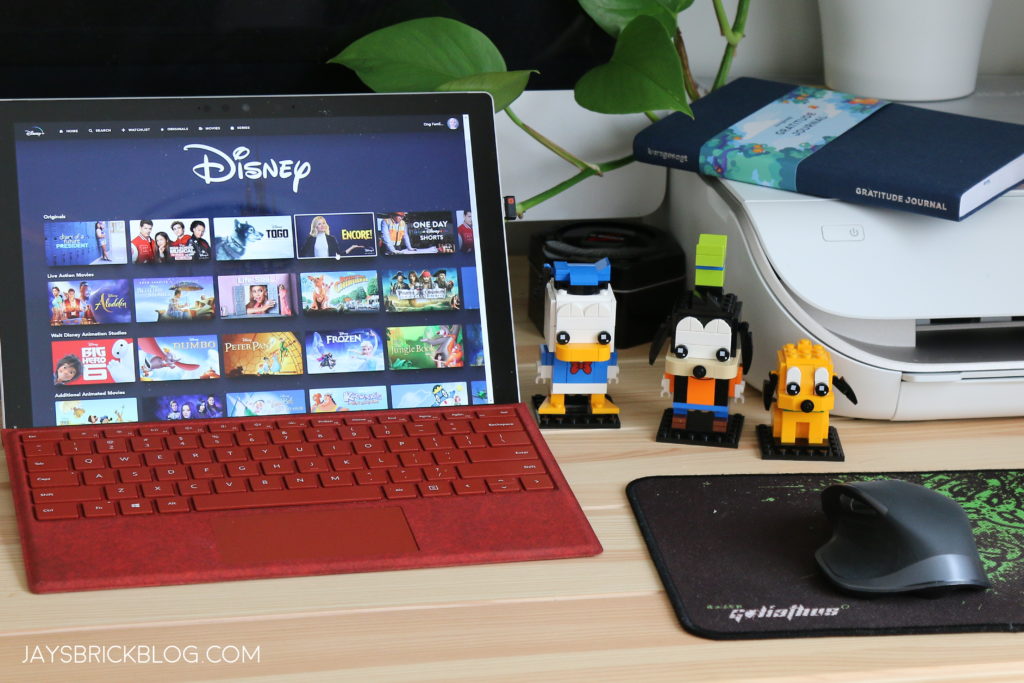 Pluto and Goofy are the definite winners here, and seeing them on display on my desk, they make for great desk ornaments that aren’t that obstrusive or look too kiddy.

I’d recommend getting the entire set, mostly for the love and nostalgia of Disney, and because they’ll likely sell out incredibly quick, so hopefully LEGO are a bit more generous with stock levels.

If you plan on getting these, I wouldn’t hesitate at all, and keep an eye on LEGO.com or your local LEGO store when they release on 1 February 2020.

The Donald Duck, Goofy & Pluto Brickheadz will be available for purchase from LEGO.com, your local LEGO Brand Retail Store or independent toy stores from 1 February 2020 onwards.

Special thanks to LEGO for sending these sets for this review.

Thanks so much for reading! Hope you enjoyed this brief review on the new LEGO Duplo, Goofy and Donald Duck Brickheadz.

Let me know in the comments if you’re a Brickheadz fan and if you’re planning on picking these up when they drop!