After getting acquainted with the Fire Mixels better known as the Infernites in my previous review, we’re going to take a quick look at the next set of Mixels from Series 1, the Rock-themed tribe that call themselves the Cragsters.

The Cragsters are a boulder-like race of Mixels who specialise in mining and delving under into the depths of the Earth where they feel most at home. These industrious Mixels are boisterous, rough and love nothing more than to smash, dig and tumble around for enjoyment. 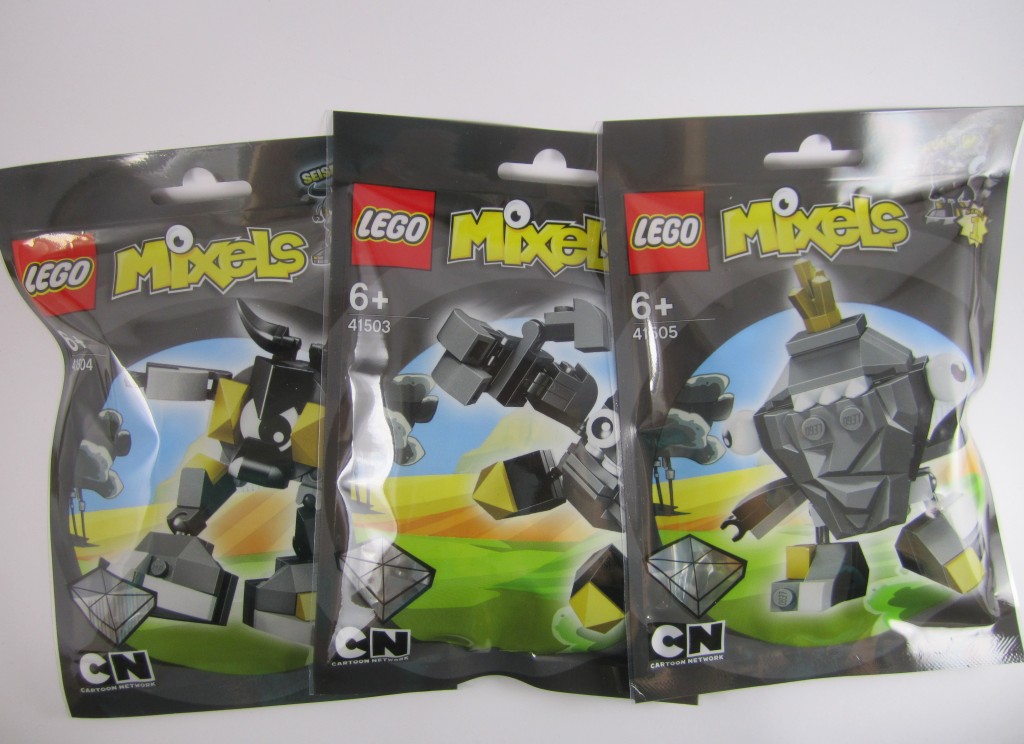 To be honest, my very first impression of the Cragsters was pretty underwhelming as I instinctively assumed that they would be the most boring out of the bunch because of their drab colours. I have never been more glad to be wrong and I was happy to discover that underneath their craggy exteriors, the Cragsters happened to be one of the most charming Mixels in Series 1. 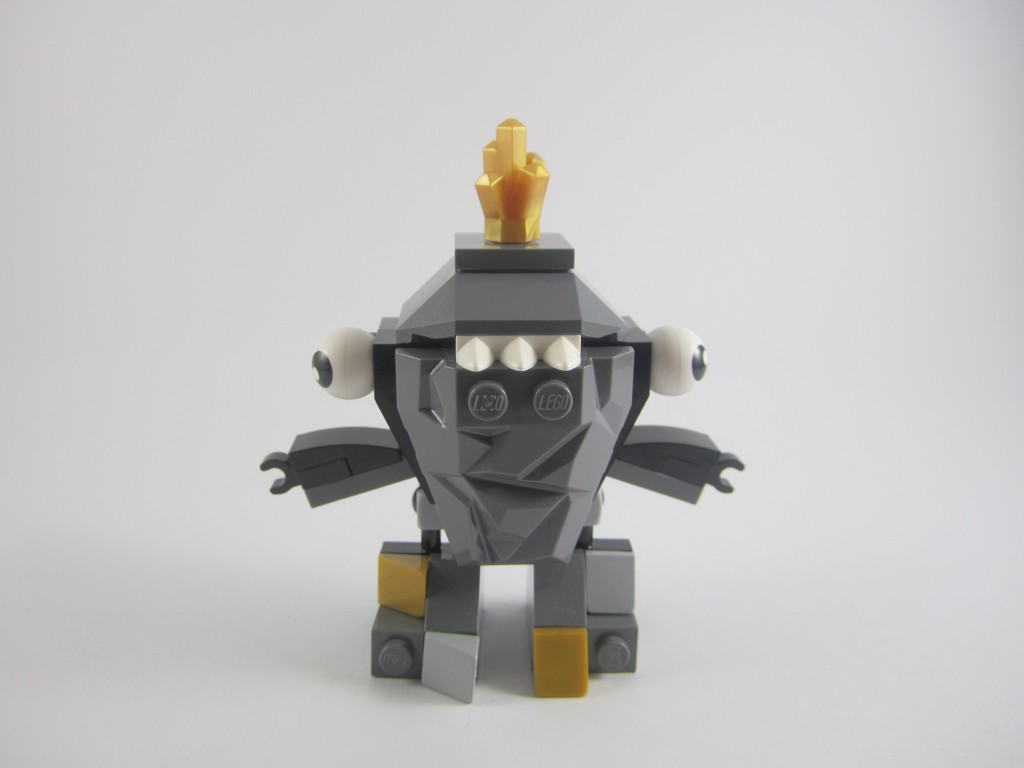 First up is Shuff, an adorable pebble-like bipedal creature that looks all kinds of goofy. Shuff could probably pass off as an unassuming stone if he tucked in his arms and legs and kept very still. His head and body are one single entity and his cuteness level is amped up because of the way his bulbous eyes stick out from the sides of his body/head.

Perched proudly on top of his head is a trophy-like gold crystal, which further accentuates his silly yet lovable appearance.

Shuff isn’t the most articulate of mixels, but he has a simple, juvenile charm to him. I really like the use of the craggy textures and discreet pearl gold cheese slopes which give him a lot of character. 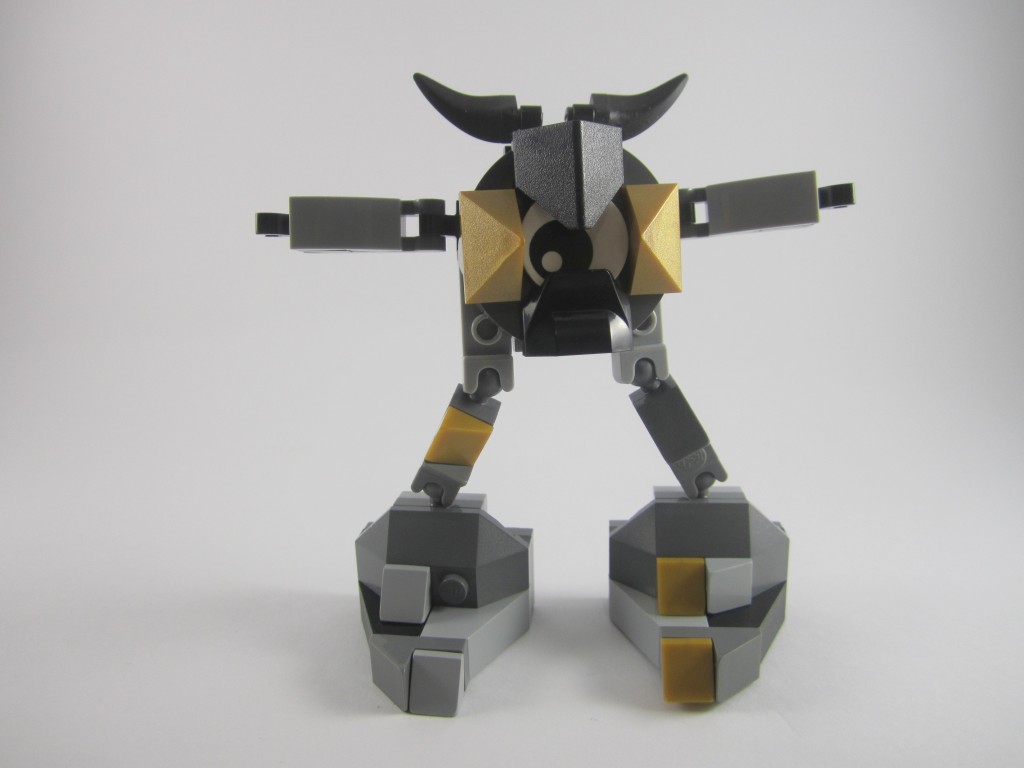 If Shuff is short and stumpy, his lanky counterpart Seismo is the polar opposite,  towering above other Mixels. Seismo is a gangly cyclops Mixel with awkwardly clunky legs which like Shuff, have flecks of gold in them.

His lone eye is nestled in between pointy rock and gold edges and is enhanced by the black “shark tooth” pieces on top of his head which could probably pass as horns or expressive eyebrows. 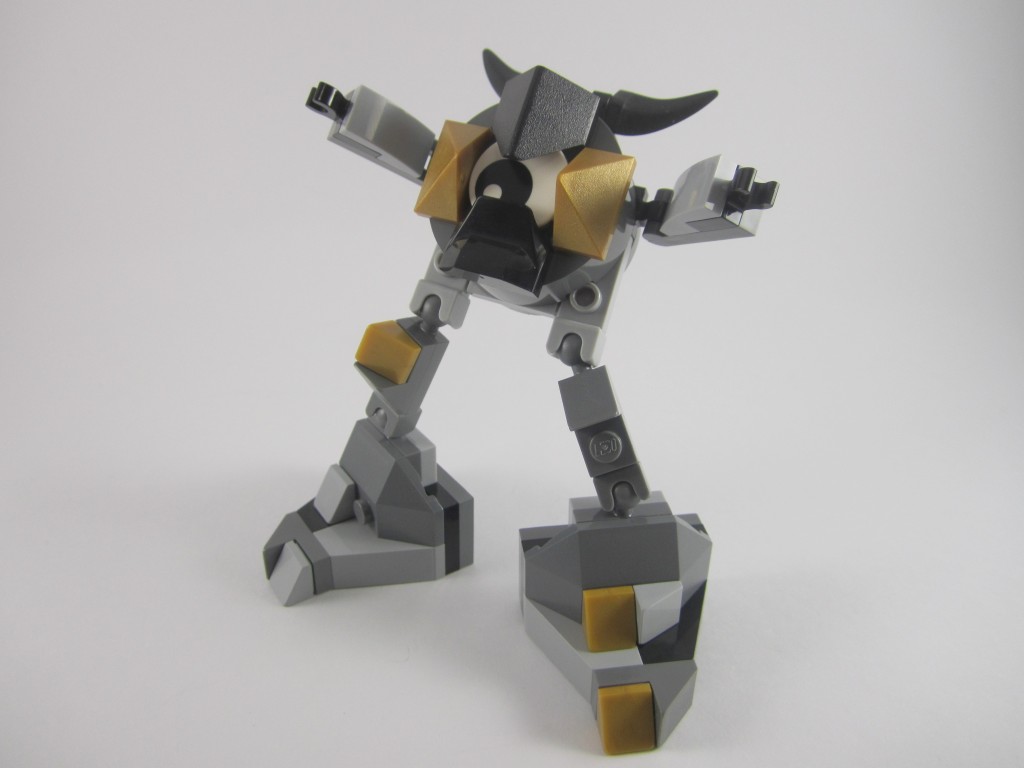 His unique look and singular eyelid makes him stand out (and up!) from the rest of the Mixels in a great way and I really enjoyed the numerous way that you could pose him, thanks to the double joints that make up his massive legs. True to his name, Seismo can start earthquakes by stomping around using his gigantic feet! 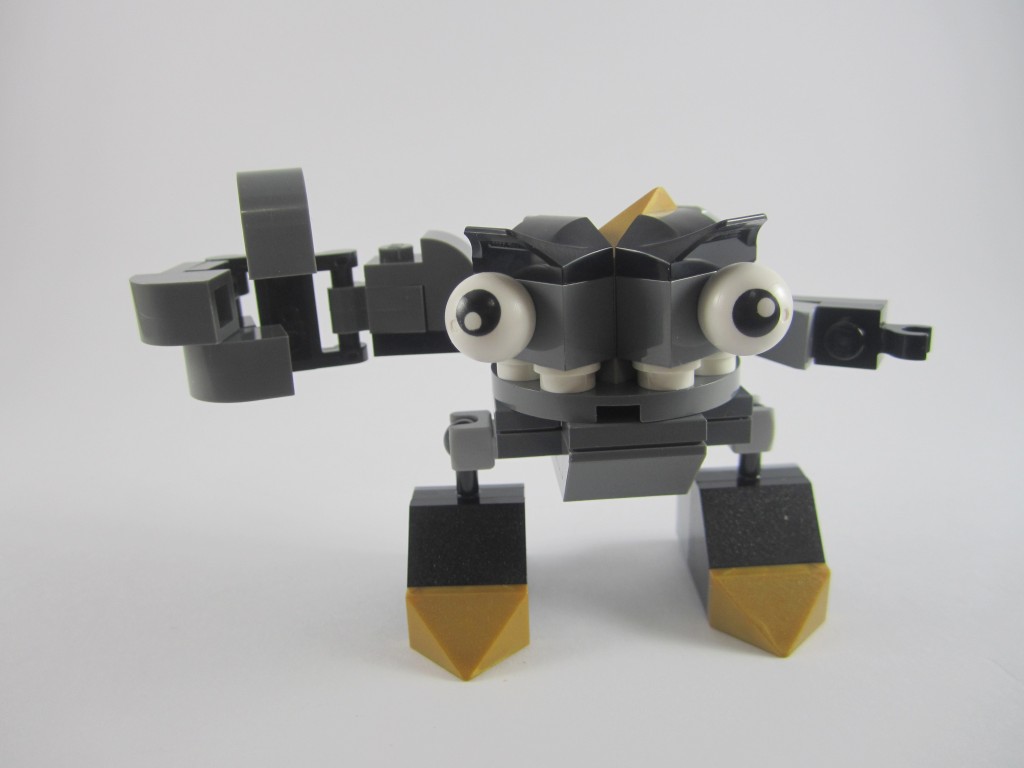 Rounding up the trio of rock monsters is Krader, an extremely comical looking Mixel that has the misfortune of being both flattened and wildly disproportionate. Krader is the leader of the Cragsters tribe and curiously reminds me of the Pokemon, Geodude.

Krader is ridiculously strong thanks to his oversized right arm which comes in handy when he needs to punch holes in the ground. His massive right arm bears a striking resemblance to Fiddler Crabs, giving him a really edgy look that young children will no doubt appreciate.

Another neat thing about Krader is that his entire upper body can be swiveled, allowing him to do a full 360°, storing up momentum to land a mighty punch! 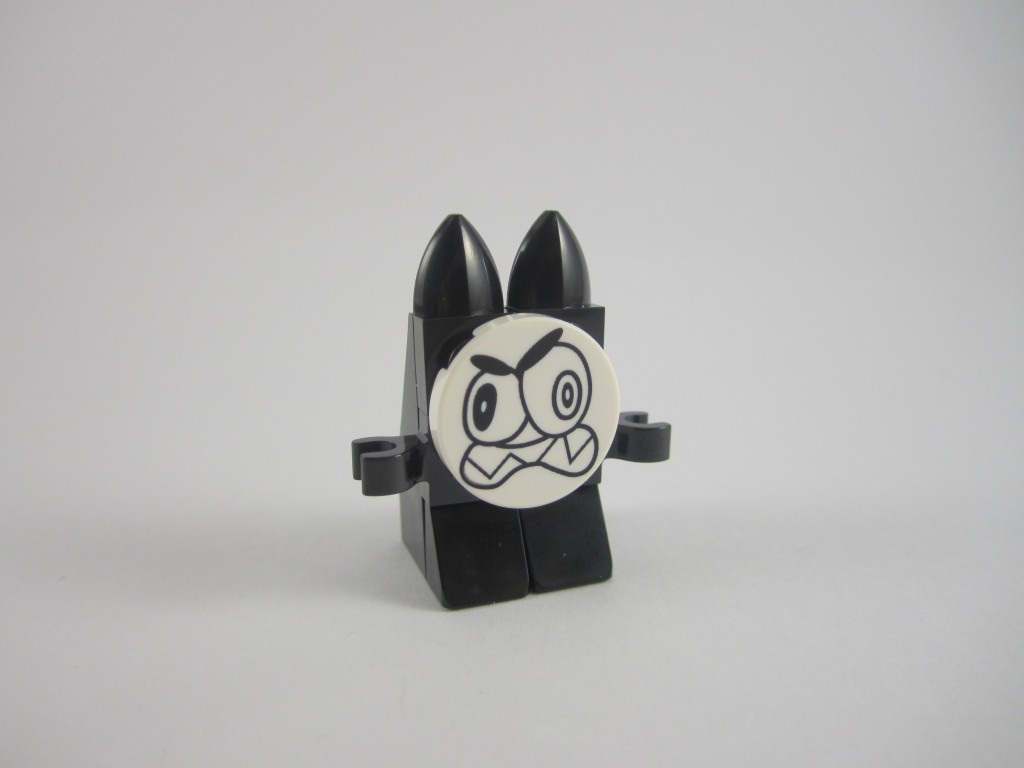 Krader’s bag also comes with his very own Nixel, I suppose to terrorize him. These Nixel builds, while very small and basic are pretty cute – with this one looking very much like a frazzled bunny thanks to his pointy ears. As with all other Nixels, his face is printed on, which is pretty neat. I wonder, could you combine all the Nixels together to form a Nixels Max? 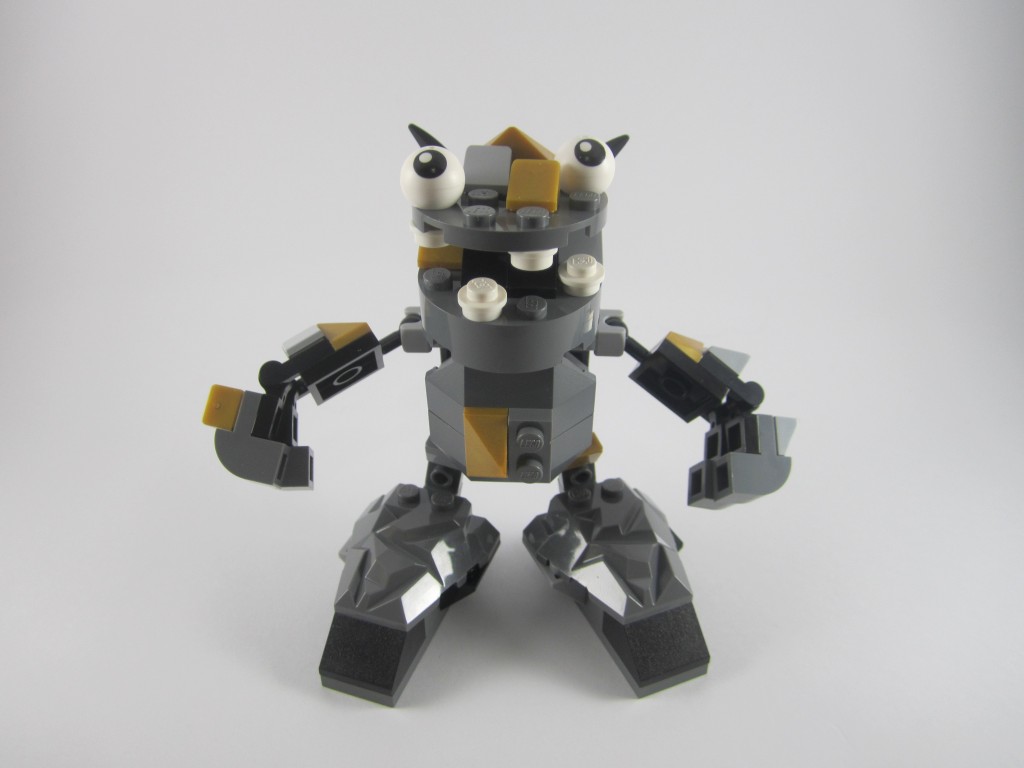 Combining Krader, Shuff and Seismo together lets you form Cragsters Max, a humongous rock monster that is as big as he is ugly. As usual, you’ll be able to find and download the instructions for Cragsters Max on the LEGO Mixels website. My only complaint about this process is that I wish LEGO had created a mobile-optimised website with the instructions instead of having to download a PDF file, which is quite a pain to view on my smart phone.

Cragsters Max was a bit of a letdown, seeing as how I really enjoyed building all three Cragsters which all had very unique, innovative and creative techniques and appearances. Cragsters Max just feels like another bi-pedal behemoth that so happens to have jagged edges and bits of gold sticking out of him. 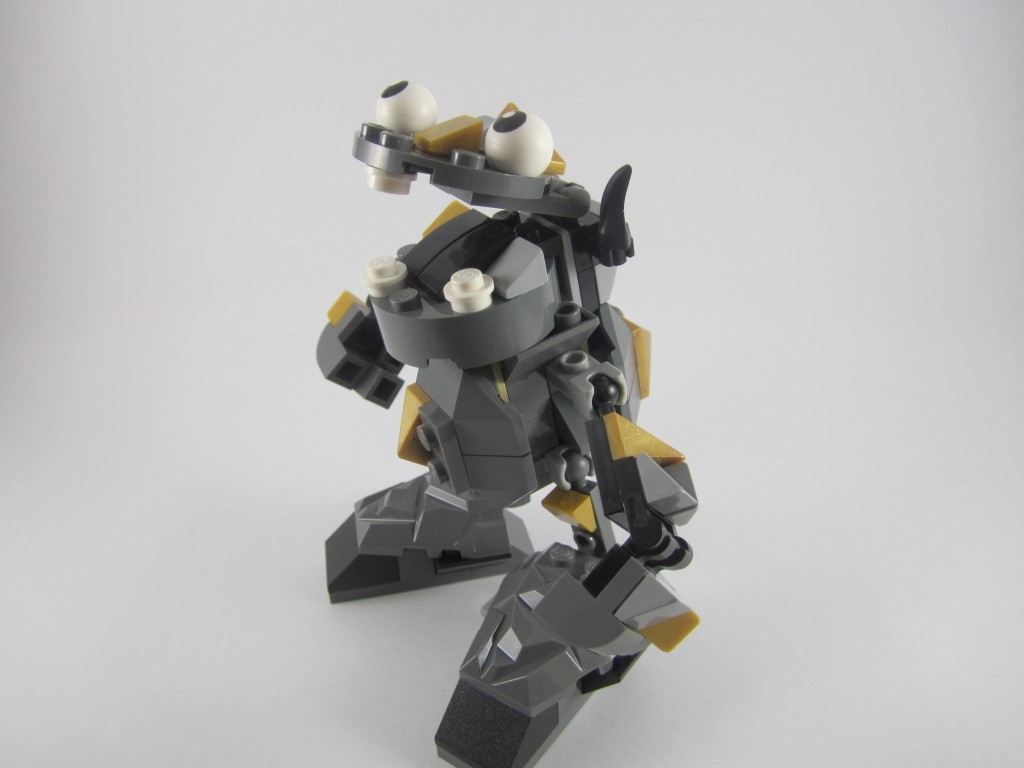 The only part I found interesting about Cragsters Max is his jaw, which you could open and shut which gave him a little bit of playability and character.

That said, I was really surprised by how much I enjoyed putting Shuff, Krader and Seismo together. With their distinct appearances making it extremely easy to connect to their on-screen personalities, I felt like I could appreciate each different Mixel’s unique attributes, much more than I could with the Infernites who were pretty homogenized generic fire creatures.

Don’t be put off by the boring grey bricks, as the Cragsters are quite possibly the most interesting tribe in Series 1 of the Mixels. As always, I highly encourage you to disassemble them after you’re done building with them to allow you to be free to build and design your very own Mixels out of the parts available.

LEGO Mixels Series 1 is available online on LEGO.com or in most toy aisles for $5.99. They’re definitely one of the more unique and interactive LEGO sets that we’ve had in awhile, and I highly recommend collecting them.

Big shoutout to @little.ongs for helping build the

Why.. @lego. Why? Thanks @bricksetofficial for fe