After conquering the box office with The LEGO Movie earlier this year, LEGO has the television screens in their sights as their next medium to dominate. Mixels is a brand new entertainment franchise that is the result of a collaboration between The LEGO Group and Cartoon Network, spanning Mixels LEGO sets, smartphone apps and a series of animated shorts.

The animated shorts are obviously aimed at younger children but I’ve watched a couple of them on LEGO’s Youtube channel and I found them quite entertaining. Usually lasting no longer than 2 minutes, these animated cartoon shorts serve as a window into the world of Mixels, fleshing out each character’s personalities and the funny antics that they get up to. The humour is pretty simple, but that’s not a bad thing at all.

Check out the Episode 1 below

Announced earlier this year, I was very intrigued by the new theme which revolves around these bizarre and colourful characters belonging to different elemental tribes. Mixels are sold in colourful polybags, priced at $5.99 each.

Series 1 featuring the first 3 tribes, the Infernites (Red), Cragsters (Grey), and Electroids (Yellow) and was released in Australia a couple of months ago. As their tribe names suggest, Infernites are fire-type creatures, Cragsters have boulder-like forms and Electroids are zippy electric-based characters, rounding up a very unique bunch of characters. 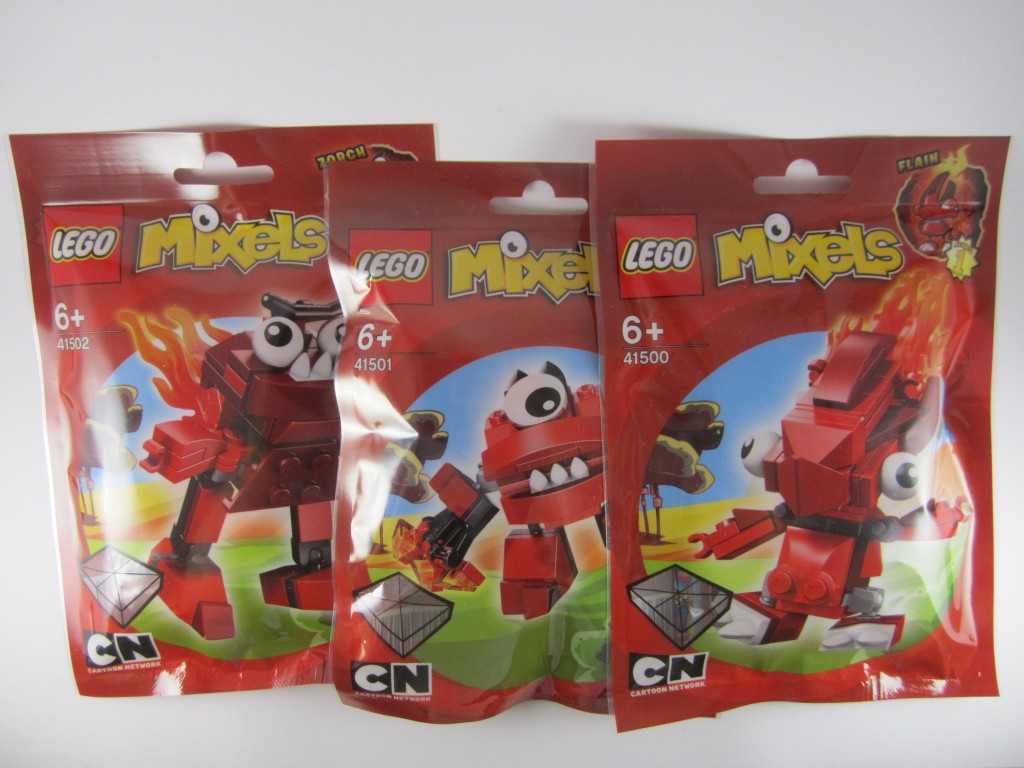 For my very first Mixels review, I’ve elected to focus on the Red Tribe better known as the Infernites!

Each Mixel bag contains an instruction booklet, and a small bag of parts to construct your Mixel character with. Each Mixel is typically made out of about 40-70 parts so they’re pretty quick, fun and easy builds. 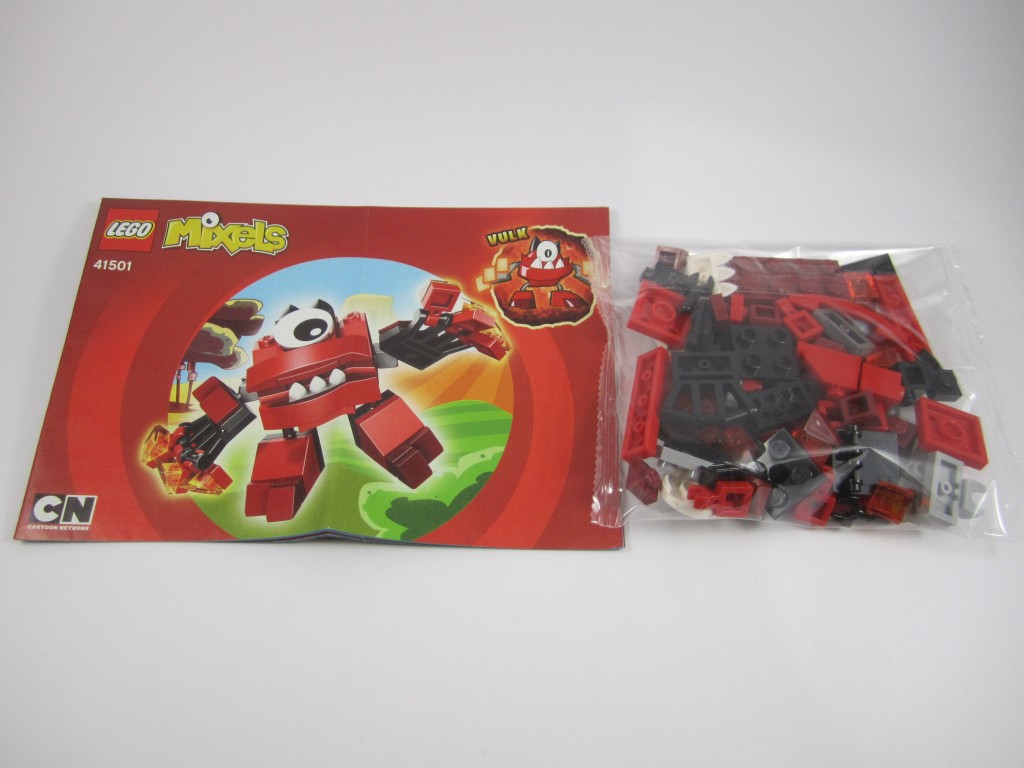 It might surprise you, but I am quite terrified of building LEGO without the aid of an instruction manual. I have this irrational fear of starting a build and not having the right pieces to complete my vision. It sounds pretty silly, but it’s quite a complicated phobia I have (which explains why I don’t build aimlessly as much as I should) that warrants a whole other blog post but the premise is this – I get uncomfortable building without instructions.

To me, the entire aim of the Mixels theme is to construct these fantastically unique and delightful creatures out of a mix of given bricks in each bag. While we’re provided instructions to build each Mixel character, I found that I couldn’t wait to disassemble them as soon as I snapped pictures for this review and see what other strange shapes and forms I could come up with on my own.

I like to think of each Mixel character bag as a miniature puzzle, where the object is to innovate with the pieces you’re supplied in. I think that’s why I really enjoyed playing with my Mixels – I felt safe knowing I could remain within the boundaries of the limited but varied amount of elements and parts included in each bag.

That concludes my little soliloquy on Mixels and creativity, so let’s jump into the review. 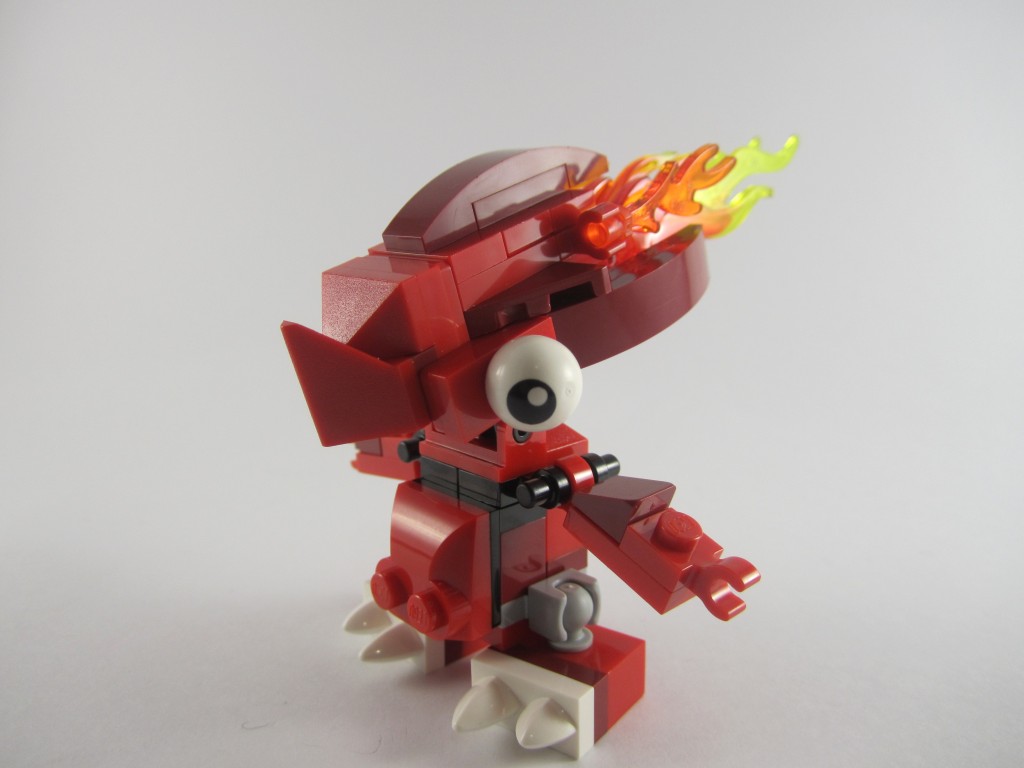 Flain is the hot-headed (literally) leader of the Infernites, known for their fiery personalities and hot tempers. He’s a bipedal Mixel with an unusually large and detailed head which has flames bursting out the end. Flain has a pretty unique look to him, making him look like an alien or brainiac due to his oversized head. His legs can move around freely but his arms can only flap up and down, which is a bit of a bummer as I couldn’t articulate him as much as I would have liked to. 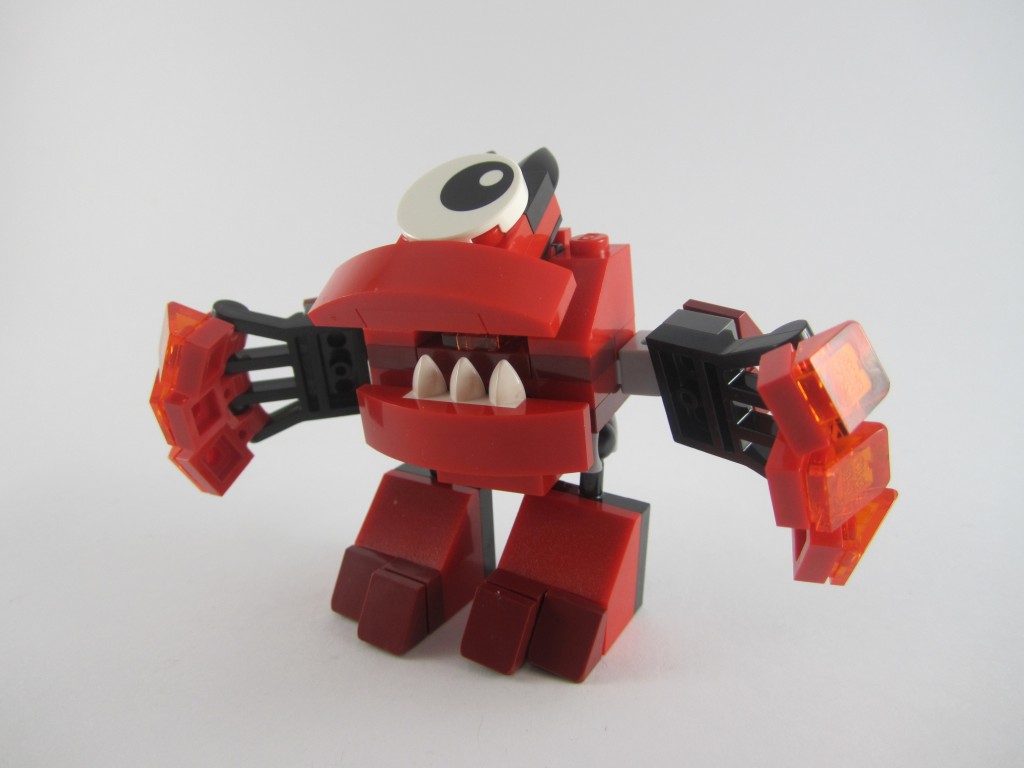 Vulk is a stocky little Infernite cyclops that looks pretty tough and sassy. He has large hands, distinguished by 3 fingers tipped with translucent orange fingernails and stubby legs. His upper half of his face swivels up and down in a very pleasing manner, making it looks he can chomp on stuff. Don’t let his full, luscious lips fool you, I don’t think that he’s into kissing. I quite like the simple  shape and look of Vulk and how articulate his limbs are. 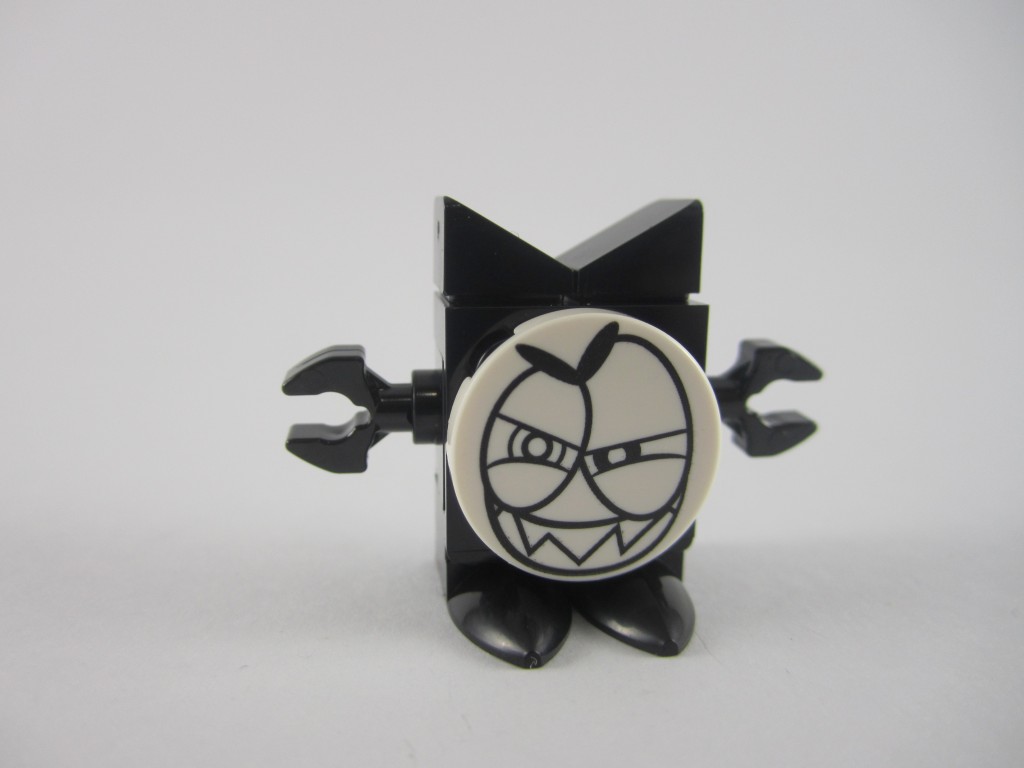 Here’s a strange little creature called a Nixel, which after some investigation I discovered to be the main enemy of Mixels. I like that we got a neat little printed tile. He came in Vulk’s bag and was quite a cool surprise as I wasn’t expecting anything else. 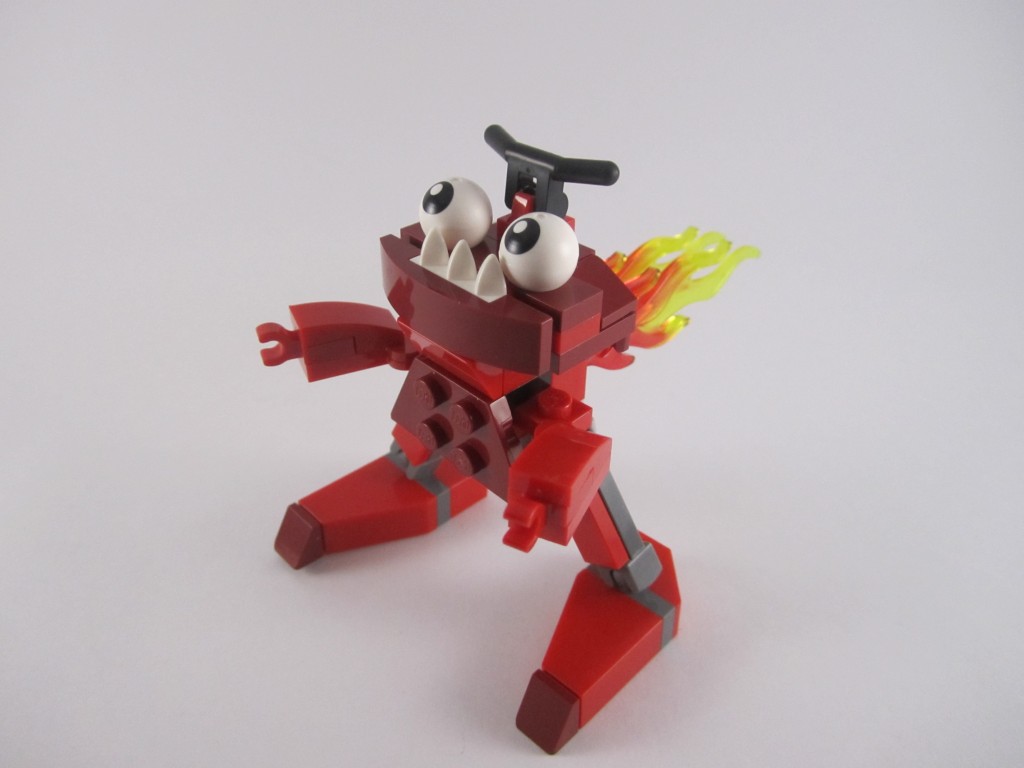 Lastly, we have Zorch who seems to be some sort of jetski-flamethrower hybrid. Seriously, the handles above his beady eyes are really distracting even though I kinda assume that they’re meant to be his eyebrows. Zorch has a goofy looking underbite which adds a lot to his overall charm. He’s got tiny little arms with pincers on the ends and comically oversized pointy feet. In case he’s not crazy-looking enough, he has 2 huge plumes of flame erupting from his back, lending further credence to my theory that he’s some sort of inferno jetski. I absolutely love Zorch’s over the top bizarre look! 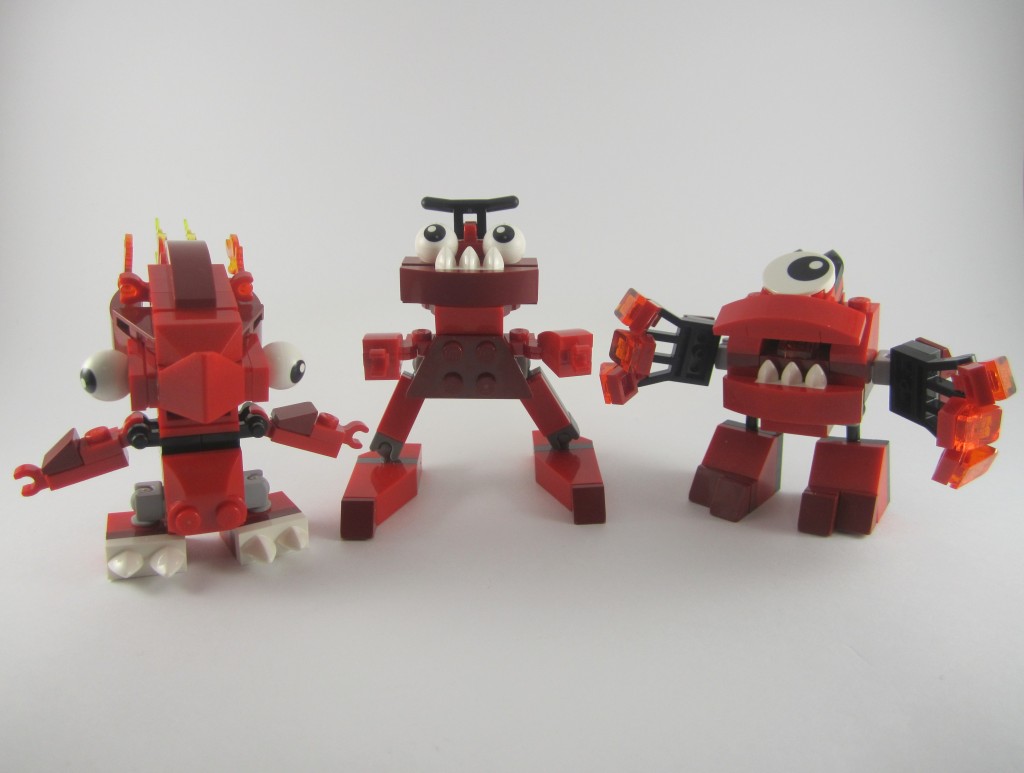 Here are all 3 Infernites grouped together, but that’s not all they do. Apart from taking each Mixel apart to make your very own creations, you can also MAX them together to create a super-Mixel out of the 3 characters from each tribe. Think the Megazord from Power Rangers or Voltron and you have the right idea. 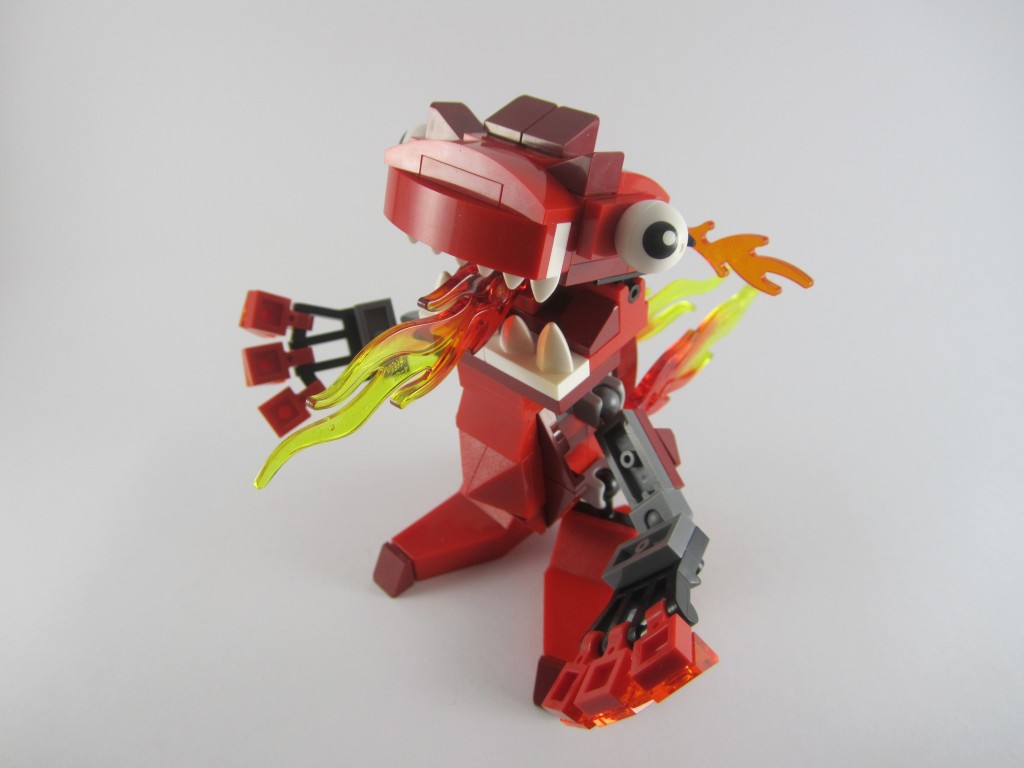 Seeing that it’s a combination of elements and parts from all 3 mixels, I found it to be quite boring putting him together. I would have rather just started building my very own Mixels out of the parts than follow the instructions. 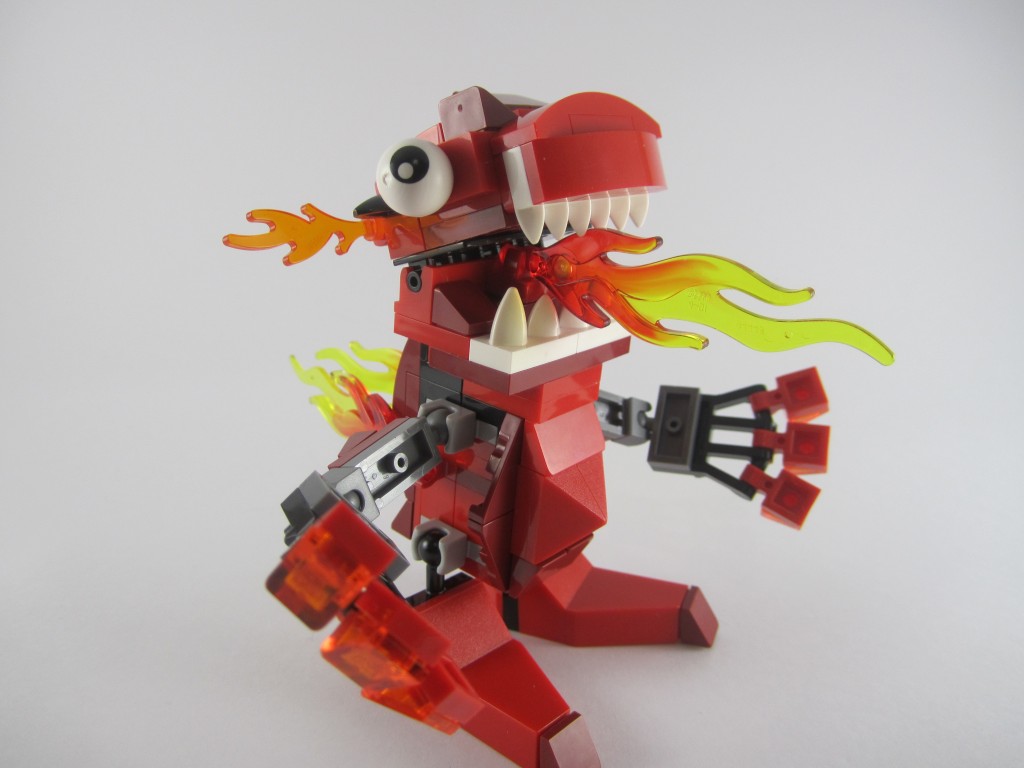 Here’s Infernites Max from another angle. 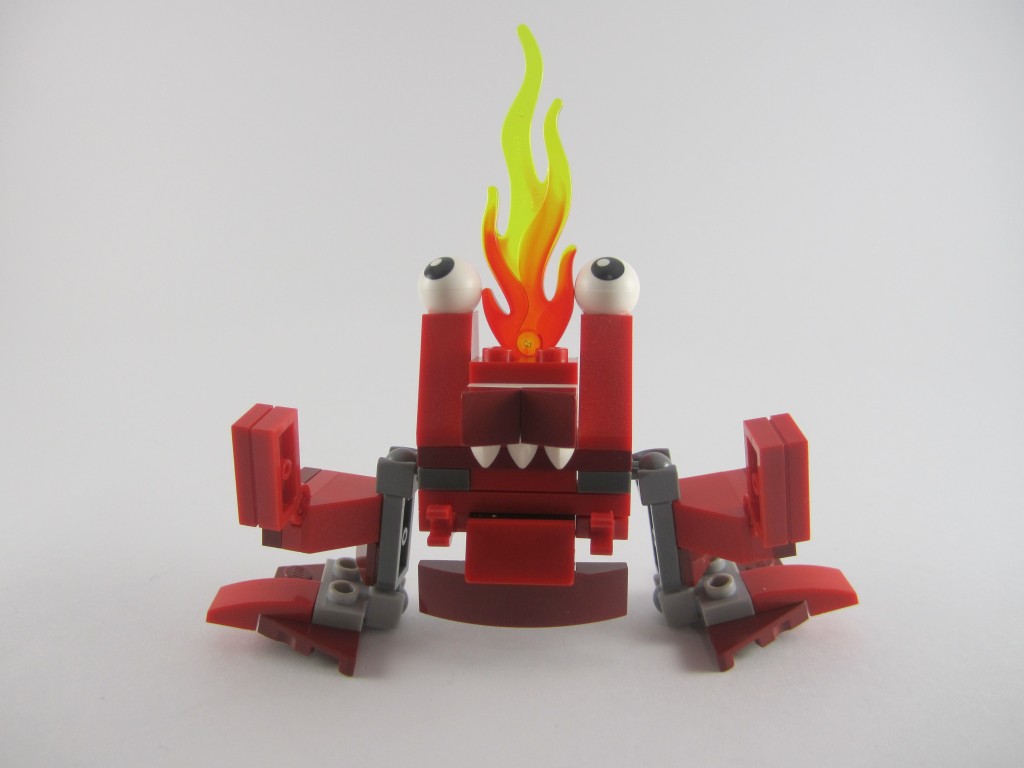 I used parts from Zorch to make this crab-like Mixel which I cleverly named Flamestacean. I really liked the huge and almost limitless combinations and possibilities that you can come up with the parts from each or all three Mixels. I had a wonderful time having a think of the different kinds of shapes and body parts I could make and this is definitely one of the best things about the Mixels theme. 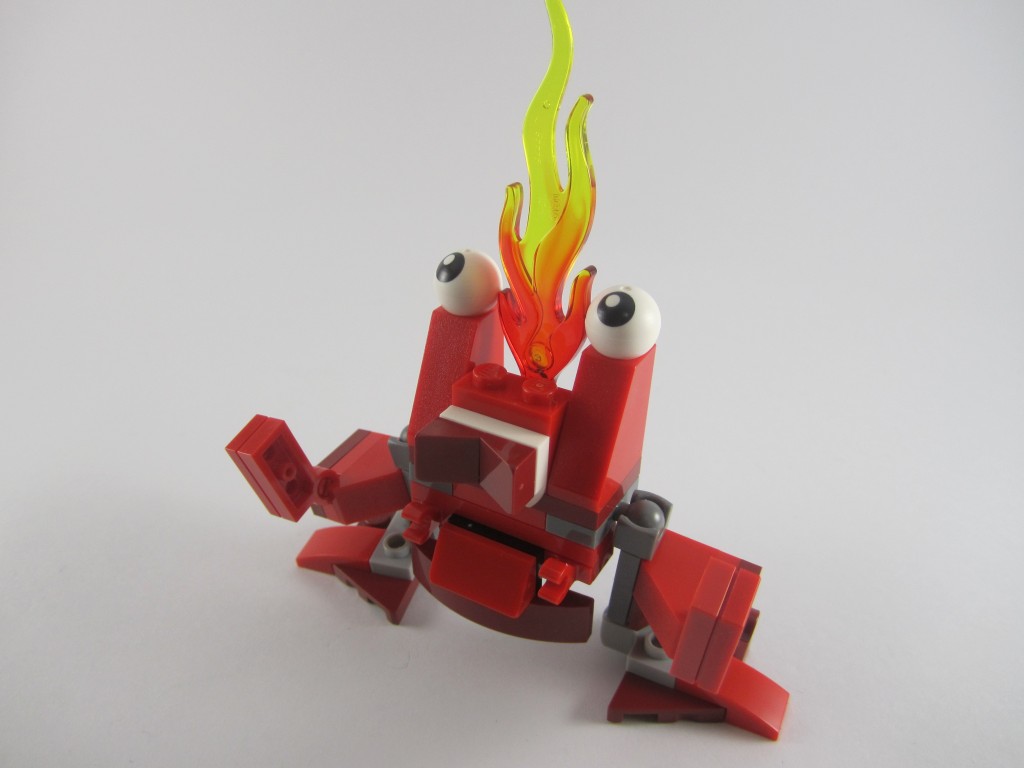 I cannot recommend the Mixels theme enough. They’re affordable, at only $6 per pop (less if you get them on sale) and feel like they’re packed with so much more value than a Collectible Minifigure blind bag which is only a dollar cheaper. You can leave a cup or bowl of Mixels on your coffee table or office desk to build whenever you have a few minutes and quickly take them apart to build some more. As I mentioned above, it’s a nice challenge thinking about what you can make out of a limited pool of parts.

I thought that the Infernites tribe was pretty alright. I wasn’t that big a fan of the colour-scheme as it felt like there was too much red and maroon after awhile. The flame accessories are a nice addition to any collection of spare parts. I also wished that you could reuse the polybags to store away each Mixel after you’re done with them. 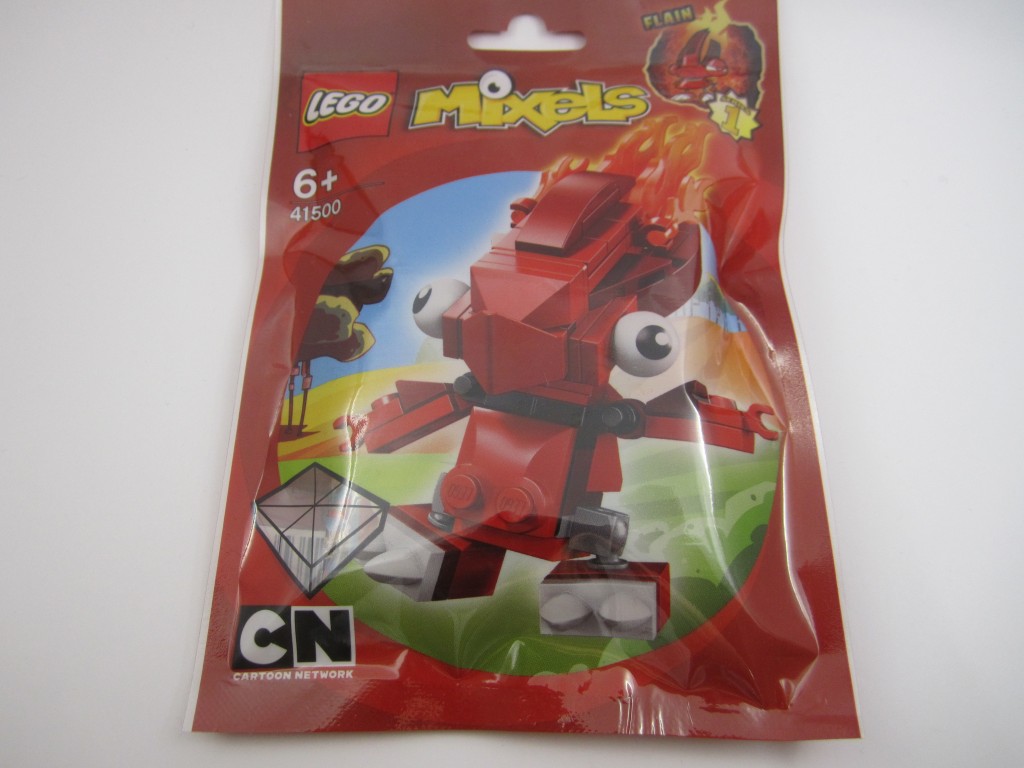 It would’ve been amazing if they functioned like Ziploc bags and you could just seal them shut as the quality and design of the packaging is actually quite nice.

This is one of the more unique themes that LEGO has released this year, especially because the concept and design is so different from the kinds of sets that LEGO normally produces. You may not care too much about the animated shorts, character names and personalities but there’s no denying that as a LEGO toy, the Mixels represent fantastic value and replayability.

Stay tuned for my review of the next 2 tribes in Series 1, the Cragsters and Electroids!

LEGO Mixels Series 1 is available online on LEGO.com or in most toy aisles for $5.99, depending on stock levels. I don’t think massive amounts of Mixels were produced, so you should pick up them up if you haven’t already.