With The LEGO Movie coming out in Australian theatres in less than 2 weeks time, LEGO Movie sets are finally starting to show up on toy department shelves across the country which is fantastic news for LEGO fans looking to buy and own a piece of the movie!

I recently took advantage of a recent Myer sale to pick up one of the smaller sets, 70801 – Melting Room to kick off my very first review of a LEGO Movie set.

Retailing for $20, don’t let the set’s small size deceive you – it packs a ton of value for a small set. 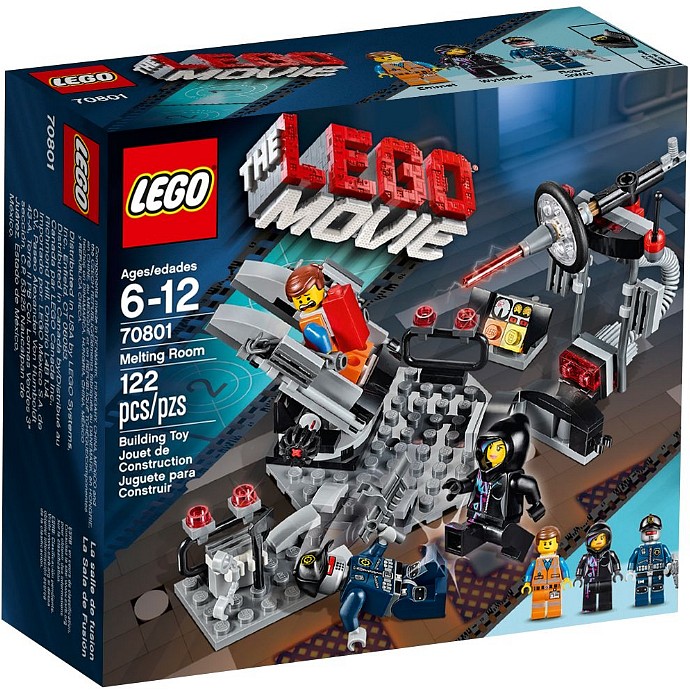 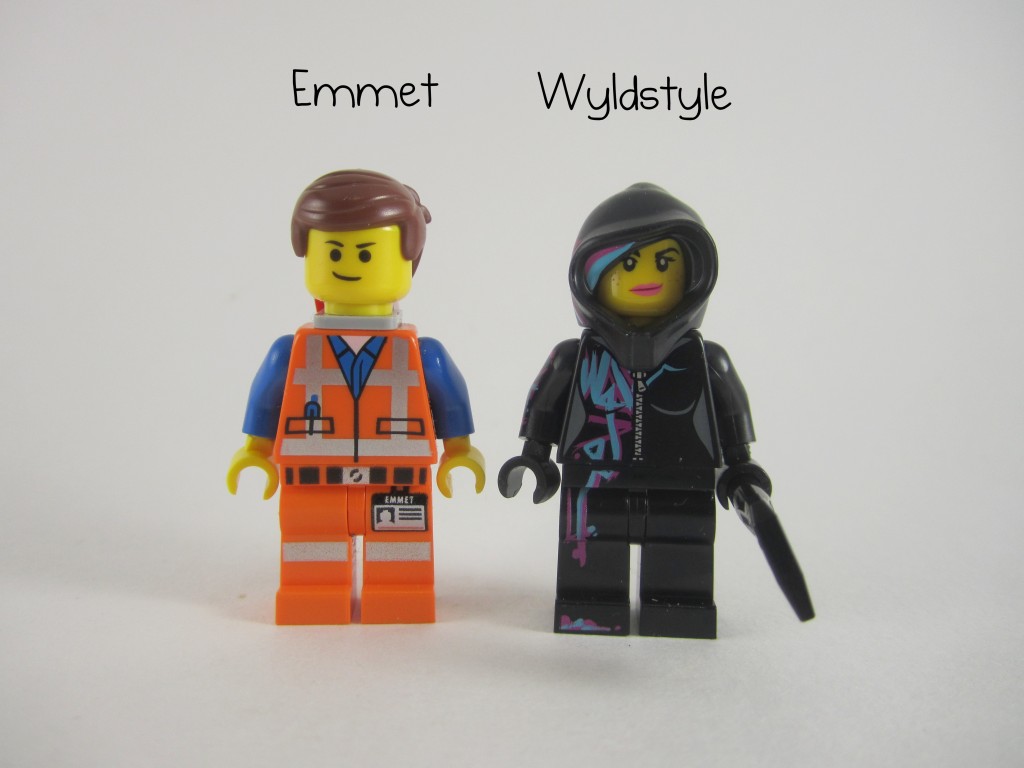 First up, the minifigures. Being the protagonist of The LEGO Movie, Emmet is omnipresent in most of the Movie sets. He’s got your standard issue orange construction uniform sans hard hat, which isn’t too bad since I really like his new hair mould. He’s got 2 faces, a startled one and a smirky confident one which are both nice expressions to have. 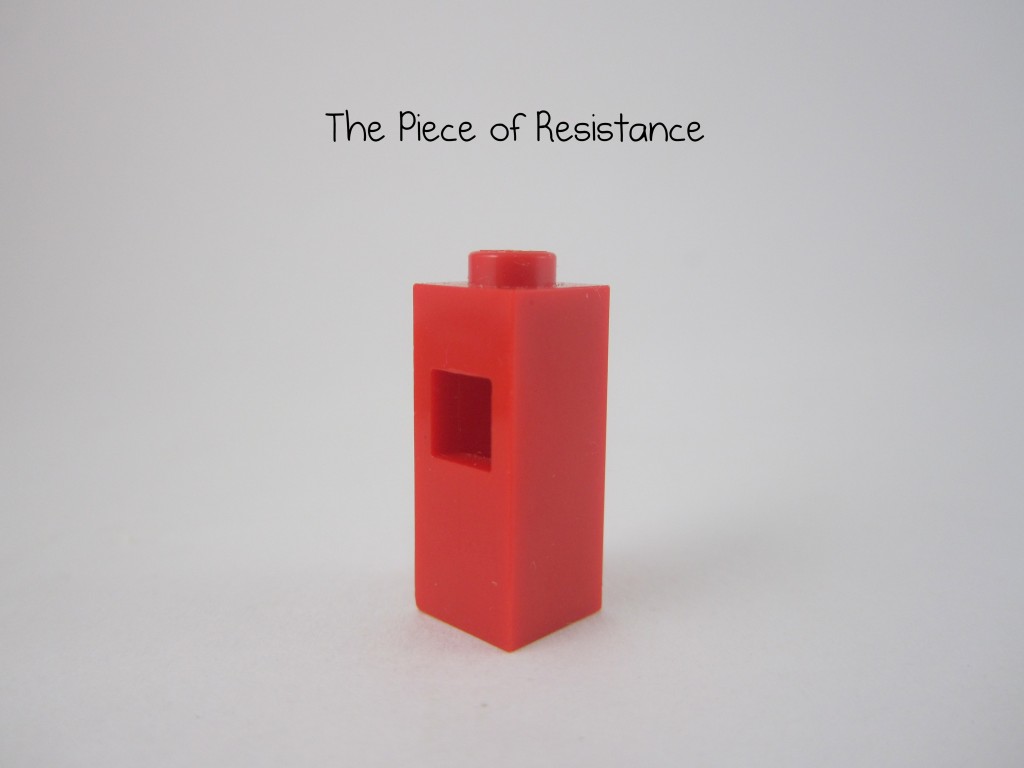 Emmet comes with the Piece of Resistance which is coolly attached to a neck piece. You’ll find out about the significance of this brick when you watch the movie 🙂 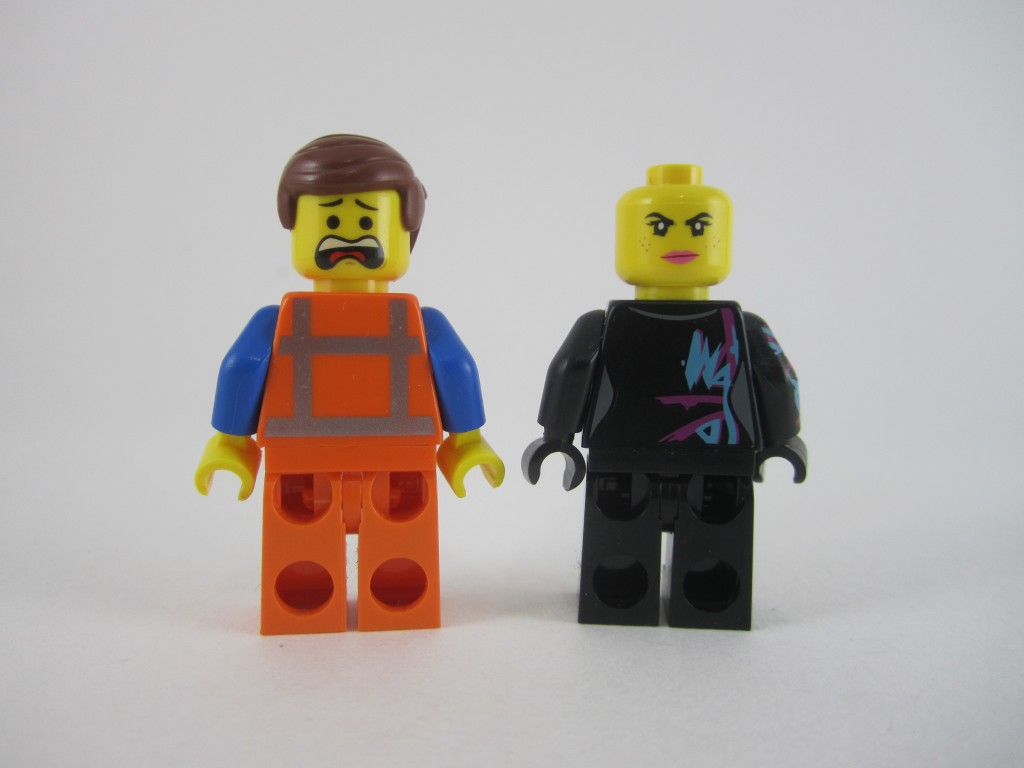 Wyldstyle on the other hand is probably the main draw of the set. Unlike stock standard Emmet, the hooded version of Wyldstyle is exclusive to this set and is a very cool minifigure to own. She sports the same torso and legs as other Wyldstyles. Like Emmet, she also sports a dual face but it’s pretty hard to tell them apart since they look alike. One’s a stern face and the other is a stern smile. Go figure. 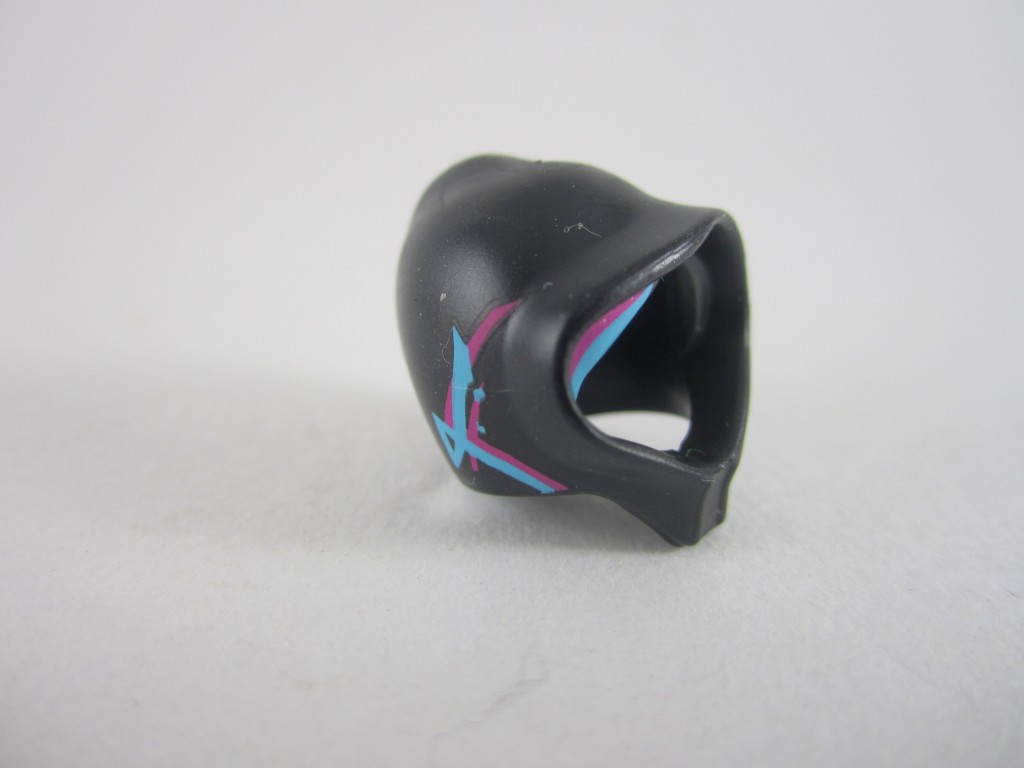 Her hood is pretty impressive looking in pictures of the set, but when I popped open the box, I was disappointed to discover that it’s made of squishy rubbery plastic as opposed to good ol ABS. It doesn’t look bad since it has a bit of a matte sheen to it, but I’ve always been personally averse to the squishy material as I never found them very ‘LEGO-like’. 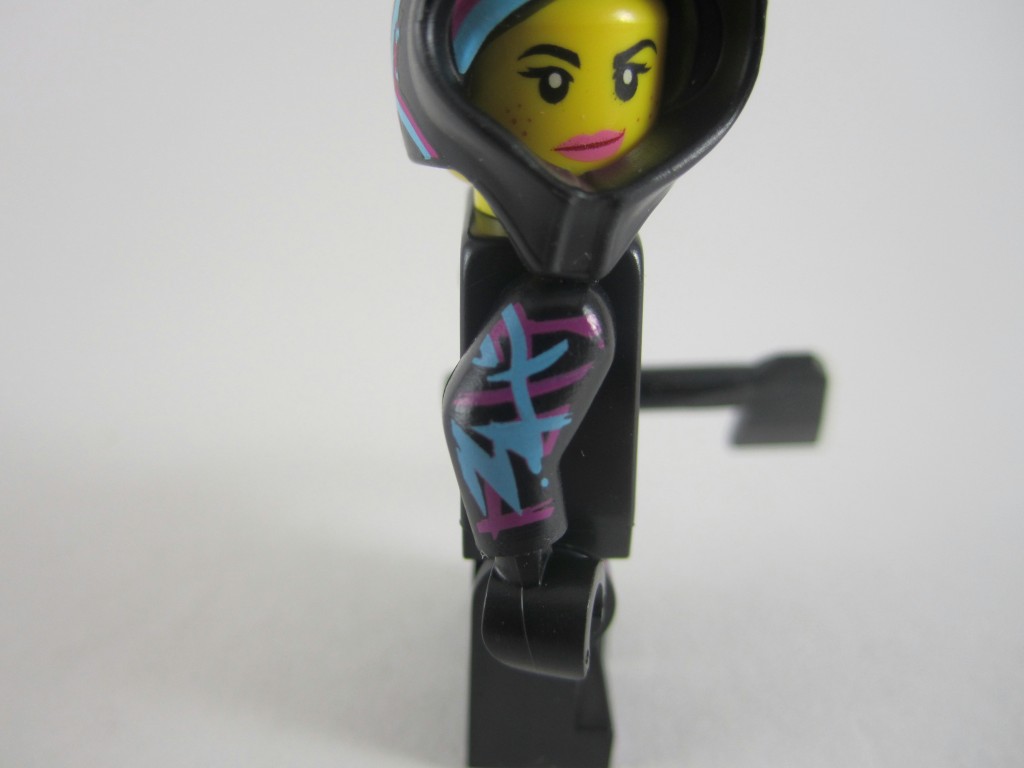 The design on Wyldstyle’s torso extends to her right arm which really gives her minifigure that extra edgy look to her character. 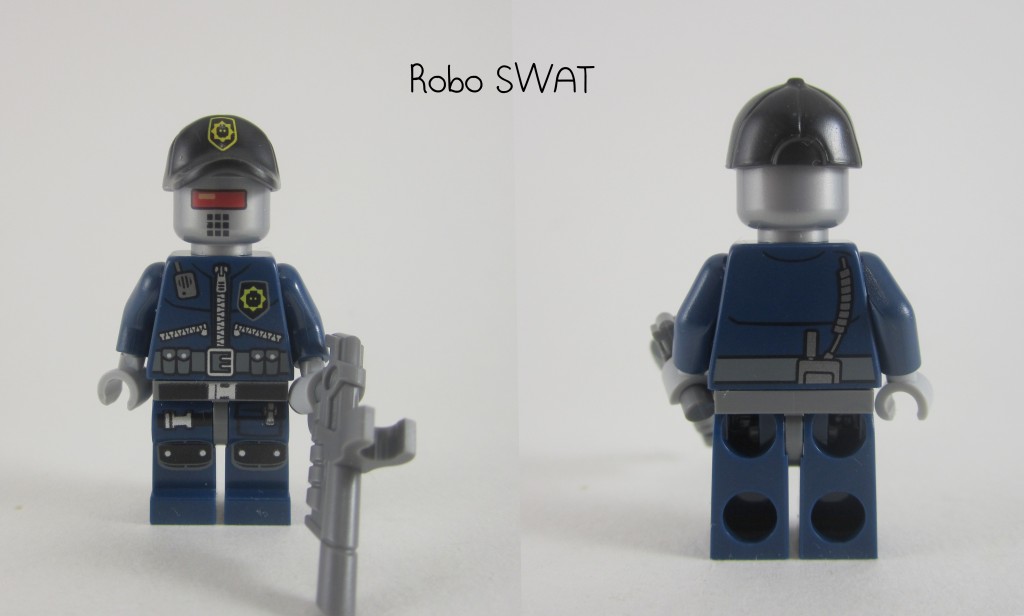 Also included is an ‘exclusive’ Robo Swat minifigure who is one of President Business’ robotic henchmen. I say ‘exclusive’ because the only part that’s really unique is his cute little baseball cap, which has the SWAT logo printed on it.

All in all, it’s a pretty decent minifig, featuring fairly detailed back and front torso prints. Swap his head and hands out and you’ve got yourself a nice little law enforcement body. 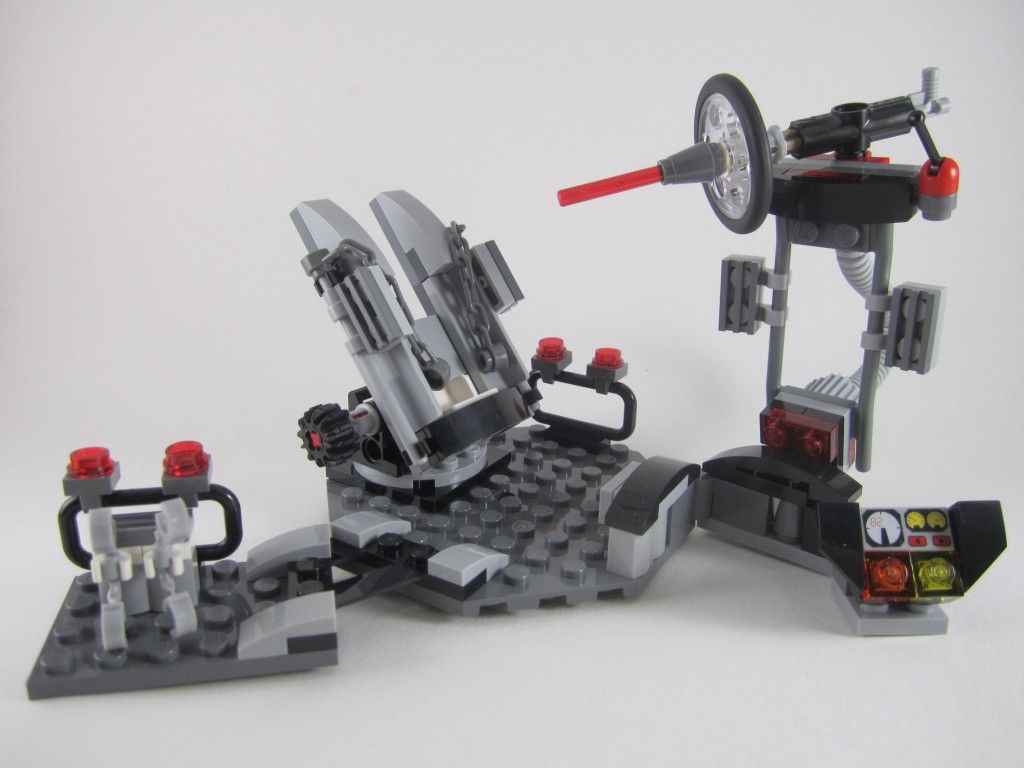 For a small set, the finished model is impressively detailed and is not what you’d usually expect from a $20 set.

The build is split into 3 distinct areas, a storage area for handcuffs, the main hexagonal platform that houses a device to hold Emmet down and a large laser contraption complete with a mini control panel. 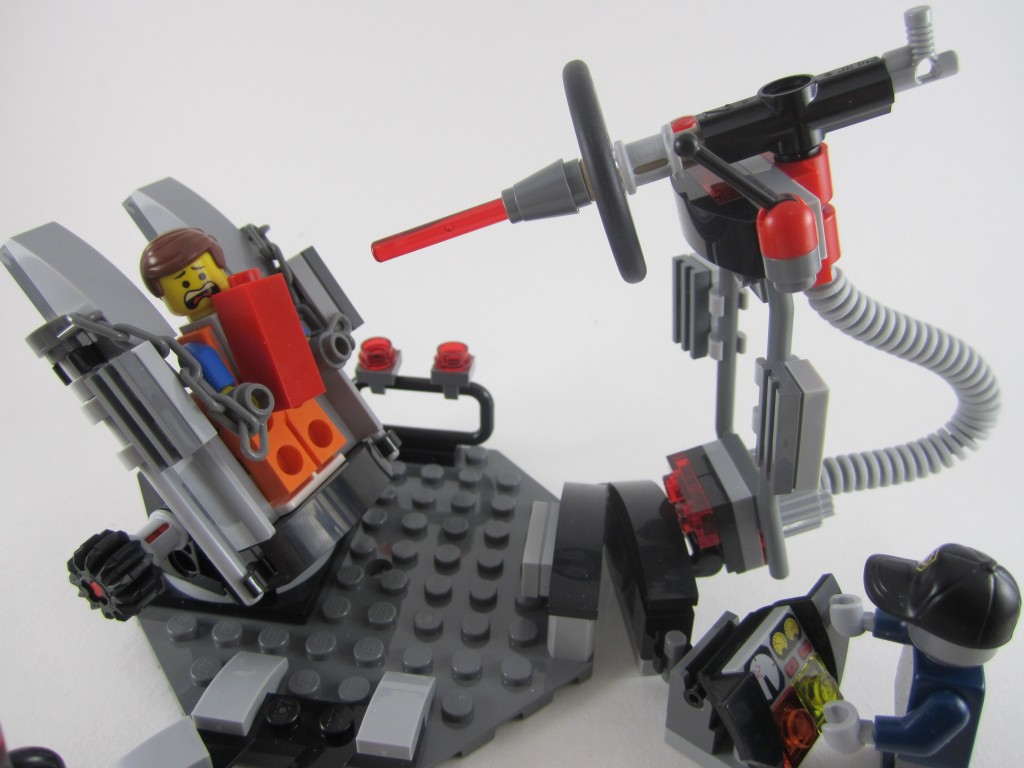 Having seen the movie, it’s an accurate recreation of one of the action scenes where Wyldstyle comes to Emmet’s rescue and beats up a ton of bad robots in the process. 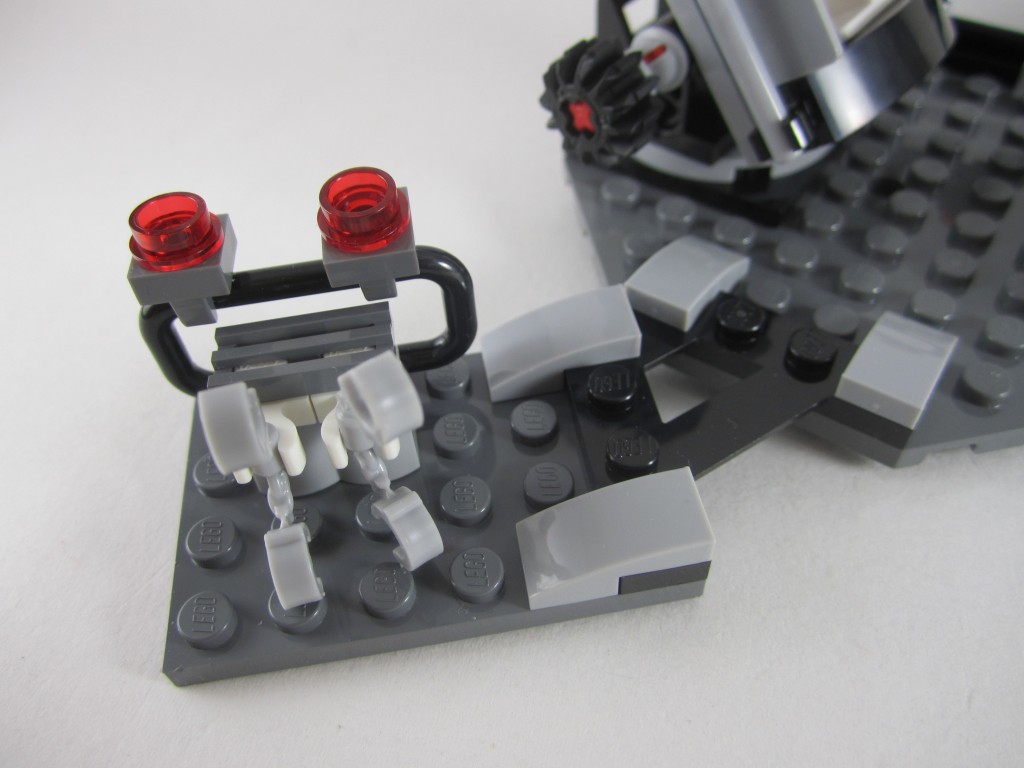 The handcuff holders is quite nondescript, with the only notable part being the A-shaped piece used to connect it to the main platform. 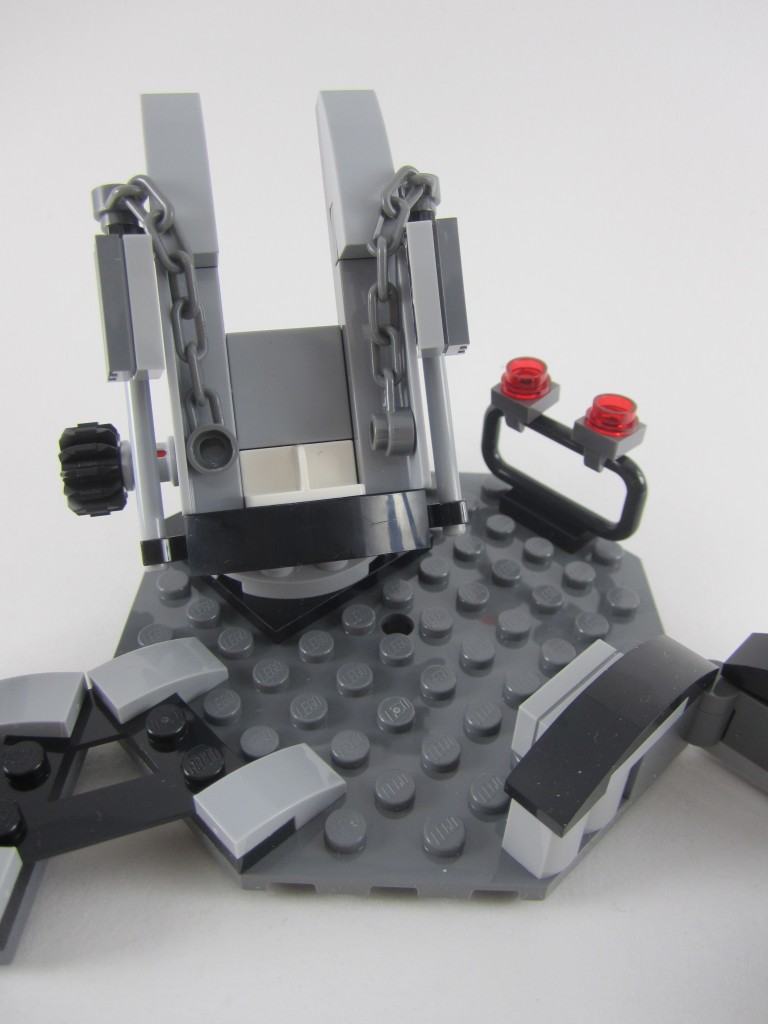 The main platform houses the torture device, designed to chain unassuming LEGO minifigs in place as they’re melted by the giant laser behind them. A minifig’s legs snugly fits into the bottom section and there are 2 short link chains to shackle them in place. 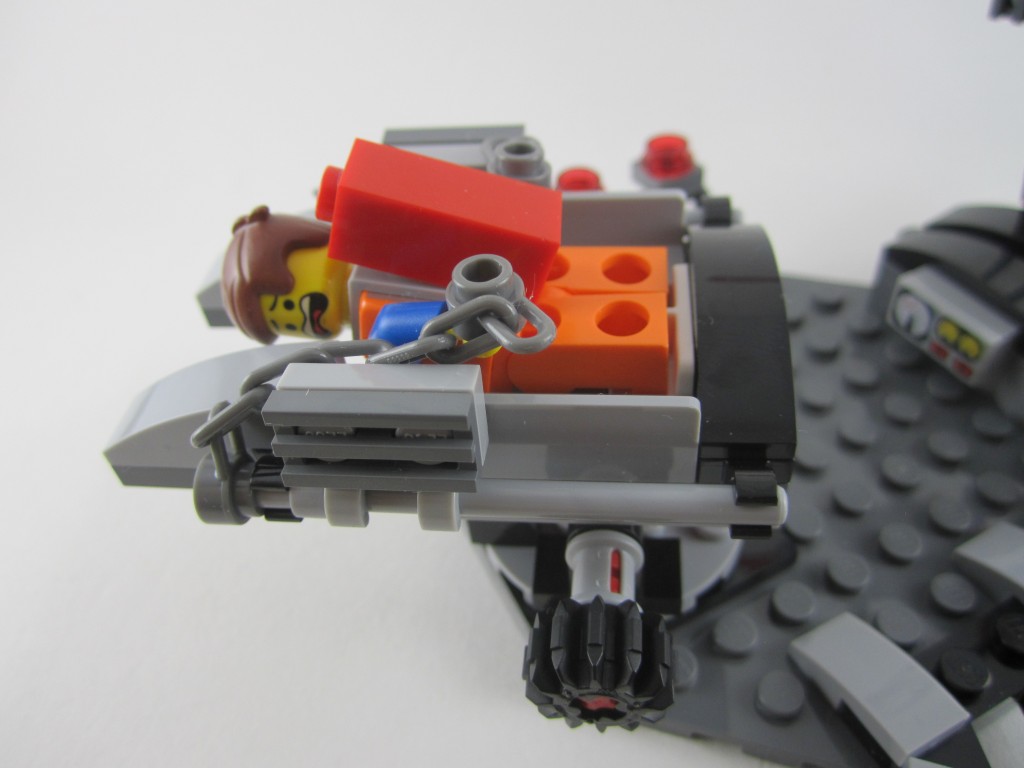 The holder can be tilted up and down through the use of a small knob in addition to being swivelled 360 degrees.

The laser is adequately menacing despite being constructed out of minimal parts, featuring some rare components such as a transparent disc and a pipe-hose thingy sticking out the back. The laser head is fairly flexible, allowing you to bend it into different targeting positions. 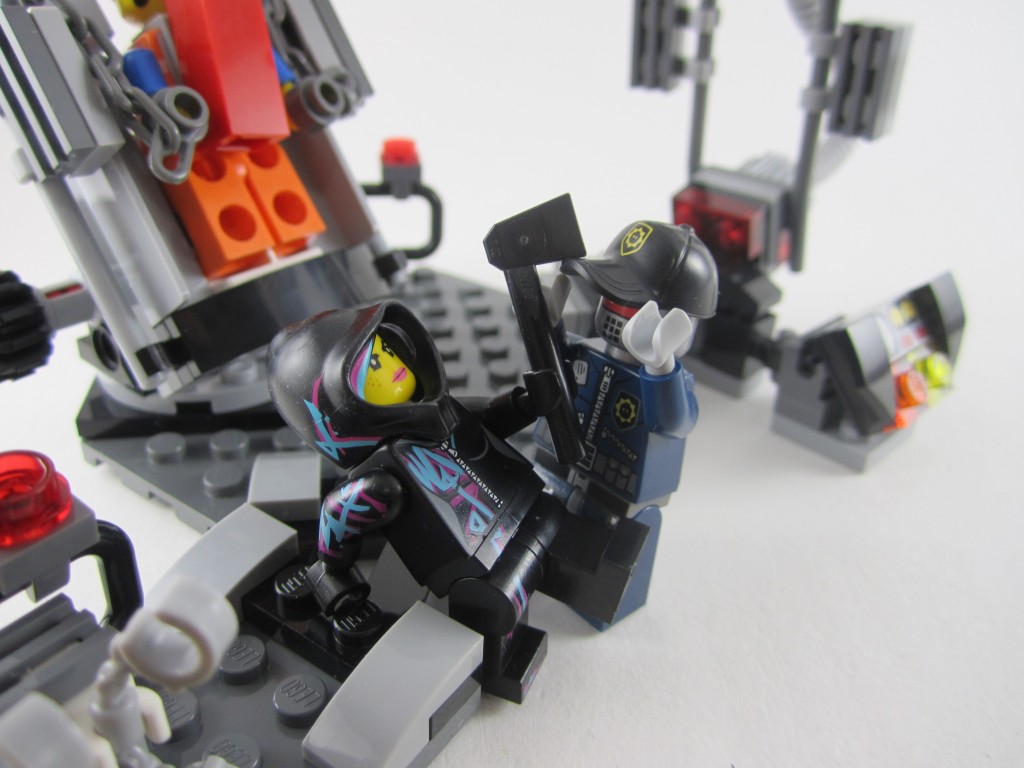 Overall, the Melting Room is an above average set, being highly playable with tons of moving components in addition to looking great on display. Hooded Wyldstyle is one of the 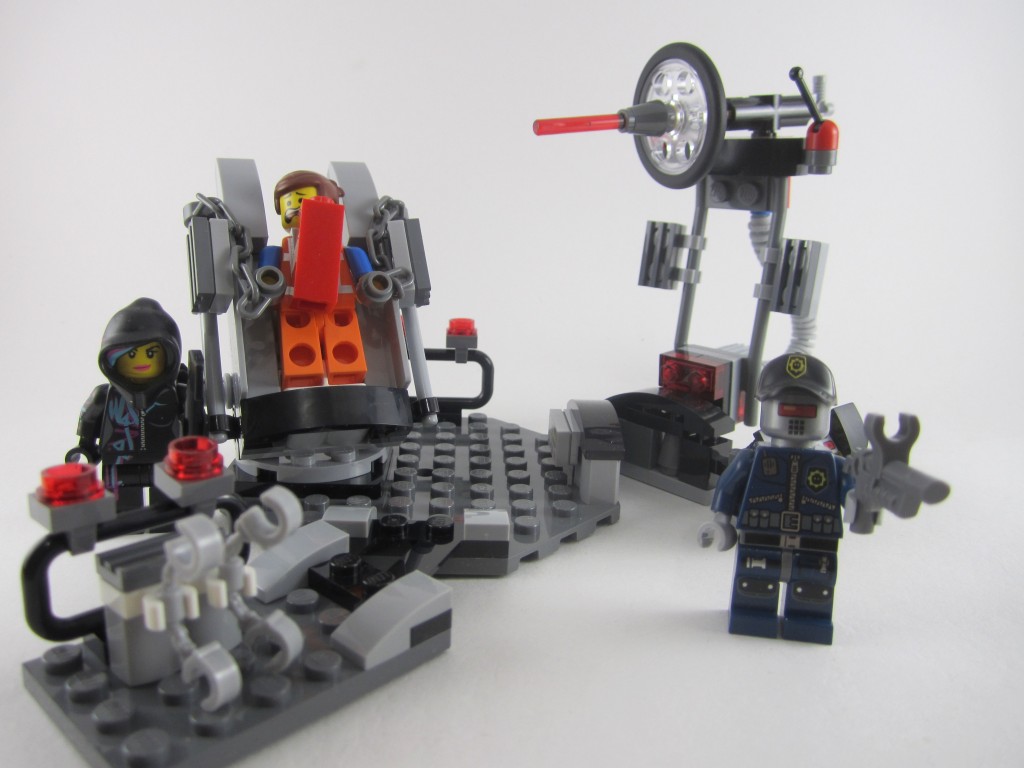 Final Thoughts: For 20 bucks and even less if you manage to find it at 20% off, Melting Room is a really great buy. For a small set, it contains a disproportionate amount of useful parts and you get some decent minifigs as well. Put on display, it holds up pretty well as well. I think it’s a lot better value than the smaller set counterpart, the Getaway Glider. That being said, it’ll be one of those sets where I’ll assemble and display for a short while before dismantling and harvesting it for parts.

Should You Buy It?: If you’re a LEGO fan, I guarantee that you will love the movie and you’ll definitely want to pick up a few movie related sets. The Melting Room is an excellent stepping stone to get your LEGO Movie collection started out. You get 2 essential minifigures, one of which is exclusive to the set (Hooded Wyldstyle) so if you’re a completionist, this is a set you’ll want to pick up. Lastly, the selection of parts is exquisite and you get a ton of value in terms of the elements found in the set. Overall, I highly recommend picking this up.

Thanks for reading! Will leave you with a picture of Wyldstyle decapitating the Robo SWAT guy. For some reason they chose to include a hatchet in this set… and you don’t want to mess with Wyldstyle. 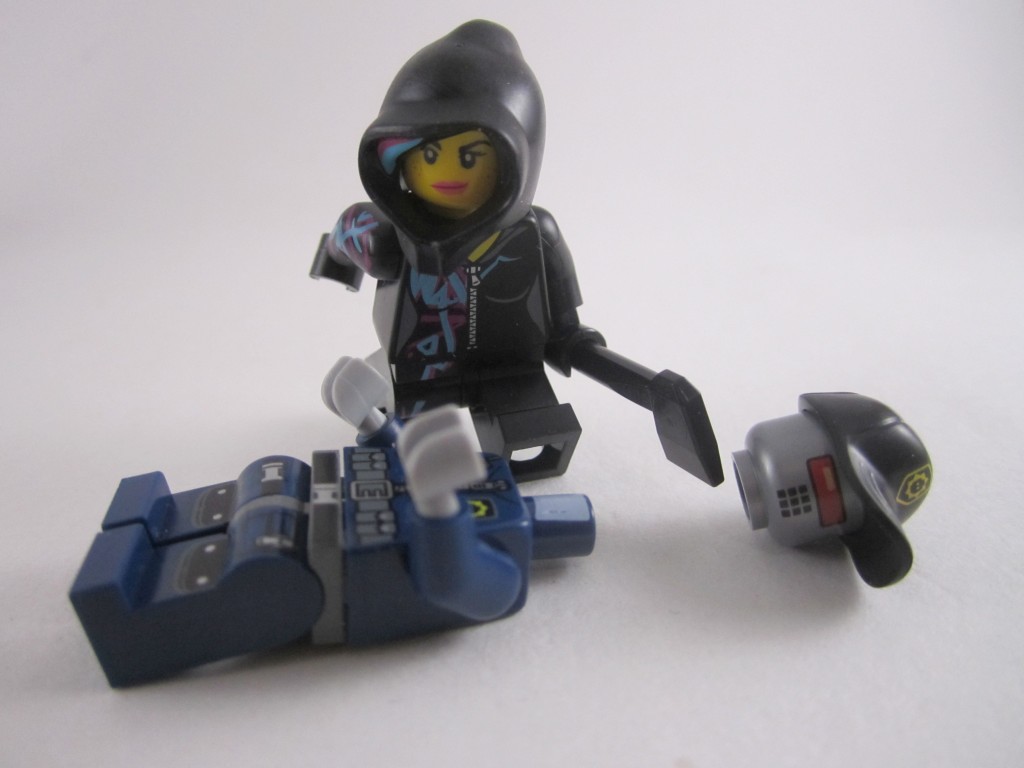