Update: Be sure to check out my full review of the LEGO Technic 42056 Porsche 911 GT3 RS for more photos!

The LEGO Technic Porsche 911 GT3 RS is undoubtedly one of most anticipated sets this year. When it was announced in late April, Technic, automotive and even regular LEGO fans like me were sent into a frenzy at the overall set.

It’s undeniably gorgeous and more than befitting the luxury, power and class that’s synonymous with the Porsche brand. It also helps that the 911 is one of the most iconic cars of all time.

The LEGO Technic Porsche 911 will be released on LEGO.com on 1 June 2016. Here are the product pages – do bookmark them. I have a feeling that this set is going to sell out almost immediately. 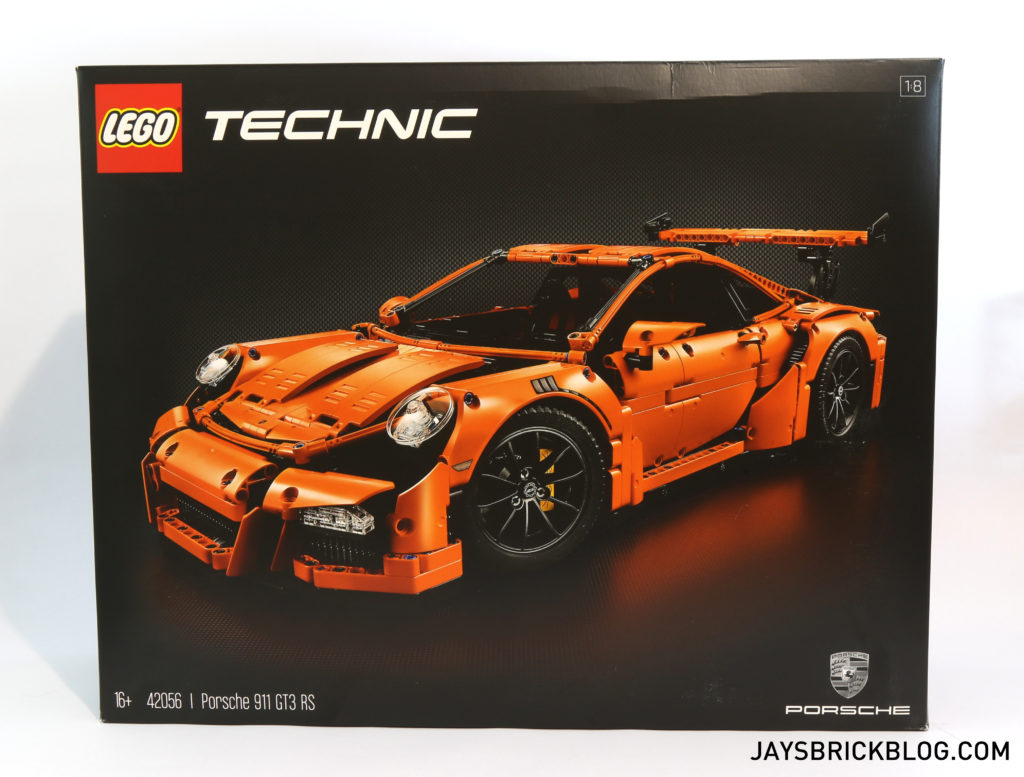 Special thanks to The LEGO Group for sending a copy of the Porsche 911 for review. All opinions are my own and are not influenced by any party

.If you’ve been following my page on Facebook, you’d have seen plenty of teasers that I’ve been posting up to whet your appetite and get your engines running. I’m only publishing the full review on 1 June 2016, so stay tuned for that!

In the mean time, I’ve documented the unboxing experience of the Porsche 911 GT3 RS! The premium box, packaging and the general way that this set is presented is an integral part of the set’s appeal.

So here’s your peek into what it’s like unboxing the new LEGO Technic 42056 Porsche 911 GT3 RS! I even made a video, which is quite uncharacteristic of me since I’m fairly camera shy!

I figured it would be the best way to capture the unboxing process. I have like, zero experience making videos, so forgive me if it isn’t up to scratch!

Check the unboxing video out on my newly created Youtube channel below. Feel free to subscribe, although I don’t think I’ll be making many videos as I’m most comfortable writing and taking photos 🙂

Here’s a short writeup on the contents of the box and pictures as well if video isn’t your thing. 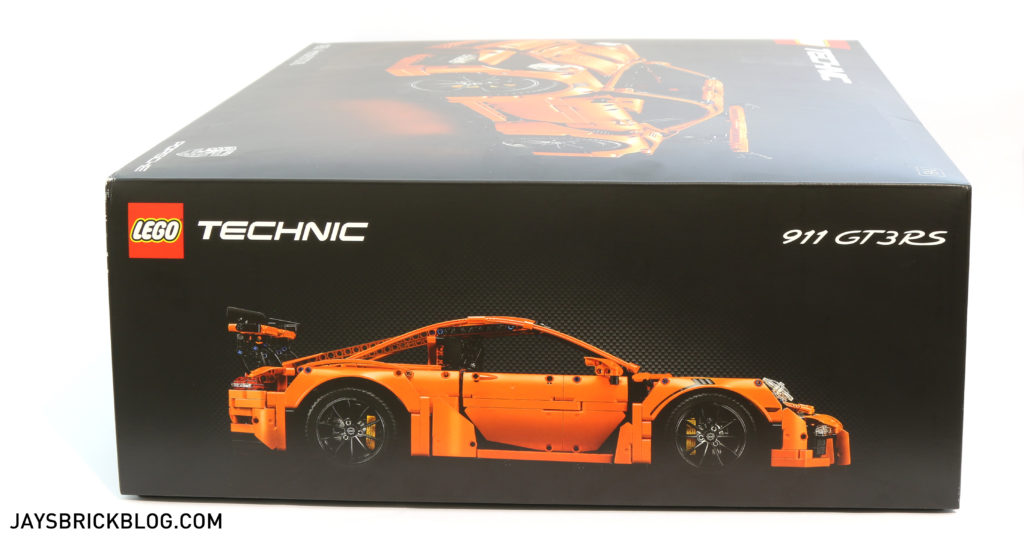 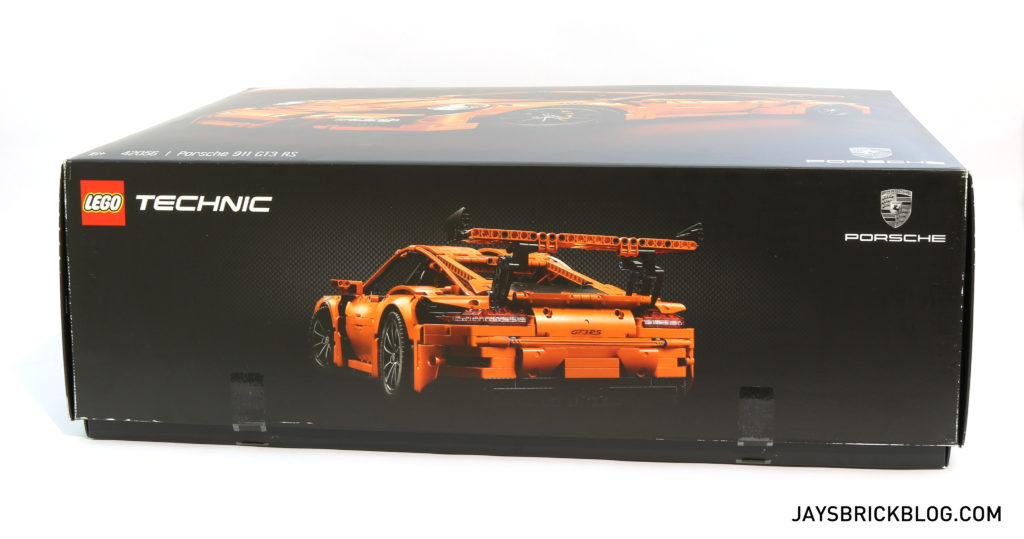 First of all, the box is absolutely massive. It’s nowhere near as large as the Death Star or Helicarrier box, but it’s sizable compared to most sets these days. The box is made out of a very premium matte material that’s quite unforgiving if you have oily fingers! The box some very subtle carbon fibre details printed on it.

You can tell immediately even before opening the box that you’ve got a really special, limited edition-feeling set on your hands. 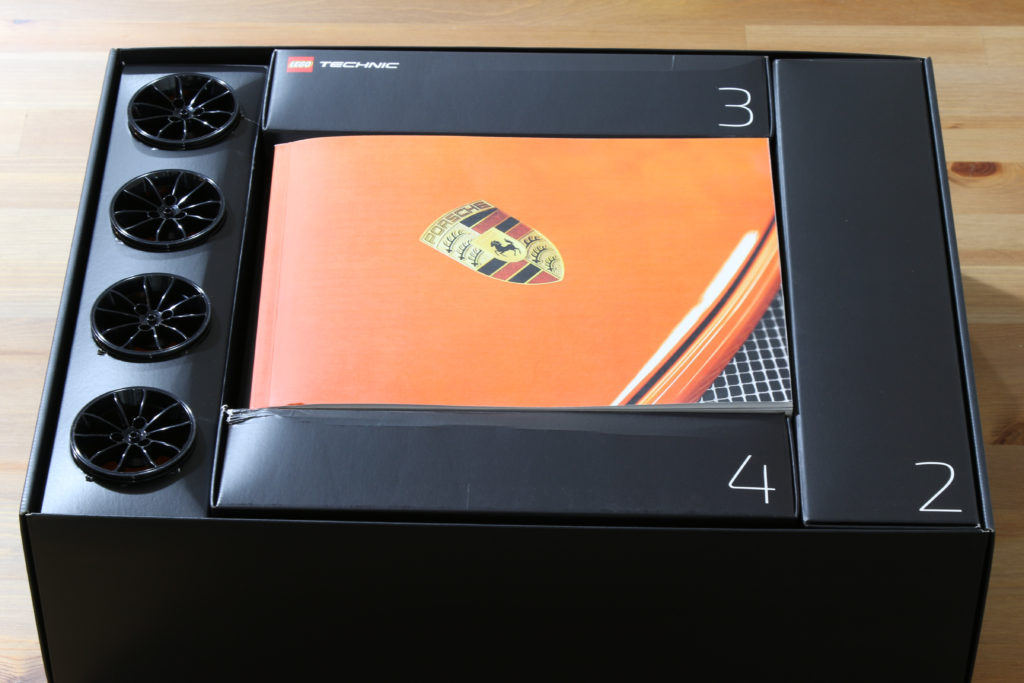 This is the view that greets you when you open the box. The outer box is made out of 2 parts, and you lift up the upper box very much like you would open an iPhone box.

All the contents are packed neatly, and you can see the four gorgeous new exclusive rims slotted into a box on the left. The instruction manual, one of the highlights of the set is front and centre of it all, denoting its importance. 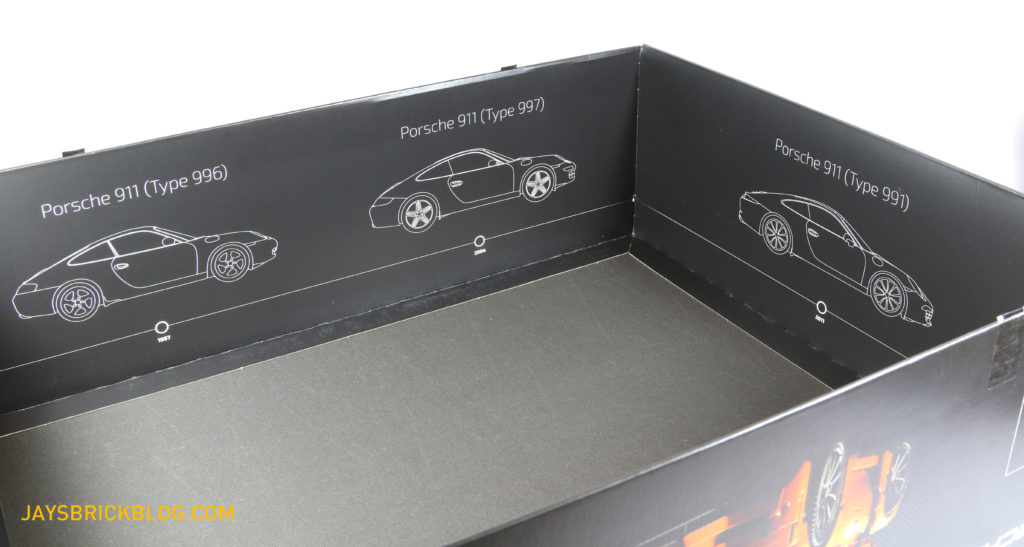 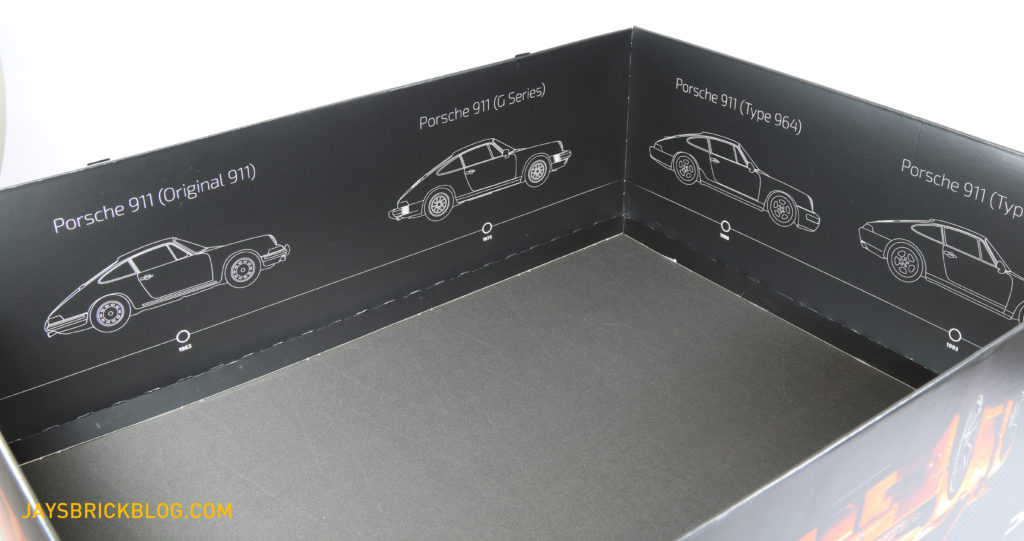 Before we get into the box’s contents, here’s another amazing design feature that surprised me when I lifted the upper box open. There’s a timeline printed inside of the box, featuring the evolution of the Porsche 911 from the original, all the way up to the current incarnation.

It’s things like this that really set the Porsche 911 apart from anything I’ve ever built. I really love the minimalist outlines that clearly show off the small changes in each version of the 911. 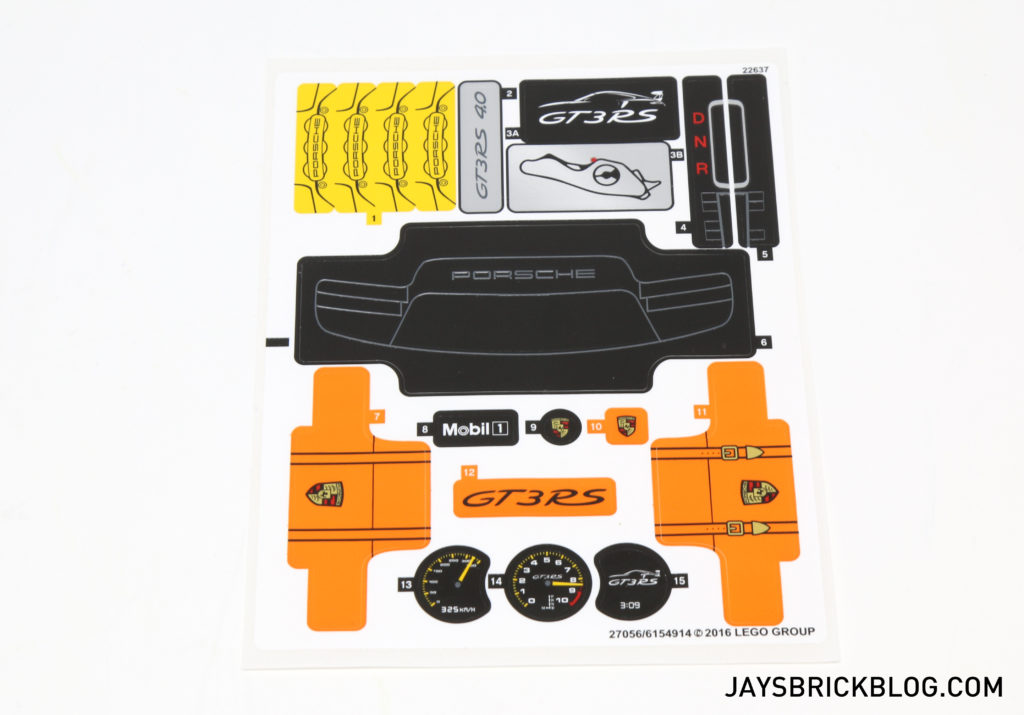 Here’s a look at the sticker sheet included. A bit of a shame that the calipers are stickers and aren’t printed. Sticker haters can probably not have to apply any of these, except maybe for the Porsche emblem, but I think they’re very well designed and add a lot to the realism of the vehicle. We’ll see how the stickers stack up when applied to the parts in my review. 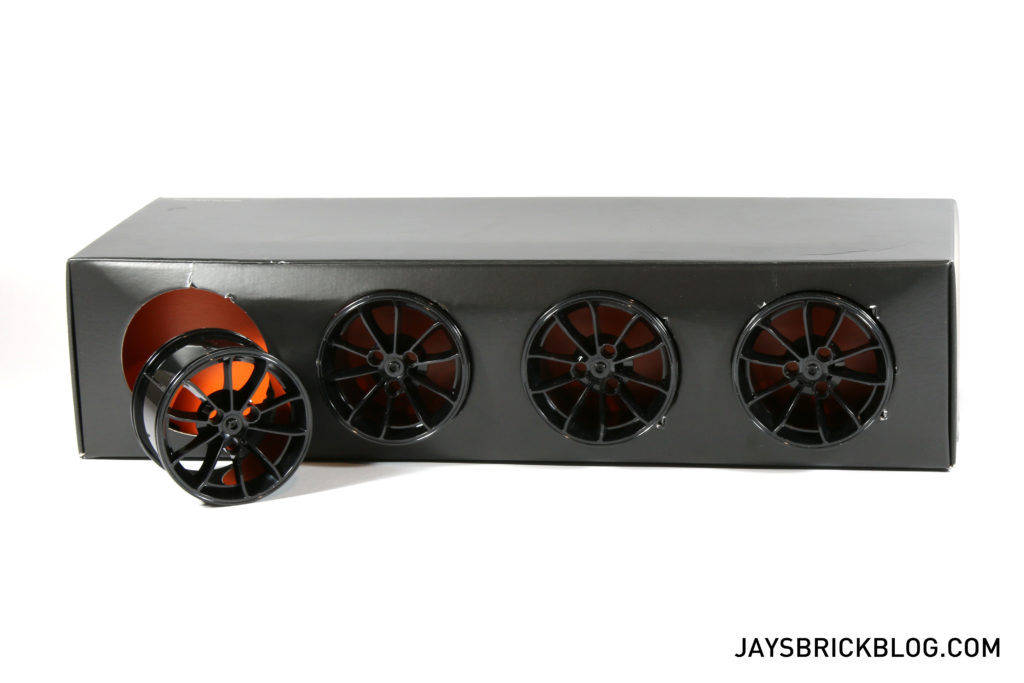 All the small parts boxes in the primary box can be removed, so here’s a quick look at each box. First up is the thin rectangular box that houses the rims. Again, it’s a really small detail, but I love that the insides of the box are orange. 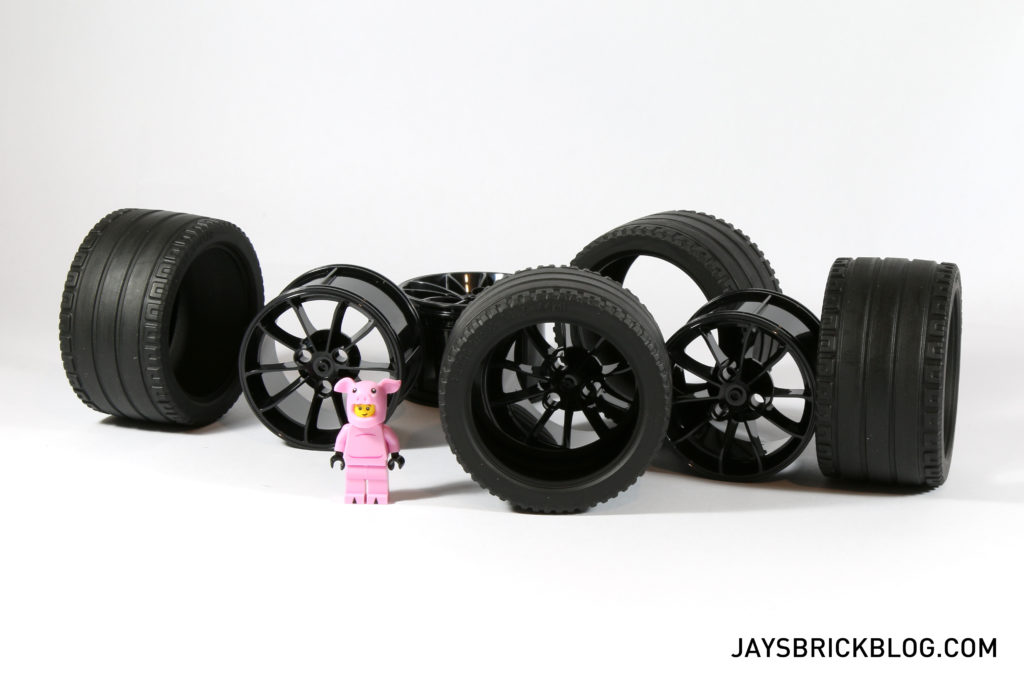 Inside the box are the rubber tyres which you extract by opening up the flaps. The tyres are huge! Piggy Suit Guy for scale. 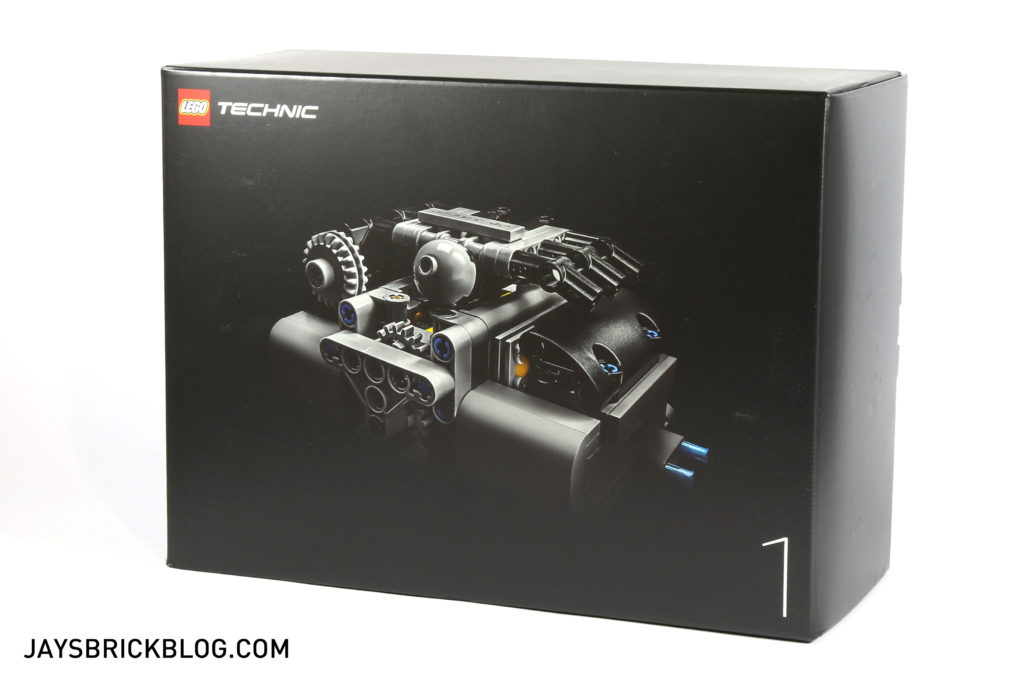 There are four boxes full of parts in various sizes. Each box has a specific component of the car printed on it, to sorta tease you on what you’ll be building. These boxes don’t necessarily correspond to the parts contained inside, but again, it makes each part of this set quite collectable. 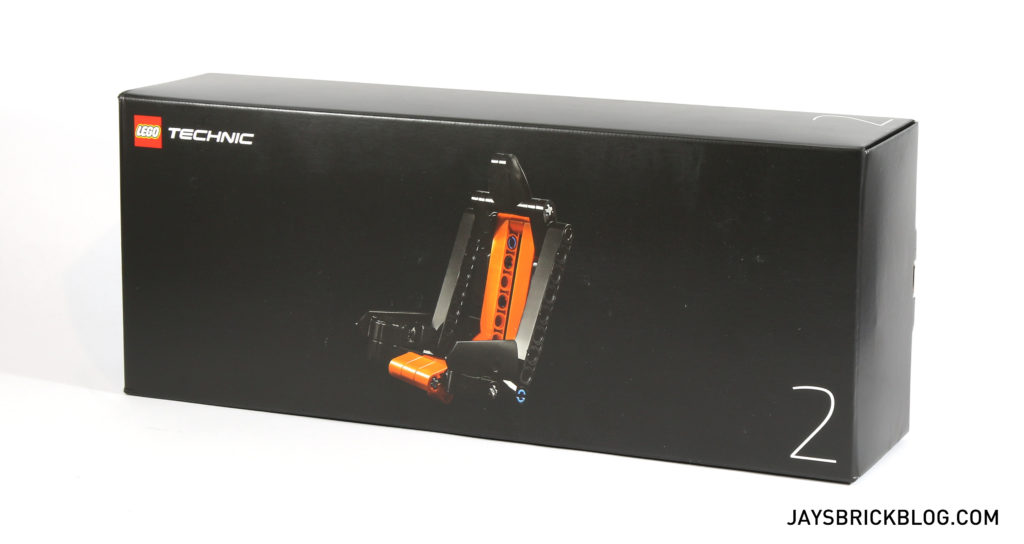 Box 2 has the Porsche’s bucket seat printed on it. 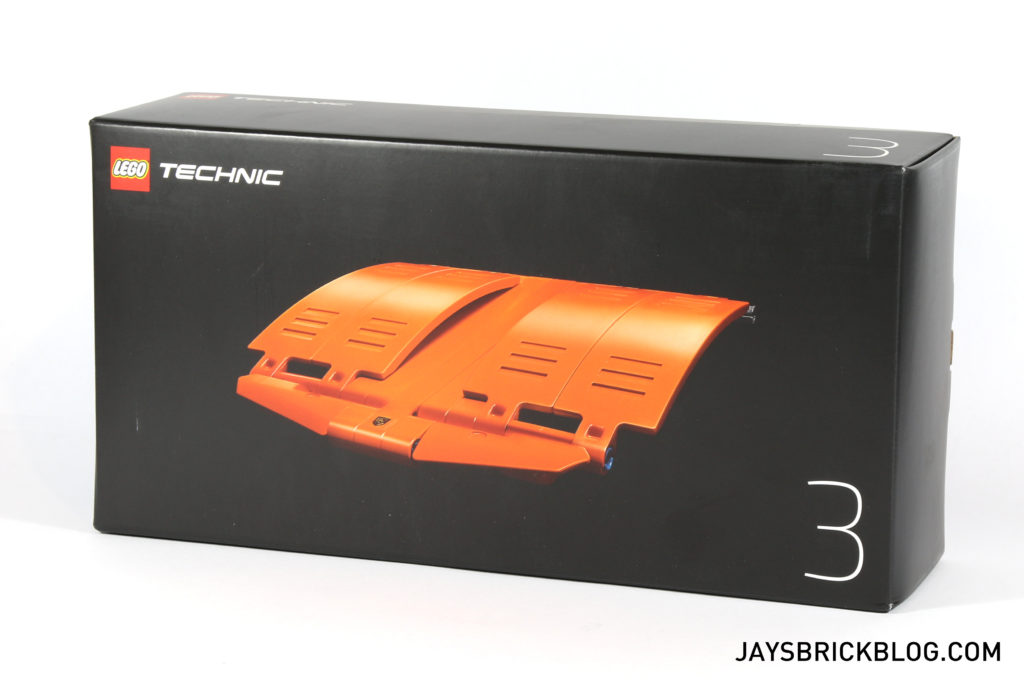 Here’s Box 3, which features the nose and bonnet of the car. 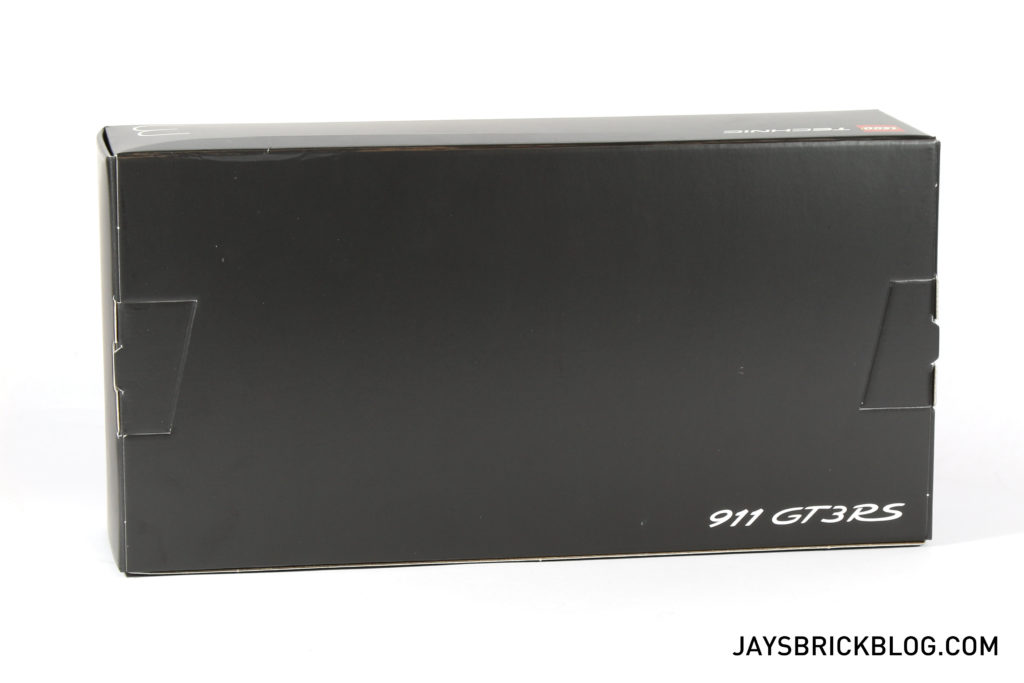 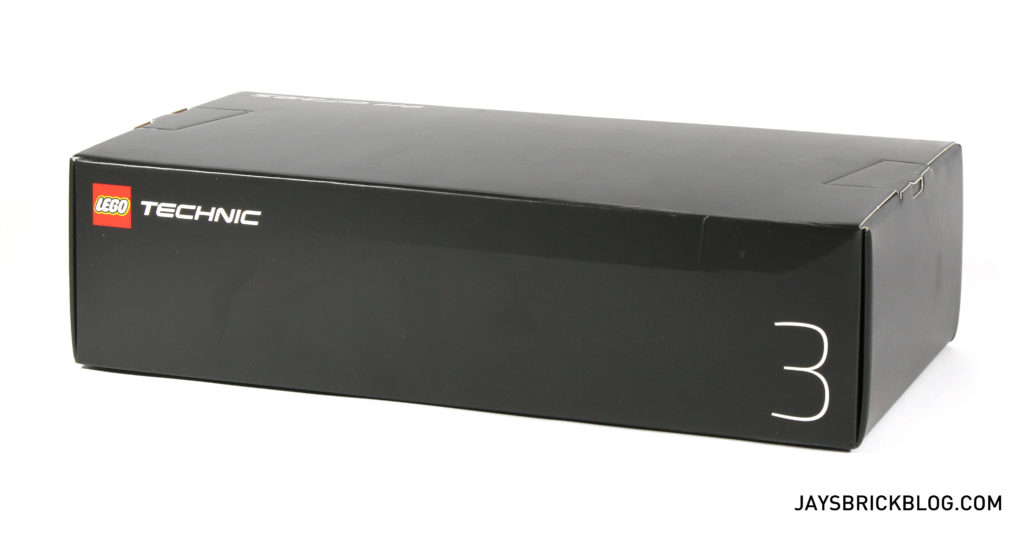 I forgot to mention, each box has the corresponding number printed on the top, as well as the 911 GT3 RS printed behind it, so it’s not a completely blank box. 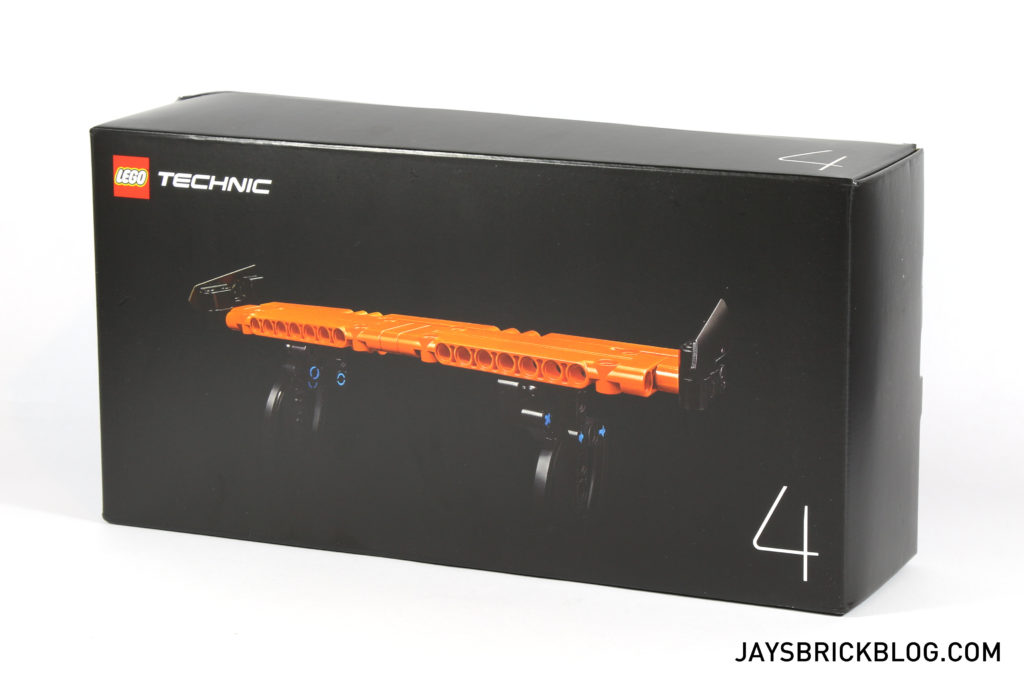 Here’s box 4 which has the Porsche 911’s spoiler printed on it. 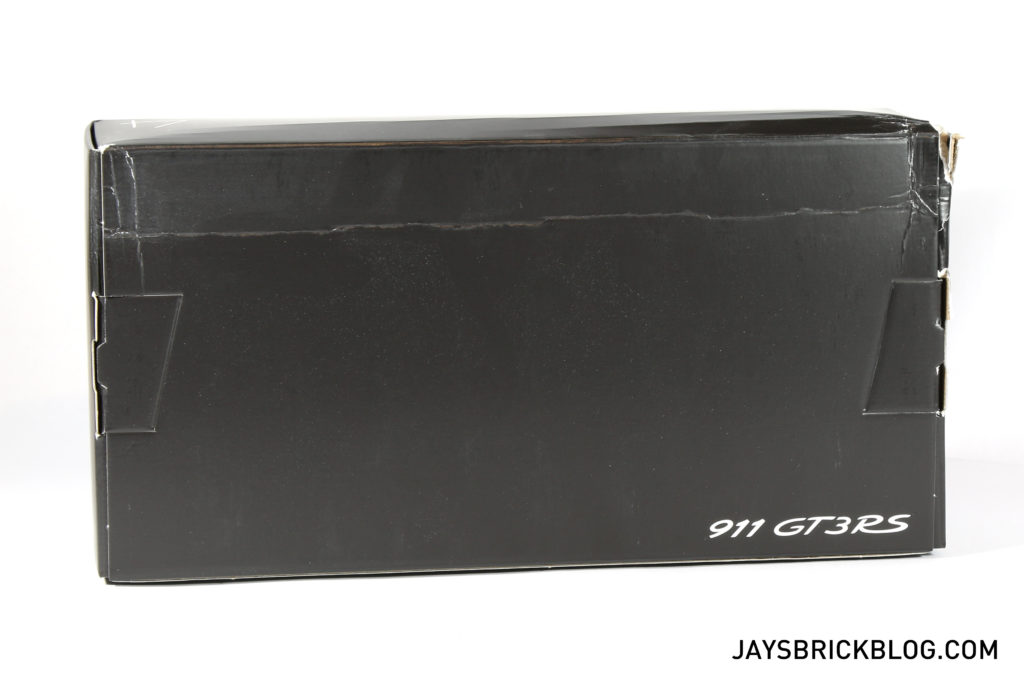 Unfortunately, Box number 4 was a little crushed for me. There wasn’t any damage visible from the outside, but I reckoned that it might have been because it was standing on its side, which may have put a lot of pressure on the box. Either that or it got bumped around in transit to me.

Either way, I highly recommend laying the box flat if you get it to prevent this from happening. 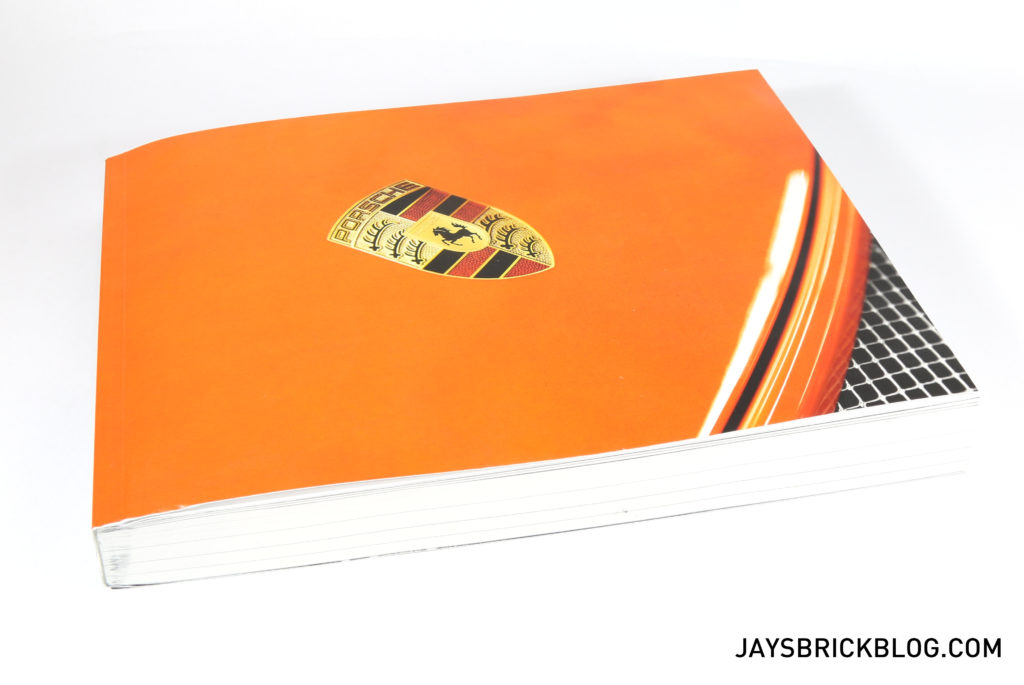 Last but not least is the absolutely gargantuan instruction manual/coffee table book. I really love the cover’s minimalist design with the Porsche emblem being the focus. 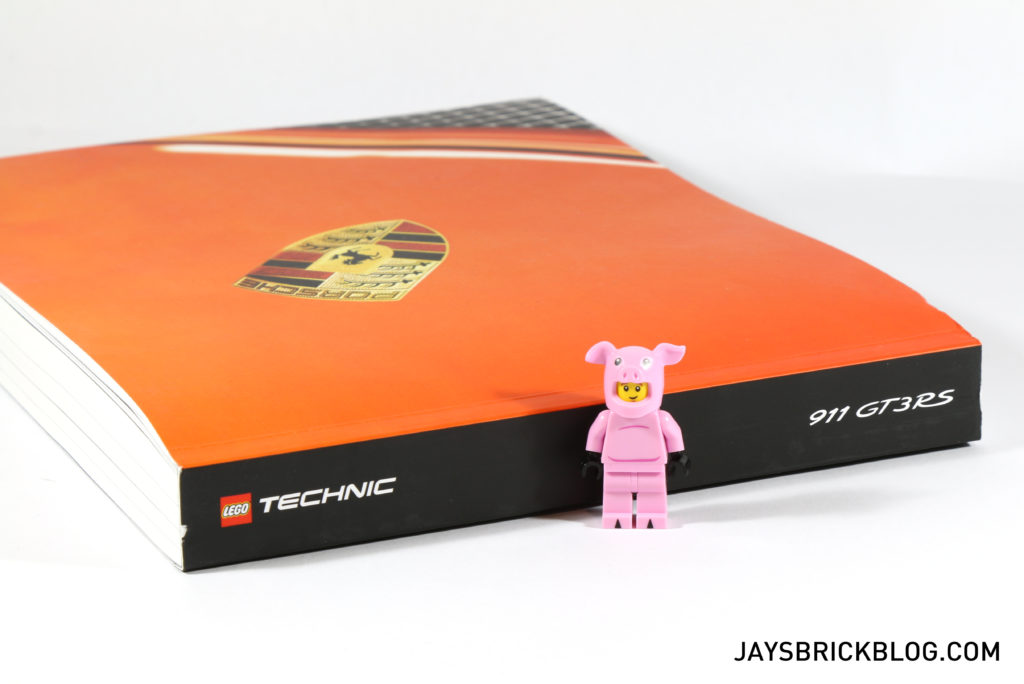 The manual is THICK! Almost as thick as a minifigure and incredibly hefty. It goes up to like… 856 steps!

I won’t be going into the contents of the instruction manual as I’m saving that for the main reveal. The manual is a core part of this set, since it’s much more than a bunch of instructions.

So there you have! The unboxing experience of the LEGO Technic Porsche 911!

It was a really enjoyable process and it got me really excited to start building the set. It has such a luxurious and superior feel to it that’s unlike anything I’ve ever encountered. Think the LEGO Ideas packaging experience taken all the way up.

You can really tell that LEGO and Porsche have put in a tremendous amount of thought into the set’s presentation and experience, which begins as soon as you open up the box.

I can’t wait to put the set together and bring you the review. Mark your calendars for 1 June for the complete review of the LEGO Technic 42056 Porsche 911 GT3 RS!

The Technic 911 Porsche will be released exclusively on shop.LEGO.com and 13 LEGO stores throughout Germany and Austria on 1 June 2016 before becoming available in other LEGO stores across the world from 1 August 2016 onwards. Australia will receive the set in most retail toy stores in September 2016.

Are you excited about the Porsche 911? Are you planning a Day 1 purchase? Let me know what you think in the comments!

« Review: LEGO 76046 Heroes of Justice Sky High Battle
And the winner of the Disney Minifigures Giveaway is… »