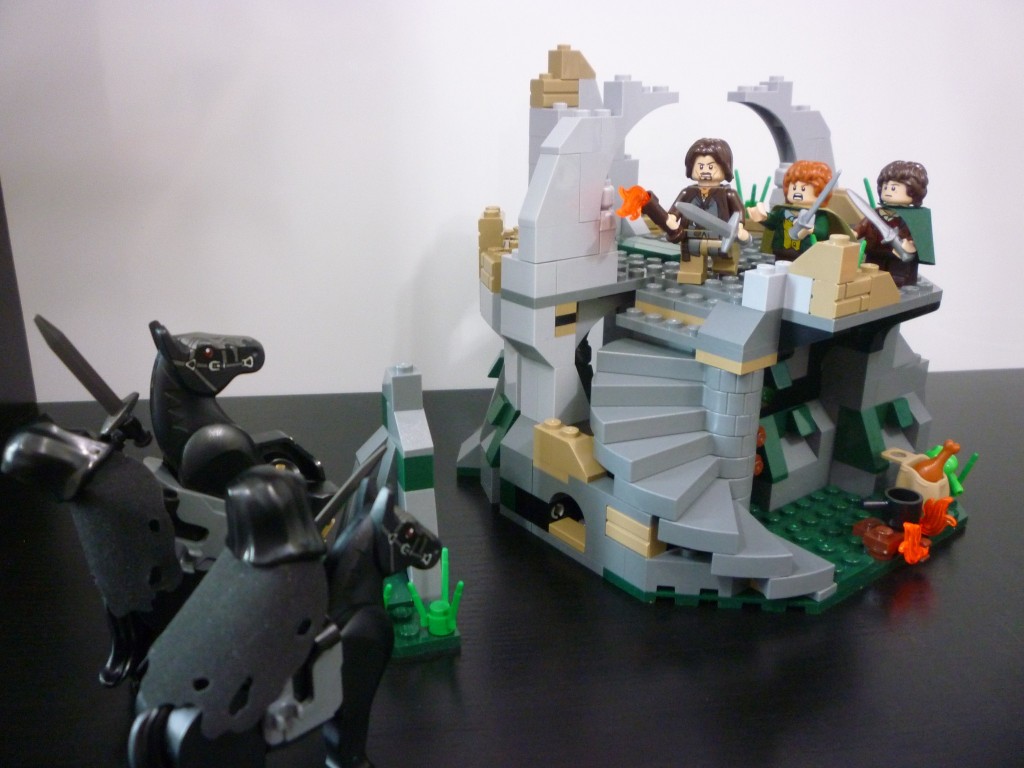 Here’s the second Lord of the Rings set that I managed to build, The Attack on Weathertop. This set faithfully (no exaggeration!) recreates the iconic scene where Aragorn aka Strider flees with the Hobbits from Bree after being pursued by the Ringwraithes (Nazgul), getting into the first exciting confrontation with the evil forces of Sauron. This was the second LotR set that I got from Canada and because of the size of the box and logistic issues, I had to make the painful decision of jettisoning the box behind in America’s Hat but oh well, sacrifices had to be done.

The stars of this set are undoubtedly the Nazgul. Sinister and bad assery incarnate.

As of today (25 June 2012), the Lord of the Rings sets are still not available in Malaysian toy stores which I find weird, seeing as how Australia are overrun with the sets. 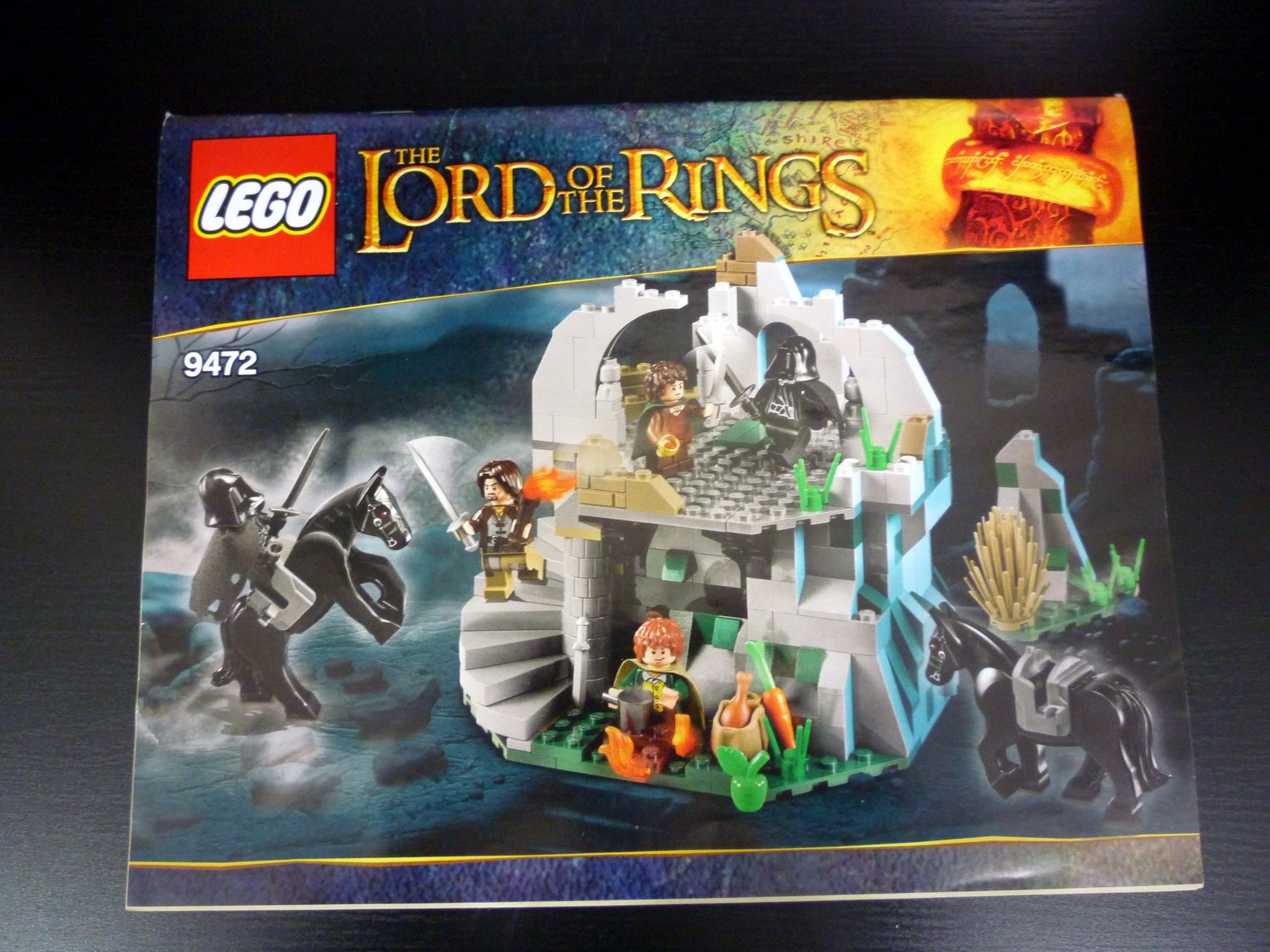 In lieu of a box shot, we get a snap of the instruction manual. Since I’ve never actually seen the box for Weathertop in person, I’m going to assume that the front of the box looks identical to this! 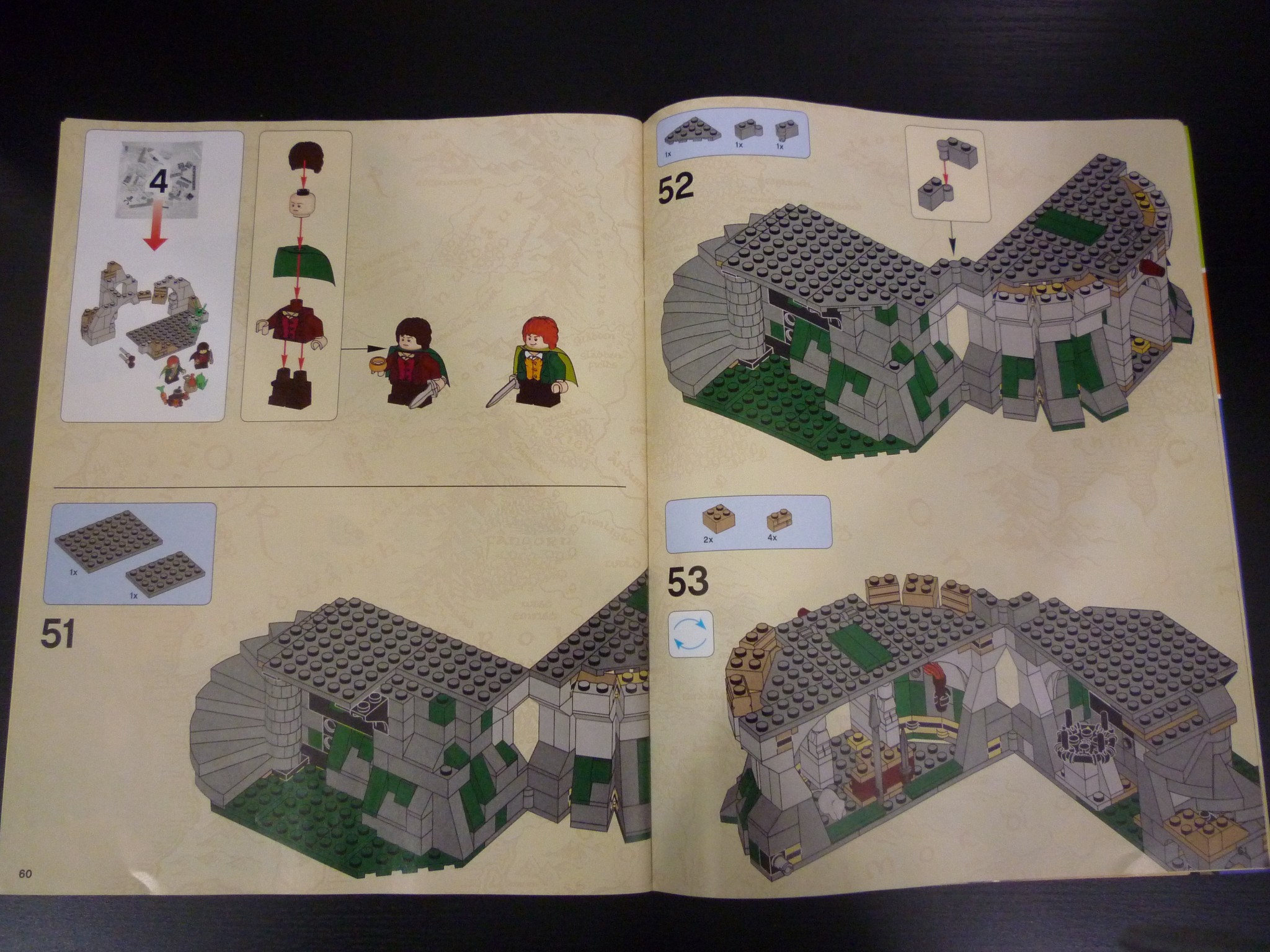 Here’s a shot of the instructions. Seeing that this was a surprisingly tricky build, the instructions were a lot more convoluted than usual, which isn’t saying much seeing as how the instructions in today’s Lego sets are basic and as foolproof as they can be. Nevertheless, I really enjoyed the build, as there was so much to do and I had to employ a lot of non-conventional building techniques. 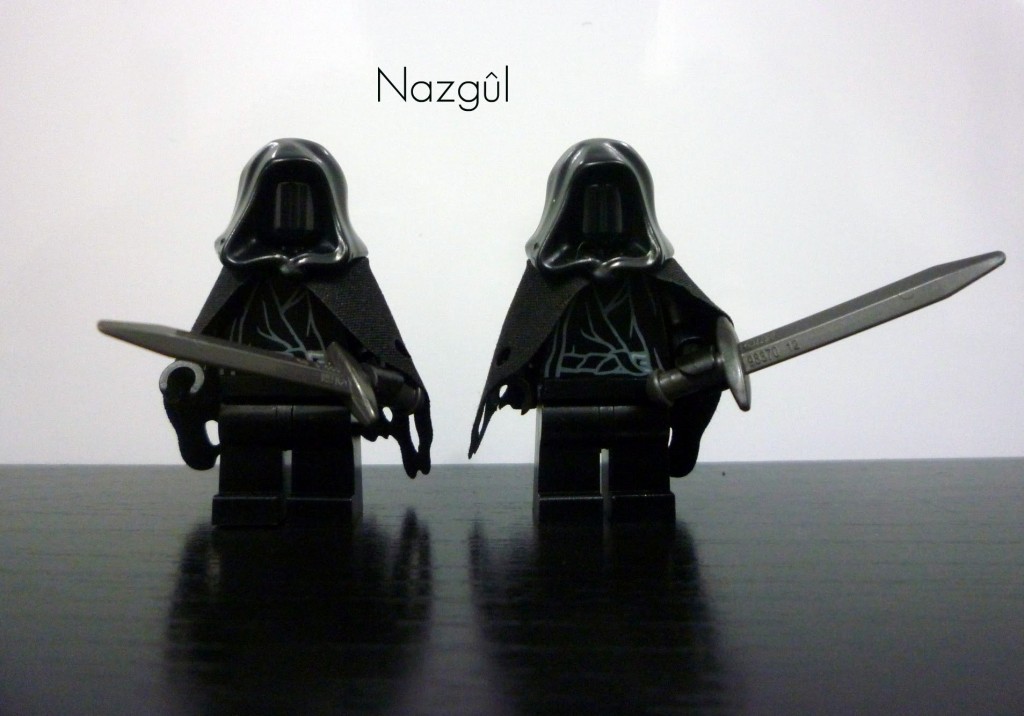 No doubt the main draw of the set, here are the Nazgul or most commonly known as Ringwraiths, the dreaded servants of Sauron. There are 9 Ringwraiths under Sauron’s employ but we only get 2 here, which is okay I guess. I would’ve loved more and I have half a mind to get all 9 from Bricklink IF i had the money. The Nazgul are equipped with one of the new longswords and a totally new oversized cape. 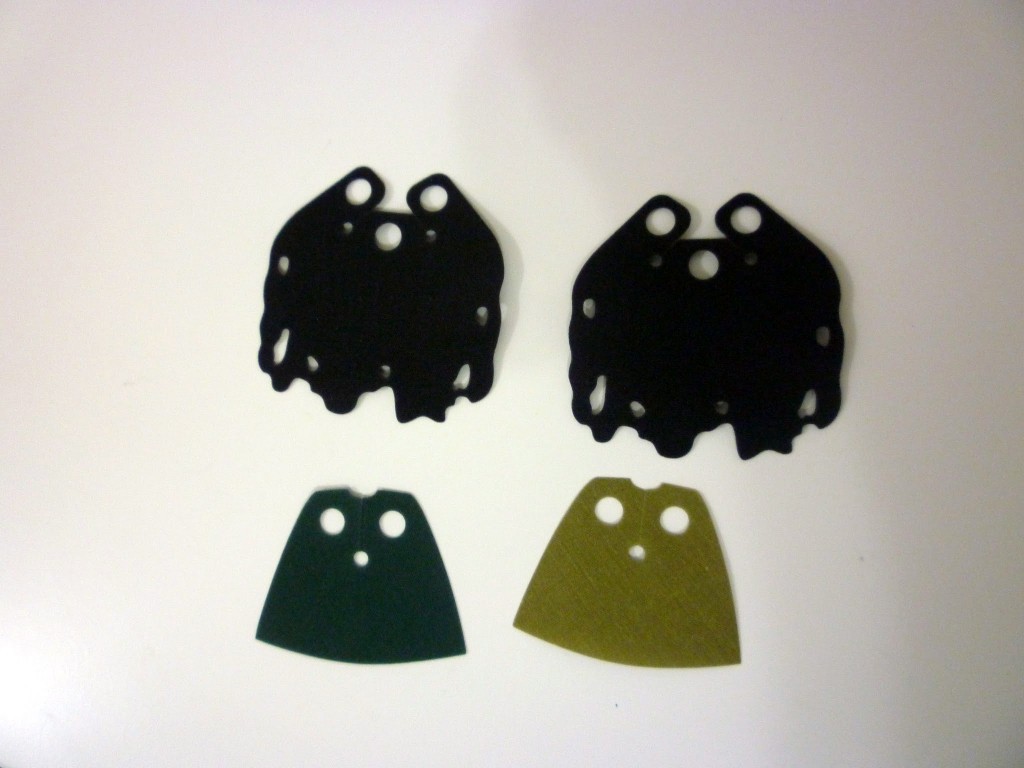 Here’s a closeup of the new Nazgul capes as well as the Hobbit capes as well. Frodo’s Dark Green is identical to the one in Shelob Attacks but we’re treated to a brand new cape in olive(?) green for Merry! They could’ve slapped on an identical cloak for Mr. Brandybuck but I am quite delighted they went above and beyond to make him stand out from Frodo. More on the Hobbits in a while. 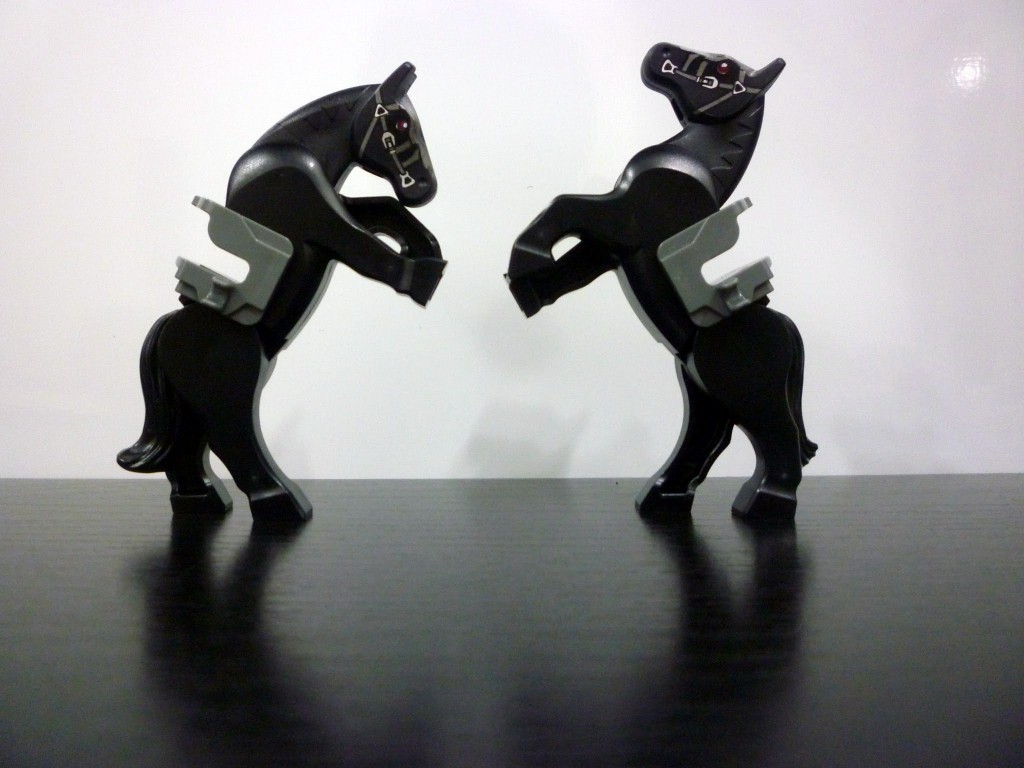 Now, on to one of the highlights of the set, the brand new horses and fearsome steeds of the Nazgul! These are the brand new breed of horses that do magical things with their hind legs (they’re posable), allowing them to rear upwards and look really horselike. I must say, these new horses alone make the entire Lord of the Rings line worthwhile. 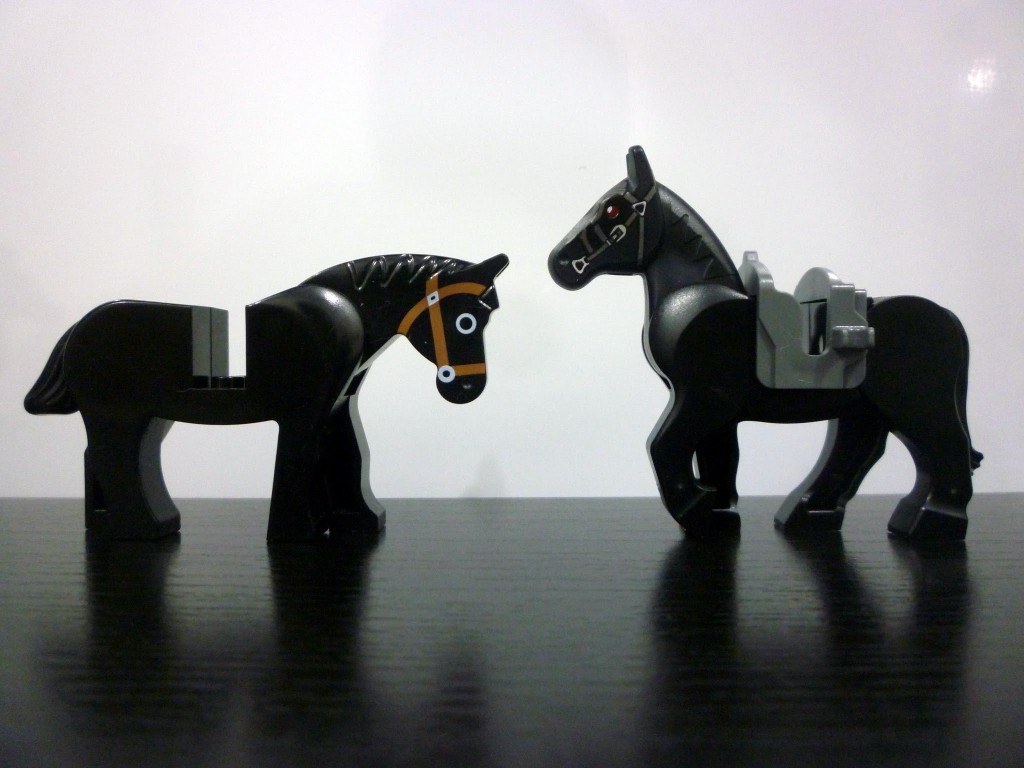 It was a long time coming – the older horses (left) were starting to look their age. The newer horses are simply magnificent with more defined curves, more detailed ears as well as more elegant legs and hooves. Their snouts also saw a drastic improvement in making them look a lot more organic. 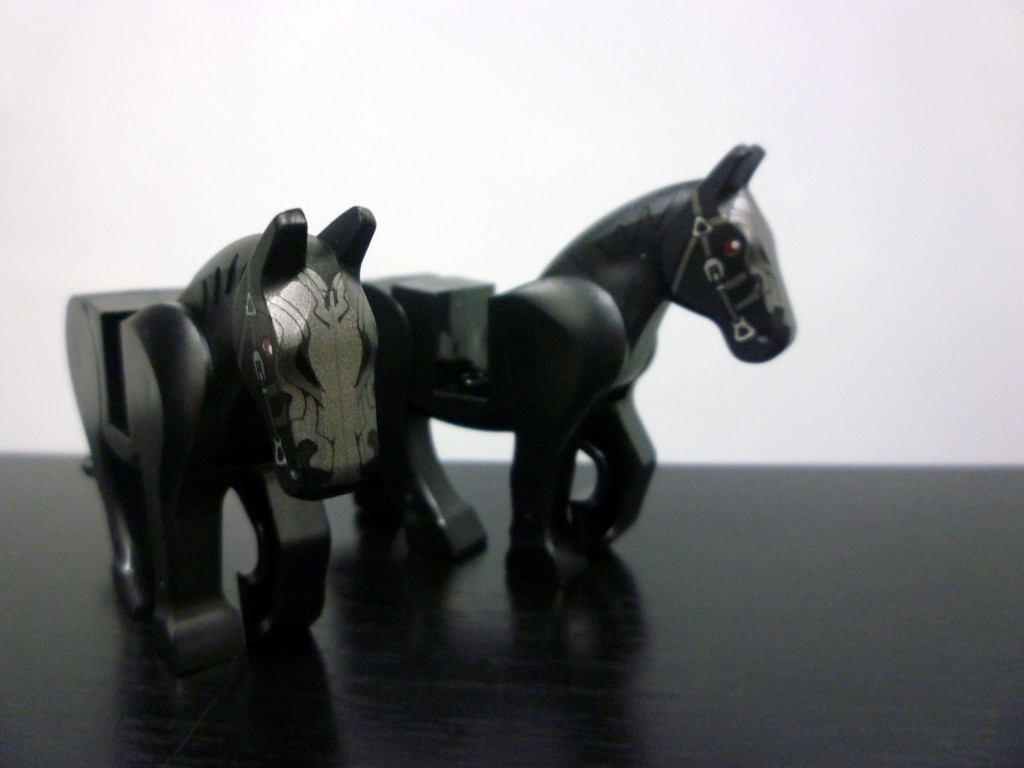 The Nazgul’s steeds have amazing printing on their heads, looking very much like armour as well as very finely painted on bridles. Their red eyes just seals the entire package together making them look particularly sinister. 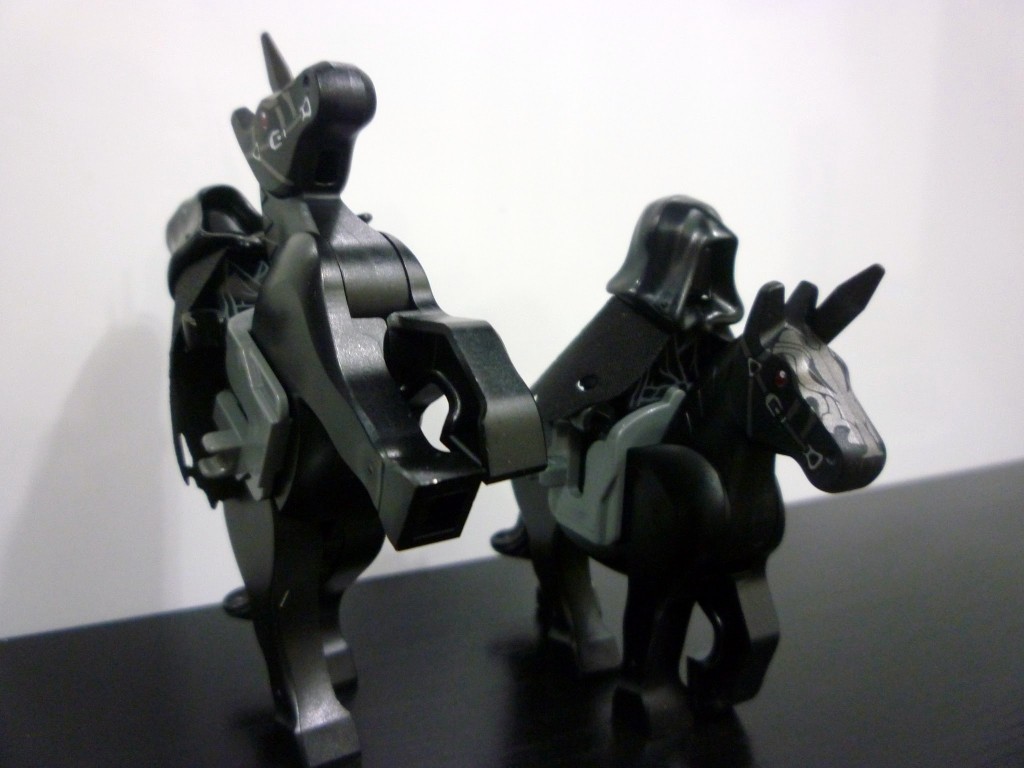 Here are the Ringwraiths on their horses, perhaps ready to give chase to Glorfindel (Arwen in the movies) as he rescues Frodo and leads him to safety in Rivendell after getting stabbed at Weathertop. 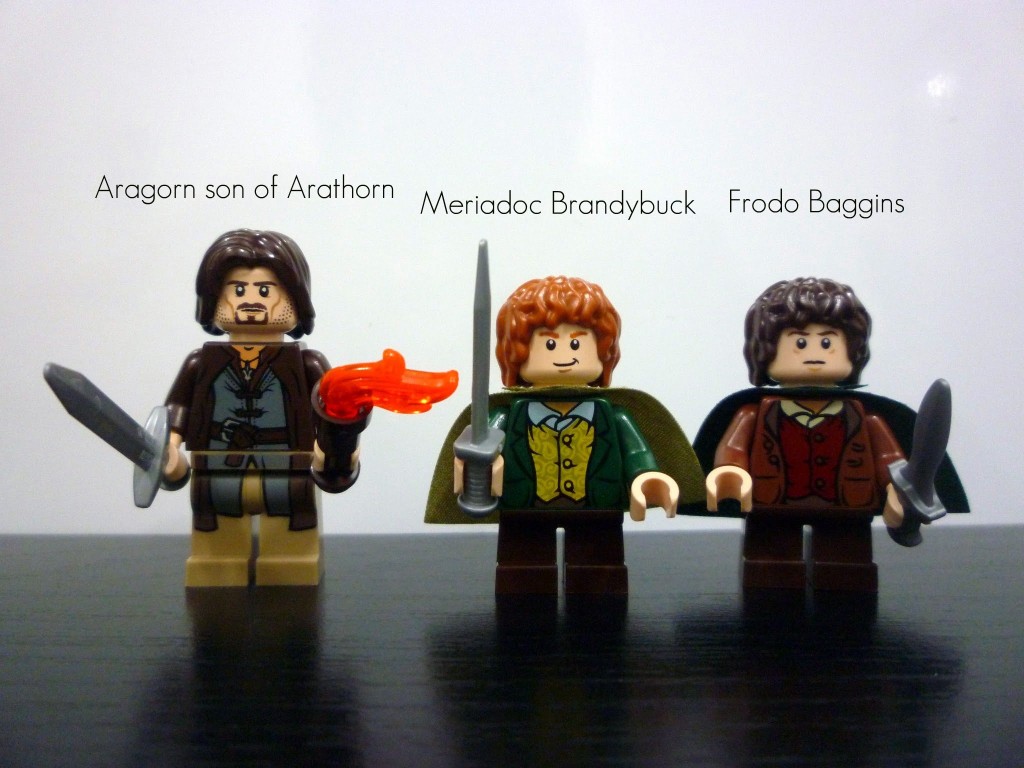 On to the good guys, Aragorn, Merry and Frodo! Aragorn also appears in Helms Deep so he’s not too unique but a very welcome addition to the set since his presence at Weathertop was instrumental in the books. Merry is one of my favourite Hobbit minifigs, sporting a very cool green and yellow garb, and Frodo is almost exactly the same as the one in Shelob Attacks save that he sports a grey Elven cloak in the other set. 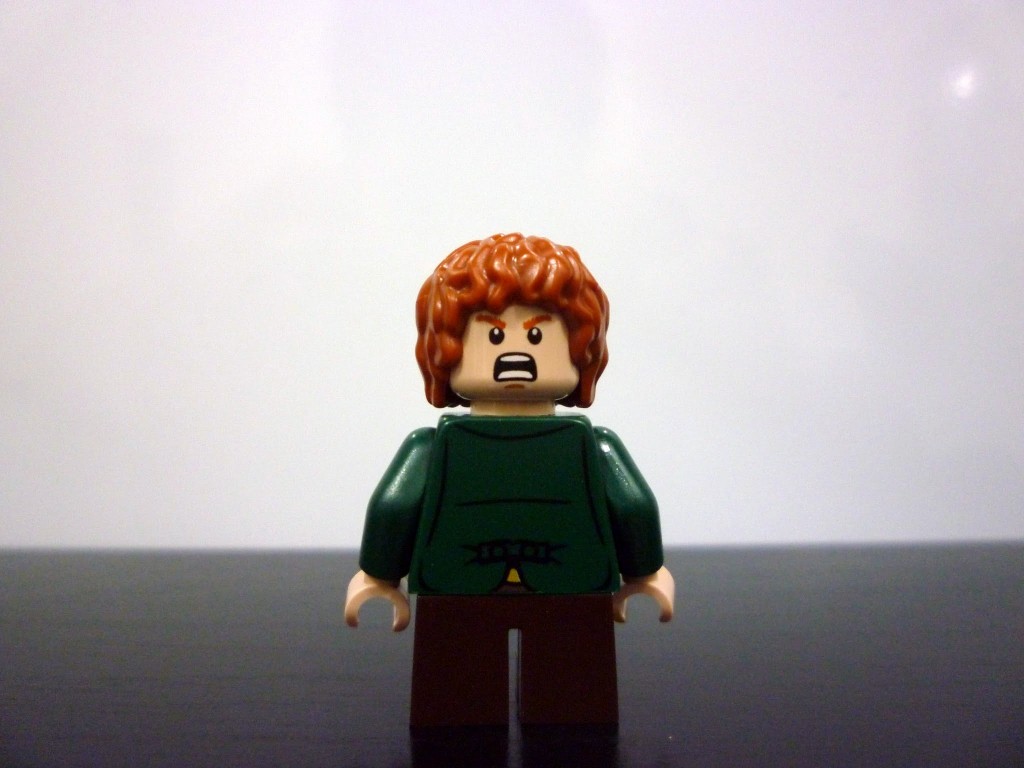 Here’s Merry from behind with more great back printing and an expression that I describe as shocked and determined. Very fierce eyebrows going on! He’s also equipped with a shortsword to defend himself.

Strider, heir of Isildur and all-around good guy. I didn’t feel like they did Aragorn’s character a lot of justice – his hairpiece looks great but there’s something wrong about his face that I can’t quite pinpoint. Might be the cheekbones or his glazed expression. Anyway, Strider’s Ranger garb is alright, it doesn’t strike me as very attractive or interesting. I think his khaki pants are WAY off – they don’t make him look very outdoorsy. Also, I would’ve think that a cape or a cowl would’ve been greatly improved Aragorn’s look. On the plus side, Lego was nice enough to include back printing, to give his clothes a little texture. Nice touch. 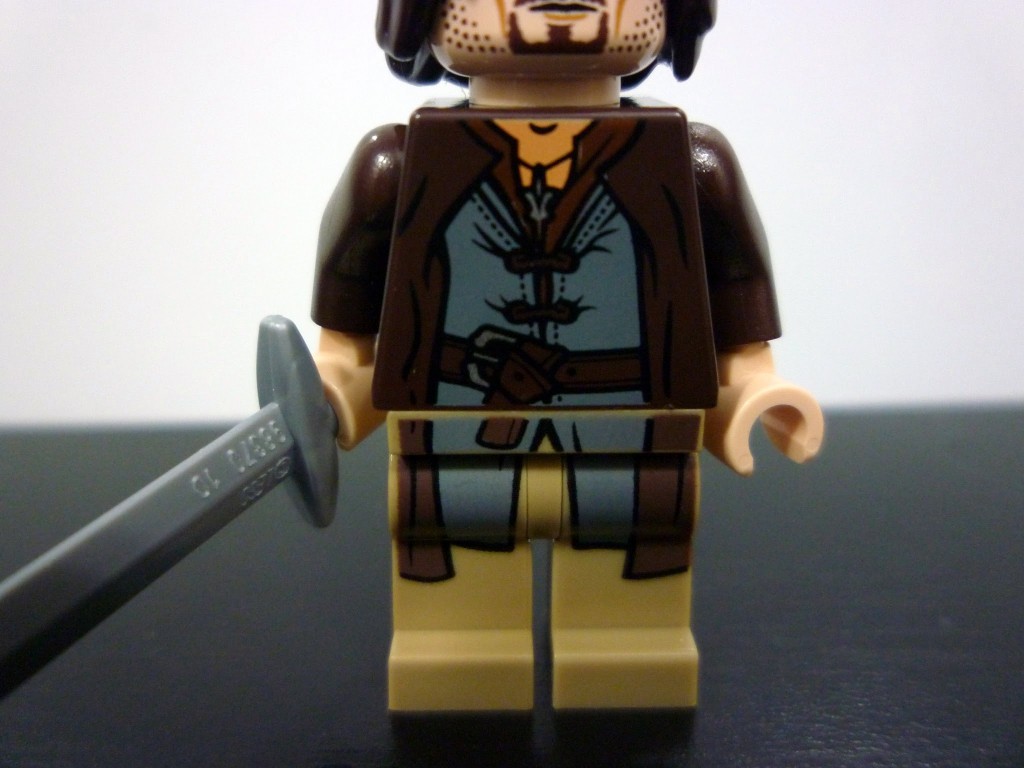 Some very cool attention to detail going on here, Aragorn’s wearing the Elvish necklace that Arwen gave him in the film at Rivendell. What I didn’t like is the glaring difference in colour of Aragorn’s neck and his head – Lego seems to get this wrong quite often. Aragorn comes with a torch to set those Nazgul on fire as well as a standard longsword. 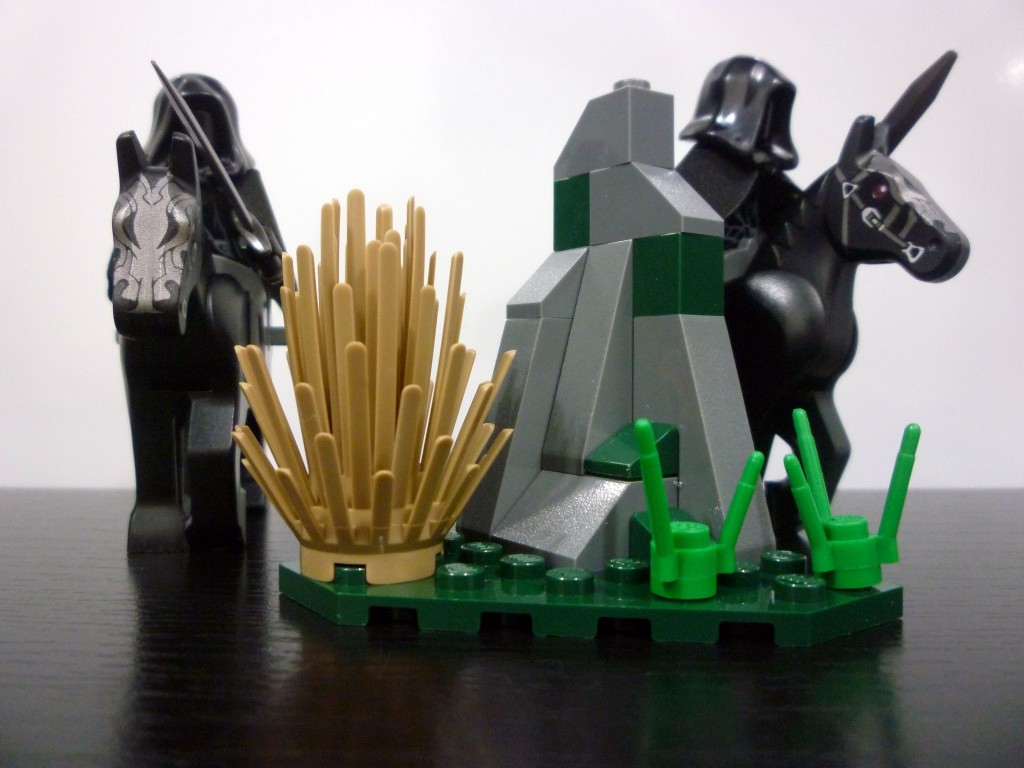 The first bag builds this little patch of rock and various shrubbery. Kinda felt like an after-thought on Lego’s part to bump up the piece count (I’d rather they had use the pieces here to populate Weathertop’s scant top). Anyway, it looks like a place for the Nazgul to hide-out before getting on with their assault on Weathertop. Nice bunch of slope pieces and a tan bush. Feels like it’s the most out of place part of the set.

The remaining bags build the iconic Amon-Sul or Weathertop. They used some really ingenious building techniques to enable it to look curved, something I personally haven’t really encountered when building. 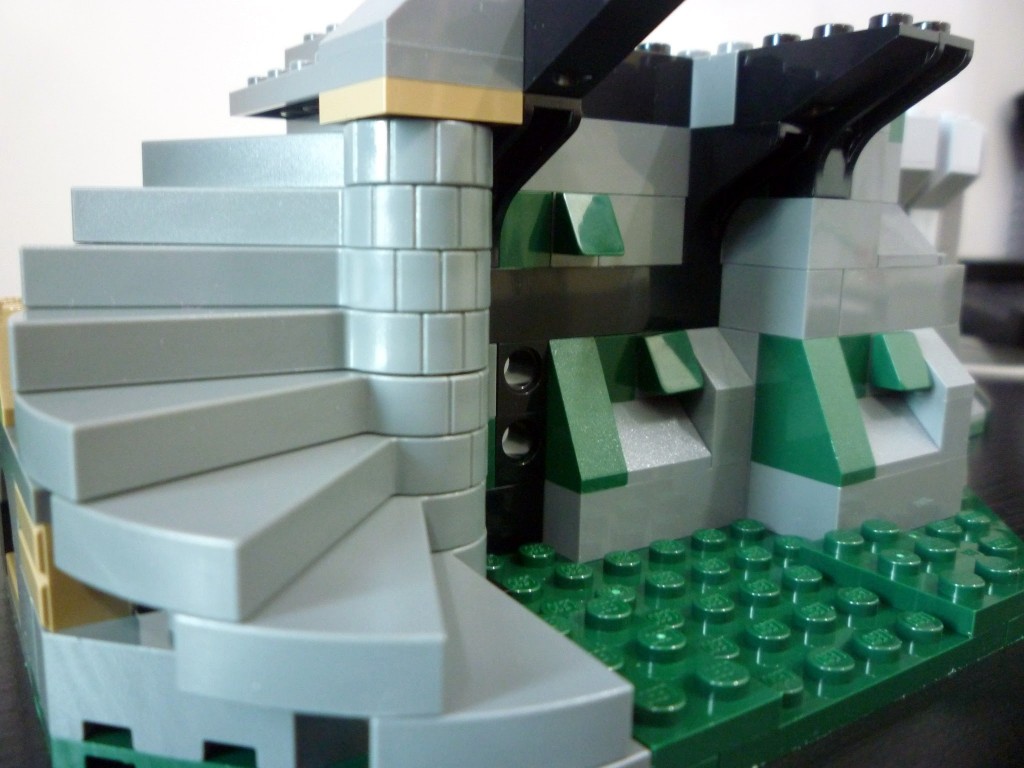 One particular highlight of the build is this excellent staircase, which allows the Nazgul to ascent to the crown of Weathertop. The staircase is situated right next to the Hobbit’s campsite. 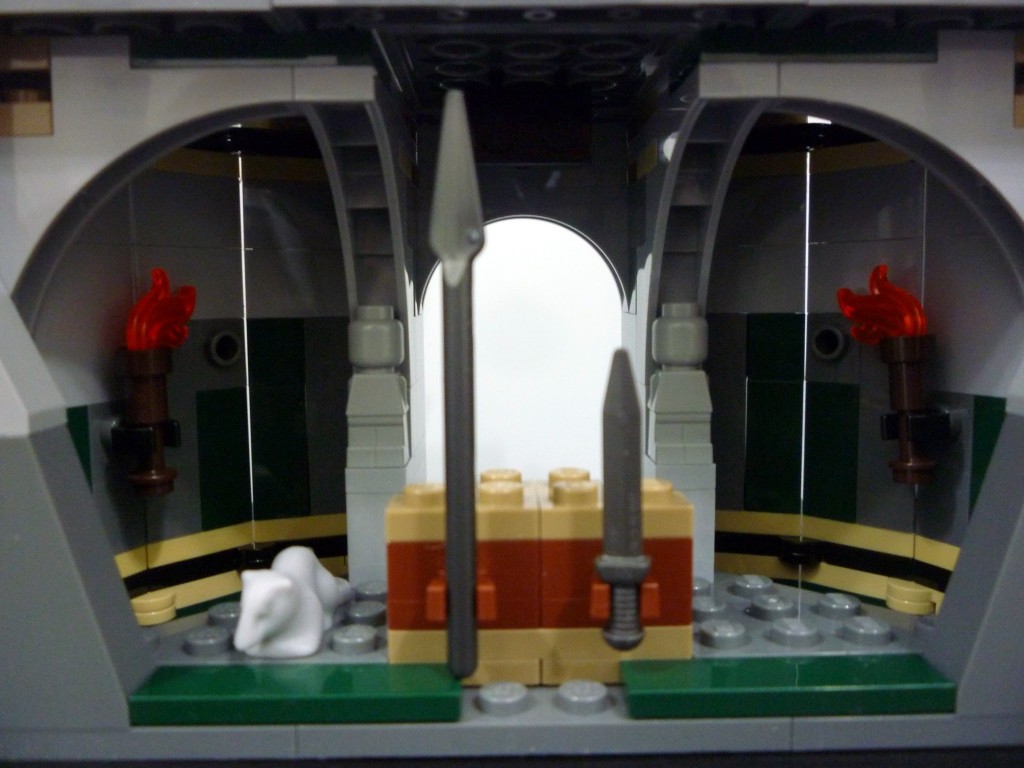 Here’s a look at Weathertop’s interior. The whole set snaps apart to reveal its fairy detailed insides. Here’s the main portion where we have some sort of weapons stash (this was definitely NOT in the movie or books) which is lit by torches and is also home to a rat (nice).

Here’s the completed structure, showing it’s exterior and interior. On the right, you’ll see a strange room with some sort of black pedestal in it. No idea what that’s for, but that’s where the flick fire missiles are. Flick fire missiles on Weathertop are so out of place, but I guess kids need something to play with.

Here’s a look at Weathertop when it’s snapped shut from different angles. The build was fantastic, one of the most fun sets I’ve ever constructed as it employed the use of a ton of different cheese slopes to give it a very craggy look. It’s been quite awhile since I’ve actually gotten to build a proper Castle-ish set, so you can see why I’ve been so excited about the Lord of the Rings sets. 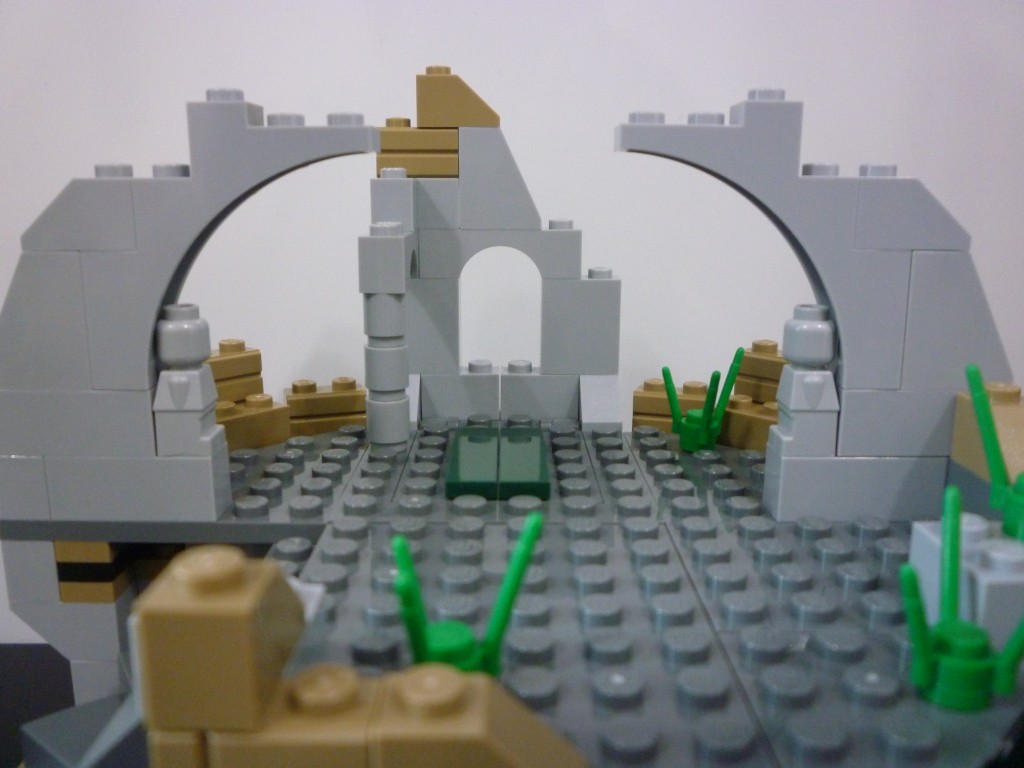 The top feels a little bare and half-assed, though. We do get some microfigs to adorn the arches and some sparse vegetation, but overall, compared to the detail in the rest of the set, it feels extremely sparse. I liked the use of the new brick-pieces around the edge, but frankly, it was a little underwhelming. 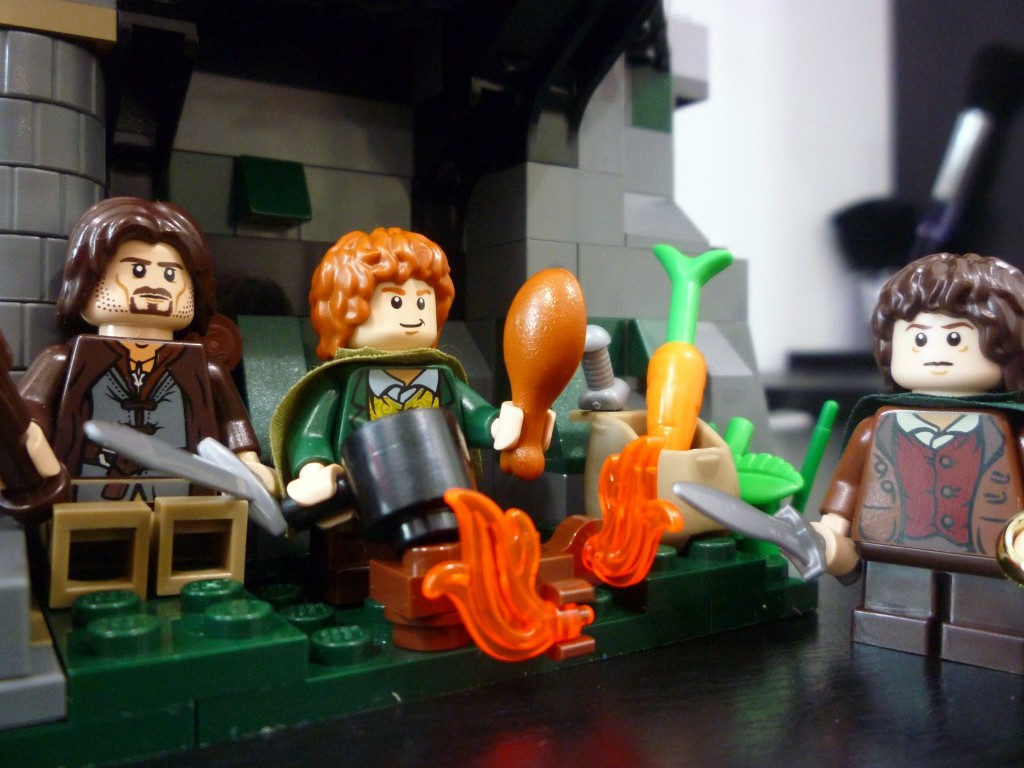 Here’s the Hobbits having a little campfire going on and barbecuing their food. 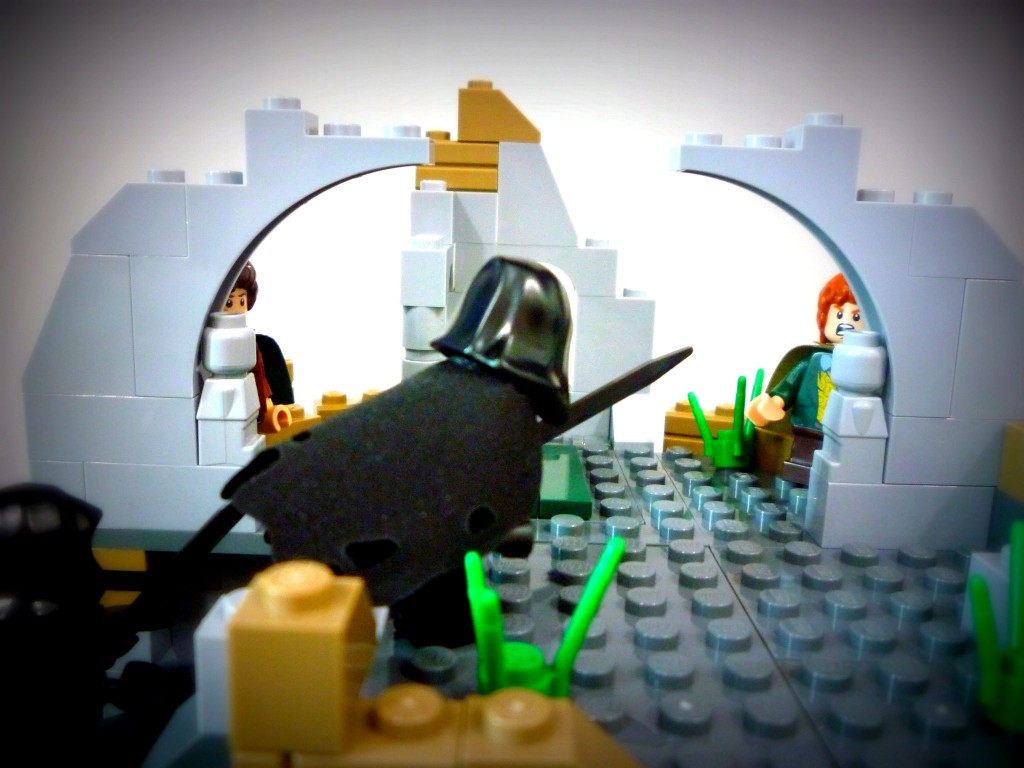 Now, on to more exciting shots with the Nazgul attacking Weathertop in search of the One Ring. 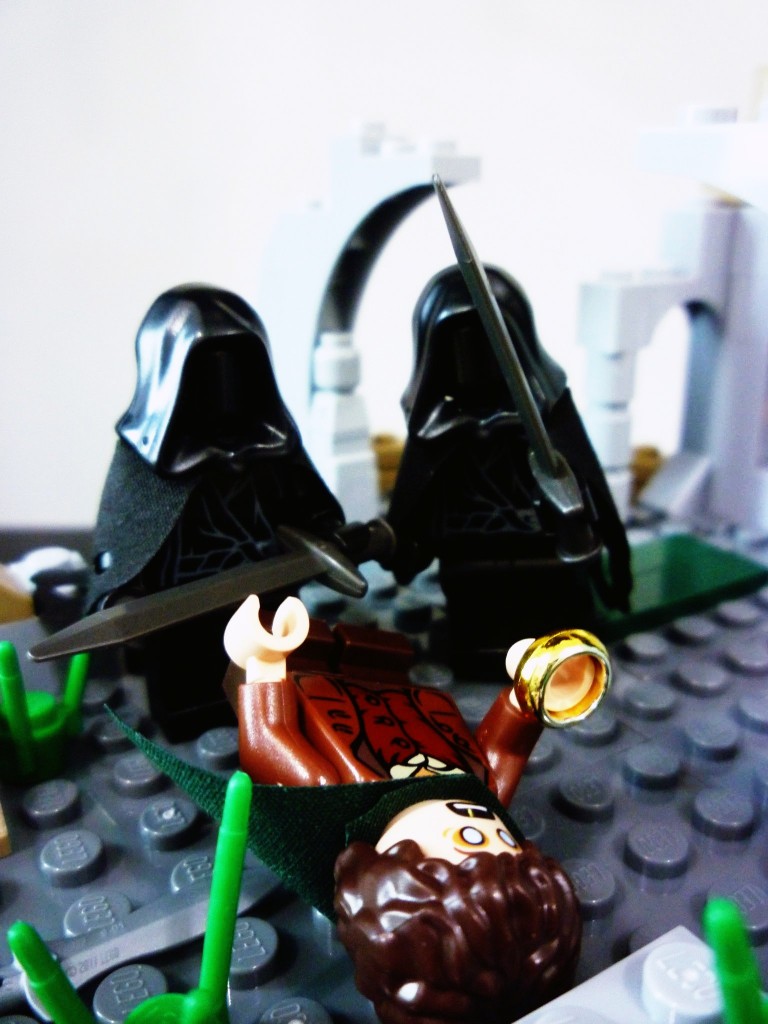 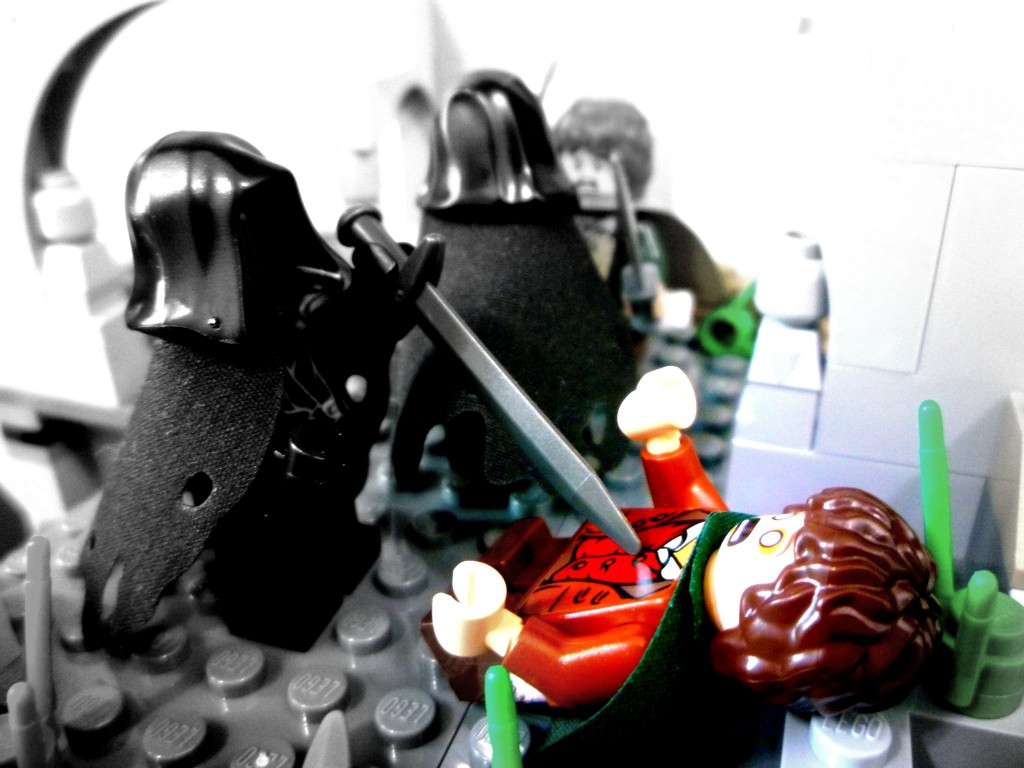 Tried recreating the iconic scene where Frodo gets stabbed by a Morgul-Blade. 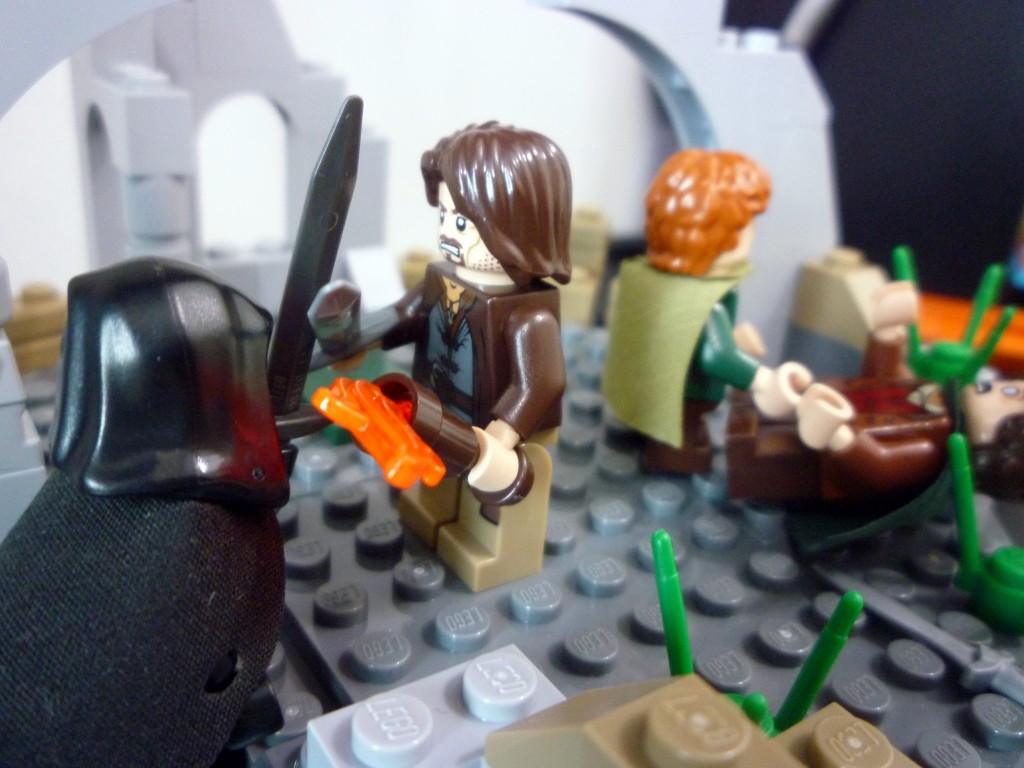 Oh, Aragorn to the rescue, as Merry rushes to Frodo’s aid! 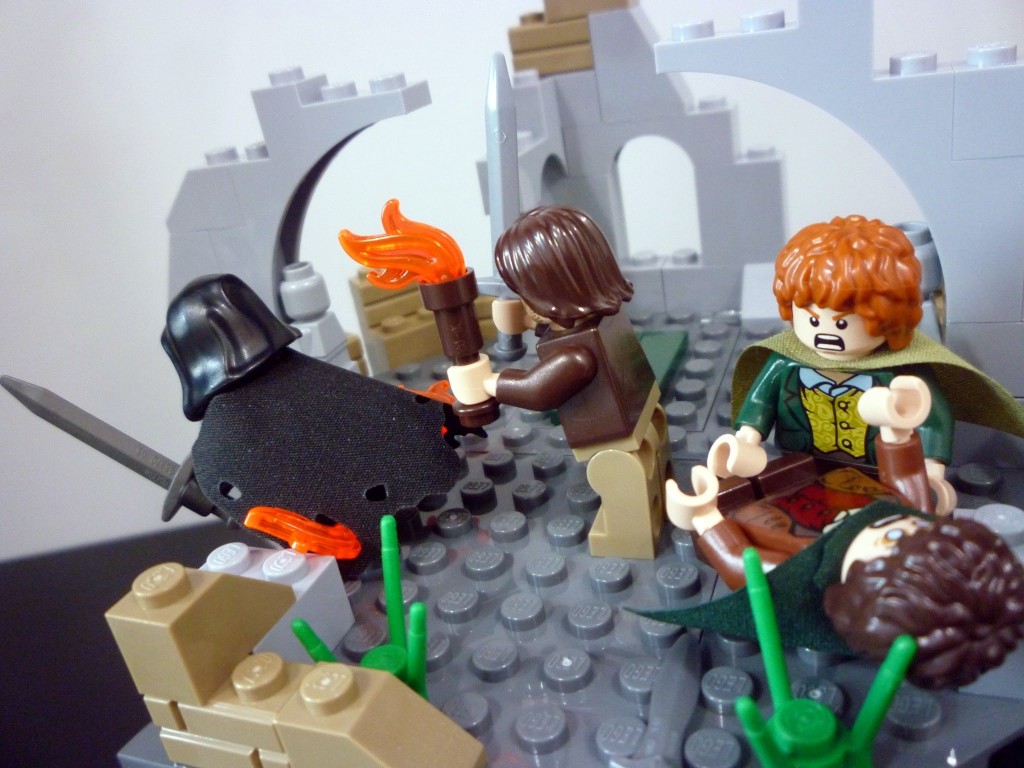 One of the great things about the holes in the Ringwraith’s cape is that you can fit fire pieces into it. Perfect for when Aragorn sets them on fire! 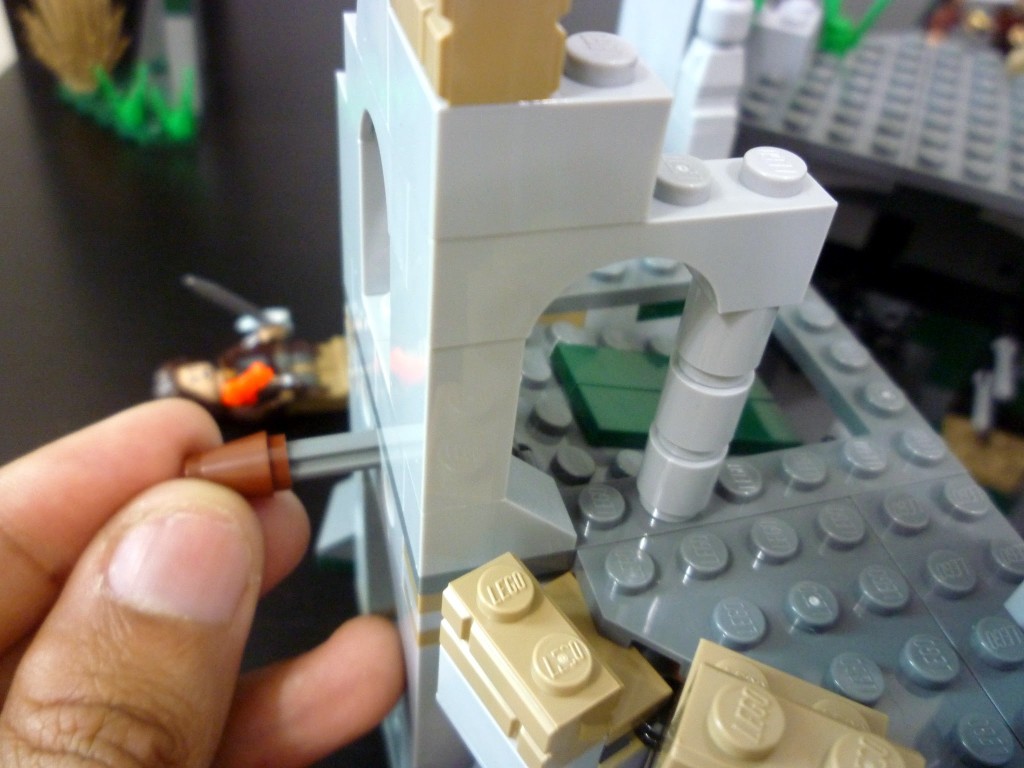 One more play feature of the set, which was quite well done – a trap door that allows you to  drop a minifig of your choosing into Weathertop’s interior. 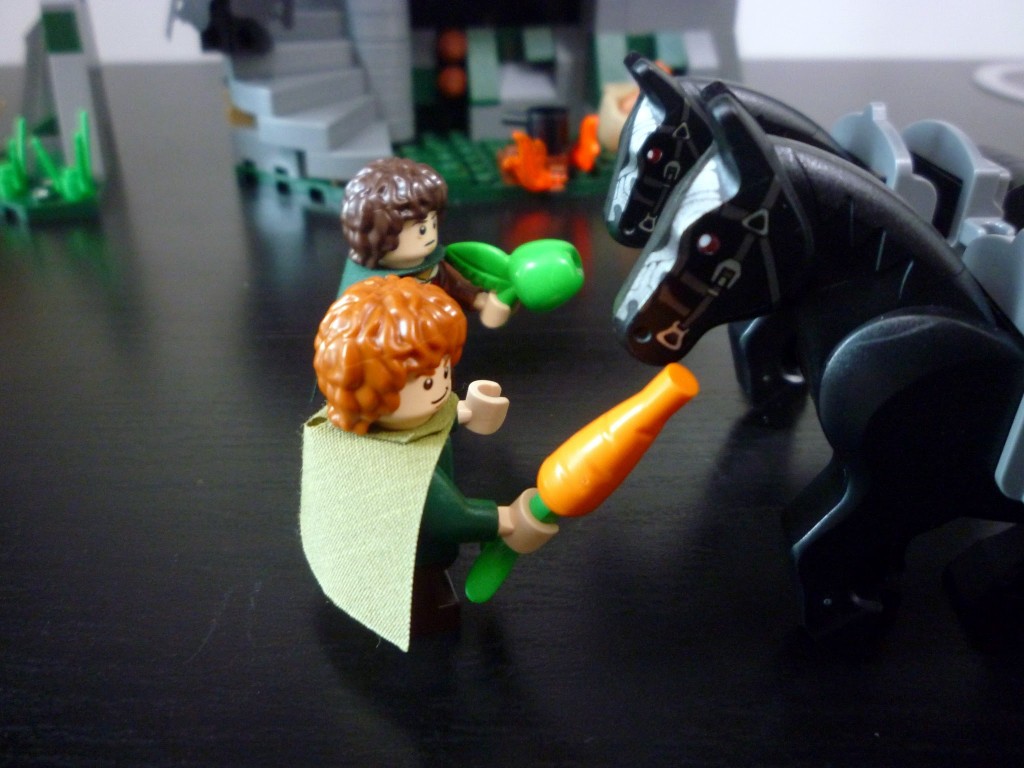 In happier times, here’s Merry trying to get friendly with the Nazgul’s horses. 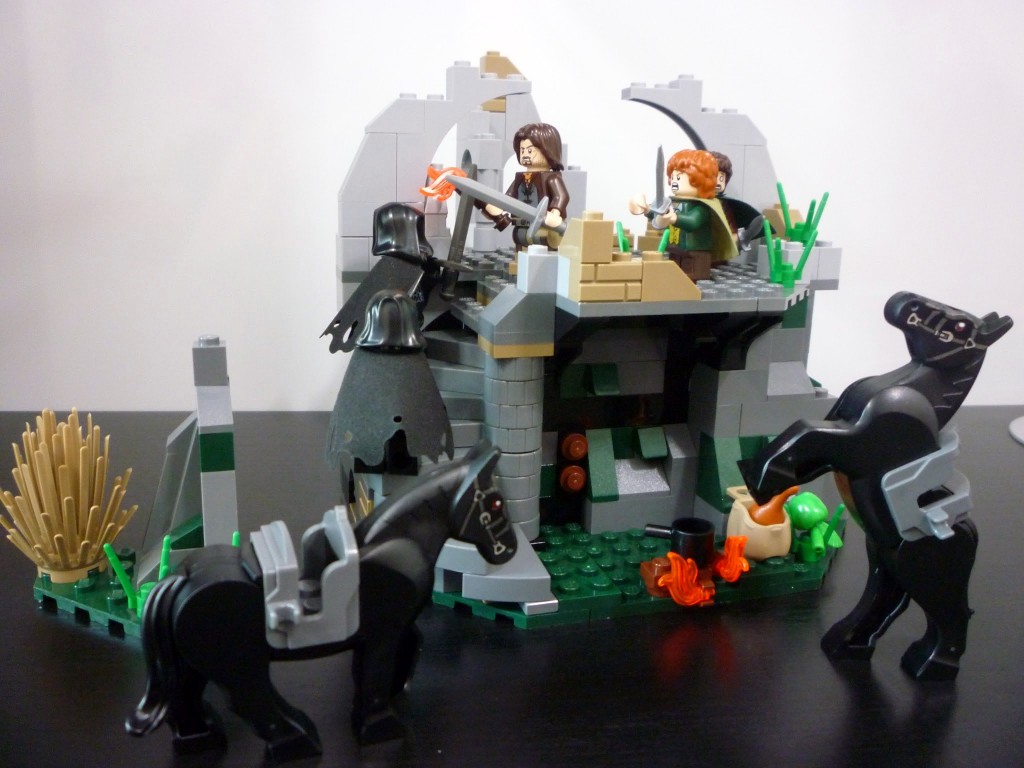 Final Thoughts: Weathertop is a really great set, with a fun build and a very decent-sized structure upon completion. If you wan’t to collect all 9 members of The Fellowship, you’re going to have to get Weathertop for Merry, but more on that I think the 2 Nazgul make this a set worth considering. Coming in at US$60 however, the price is kinda steep and you’re getting 2 minifigs (Aragorn and Frodo) that you can get in other sets. Nevertheless, I really enjoyed building this set, and it looks great as a display set. Going beyond mere aesthetics, I love that you can pop it open to interact with its interior, which I think, young kids will enjoy the play features. It’s craggy exterior and curved walls make it look very similar to the movies and overall, it makes a pretty good playset.

Should You Buy It?: It’s a little hard for me to recommend getting this set immediately, unless you’re hell bent on collecting all 9 Fellowship members immediately. Definitely get it if you’re a fan of Nazgul but to be frank, I’d wait out till this set is discounted for it to be considered good value. If you’re an LotR fan, get it at once!