Not going to do a review for this set I built yesterday, because it’s a 5 year old set, so you can’t really walk into a Toys R Us and pick this one up. I got this sweet little set from a seller off Lowyat for a pretty good price. Seller was very prompt with her service and shipping as well, which was great.

This is my very first Star Wars since 7121 (all the way from 1999, which also so happens to be one of the very last Lego sets I ever bought!) so I was pretty stoked to get it. Now, I’m not a big Lego Star Wars fan, seeing as how my Dark Ages completely coincided with the best years of the series, but I do consider myself an okay Star Wars fan. 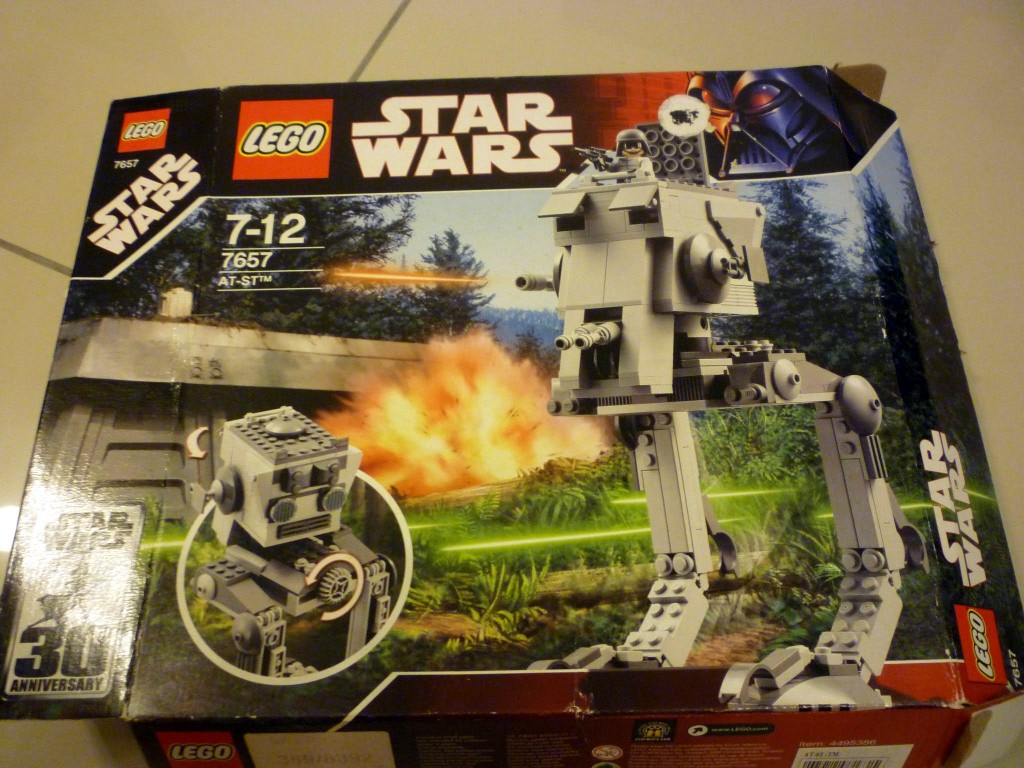 Here’s the box of the AT-ST, a vehicle that’s almost as iconic as the Tie Fighter, X-Wing and AT-AT. We get a few peaks of the AT-ST in Episode 5, but we only get to see the AT-ST shine in Episode 6 when the rebels attack Endor in hopes of taking down the Death Star’s shield generator. 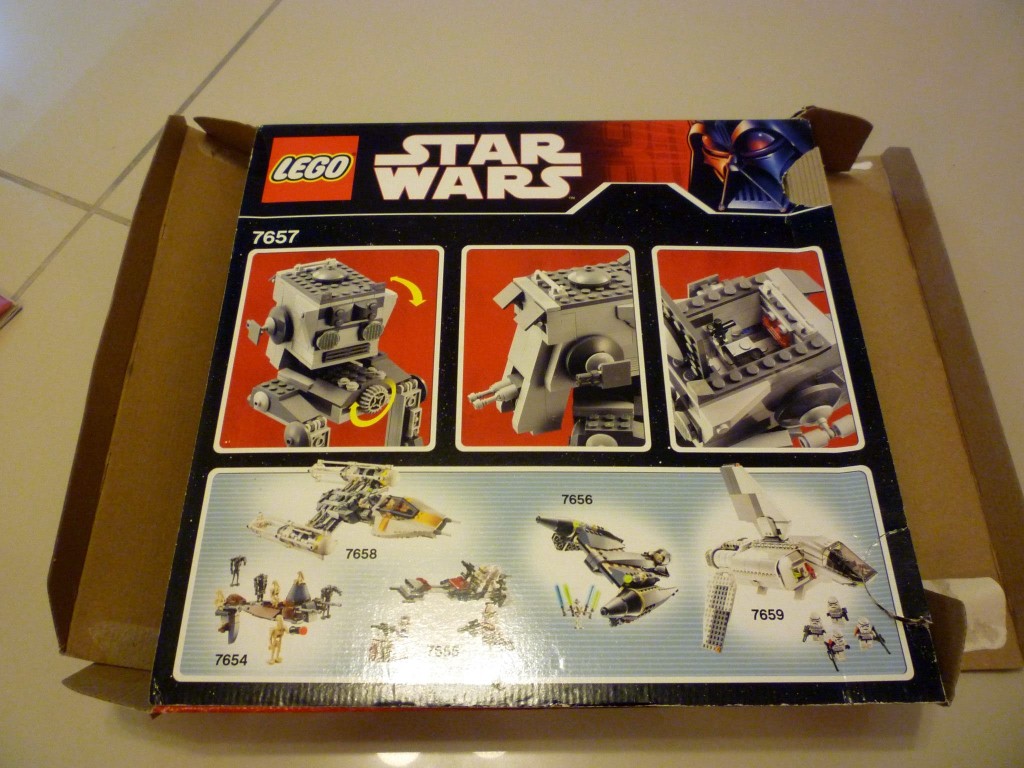 Here’s the back of the box. 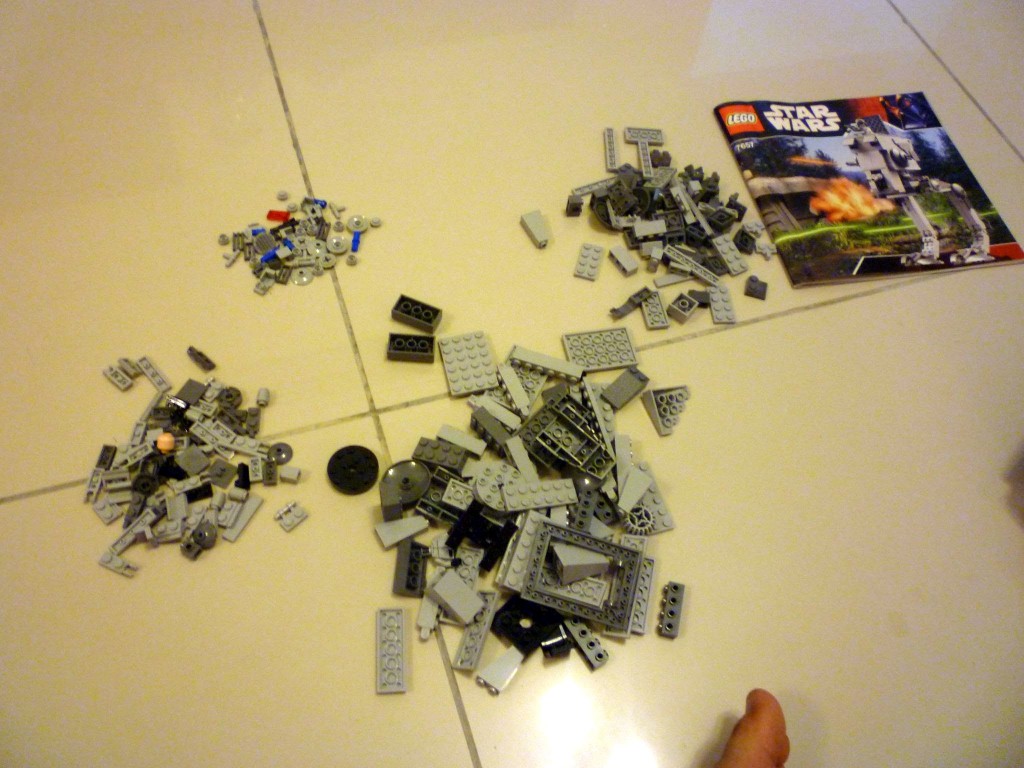 Here’s how every great Lego build begins. Sorry for the bad pictures, I was watching some TV when I decided to build this. 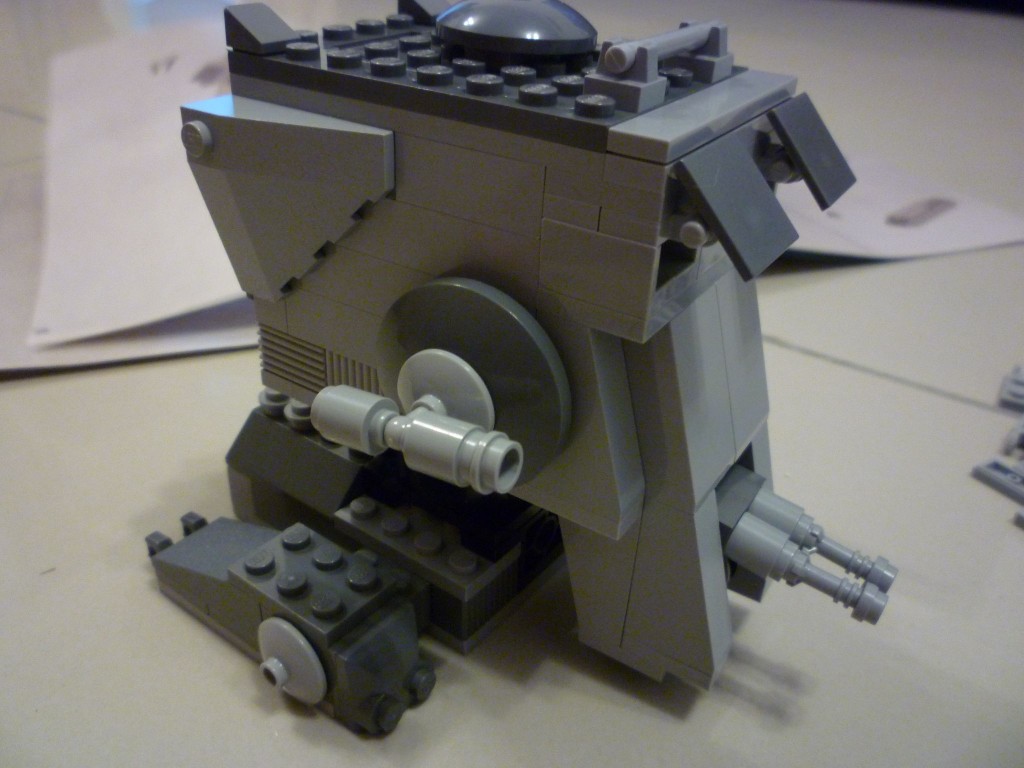 You begin by building the body of the AT-ST. I don’t know if this because this is my first Star Wars set, but I think the attention to detail here is great. Maybe because Lego bricks have that similar primitive shape which matched the materials George Lucas used to design the AT-STs. 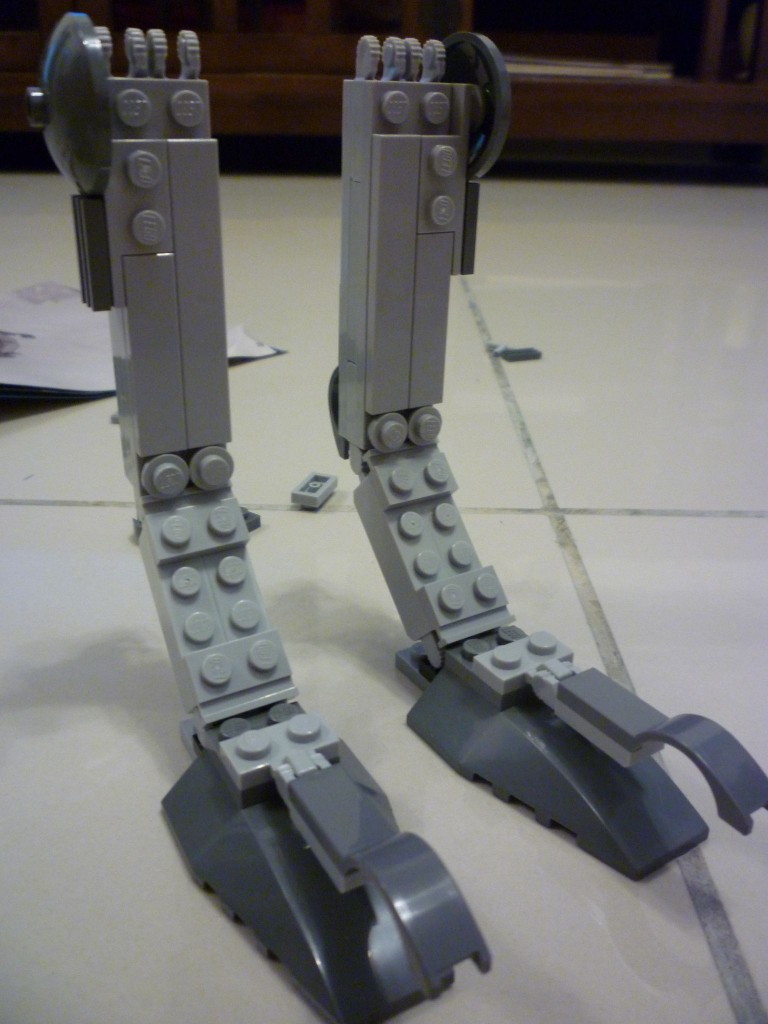 Next up we have the chicken-walker legs. Initially I had my doubts of the sturdiness, because the legs seemed pretty flimsy. So you put the body and legs together and you get… 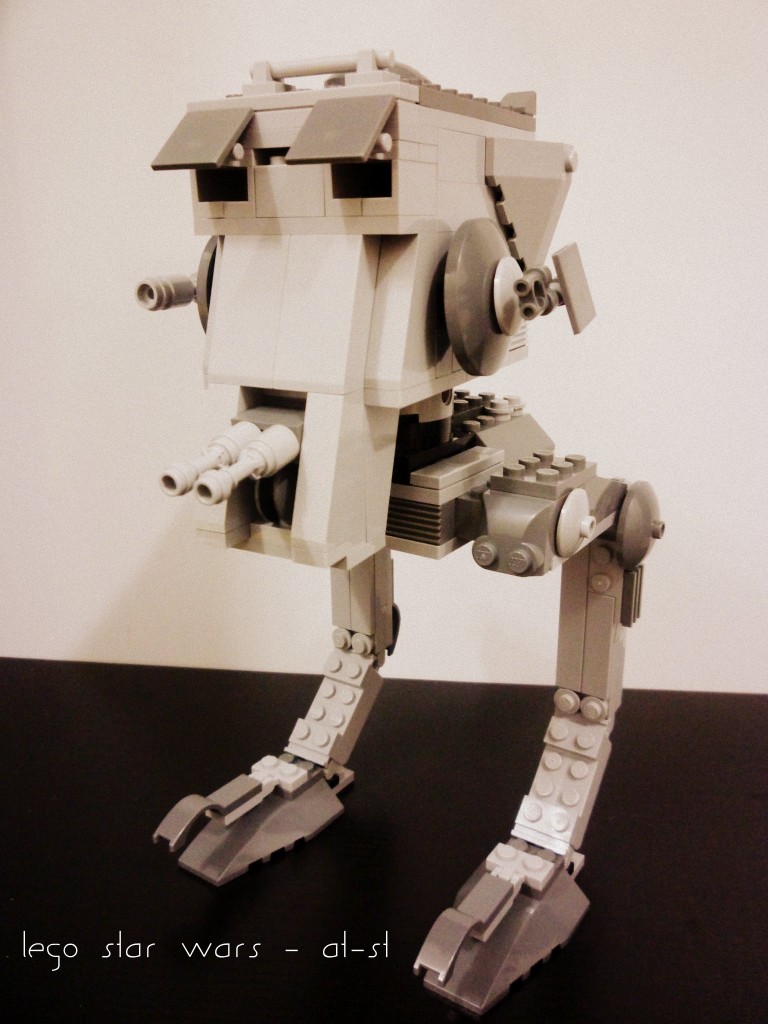 Voila, the completed product! Overall, very impressed with how accurate Lego designed the AT-ST. It’s also a pretty good size and it’s currently occupying a very nice spot on my desk. It’s actually larger than I expected and the scaling in comparison to minifigs is excellent. 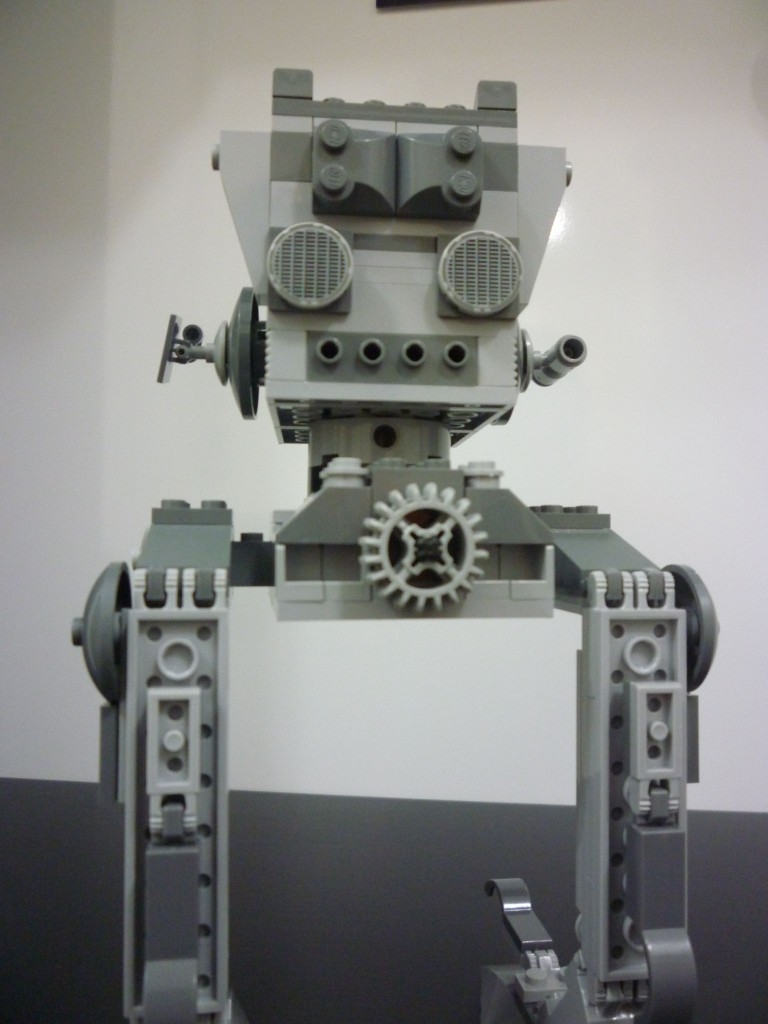 Here’s the behind of the AT-ST. The circle shaped vents are printed tiles, which is a nice touch and you also see a crank which you can turn to swivel the AT-ST’s head, which replicates the way the AT-ST moves in the movies.

Here’s it swiveling in action! It actually looks really good when it does this! 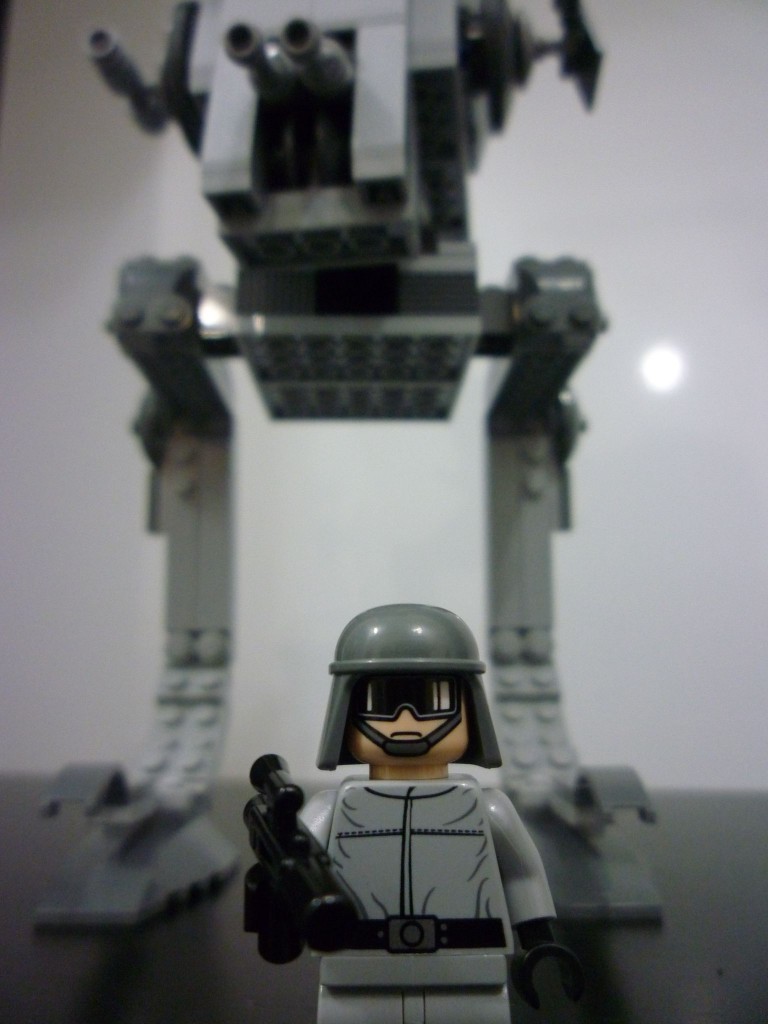 Speaking of scaling, here’s how the AT-ST fares in comparison with its Imperial Pilot. It’s a pretty cool minifig, and it comes with a blaster as well. I like the dude’s helmet and placid expression. 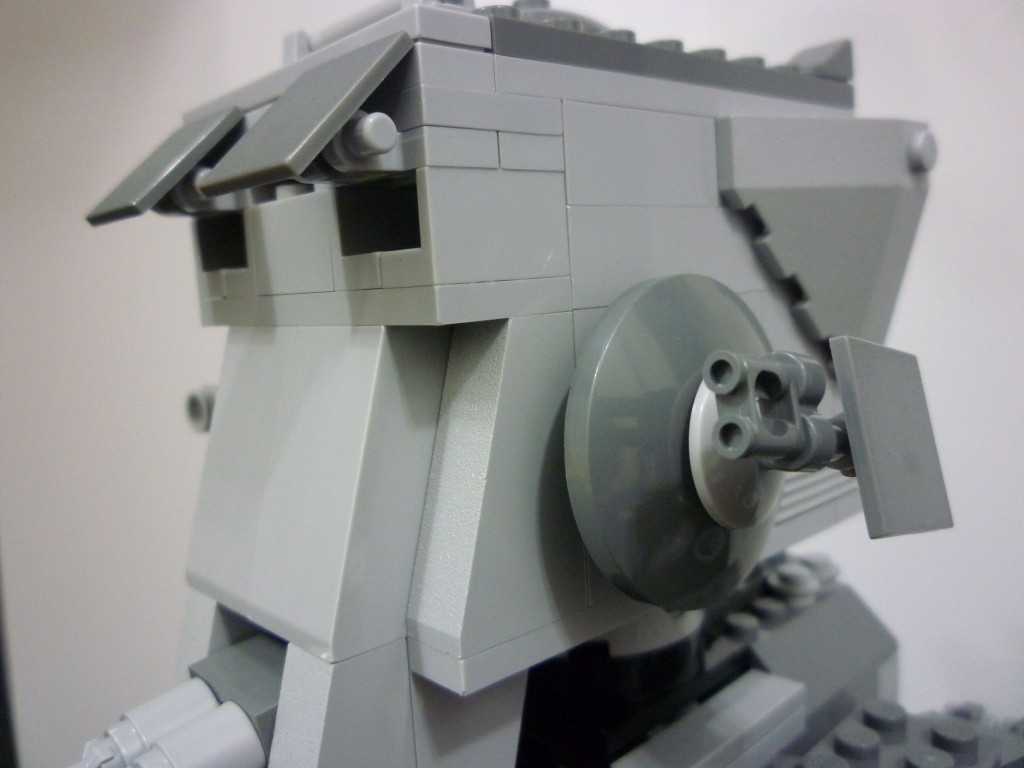 Like I said, pretty cool attention to detail. Pictured here are the side turrets, which swivel as well as the vents so the pilot inside can see outside and doesn’t get cooked alive! 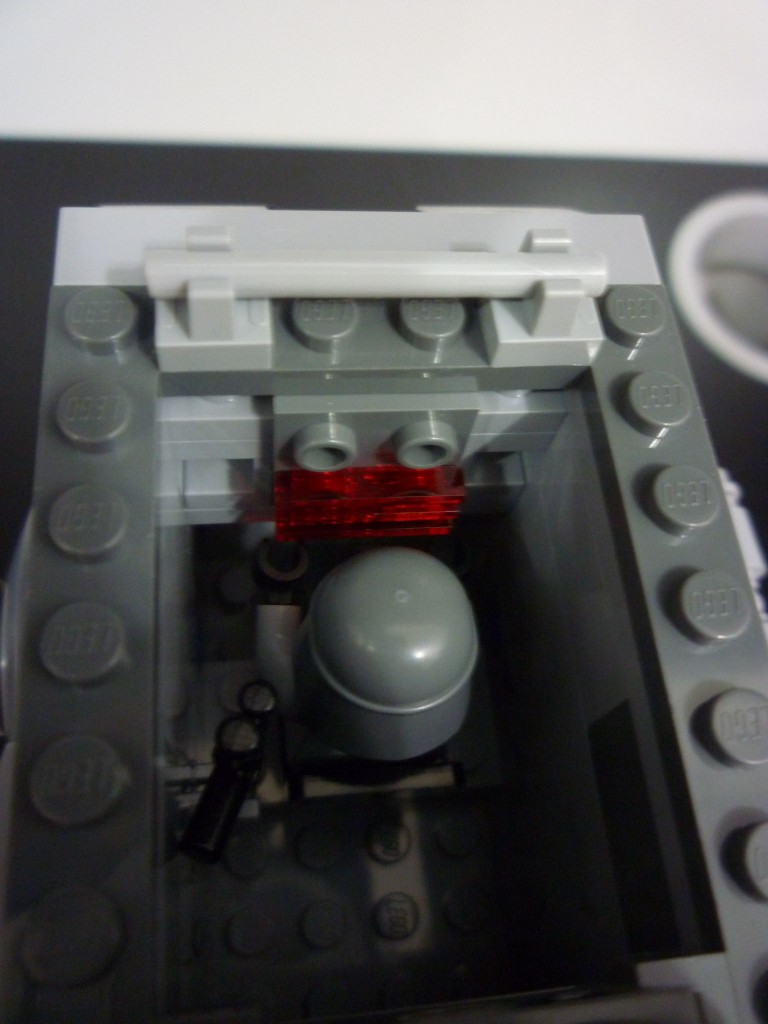 Here we see the Imperial AT-ST pilot in his cramped office space. Nothing fancy inside, except a trans-red grill piece which is supposed to be his targeting reticule I think. You also get a place for him to store his blaster, handy in case any pesky Ewoks give him any trouble as he patrols the forest planet of Endor. 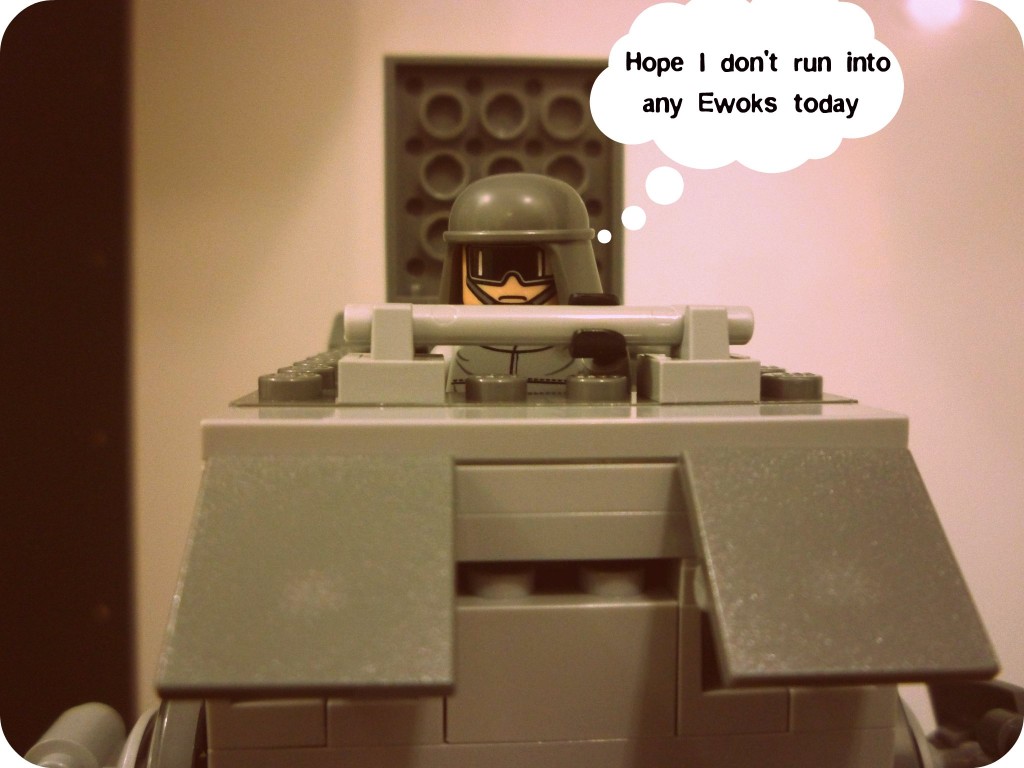 I’m glad I went ahead and bought this set. It looks really awesome on display and it’s fun to play with too. Kinda hard to find now, but if you’re a Star Wars fan, I’d highly recommend it. Since I doubt I’ll ever own an X-Wing, Tie Fighter or even Millenium Falcon (sigh) this is as close as I’ll get to owning a piece of the original trilogy in Lego form!

Need any last minute Christmas shopping, or want to add the Eiffel Tower to your collection? LEGO Double VIP Points returns this weekend from 9-13 December, along with a slew of stacking GWP offers!Here's my guide to all the GWPs and offers you could score this weekend! ... See MoreSee Less

Got some last minute Christmas shopping, or want to score the new 40565 Santa’s Workshop and maximise your VIP points? You’ll be able to score Double VIP Points on all purchases on LEGO.com from 9...
View on Facebook
· Share