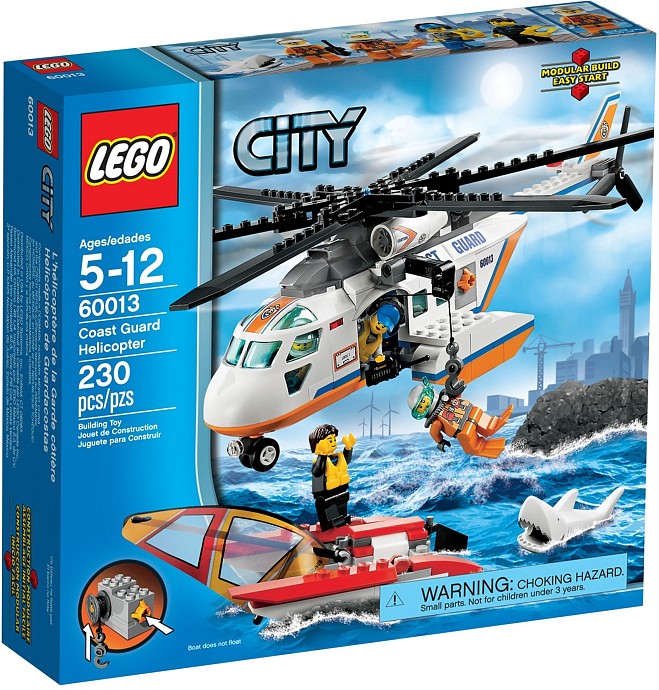 Finally, a refreshing alternative to the tons of Lord of the Rings sets that I’ve been building recently. I received the Coast Guard Helicopter as one of the many gifts from this year’s haul from Reddit’s Arbitrary Day from an extremely generous American soldier. The Coast Guard Helicopter is a brand new helicopter from this year’s City Coast Guard subtheme. Breaking away from cops, robbers and firemen, City 2013 goes wet and wild with a return to marine boats, helicopters and surfboards. 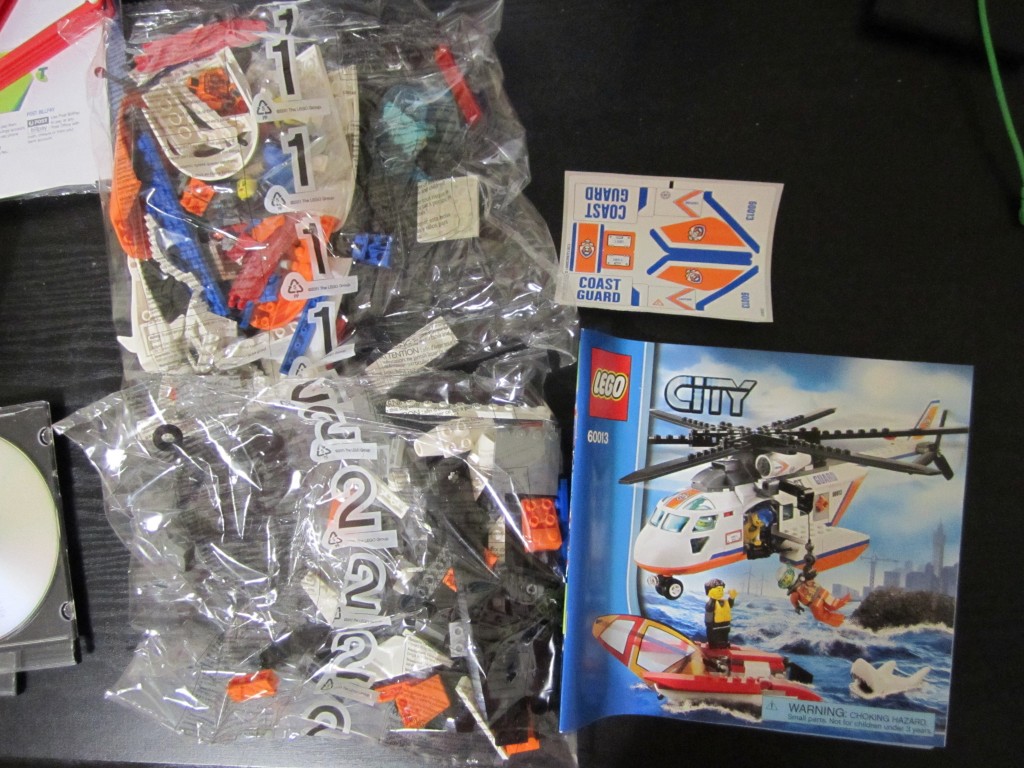 Popping open the square box reveals 2 large polybags for the parts, a sticker sheet and the instruction manual. Unfortunately, my sticker sheet got bent out of shape and was all curled up, but thankfully it didn’t warp too badly to destroy the stickers. I wish Lego would give us more cardboard backing for sets that have stickers. The instruction manual is unnecessarily thick because it allocates one page for seemingly each simple piece that you place. I’d prefer that they shrunk the manuals which will save costs and either give us more printed pieces or cardboard to protect our stickers and manuals from warping. 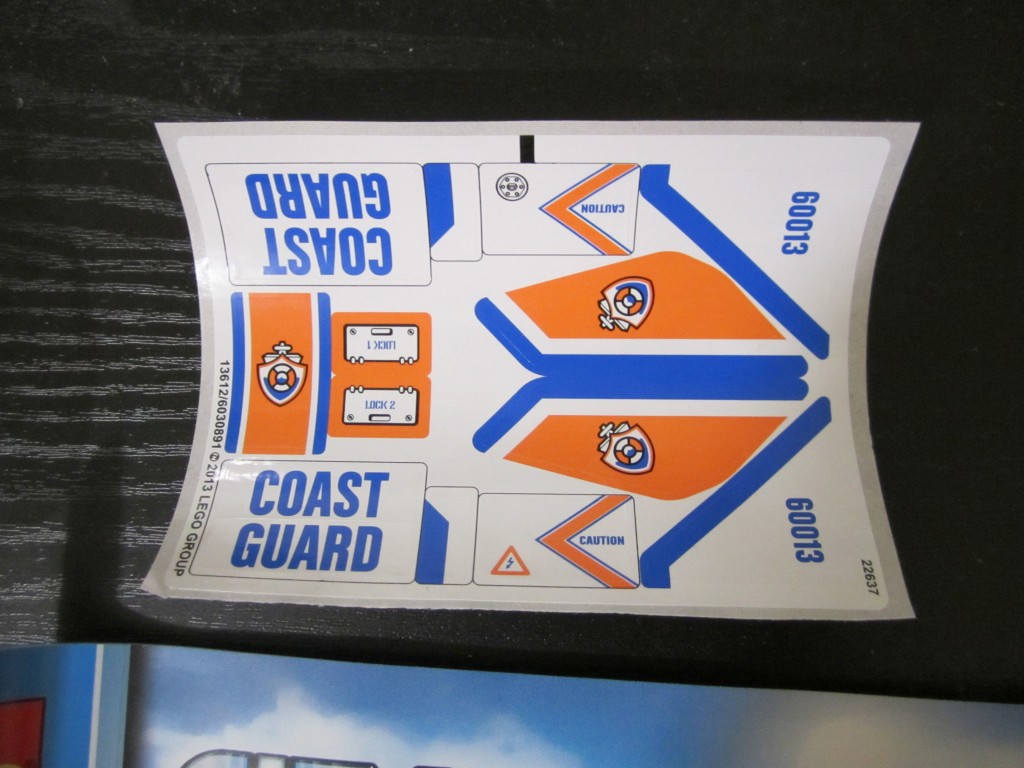 Here’s a closer look at my slightly warped sticker sheet. Pretty typical of city sets, with the set’s number code as well as some added flourishes such s the Coast Guard coat of arms. 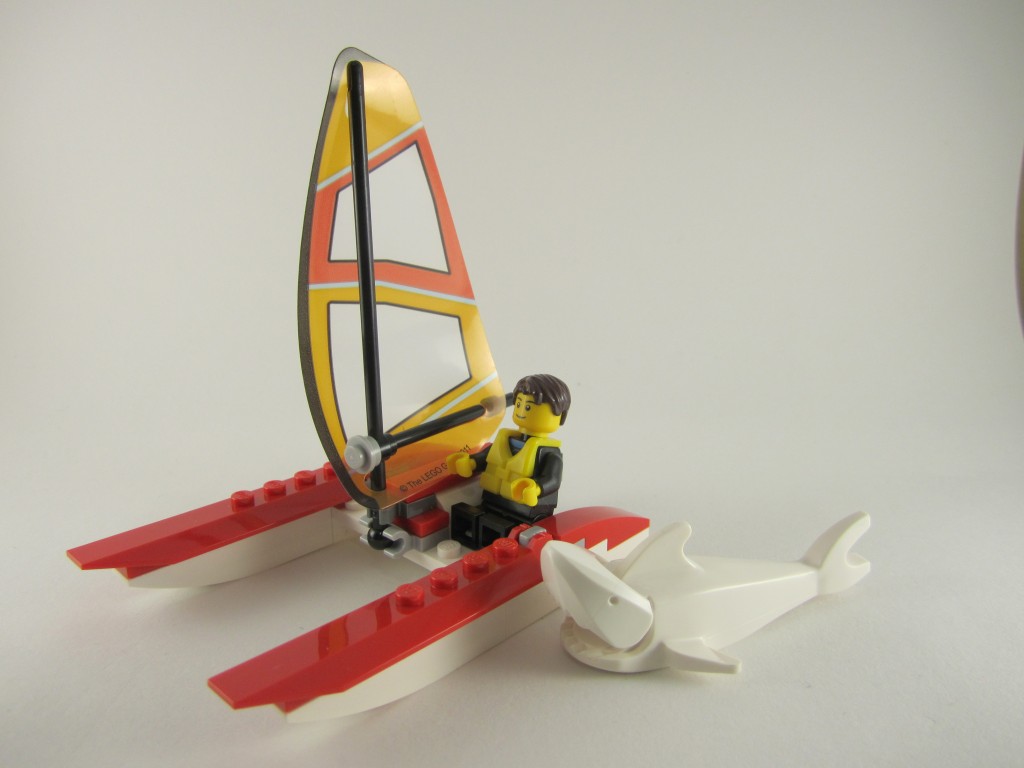 Bag 1 contains all the minifigs, the small sail boat pictured above, and the frame and base of the helicopter. Oh and a white shark, which is quite possibly the best thing ever! The sail boat looks sleek, thanks to the slopey piece towards the end and is made out of nice bright basic colours. 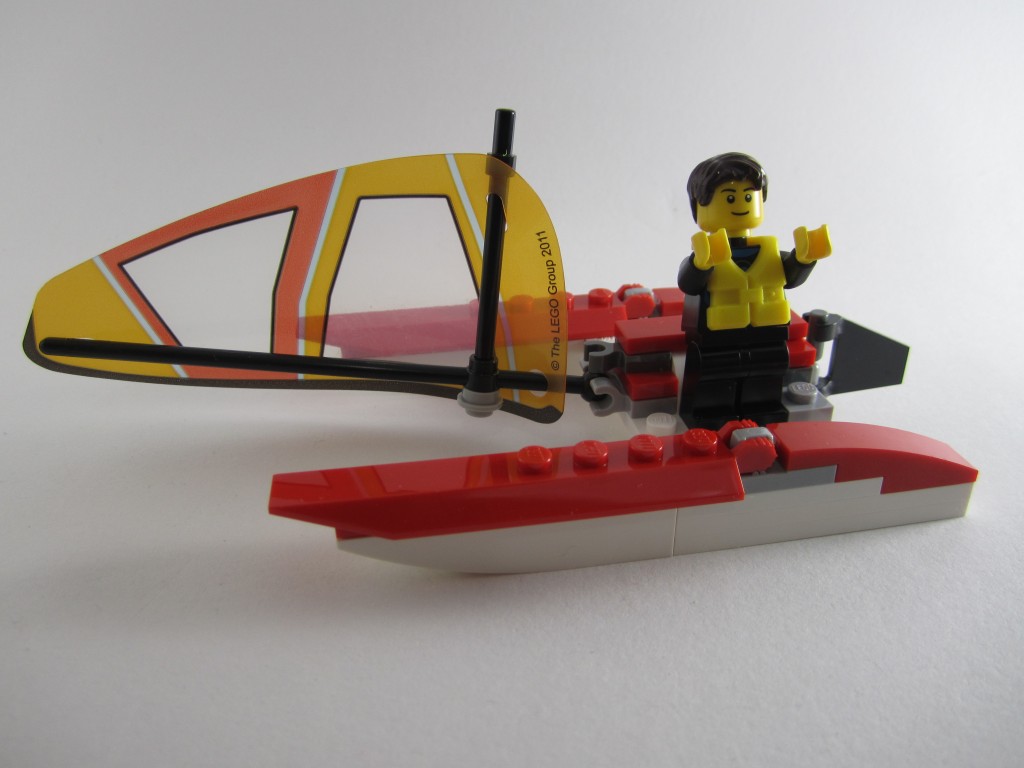 The mast is attached quite flimsily through a ball joint a claw piece which allows it to bend and slightly “fall over” when you tip it over. When doing so I’ve found that it detaches itself more often than none especially if you unclip it too forcefully from the claw piece that secures it in place. 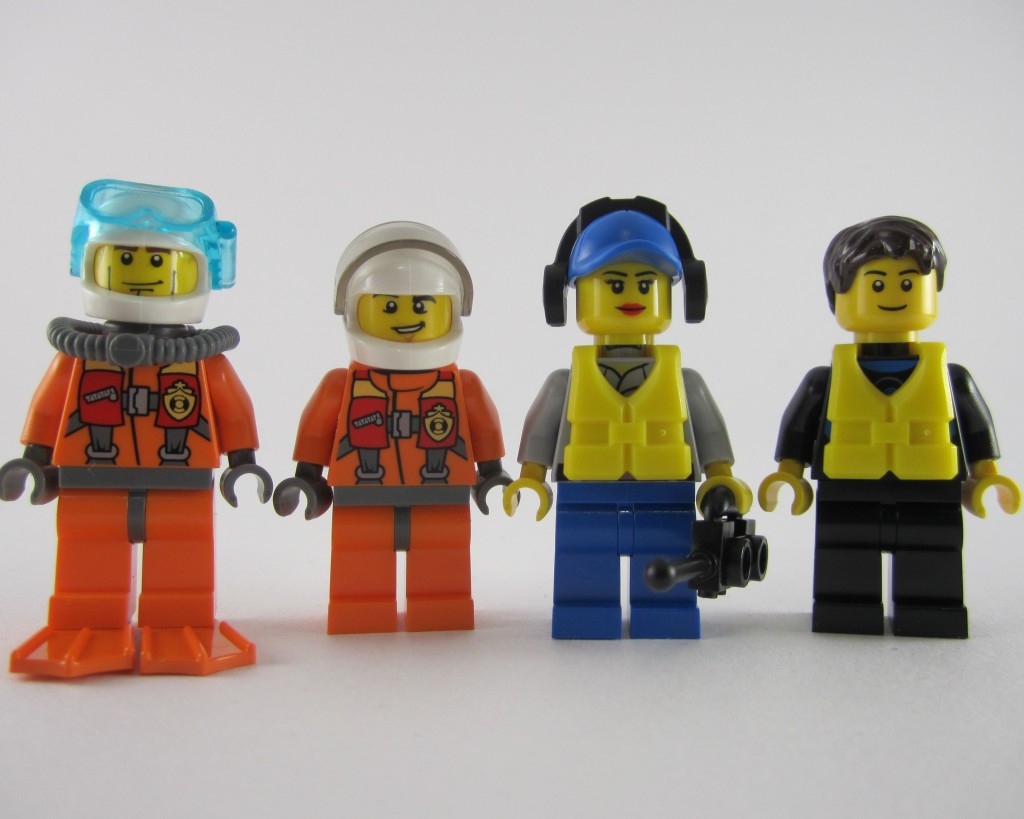 Ah, how nice is it to review a set with generic minifigs instead of characters from a movie. I get to give them fictional names. From left to right, we have Dan the Diver, Heath the Helicopter Pilot, Cassie the Crew Member and William, the guy in the wetsuit. Dan and Heath are wearing the exact same bright orange clothes, which is weird because you’d expect Dan to be attired appropriately for diving. William has a wetsuit as he owns the sailboat which comes under attack by a great white shark. 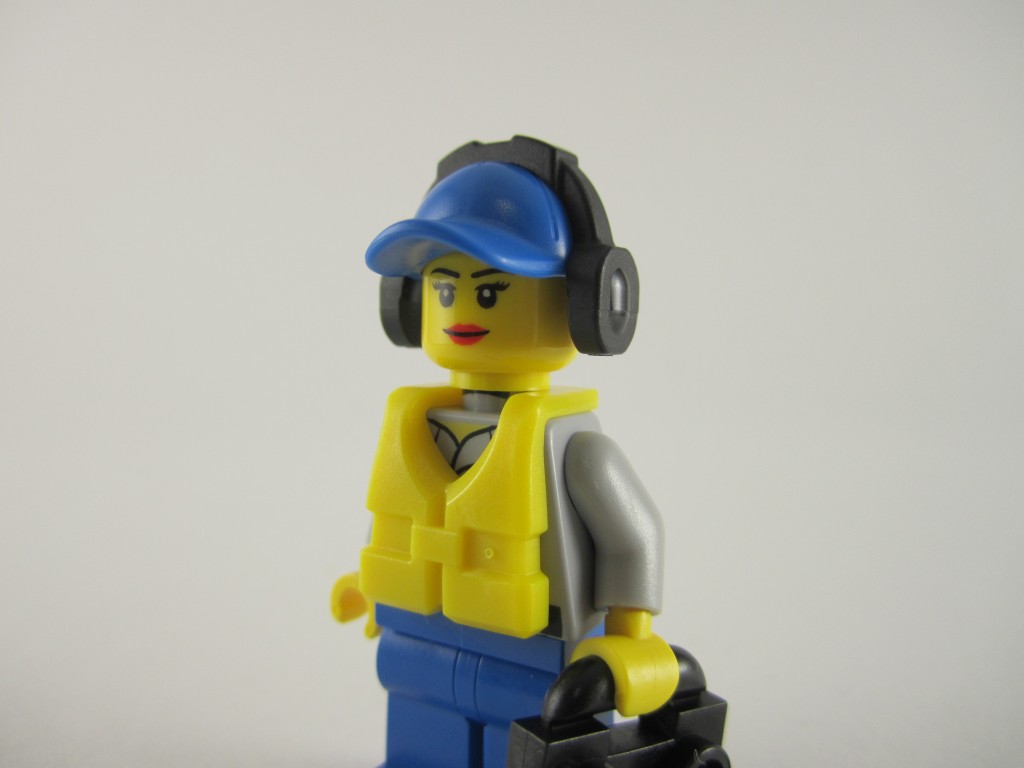 Cassie the crew member has the brand new headset attachment which is fastened on her cap via a small point, similar to Lego Friend’s accessories. She also has one of the newer lifejackets that made their debut last year. 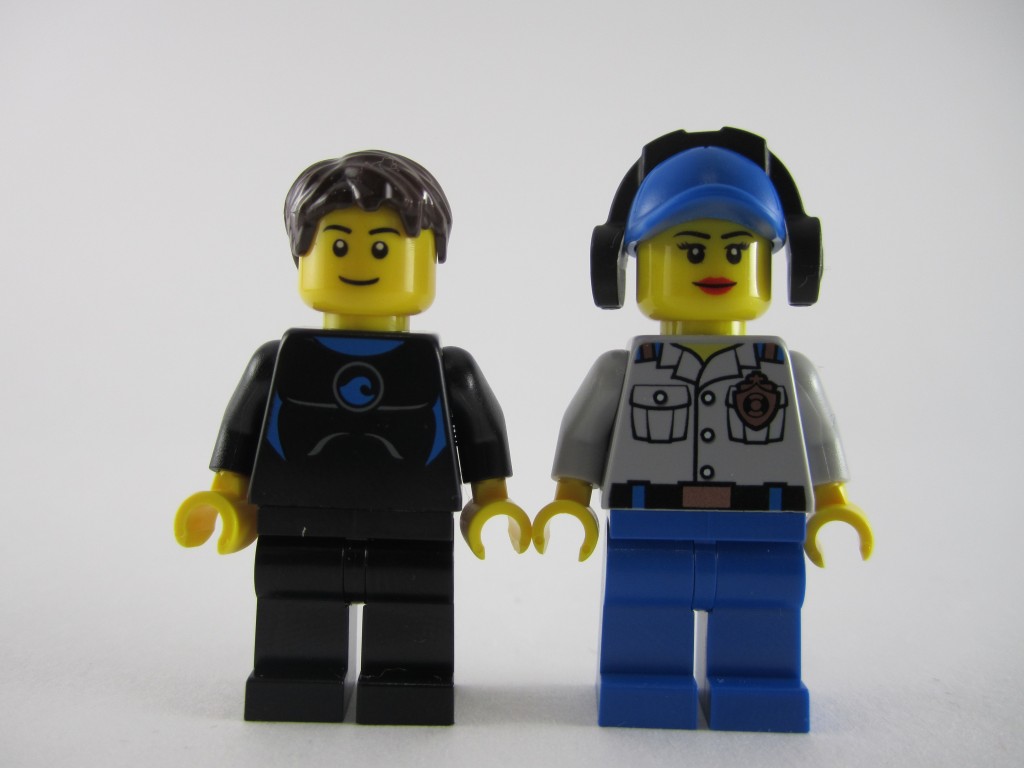 Here’s their torso prints sans life jacket. I like that Cassie has a Coast Guard shield on her pocket. 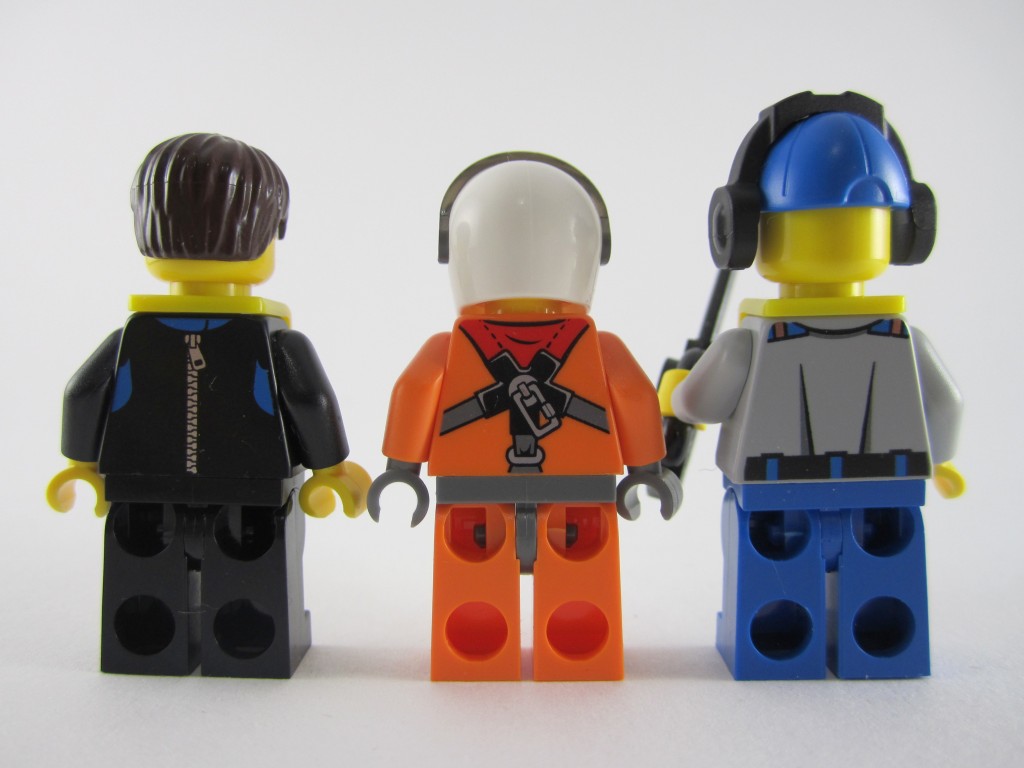 Back printing for all the minifigs, which is to be expected with Lego minifigs from sets. All good in this area! 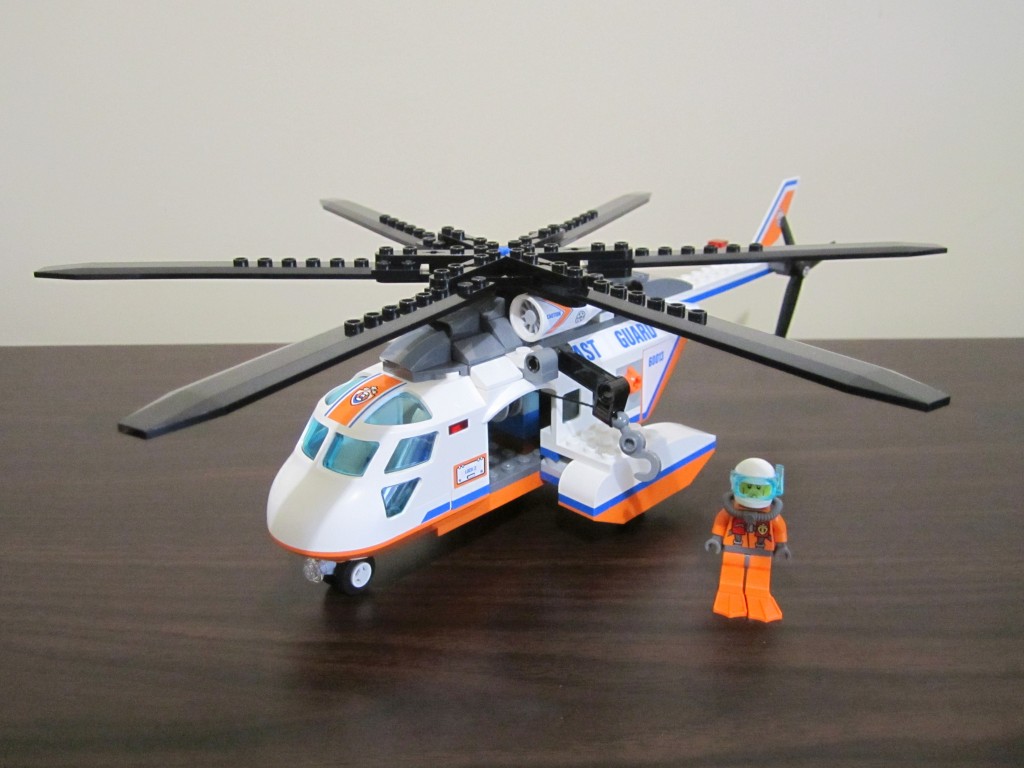 EDIT: Thanks to reader ICA for pointing out that there were 2 other 6 blade rotor helicopters before this one!

And voila, here is the completed helicopter! It’s quite a beauty, with the orange and white bricks looking very good with blue accents. It’s quite a large helicopter and the illustration on the box doesn’t really do the size justice as I was expecting a much smaller build.

The main draw for this helicopter is it’s majestic 6 blade rotor. I’ve browsed through the archives at Brickset and I’m pretty sure this is the first time that Lego has ever produced a 6 blade City-themed helicopter in history, which makes this quite a momentous set! 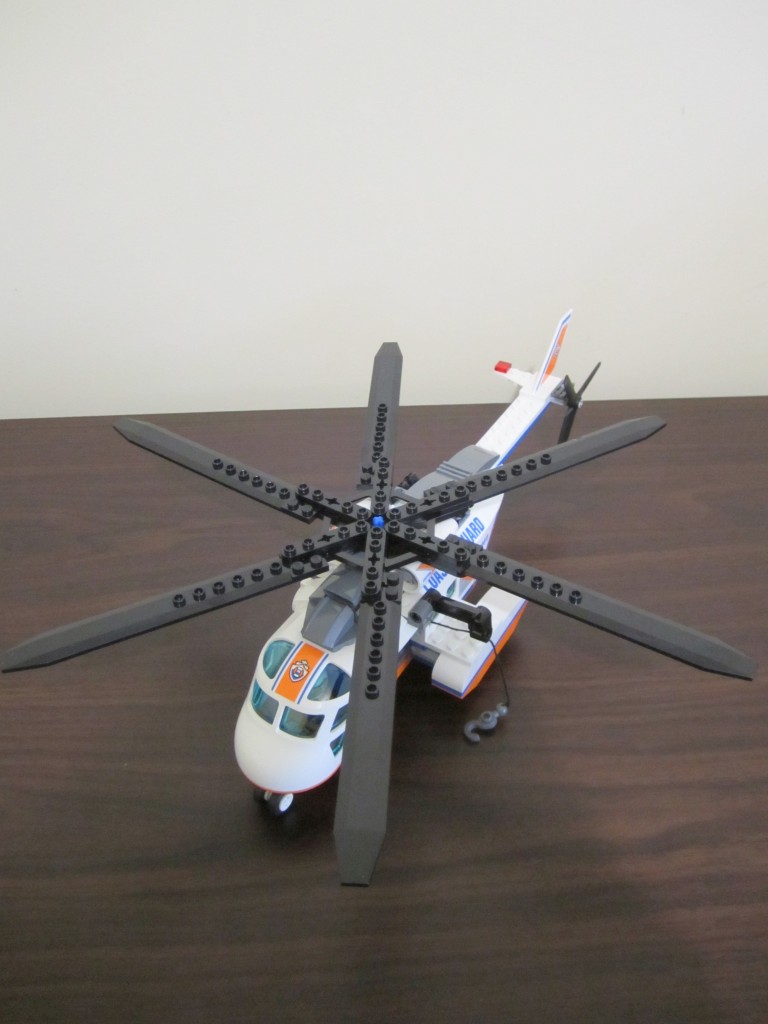 Here’s a better angle showing off the helicopter’s impressive rotors. I think it balances out the large helicopter body very well and like all helicopter rotors, spins round and round effortlessly.

By now you can probably tell that I like using .GIFs to show off different features of sets that I build. 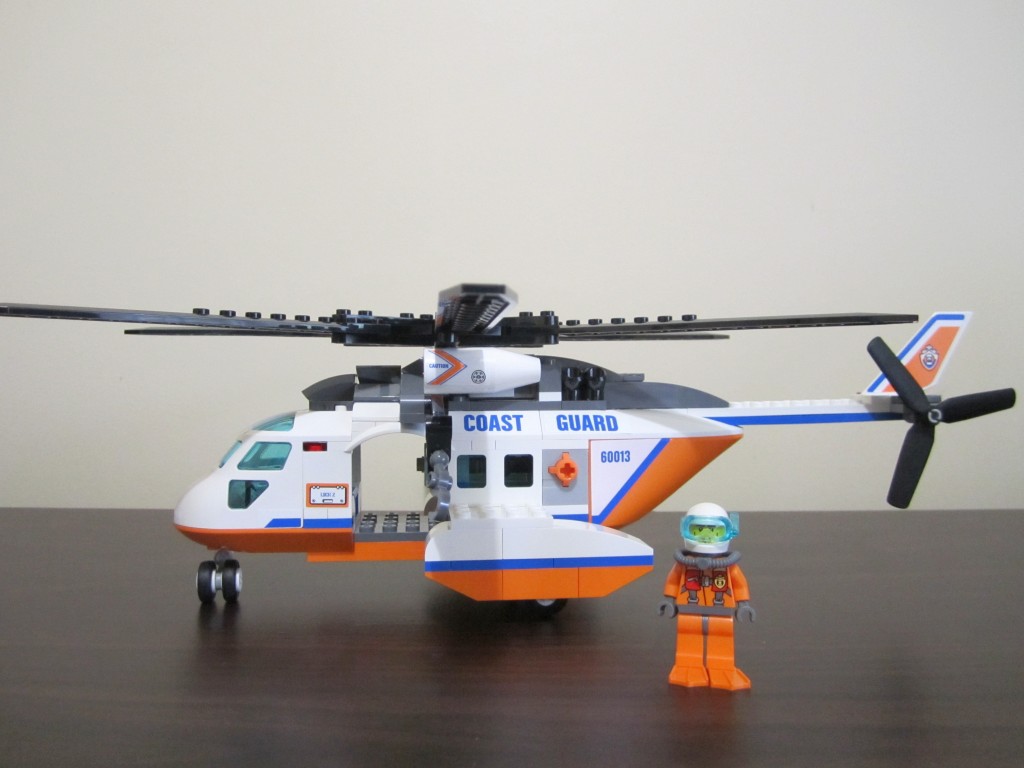 Here’s a look at the helicopter’s side. Unfortunately, a minifig can’t fit inside the helicopter’s door area, which I think is kind of a waste seeing as how the helicopter is quite large. There’s a play feature on the side involving a wind up motor, which is activated by pulling the hook which can then be wound back up by pressing the orange button that you can see underneath the word “guard”. 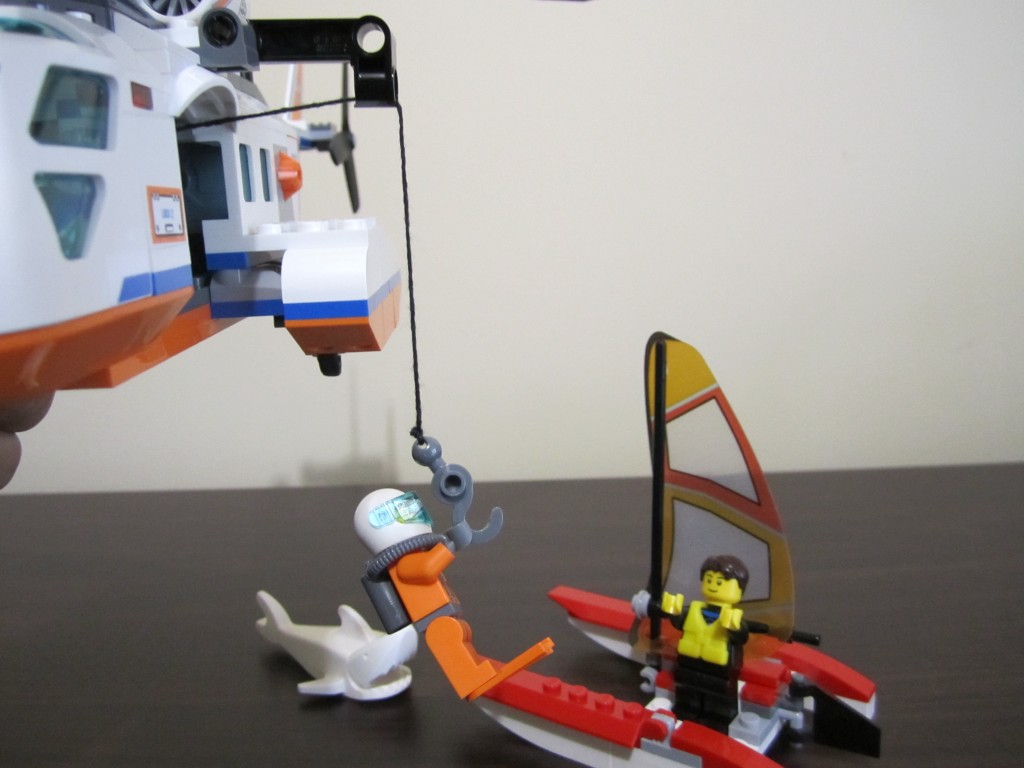 You can see the hook in action here, which you use to lower the diver to rescue the hapless dude on the sail boat. I encountered some difficulty getting a minifig to grip on to the hook due to the hook’s thickness and I was afraid that the minifig’s hands would break!

And here’s a look at how it works. When you jam the button, it retracts the string, pulling the diver up to the helicopter. The mechanic works like those baby rattles where you pull down on a handle which slowly retract upwards. I’m not normally a fan of play features but I like this one, as its a great fit with the entire theme and it’s something you just expect out of a rescue helicopter. 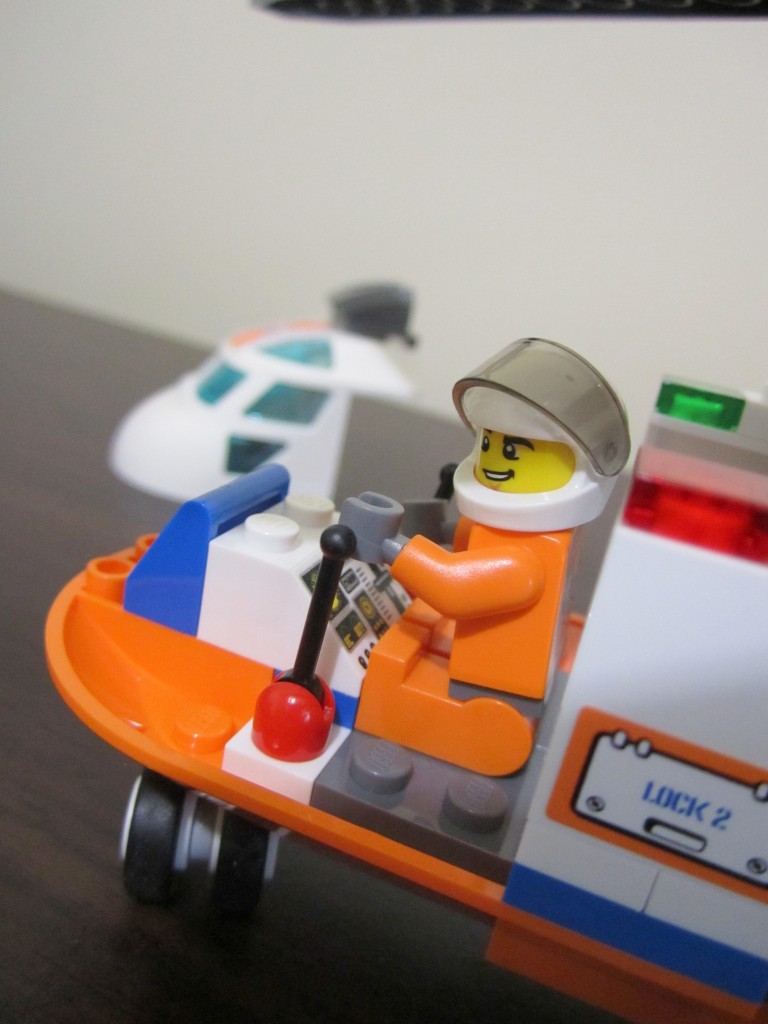 Lastly, the pilot. The cockpit snaps right off to reveal the pilot in a fairly average cockpit. We get a nice old fashioned printed control panel and a couple of antenna to pilot the helicopter. 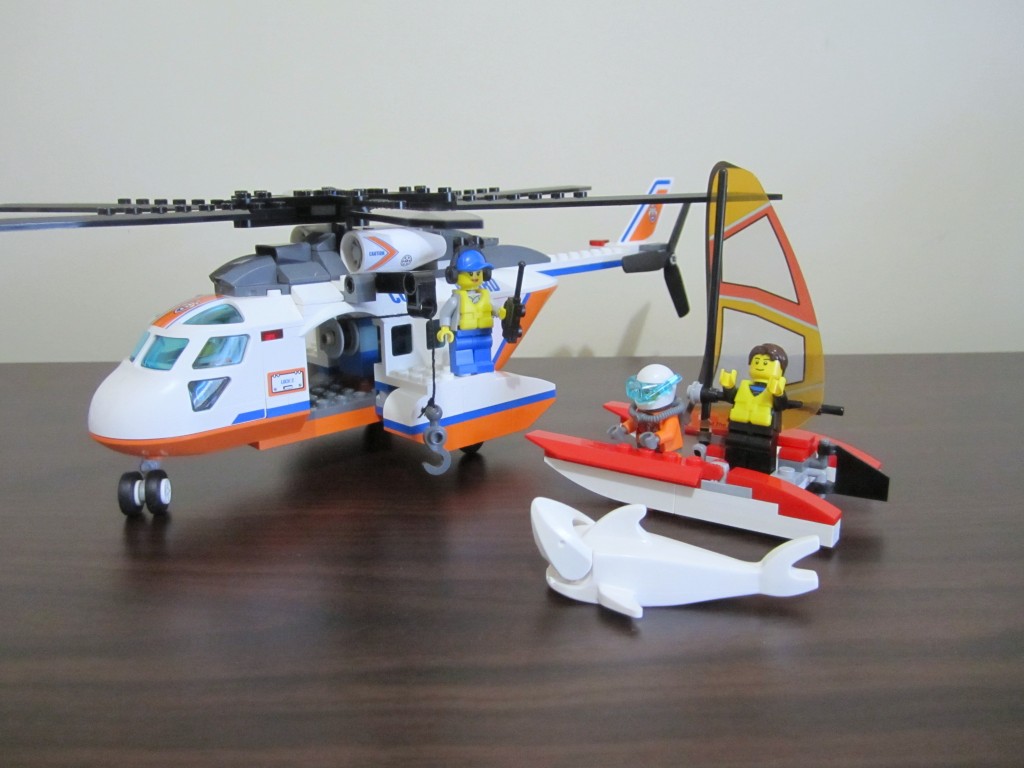 Final Thoughts: This was a nice change of scene from the usual licensed sets that I normally buy/build. It was a pretty enjoyable build and since I don’t build too many city sets, it was a nice change of scene and it was fun building with a lot of new (to me) parts. The colours, as it with all city sets are bright and vibrant and you get quite a good selection of neat parts and accessories with the diver plus you get a white shark which is pretty rare! As the very first City six blade rotor helicopter, it represents quite a milestone in the evolution of Lego City helicopters. Another plus point is that it’s only AU$39.99, which unbelievably is the same price as the US. This doesn’t happen very often so it’s a great pickup if you’re Australian and looking for a nice medium-sized set.

Should You Buy It?: It’s a great buy for the sub $50 category, comes with 4 minifigs and a shark as well as a decent quantity of orange bricks. The size of the helicopter, accentuated by the six blade rotor makes it look really good as a display set, which is not something you usually get for this price. If you’re a fan of City Lego, this is a must-buy as it’s by far the most impressive looking helicopter. The price seals the deal and it’s nice not inflicted by the “Aussie tax” for once. 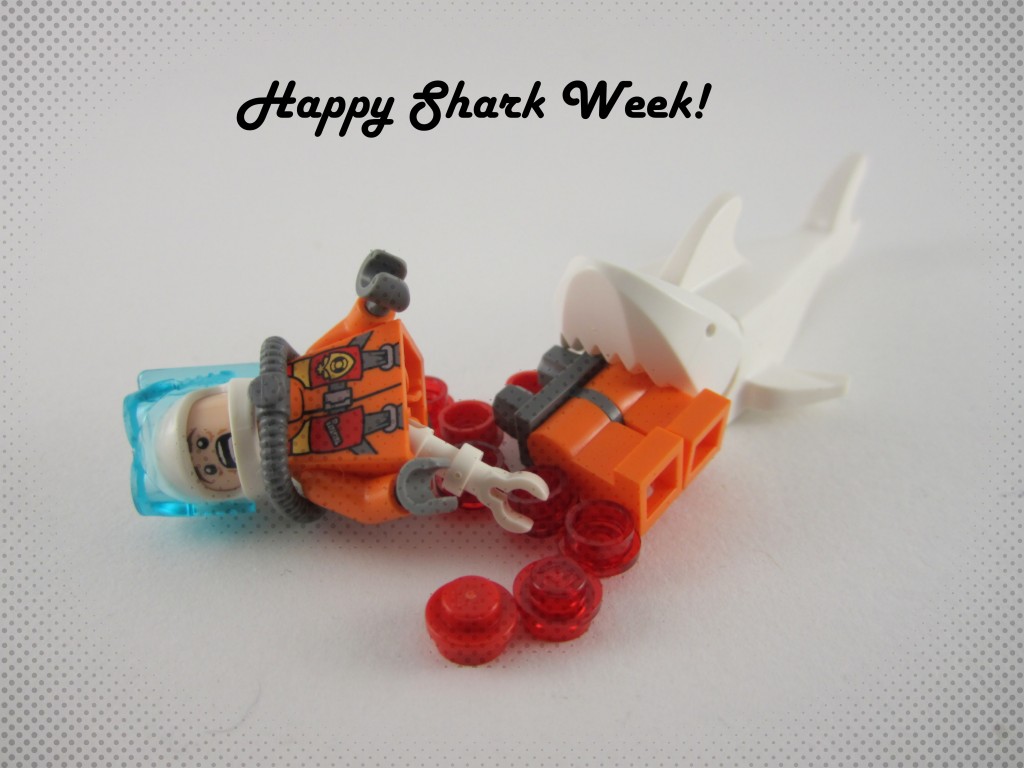 Oh and this week happens to be Shark Week! This is what happens when the diver gets eaten by the great white. Be careful in the oceans!

I'm giving away a copy of 10308 Holiday Main Street on my Instagram page!Click the link to find out how you can win one!LEGO gifted me a spare, but I already received one for review, so this one is being given away in the spirit of Christmas! Also, keep an eye out for more giveaways as we count down to Christmas! www.instagram.com/p/Cl5mbB4Pii4/ ... See MoreSee Less

It's Christmas, and LEGO were kind enough to gift me an extra copy of 10308 Holiday Main Street! I already have one, so I've decided to give this copy away in the spirit of Christmas! 🎅 Check out the rules to enter below, and good luck! To enter: - Follow @jayong28 on Instagram - comment your favourite LEGO set of 2022 and tag two (2) friends in the comments - Entries close when this post is 24 hours old (9/12/22 730pm AEDT) - One entry per person - One winner will be selected randomly - Giveaway open worldwide* - Judge's decision final * if you're in Australia I'll ship my copy to you. If you're elsewhere, I'll attempt to order one online to send to the winner, OR if the set is unavailable, I'll be happy to swap it for another set (or sets) of equivalent menu. #giveaway #lego #legowintervillage #legochristmas