Disclaimer: I received a Play N’ Wrap Hobby Mat to facilitate this review. I am giving away my review copy.

So about a month ago, I received an email out of the blue from Play N’ Wrap asking me if I’d like to review one of their ‘hobby mats’. Up until then, I’ve never heard about hobby or play mats but my attention was piqued mostly because it was from a local Melbourne business and the pitch was pretty good. I get unsolicited emails asking me to check out the randomest things, some not even remotely related to LEGO so it was nice that this one was LEGO-related.

I took the Play N’ Wrap for a spin to see how it holds up with real life LEGO play. I’ll also be giving away the Play N’Wrap that I reviewed to one lucky reader – read on to find out how you can win one! 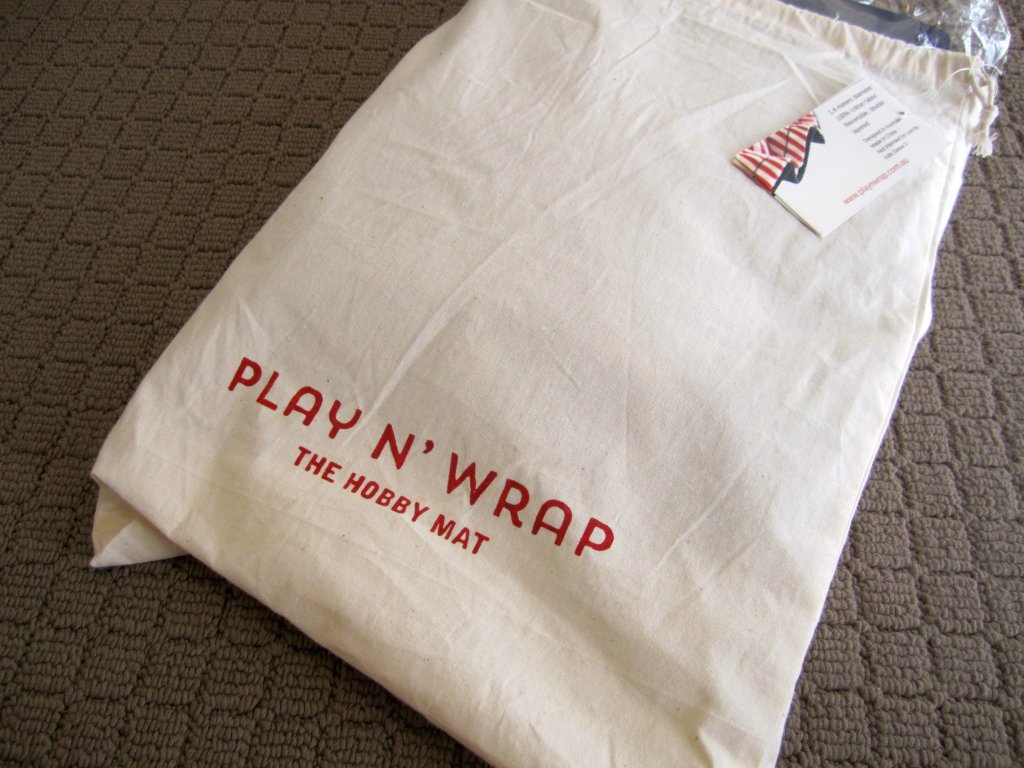 Here’s what I got in the mailbox – the Play N’Wrap arrived in a pretty neat linen drawstring bag. 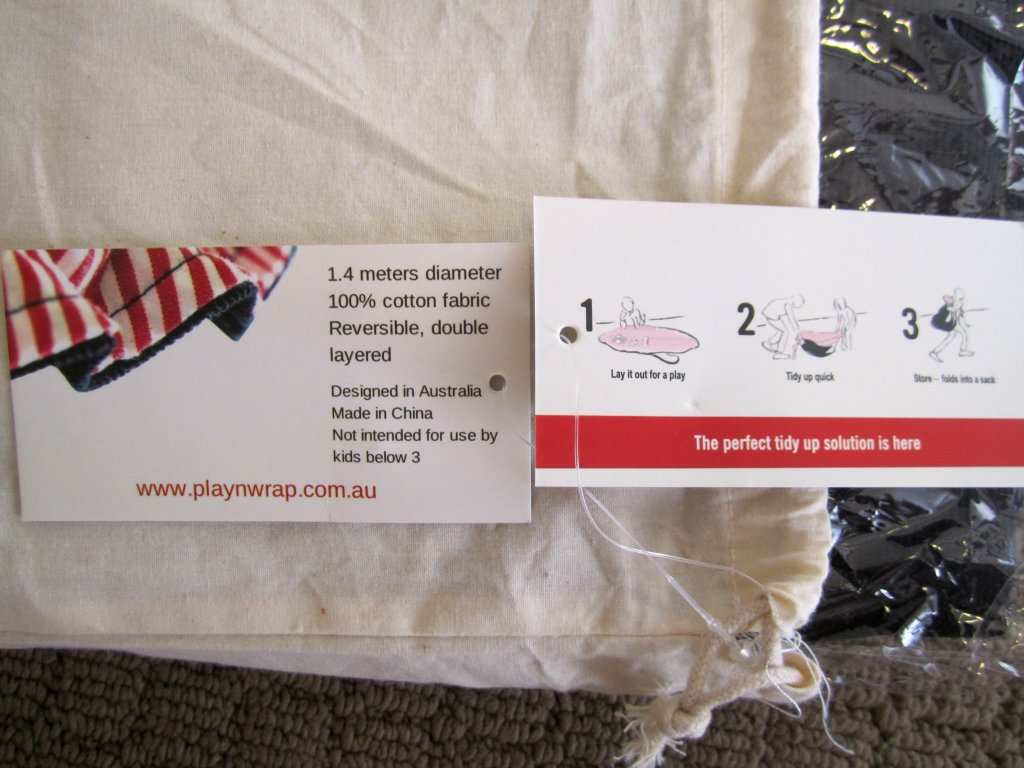 Attached to the bag are two reversible cards which contain information about the Play N’Wrap Hobby Mat. The instructional diagrams were particularly useful to me, since this hobby mat concept was relatively new to me 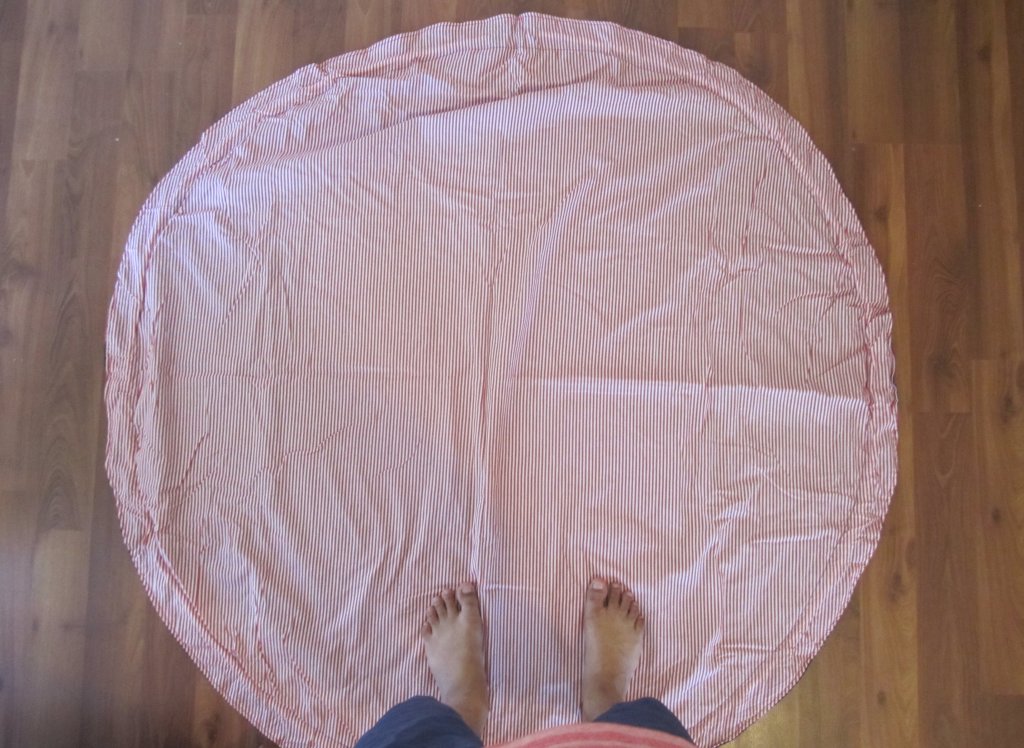 So, the hobby mat is exactly what its name suggests it is – a mat for kids to play on, especially if those hobbies contains hundreds of tiny pieces, like LEGO. The Play N’ Wrap is dual sided – the side where you sit and play on has a cool design – red and white stripes. 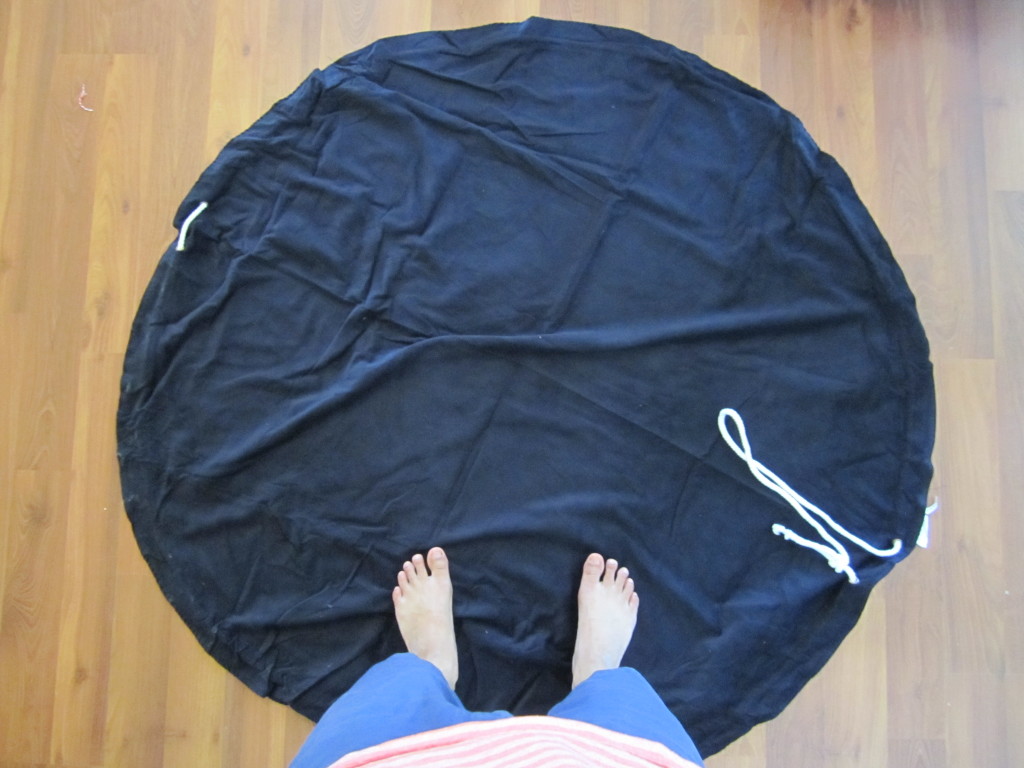 Flip the Play N’ Wrap over and the other side is blue, made out of more rugged material – I think it’s corduroy or some other kind of heavier fabric. I’m guessing this will be useful if you want to take the hobby mat outdoors to play in your garden or backyard. 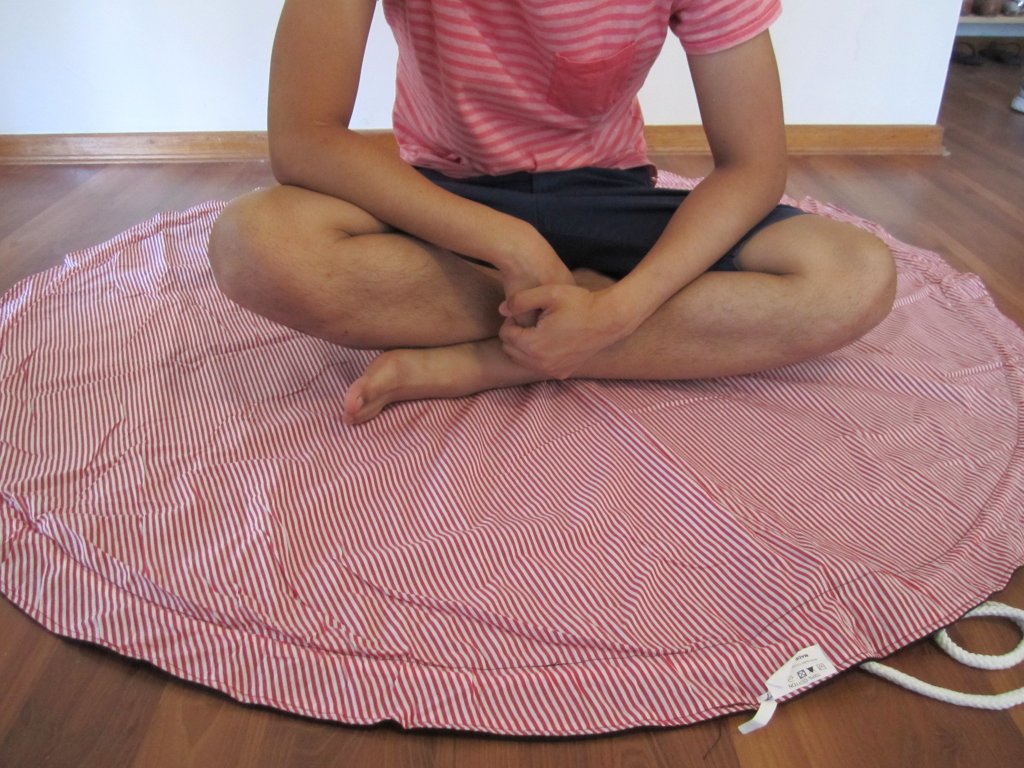 The Play N’ Wrap is pretty huge – I’m an adult male and there was still tons of space for me in the hobby mat. Imagine if a younger kid were to use it – he would have so much space for himself and maybe for a friend as well. The striped side’s fabric is also pretty soft and quite comfortable to sit on. In case you were wondering, no, I did not wear a pink striped shirt to match the mat! I only noticed when my wife pointed it out! 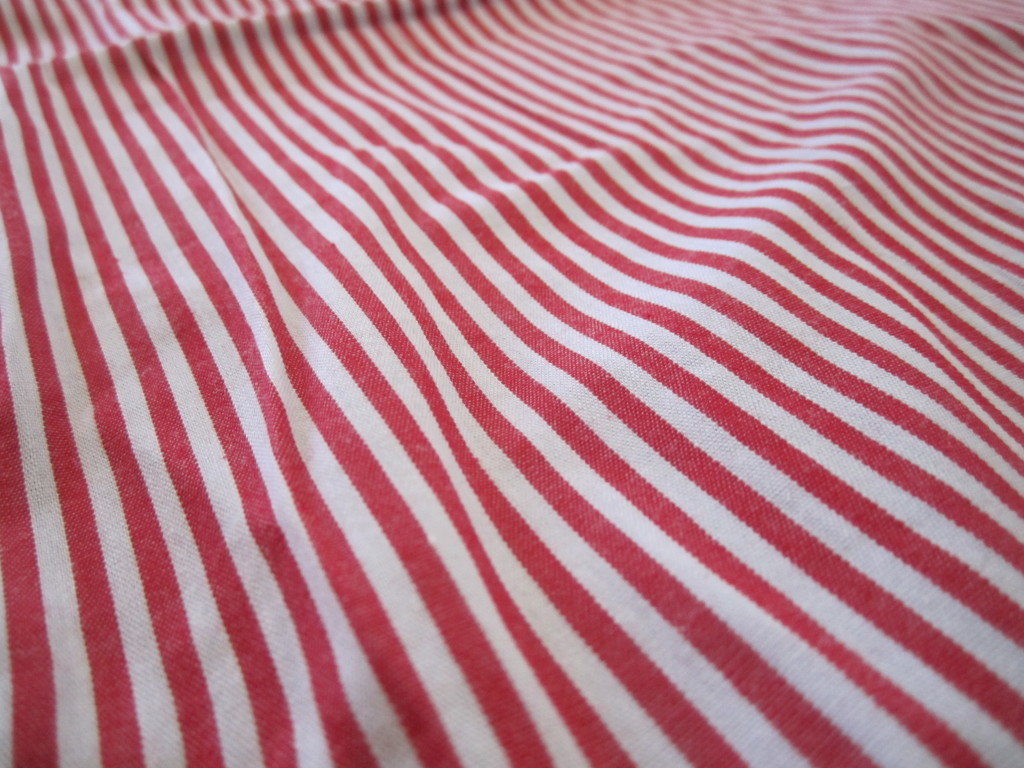 Here’s a closer look at the fabric. I was very impressed by the overall quality of the fabric. When I first noticed the tag said it was Made in China, I was kind of afraid that the quality would be lacking. When I actually got to use it, however, my fears were put to rest. 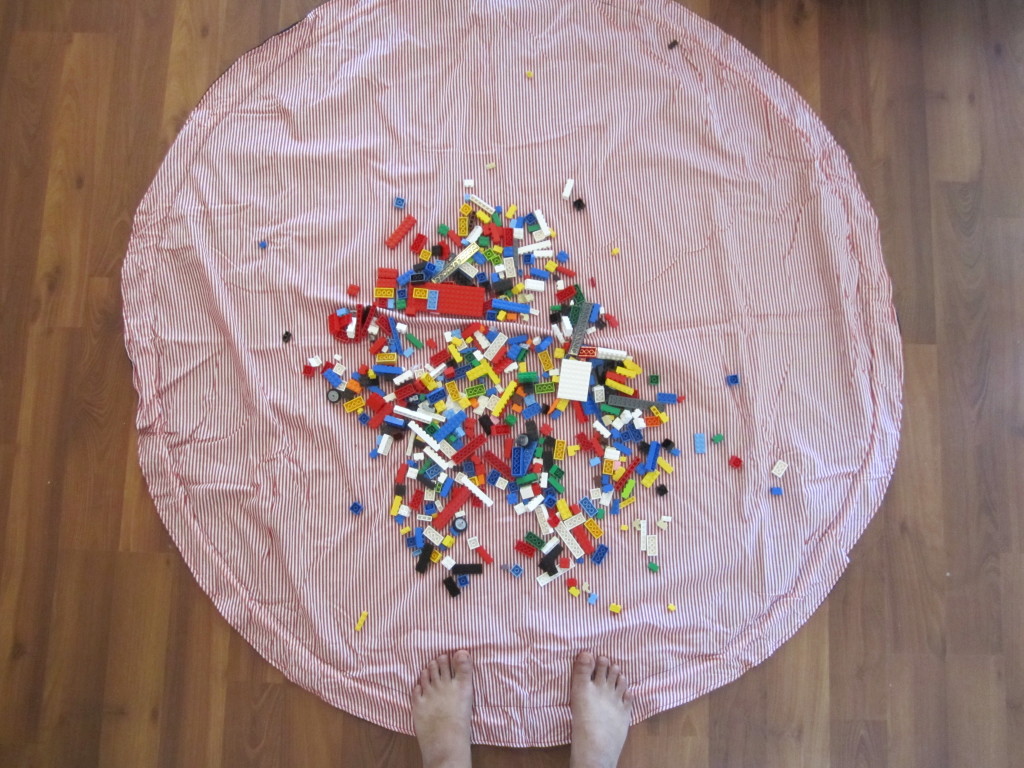 On to a real world test- tossing a bunch of LEGO bricks on it. I had a small bucket of random pieces that I had just washed to play with. As you can see, because the mat is so large, you can easily empty an entire child’s (assuming he has an average sized collection) LEGO collection onto it for play time. 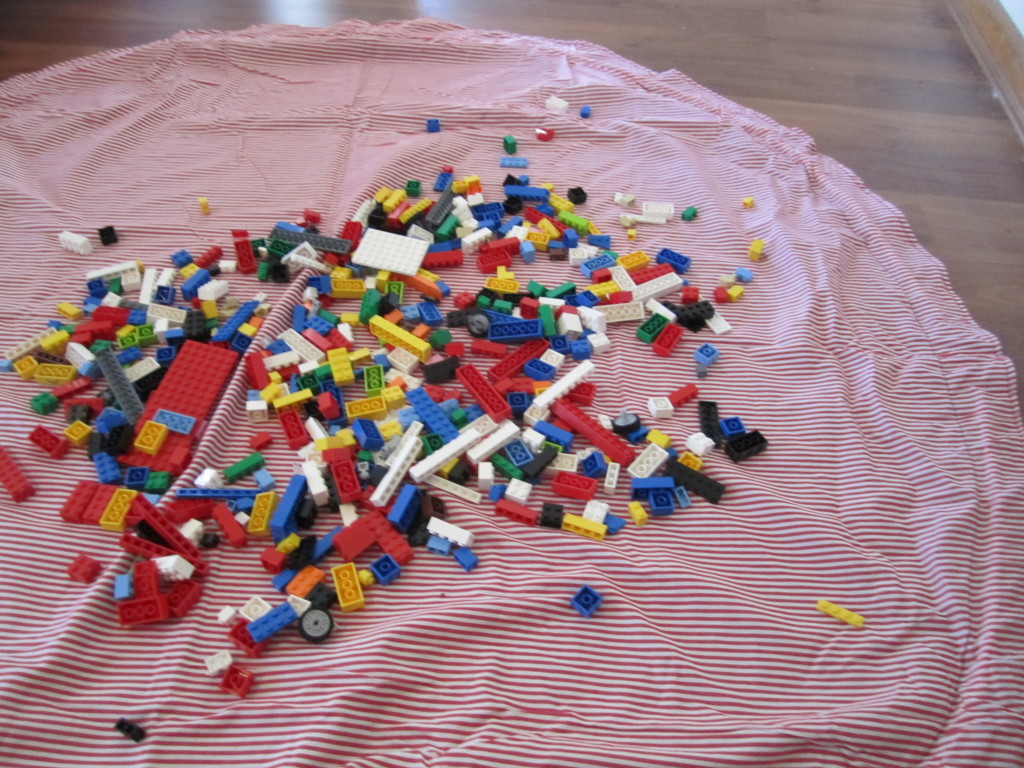 As an Adult LEGO fan, I wouldn’t have much use for a play mat like this but for kids with messy unorganised collections, I could totally see parents finding a lot of use for one of these mats, especially if they want to contain their kids’ play area and prevents LEGO bricks from being strewn about the house. 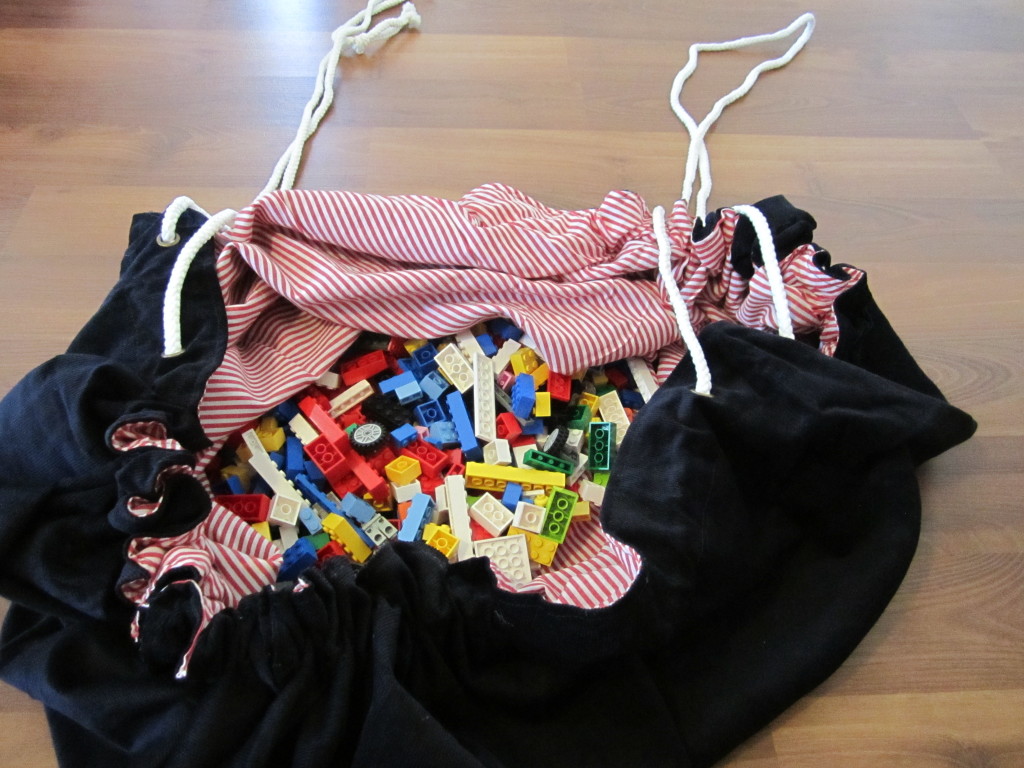 So, the other thing the Play N’ Wrap does is uh… wrap up your play time by transforming into a drawstring bag. It’s a pretty nifty trick – you can just yank the two pieces of string (which are thick and have a good grip) and it will easily scoop up all the contents on the mat for easy storage. The mechanism got a bit of getting used to – it took me awhile to pull the strings properly since the bag/mat is quite large. 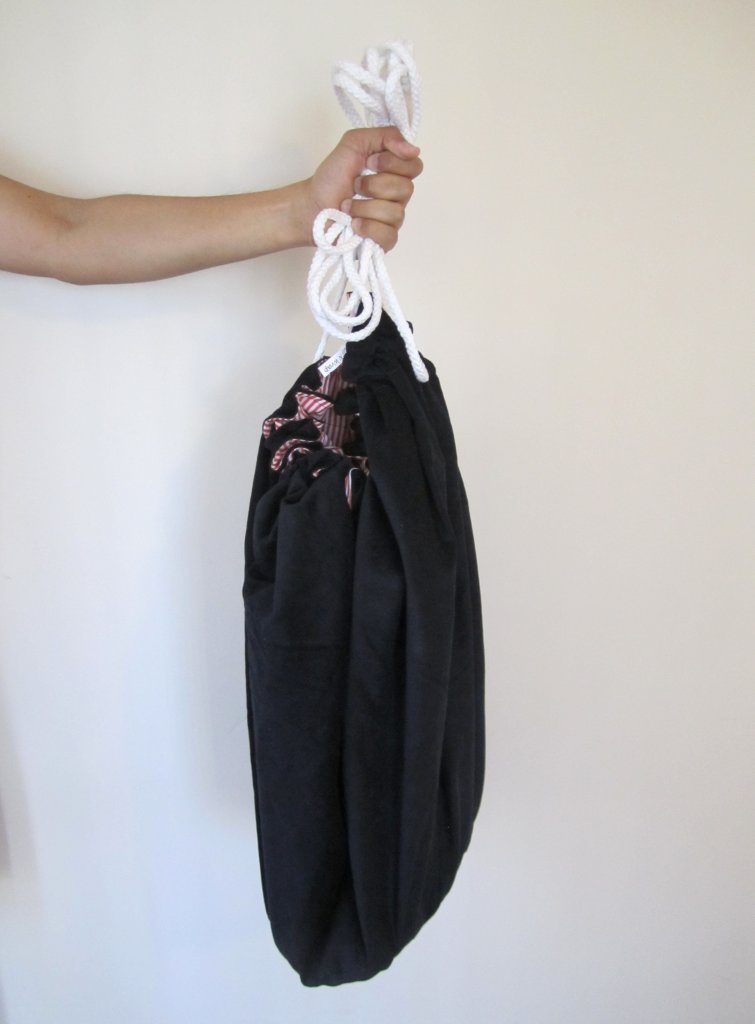 And here’s how the Play N’ Wrap looks like when it’s all bunched up. Like I said earlier, it’s a pretty handy way to clean up after play time, especially if you have many different components such as LEGO bricks lying around. It’s fairly simple to operate as well, so you can also use it to teach your younger kids to tidy up after themselves.

Final Thoughts: I quite like the idea of the Pay N’ Wrap. As an adult LEGO enthusiast, this isn’t really targeted at my demographic but if you’re a parent with kids that love their LEGO, you’ll probably get a lot more use of the Play N’ Wrap. I did some research and discovered that this product isn’t really that novel – there are many other versions available online or in toy stores so it isn’t something revolutionary.

In spite of that, I was still very impressed by the overall quality of the Play N’ Wrap as well as the great materials and components used.

Unlike most other LEGO play accessories on sale, this is pretty good as it’s pretty useful and will be something that you’ll get a lot of mileage out of, if you have kids that like playing with LEGO on the floor.

It’s a pretty cool gift for young LEGO fans, especially with Christmas coming around. Instead of wracking your brains and worrying that you might get a LEGO set that he/she already owns, why not get something like the Play N’ Wrap?

Congratulations to Gabby W! You’ve been selected as the winner of the Play N’ Wrap hobby mat!

Because I don’t really have a use for my Play N’ Wrap, I’ve decided to give my review unit away to one lucky person! It’ll come in handy if you have kids at home who have LEGO bricks all over the floor during play time.

I’ve only used it lightly, mostly to photograph it in my living room so it’s as good as new.

To win one (1) Play N’ Wrap worth $45, all you need to do is tell me how you organise your LEGO at home via the Rafflecopter widget below – it’s as easy as that! LEGO bricks pictured above not included 🙂

The giveaway is open to all Australian residents. I’ll post the prize to the winner, which will be selected randomly on Sunday, 7 December 2014 at 12:01 am. You must have an Australian address for me to send the hobby mat to. The winner will be drawn randomly using Rafflecopter and be notified through email so that I can arrange delivery.

It’s as easy as that!

Thanks to Play N’ Wrap for providing me with the product for this giveaway.