2019 will go down in history as one of the years with the most surprises coming out of LEGO, and the unveiling of 10269 Harley-Davidson was certainly high on my list of things I never expected LEGO to do.

Every year, we’ve come to a Creator Expert vehicle from LEGO, and the Ford Mustang from early in the year did more than satisfy fans, but LEGO were not content and dropped the very first Creator Expert Motorcycle in the second half of 2019.

I remember going, “wow, they actually did a Harley Davidson”, and being very impressed with it, but at the same time remained quite skeptical of it, not being a car and all, which I was used to collecting.

Let’s see if the LEGO Harley Davidson is more than just a pretty little experiment out of Billund.

Thanks to LEGO Group for providing this set for review. 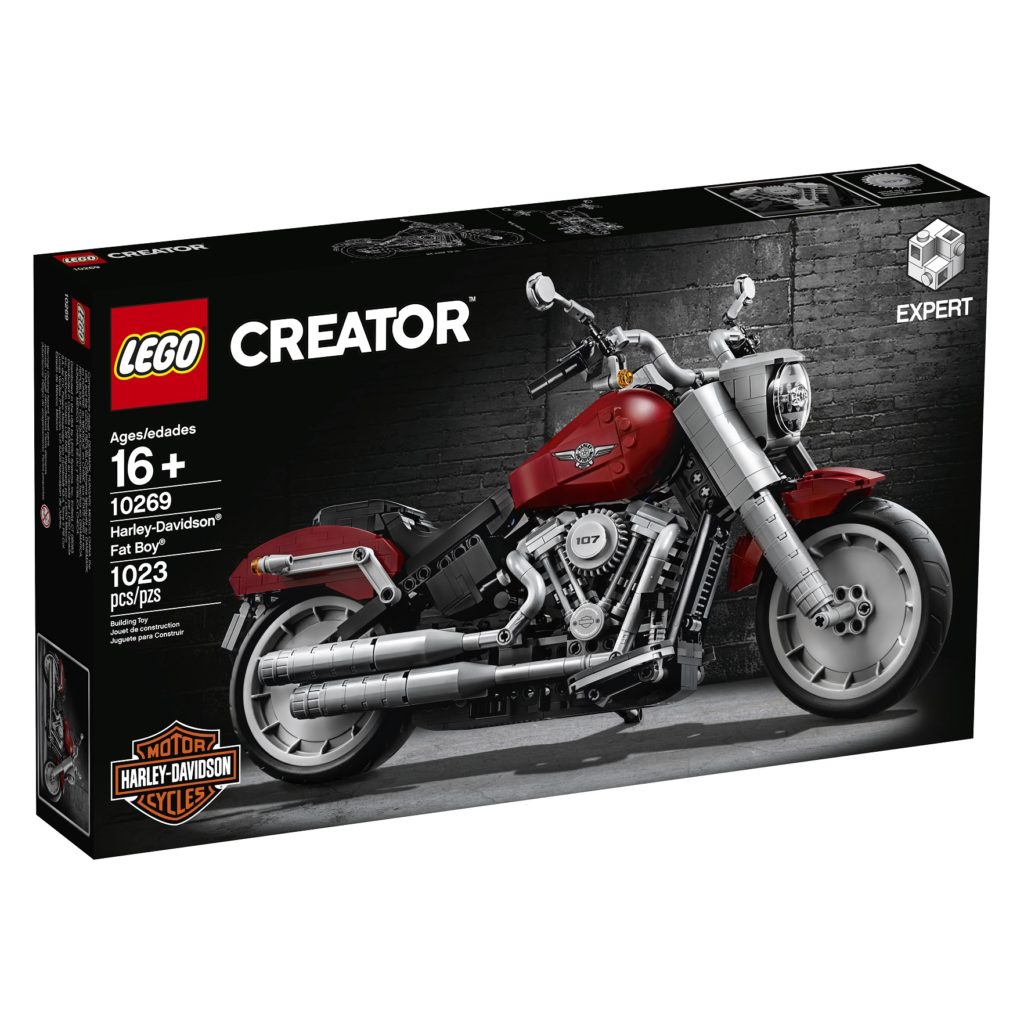 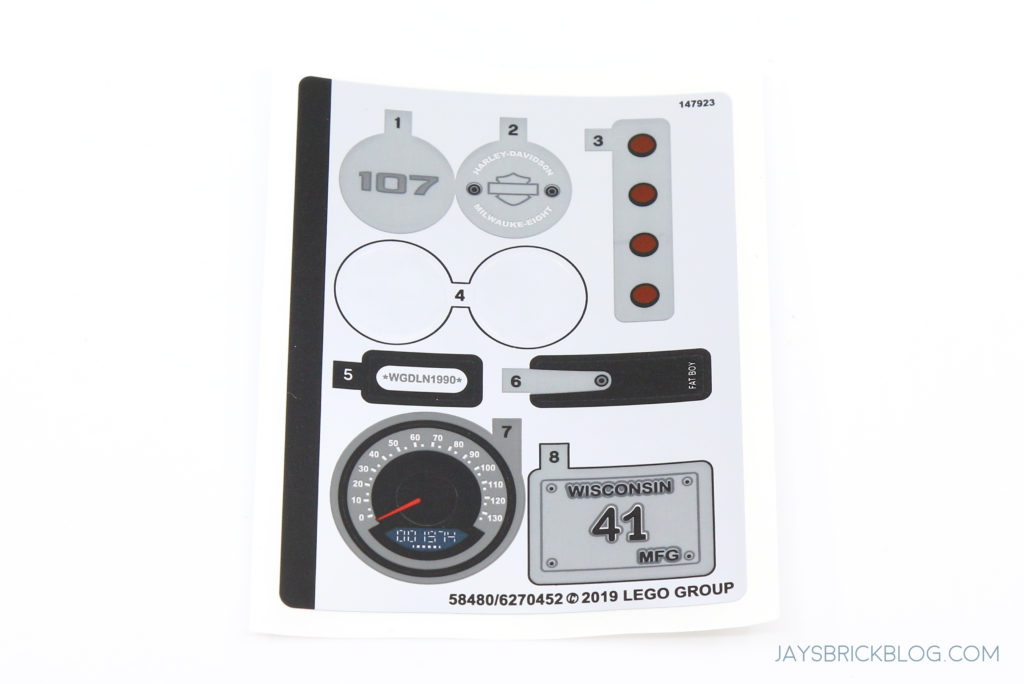 One thing I’d like to add – in my first impressions of the LEGO Harley Davidson, I did get excited by the prospect that this set had no stickers based on the press materials, and the printed Harley logo.

I was wrong though, the set does employ stickers for minor detailing, which is a bit of a disappointment, but these aren’t what I would consider “critical” elements and when they inevitably peel, they wouldn’t detract from the overall experience much. 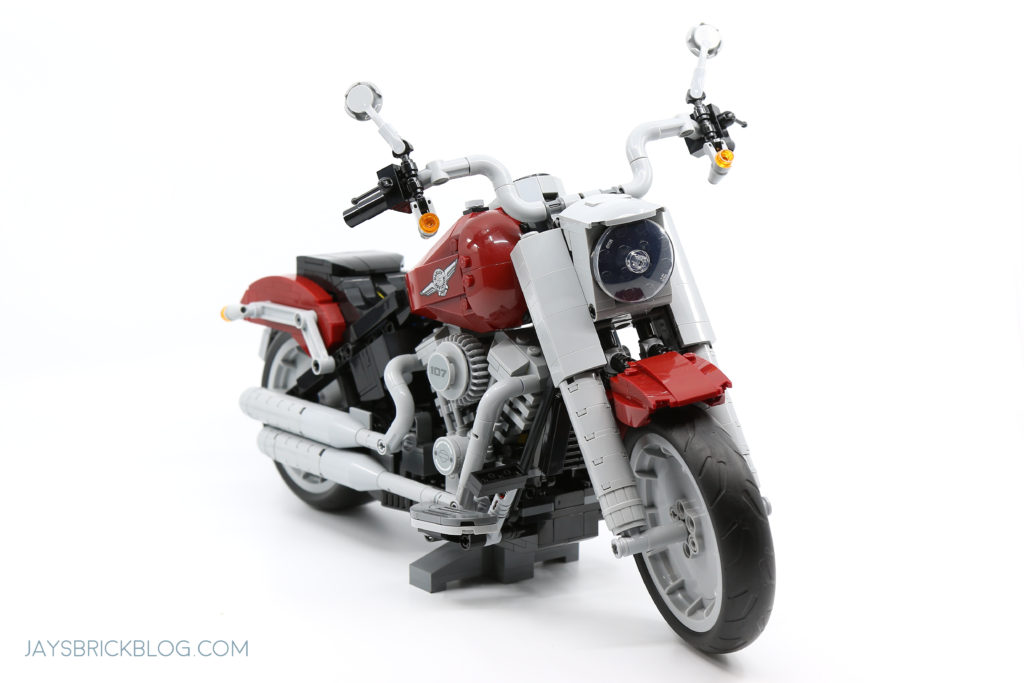 Building the set was a brisk, but extremely enjoyable experience. The set isn’t the largest at 1023 pieces.

Looking at the four numbered bags that popped out the box, I could immediately tell that it wasn’t going to be a substantial set.

After years of building Creator Expert cars, you kind of know what to expect, but what I enjoyed much about the Harley is how unexpected and surprising the build was. 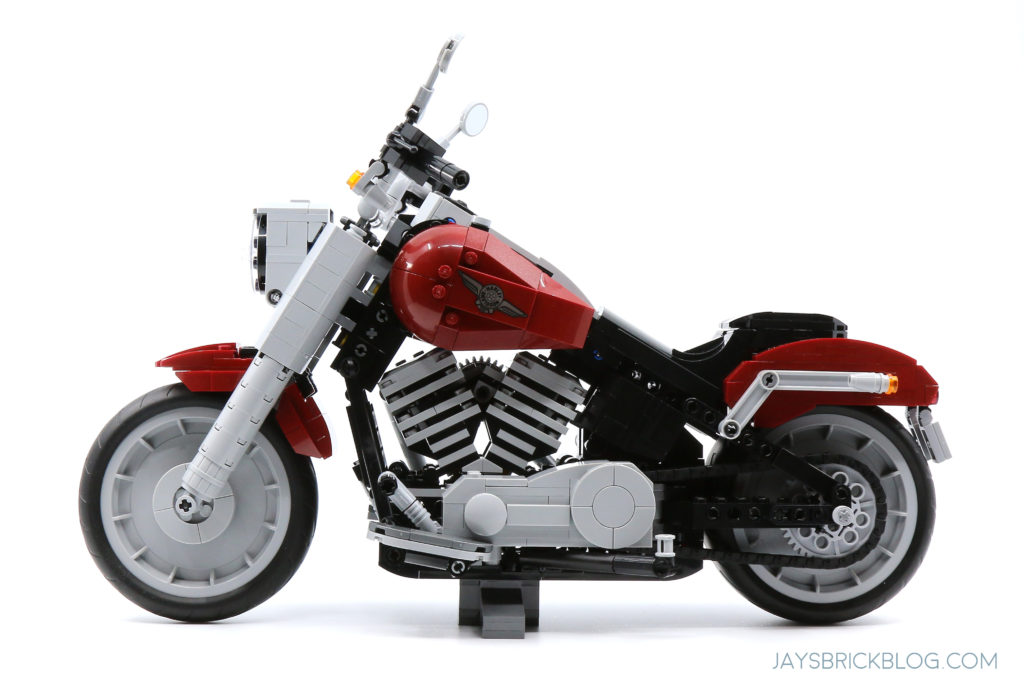 Again, I have to commend Mike Psiaki and his team for actually pulling this set off, and using what is mostly conventional LEGO elements (as opposed to Technic) to mimic the Harley’s shape so well.

I was engaged throughout the build, and it kept me guessing all the way, as to how the Harley would take shape, and it’s the most fun I’ve had building a LEGO set in awhile. 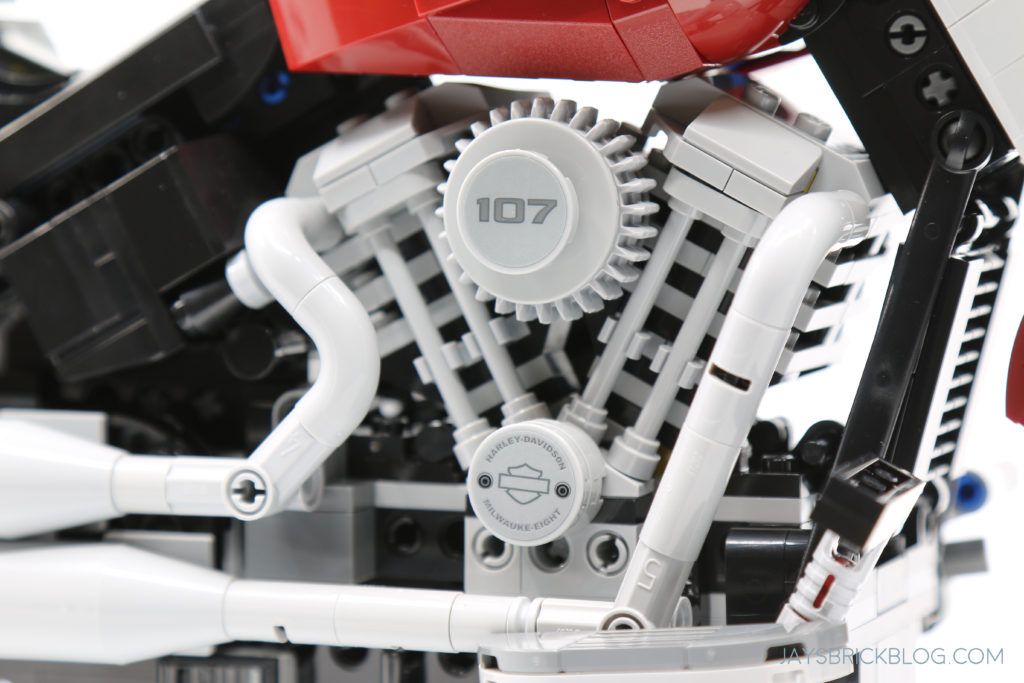 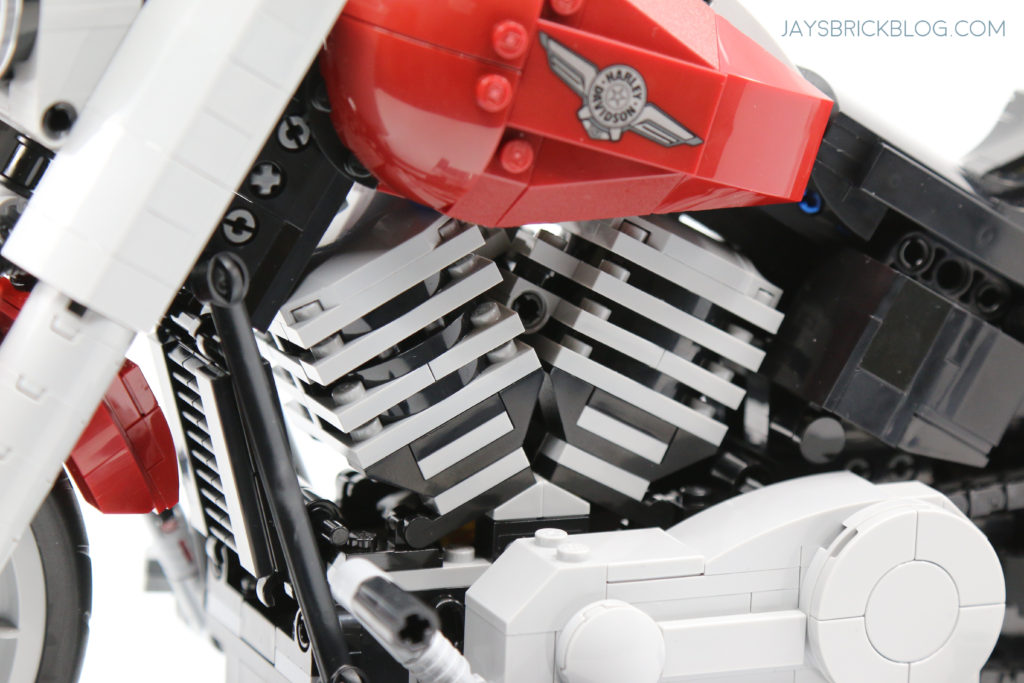 Like most LEGO sets worth their salt – the devil is in the details, and I loved how well the designers captured the Harley’s V-Twin engines, as well as the clever use of a grey gearpiece for the air filter.

I also really like the elegance and restraint shown when it comes to the details – it’s a “less is more” approach, without over-greebling, allowing the core parts to truly shine. 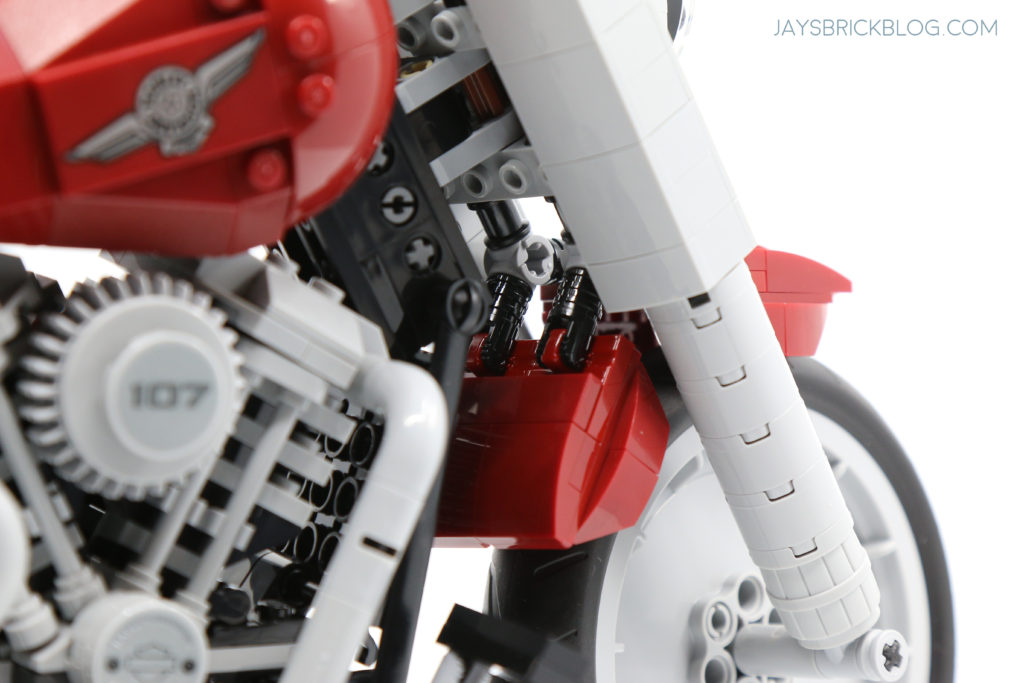 Also, unlike Creator Expert cars, you get to truly appreciate the “innards” of the Harley Davidson as it’s mostly exposed to the world. 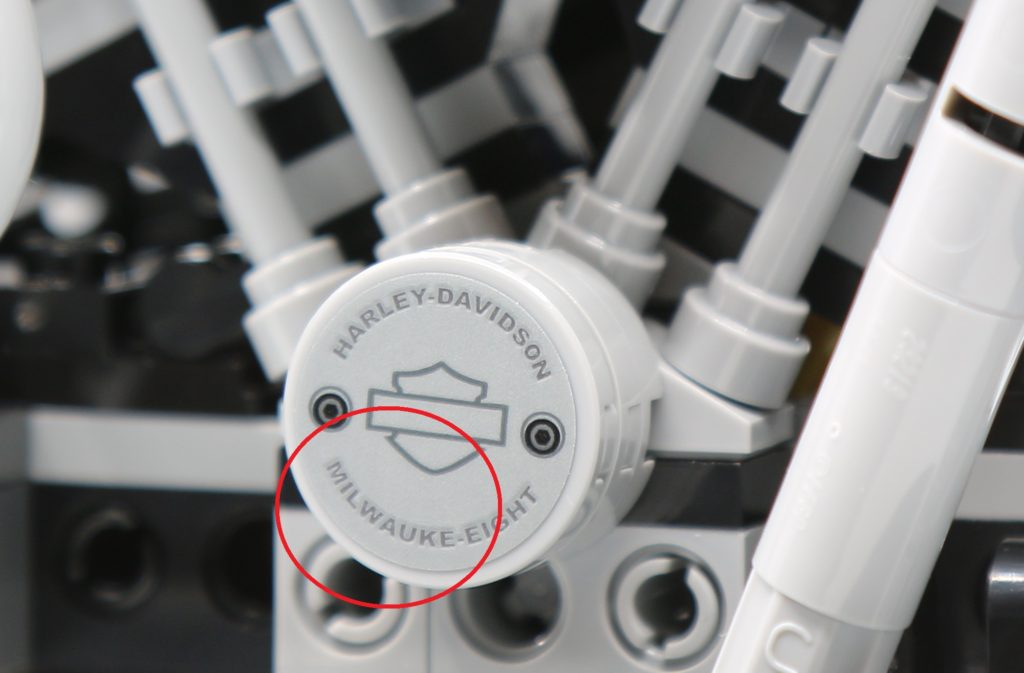 Sadly, there’s quite an unfortunate typo on the sticker which puts a dampener on things. Then again, is it really a necessary life skill to be able to correctly spell Milwaukee? 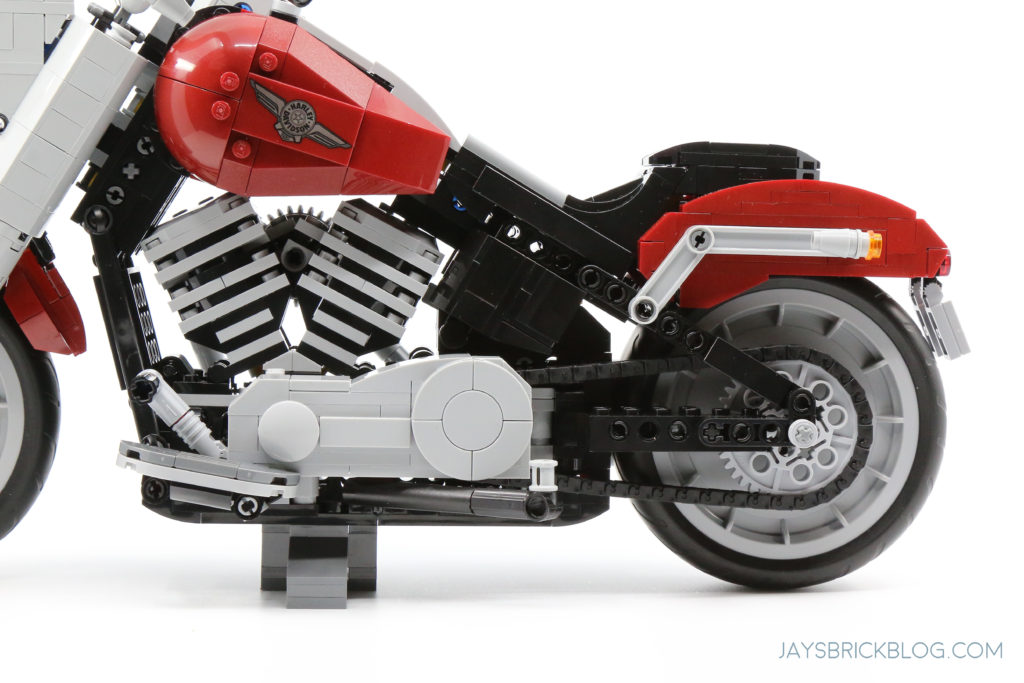 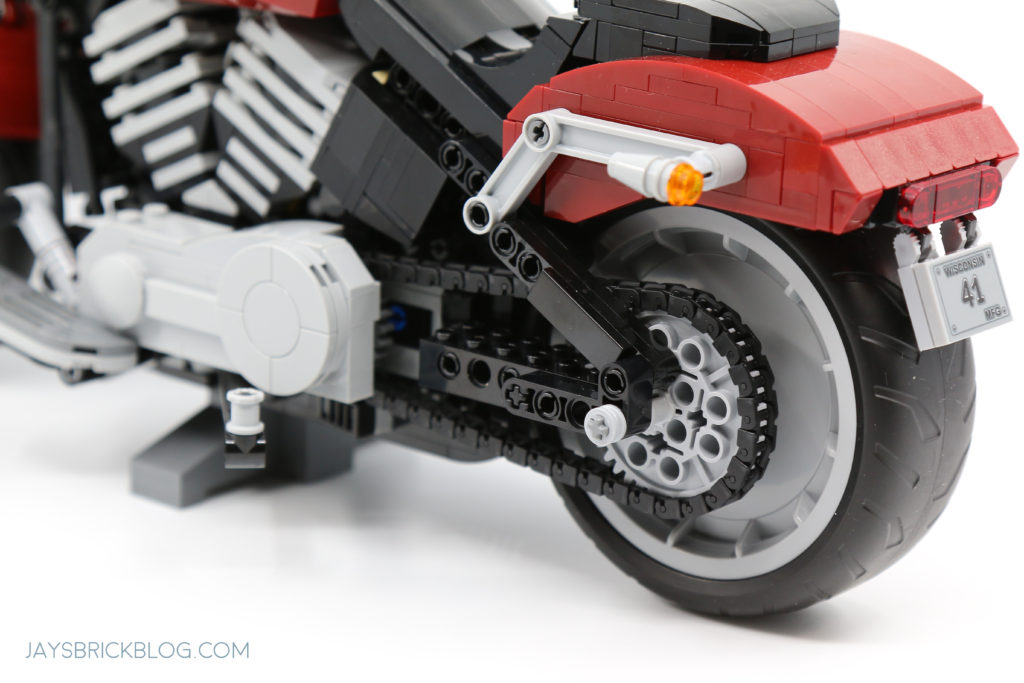 The wheels are custom-designed for the model, and the super-sized aesthetic looks particularly realistic – the threads on the tyres are great to look at.

I’m not particularly knowledgeable about Harleys, but one of the smalls bits of trivia I know is that they use drive belts instead of chains. This model here uses LEGO chains for the engine to function, but I feel like this fact might bother hardcore Harley fans. 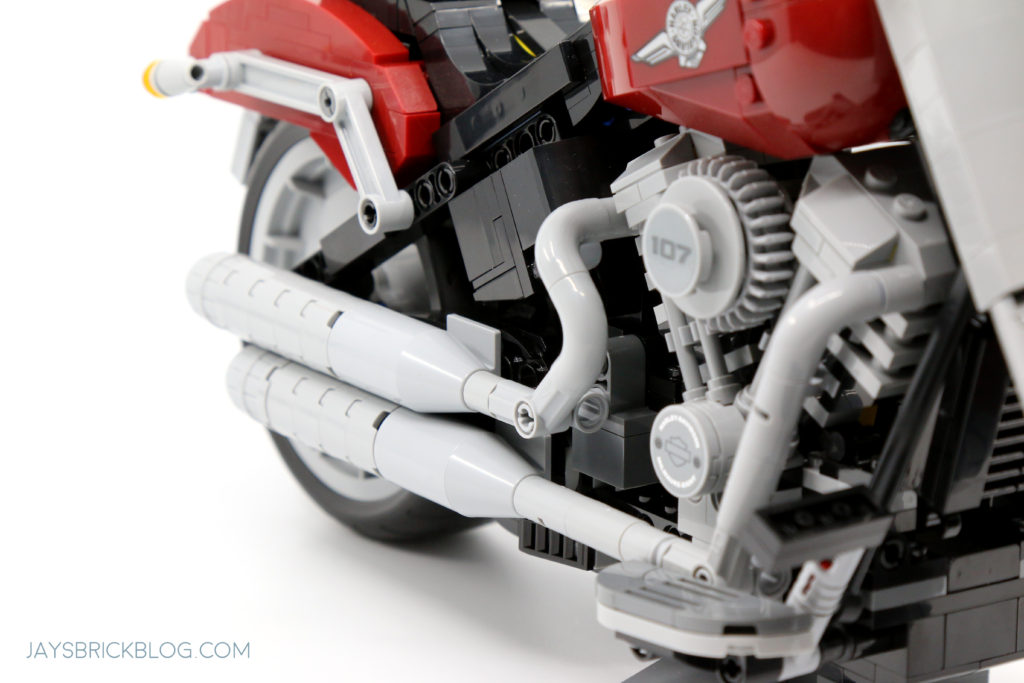 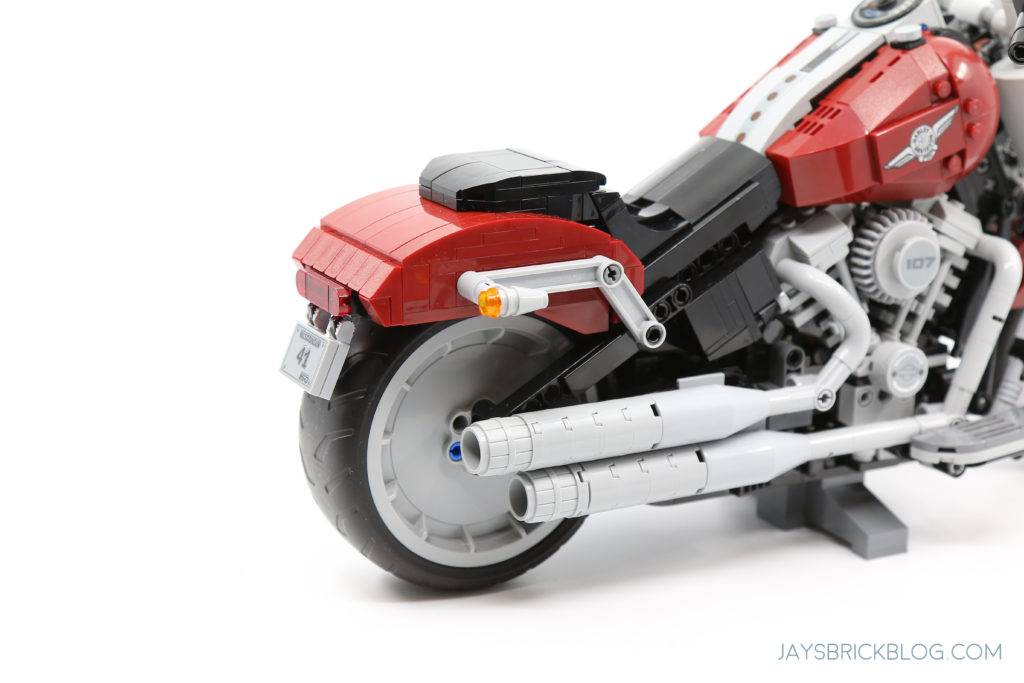 I was also very impressed by the twin exhausts, and the angles in which they connect to the engine looks very well-proportionate and believable to me. 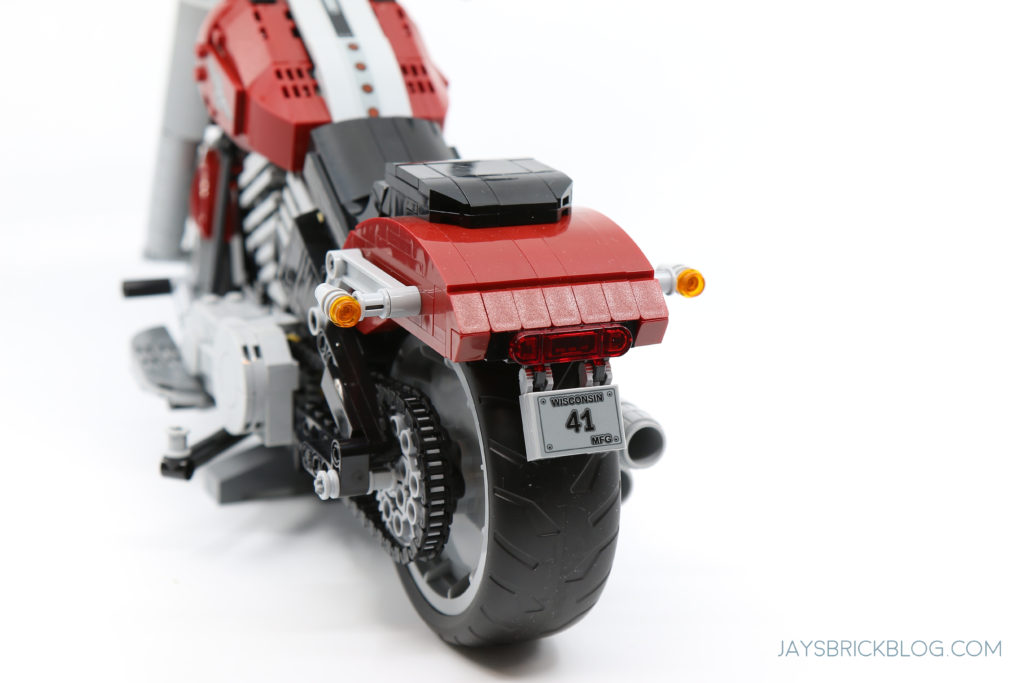 Here’s how it looks from behind, where you can see the mudgard, back lights and the license plate which thankfully spells Wisconsin correctly.

I don’t know what the 41 and MFG stand for, so if anyone can enlighten me in the comments, that’d be great! 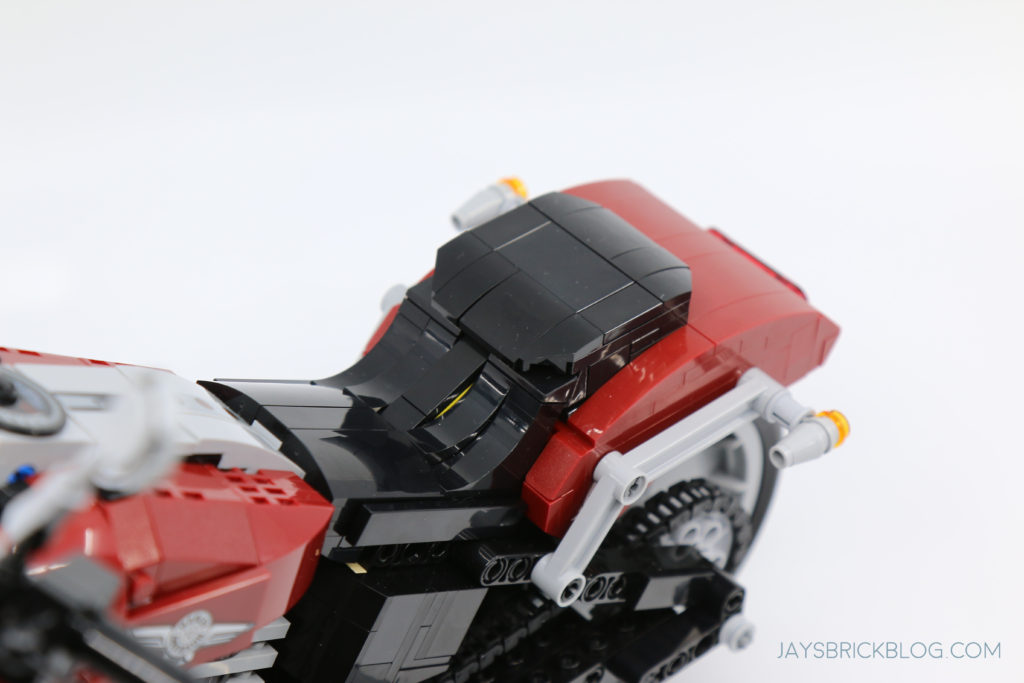 Here’s a look at the seat. 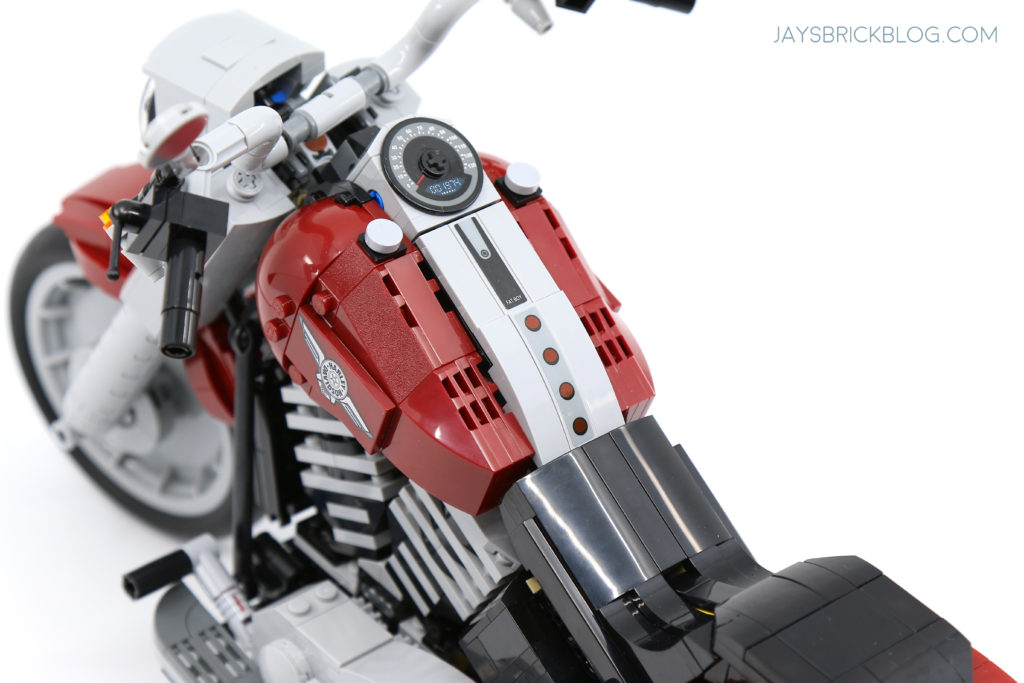 And here’s a look at the front, with the speedometer. 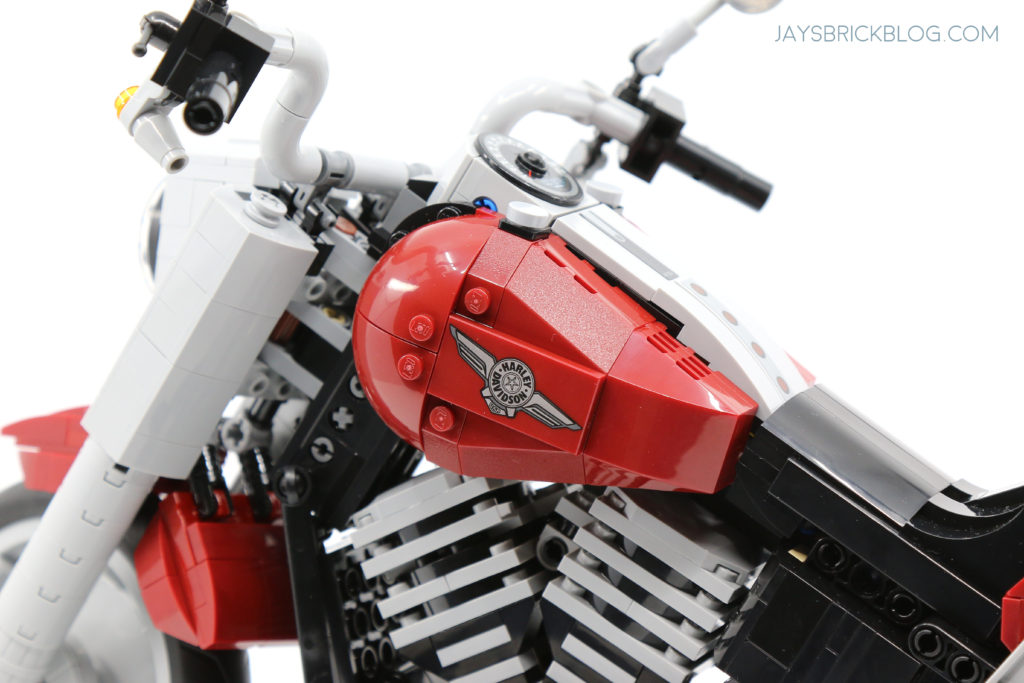 Here’s a closer look at the iconic printed Harley Davidson logo, which is placed on the fuel tank – it’s one of the other parts of the bike that the designers managed to replicate so particularly well. 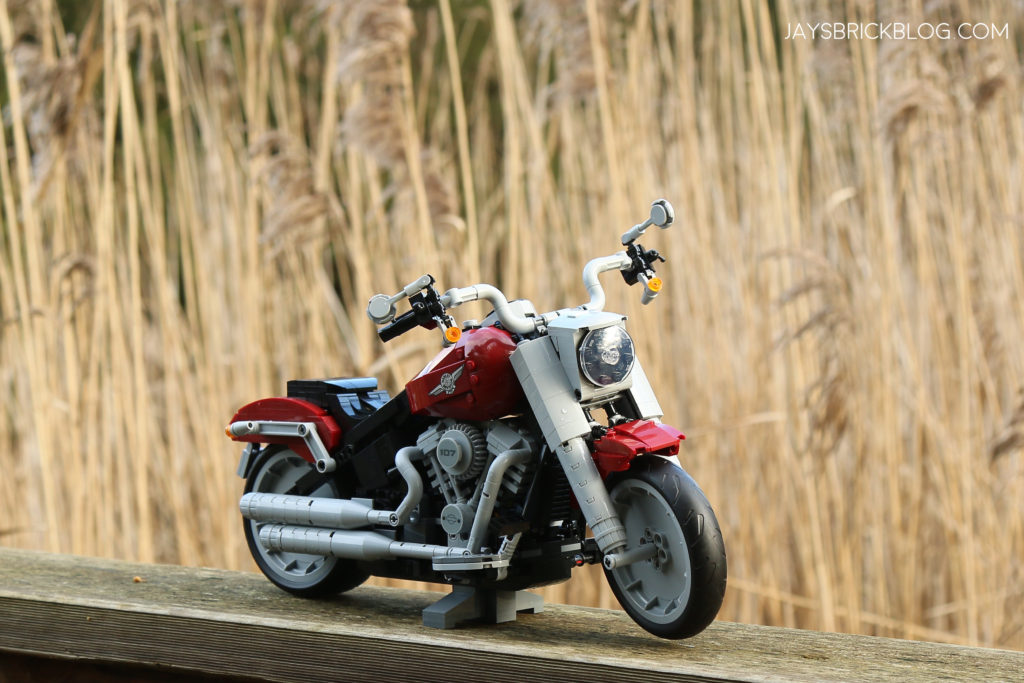 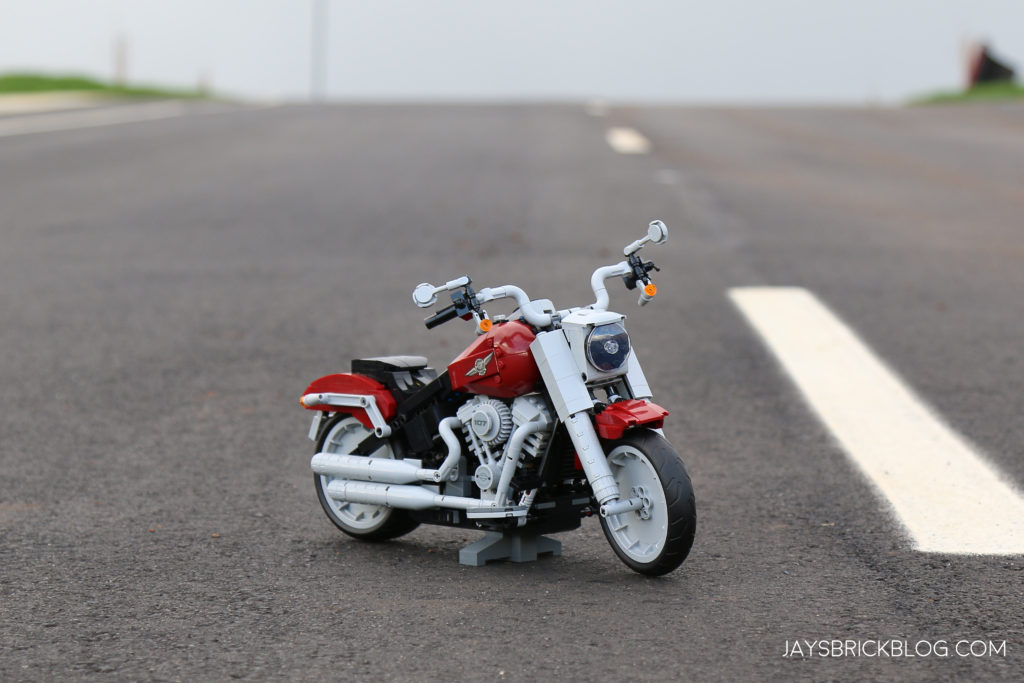 Final thoughts: There’s no denying that the Harley-Davidson is such a design triumph for LEGO and I enjoyed every bit of this set way more than I thought I would.

From the very first bag, the build was enjoyable from start to finish, even for a LEGO veteran like myself. The novelty of the build, which did an amazing job blending regular LEGO elements with Technic was such a breath of fresh air.

The build and design proves that LEGO still can innovate and flex their design prowess, taking on a shape as challenging as a Harley Davidson and nailing the design so faithfully. 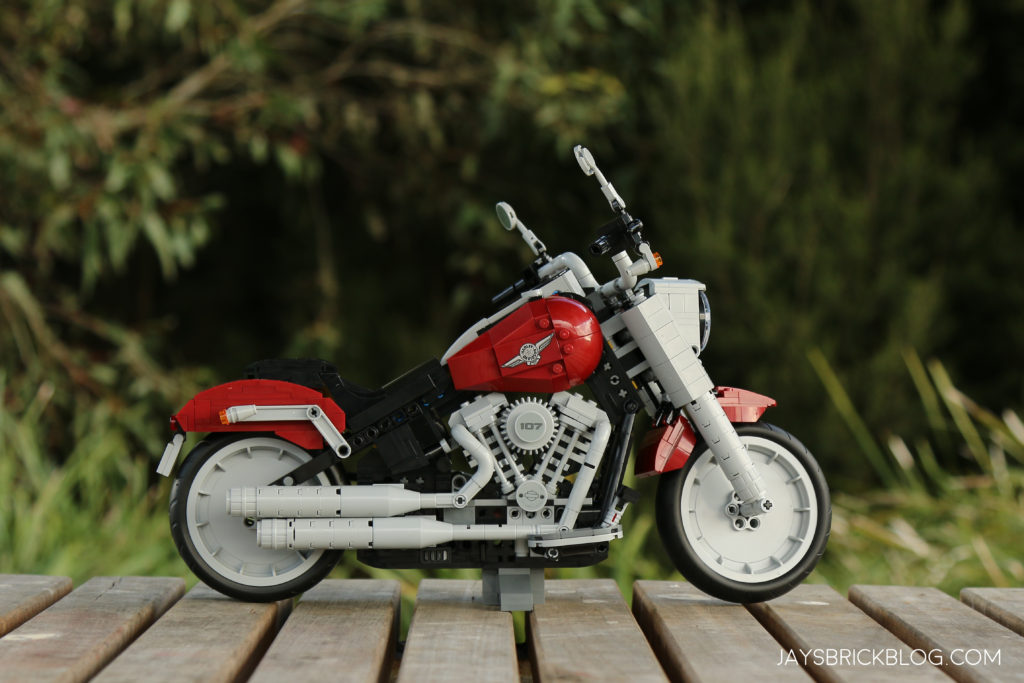 There’s also no denying that this is an extremely stunning model to look at. The initial photos were great, but they don’t really do the set justice as many of its best features show themselves as you take time to appreciate it up close.

Could it be improved? Of course. As good as the design is, it’s missing all the chrome goodness that well-maintained Harleys are known for. That would be prohibitively expensive, but it’s nice to dream about an alternate model with all-chrome parts. 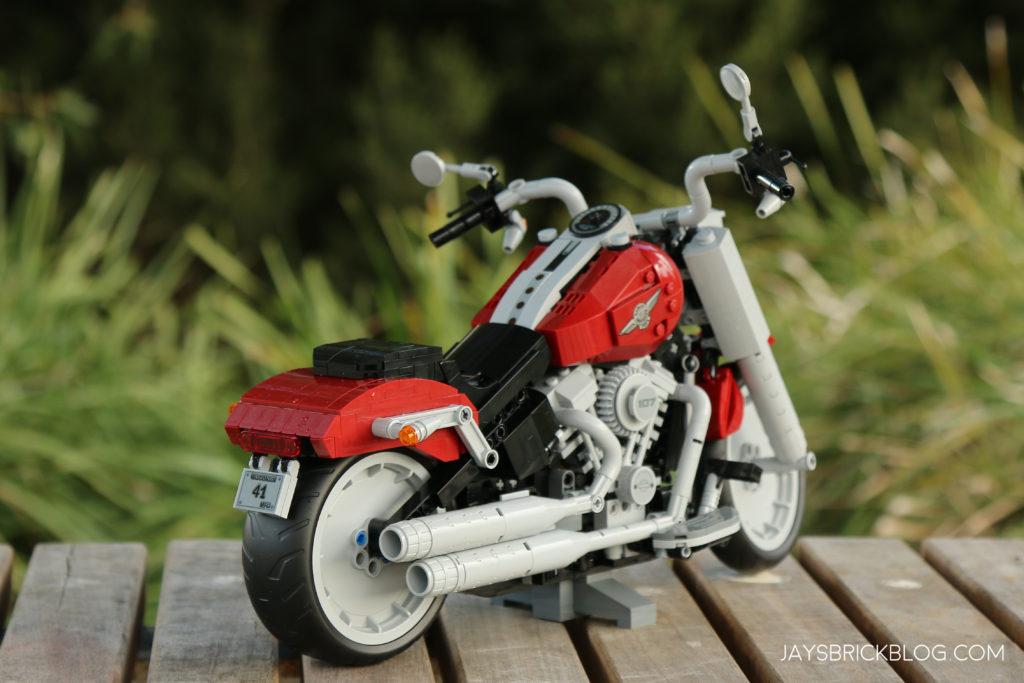 I liked the LEGO Harley-Davidson so much more than I thought I would, mostly because I am an ardent collector of Creator Expert cars and I was apprehensive about whether a motorcycle could do it for me.

Turns out the answer is yes when LEGO are capable of putting out such an amazing Creator Expert model, at quite an affordable price.

Despite not being a Harley-Davidson or even a motorbike fan, I could still appreciate this set for what it is – an exhilarating all-round LEGO experience.

As one of the cheapest Creator Expert sets on the market, I can highly recommend 10269 Harley-Davidson. With the Christmas holidays approaching, if you haven’t picked this set up, it would make a pretty sweet present come the holidays.

Oh and in case you’re wondering, yes it does fit in well with the other Creator Expert vehicles, despite the scaling being a teeny bit off, haha. 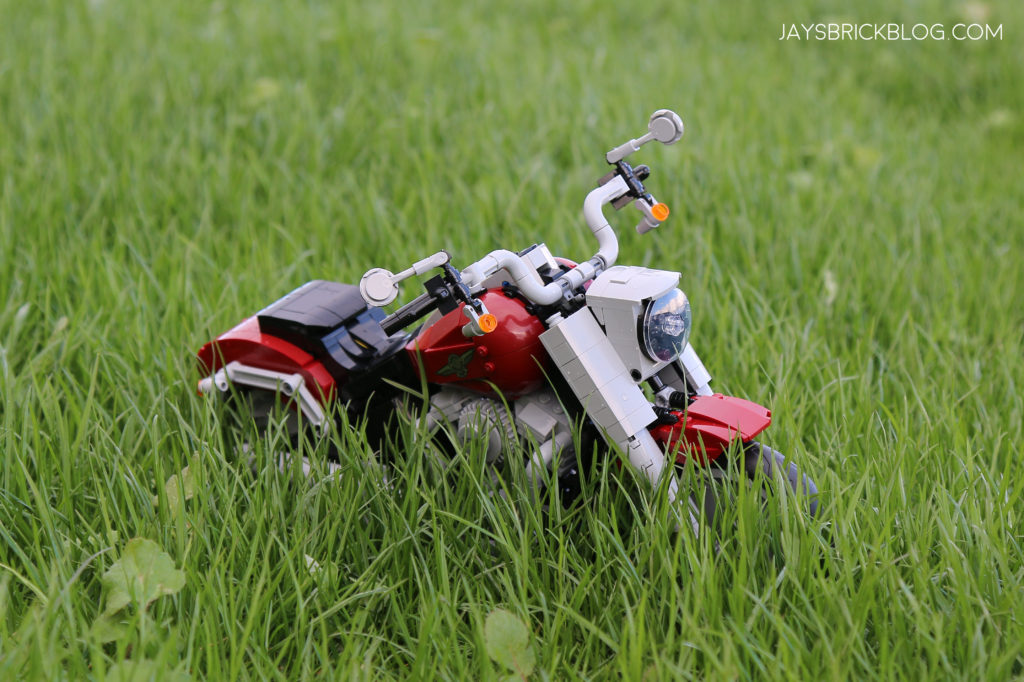 If you’re looking for an accessible Creator Expert set that’s a lot of fun to build, and looks great on display, look no further than the Harley-Davidson.

The LEGO Harley Davidson is available for purchase from LEGO.com or your local LEGO Brand Retail Store.

Special thanks to LEGO for sending this set for this review.

Thanks for reading! Hope you enjoyed this review! As you can tell by all the outdoor photos, I had a blast photographing the set, and who could blame me when I have such a photogenic LEGO set to work with.

If you own the LEGO Harley-Davidson and have yours built, I’d love to know what you like most about the set in the comments. 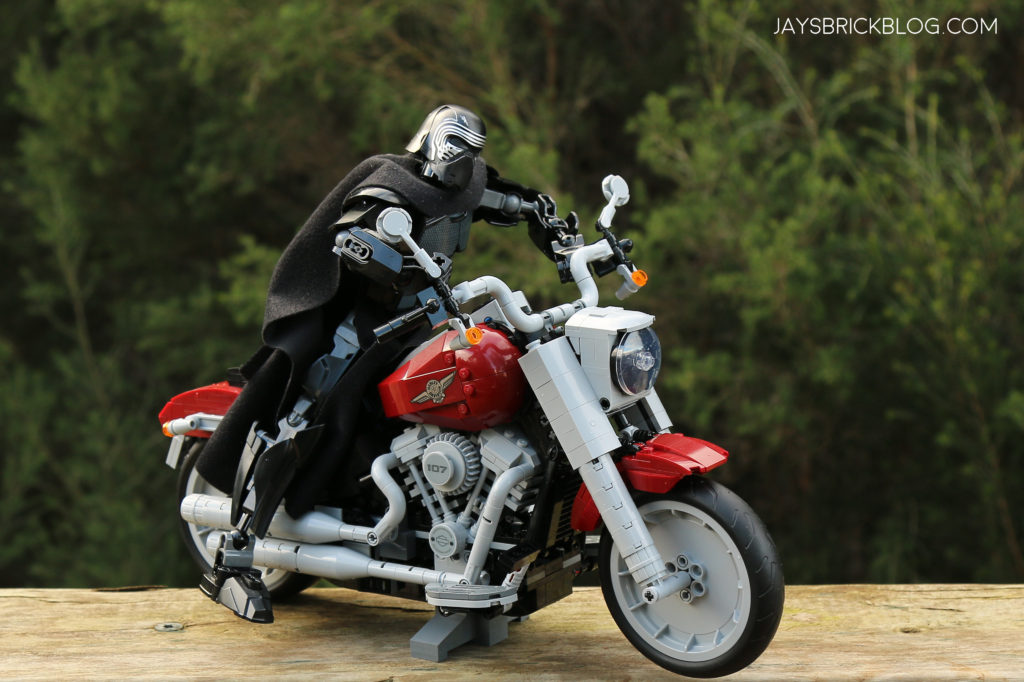 Oh and another fun thing about the LEGO Harley-Davidson? The Star Wars constraction figures are just the perfect size to pose with them.

Enjoy this photo of Kylo Ren with his middle-aged crisis purchase.