There’s no theme I’m more excited about this year than LEGO Elves. The fresh and frankly, brave new LEGO theme which sends fans on an adventure exploring a new world filled with fantasy, elves and mystical energies is a great move from LEGO. Elves represents LEGO’s next step to conquer the female market and builds upon the success of LEGO Friends which I am also a huge fan of.

For my introduction to this new theme, do check out my What is LEGO Elves post. The LEGO Elves sets are finally here in Australia and I’m extremely proud to pick Naida’s Spa Secret as my inaugural LEGO Elves review. Enjoy! 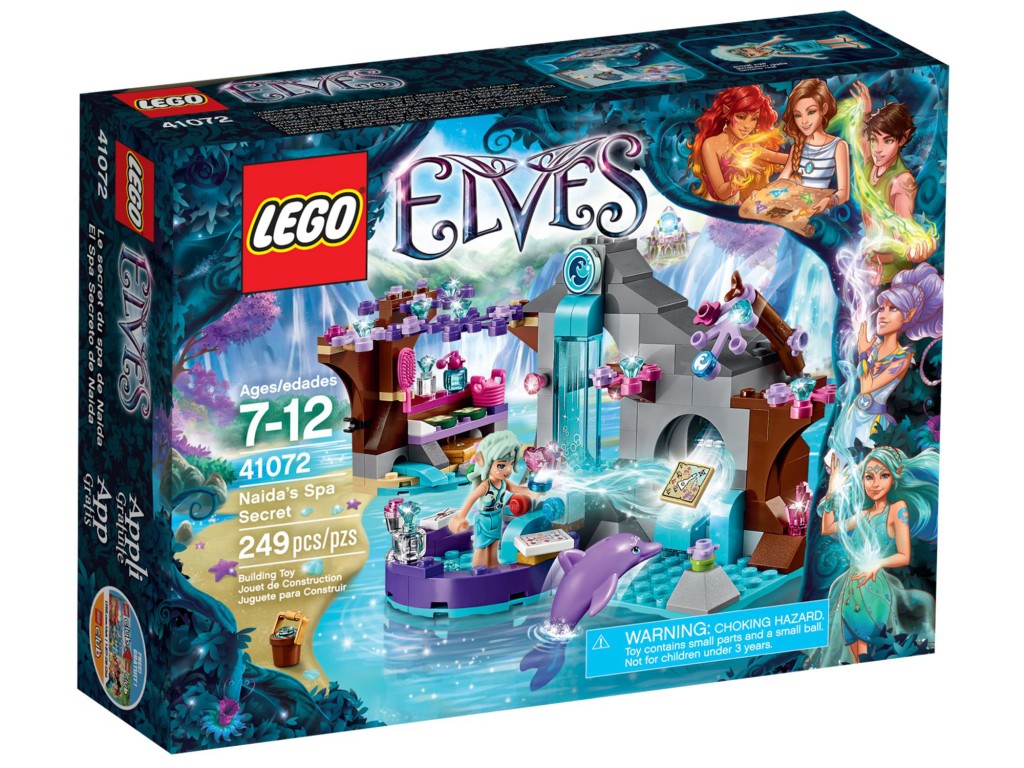 Working in marketing has allowed me to gain a unique perspective on the decisions companies make and I’ve come to learn to respect brands that are willing to take big risks. Friends was an incredibly bold move by LEGO and one that has paid dividends many times over.

Elves is another brave step – building on the success of LEGO Friends and taking the (now iconic) Minidolls and brilliant pastel colour palette into fantasy settings has earned major points in my book.

Naida’s Spa Secret is the second smallest set from Elves. Despite the awkward name (my mind keeps reading it as Naida’s Secret Spa, because that makes so much more sense to me), it was a great introduction to the Elves theme. 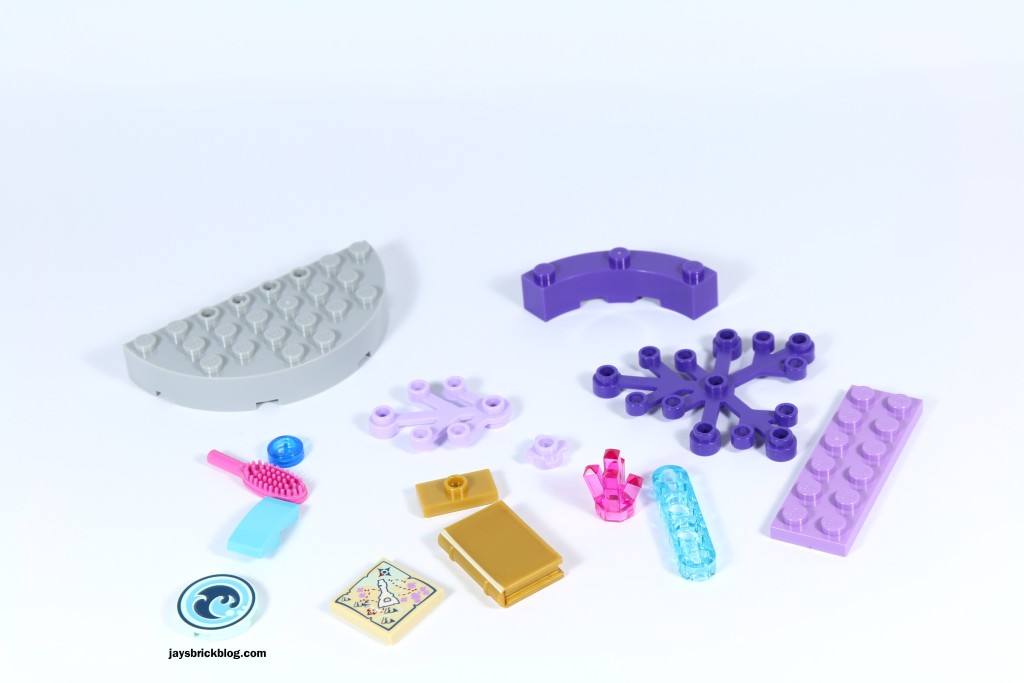 To be honest, the LEGO fan in me couldn’t care less about the music videos, animations and carefully fleshed out plot of Elves but I can see that these elements will (hopefully) resonate with the younger demographic. Just like LEGO Friends, my intrigue for LEGO Elves lie in the wonderful array of new colours and elements that you simply cannot find in other LEGO sets and themes.

The picture above highlights some of the parts that stood out to me in this set, with the most interesting being the lavender, purple and magenta (I totally left out the magenta variants) tree leaves.

Elves’ fantasy setting allowed LEGO to introduce a wealth of new mystical elements that would probably look out of place in Friends but fit perfectly in a universe where magic and talking animals are the status quo. I’m super excited about these new parts and I hope you share my enthusiasm for them too! 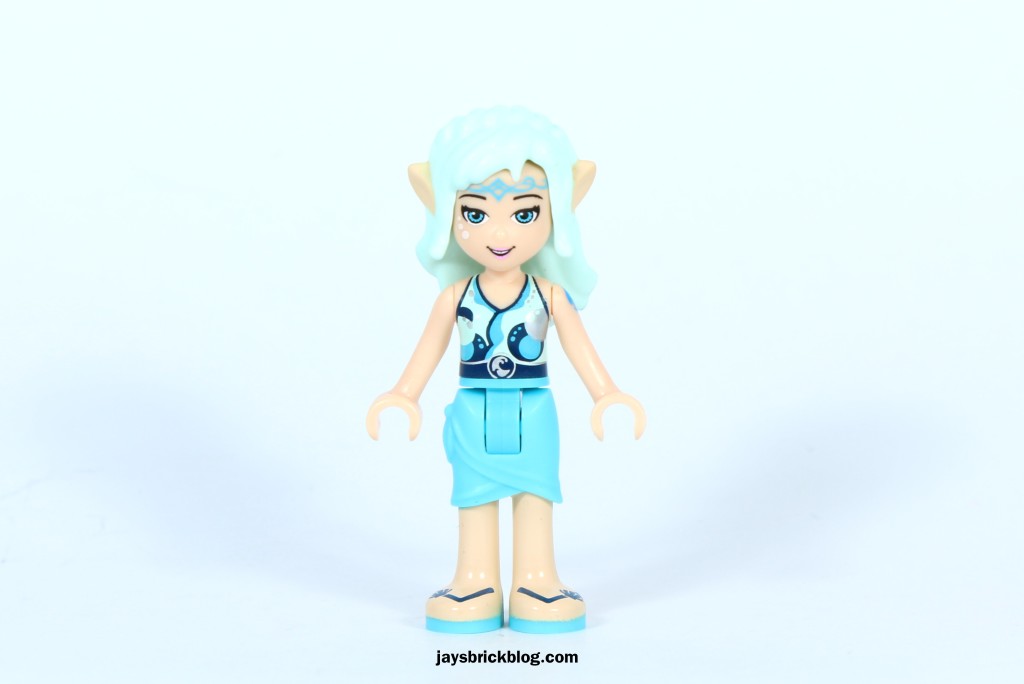 Meet Naida Riverheart, one of the protagonists of Elves. Just like Friends, LEGO have gone to great lengths to develop interesting personas to allow kids to better relate and role play with the sets. As her name suggests, Naida Riverheart is attuned to the Water element, which is reflected in her aqua-coloured attire and hair.

Naida has an otherworldly charm that is manifested through gorgeous printed details on her face and a beautifully designed halter neck top and skirt. 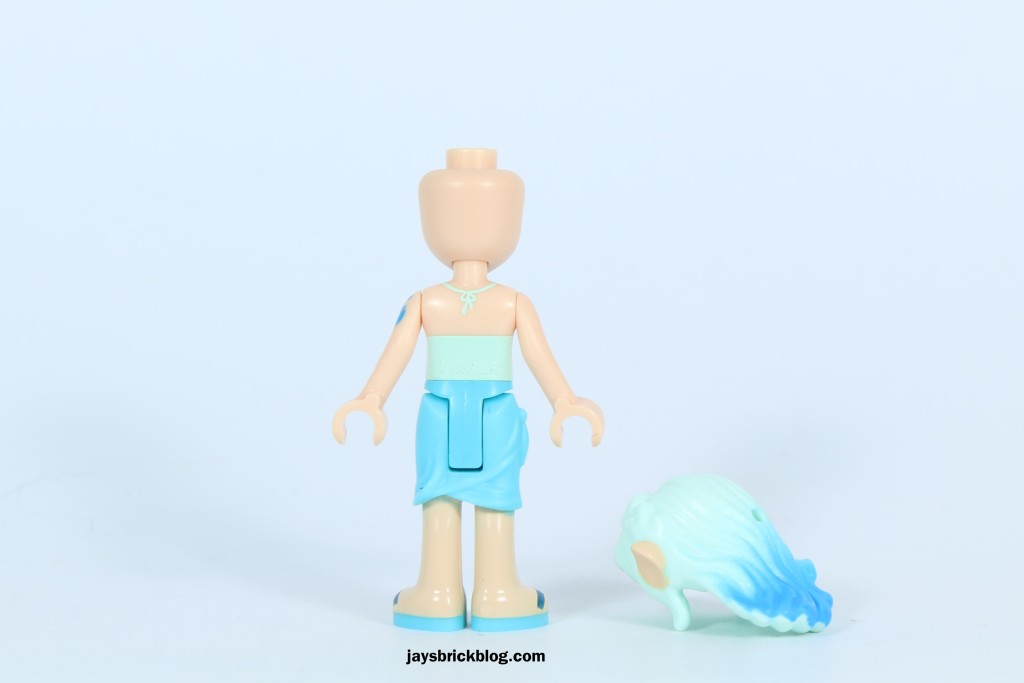 Naida’s body printing is one of the best I’ve ever come across – all the tiny little details such as her halter top’s neck strap are sharply printed and add so much to her character. Her hair is made out of the same substance as LEGO Friends hairpieces – soft, squishy and slightly rubbery plastic.

Pointed Elven ears are built into the hairpiece, which has an amazing colour gradient that just looks immaculate. I’m not even bothered that the hair is made out of the soft rubbery plastic that I traditionally hate – it just looks that good. 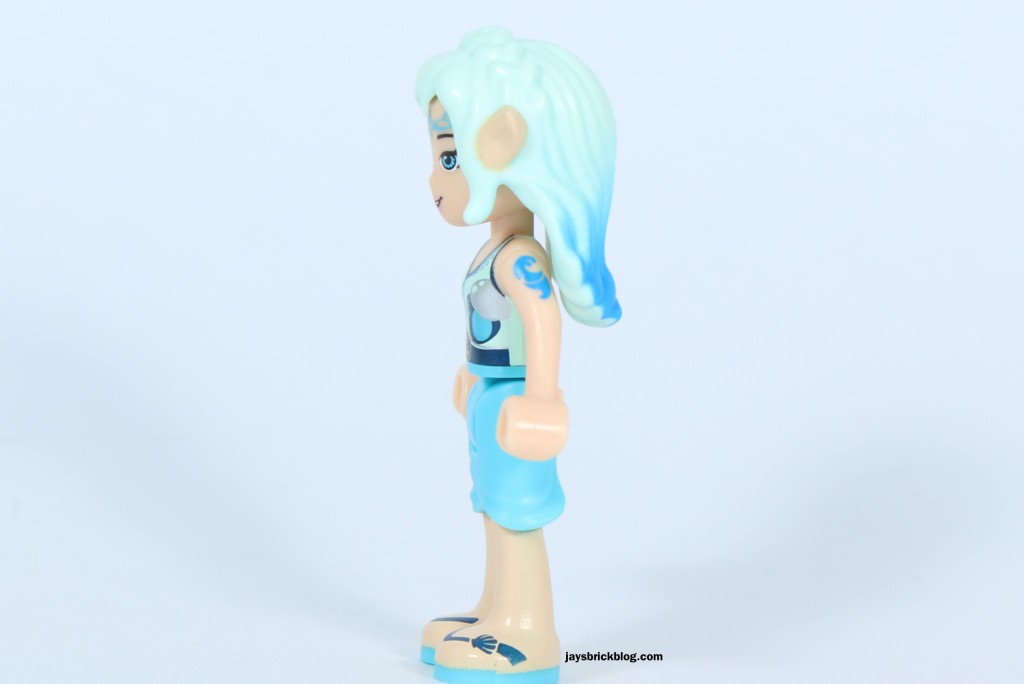 I was really surprised by Naida’s tattoo on her left arm, and equally impressed by the printing on her legs where she has pair of thongs (flip flops, for you non-Australians) with scallop shells on them. It’s immediately apparent that LEGO put it a lot of care and thought when designing the  Elves minidolls and boy did it pay off. 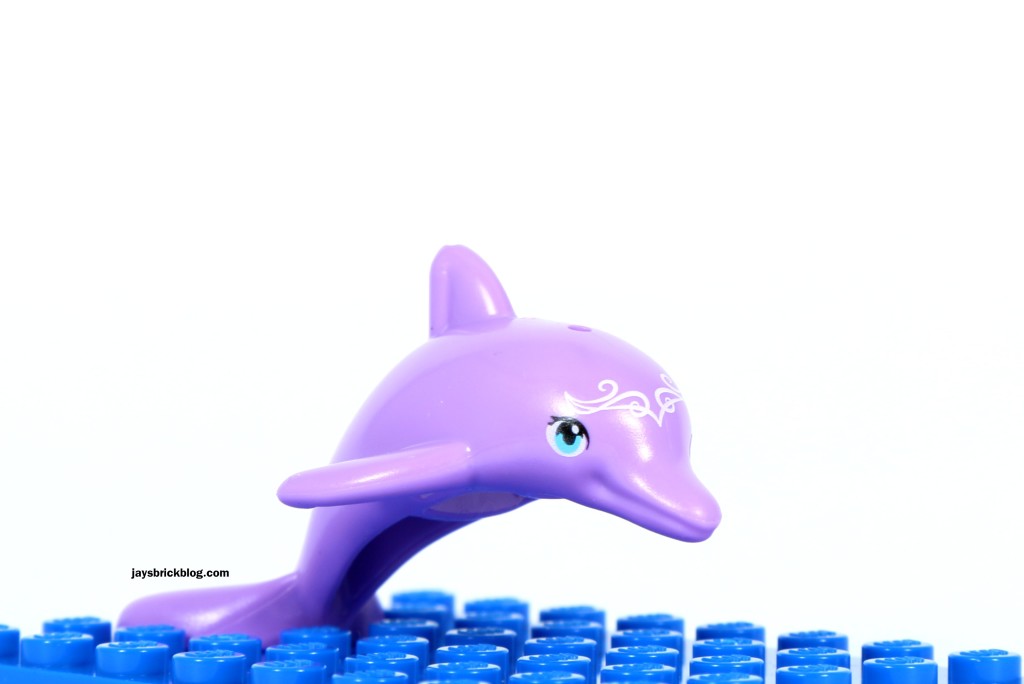 We also get a magical pink/purple dolphin named Delphia who kinda hangs out at the Spa. Since this is the magical world of Elves, I’m pretty sure the Dolphin is capable of speech.

Delphia has some Elvish printing on her brow, which makes her look pretty mystical and stuff. It’s also the first pink and purple dolphin variant which is pretty cool. 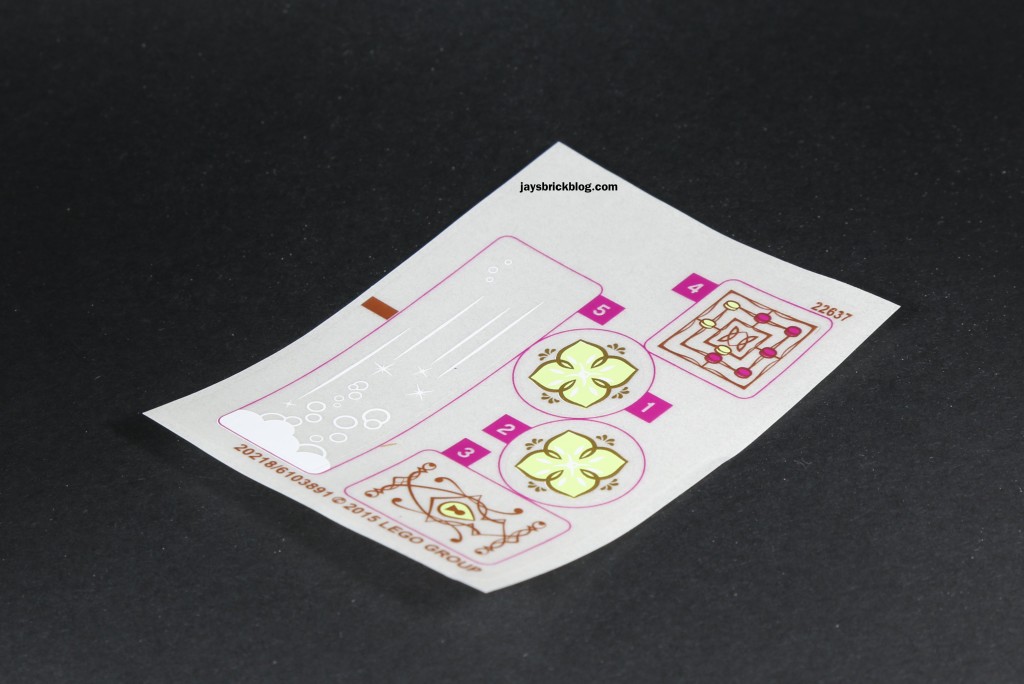 Before we get into the main build, here’s a look at the sticker sheet included. Most of the stickers (except for the waterfall) aren’t essential so if you’re the type of person that hates stickers, you’re more than welcome to not apply them. I like that the stickers are transparent decal stickers, which make them look a lot better than the paper type ones. 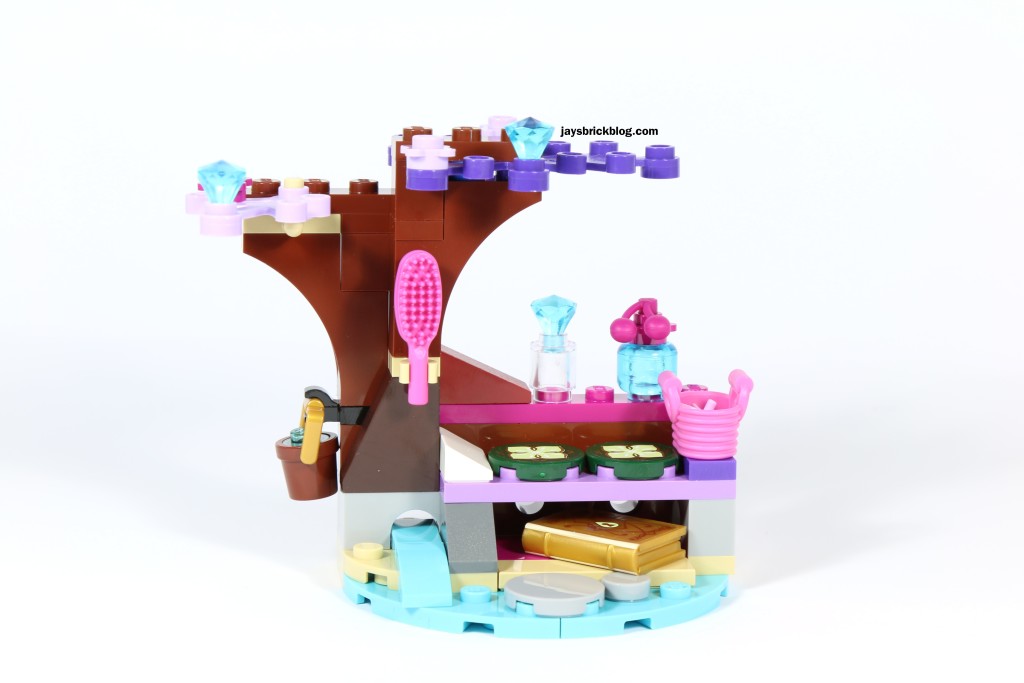 The first thing you assemble is a little enclave of Naida’s Spa which has a day bed (or sofa) and tons of little accessories like perfume bottles, a hair brush and Naida’s golden diary. 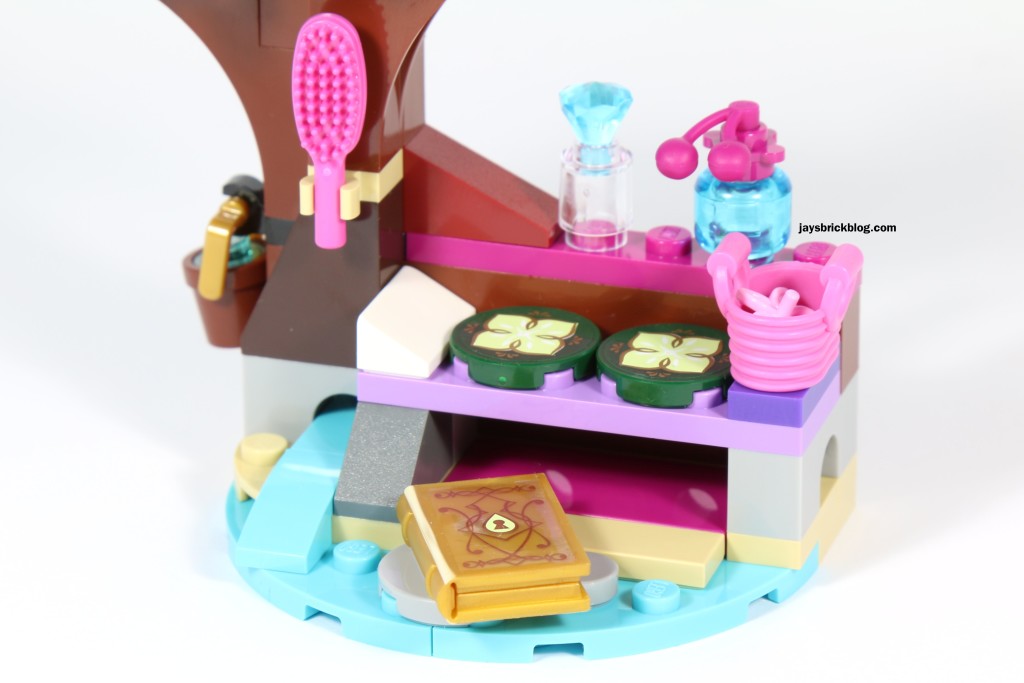 If I hadn’t checked out the official set description, I wouldn’t have known that this was a daybed. I guess the white 2 x 1 cheese slop gives some sort of indication that it’s pillow, but I thought that this was more like an area where Naida prepared all sorts of nice smelling bath soaps or where she kept her supplies.

Despite being a small build, I like that all the accessories and spa supplies are kept here as it means that the main spa area is a lot less cluttered. The tiny accessories and small tree with those gorgeous new purple and lavender leaves are a nice bonus too. 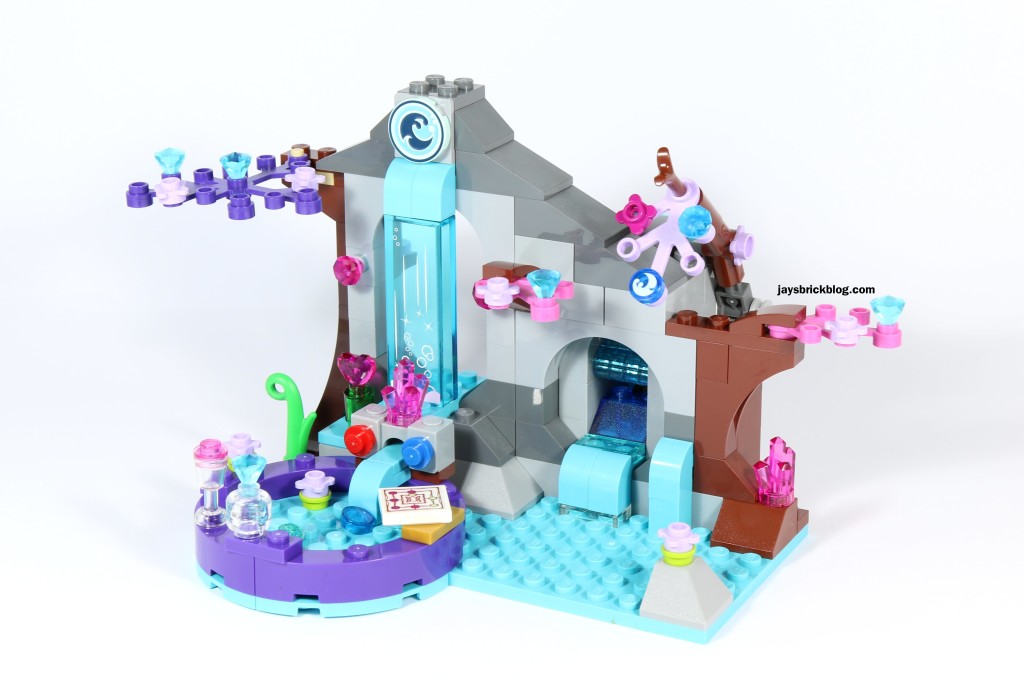 Naida’s Spa is a compact yet busy scene which contains a wealth of details and of course, a juicy secret. The Spa is built into a cave which sports a waterfall that supplies the bath area with water and another watery area for Delphia to frolic.

Naida’s Spa Secret embodies all the great pastel-coloured elements which contain many mystical and magical flourishes such as the abundance of crystals, jewels and otherworldly pieces of foliage. It’s bright, colourful and has an air of mystery and magic which you simply cannot find in any other LEGO theme on the market. 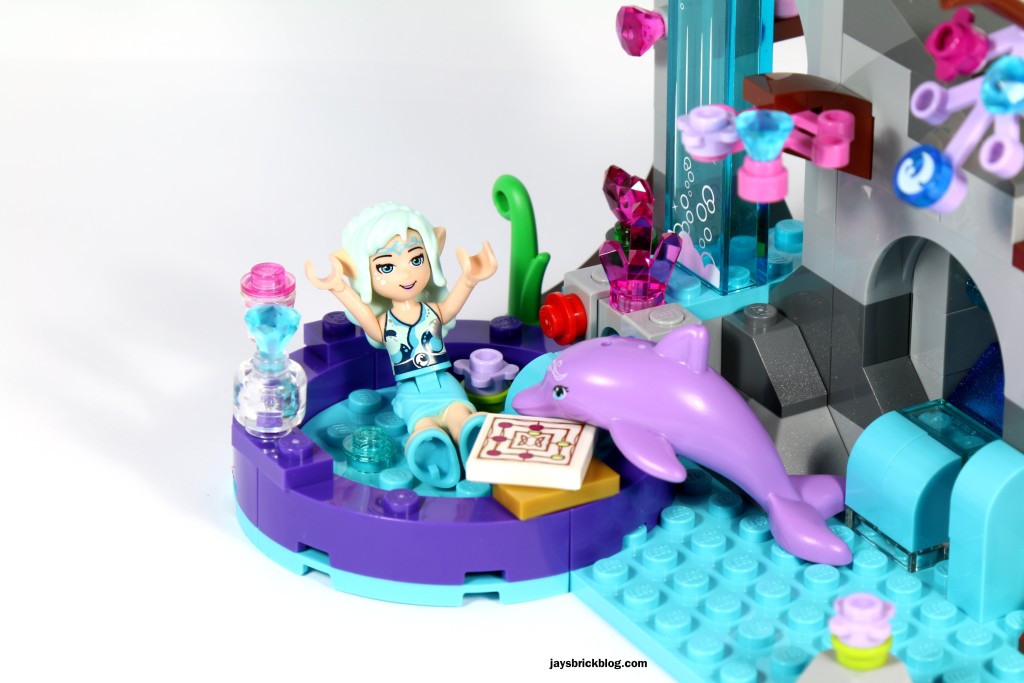 The Spa is a simple ring of purple bricks which has space for a board game (stickered tile), a bottle of bath gel and even an Elven glass of umm, bubbly. Seems like the perfect place to put your feet up and enjoy the magical waters – they can be controlled by hot and cold knobs, which I think is a very clever and sensible inclusion! 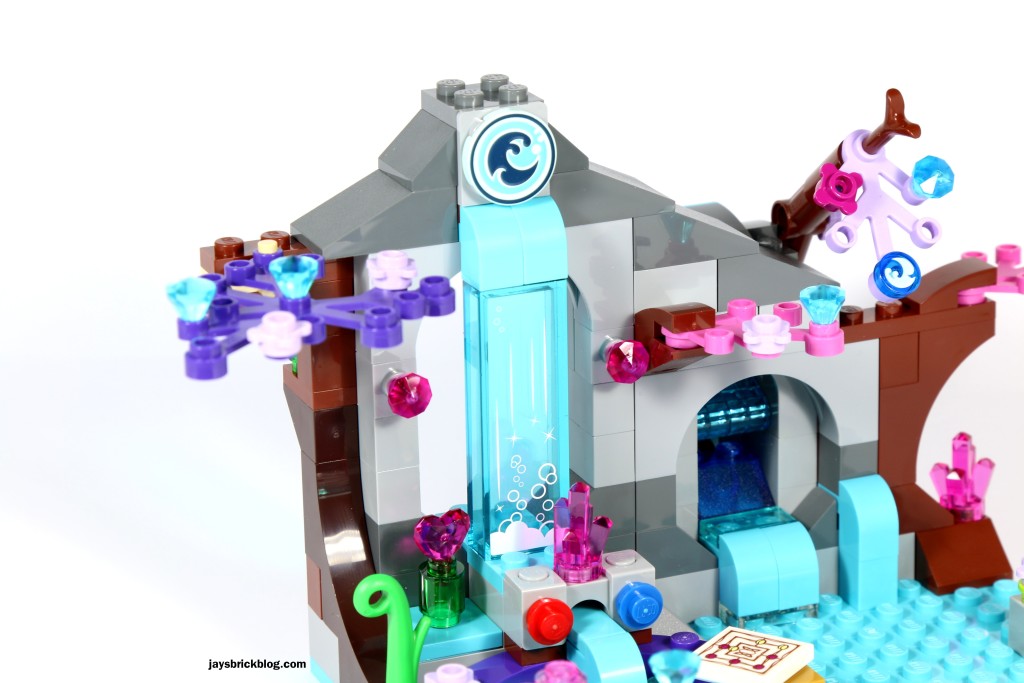 The waterfall looks really good and you can see that its flanked by jewels protruding from the rock face which helps with breaking up all drab grey bricks. The colours go pretty well together and there’s a fascinating mix of greys, browns and the pastel colours which makes this set very eye-catching. 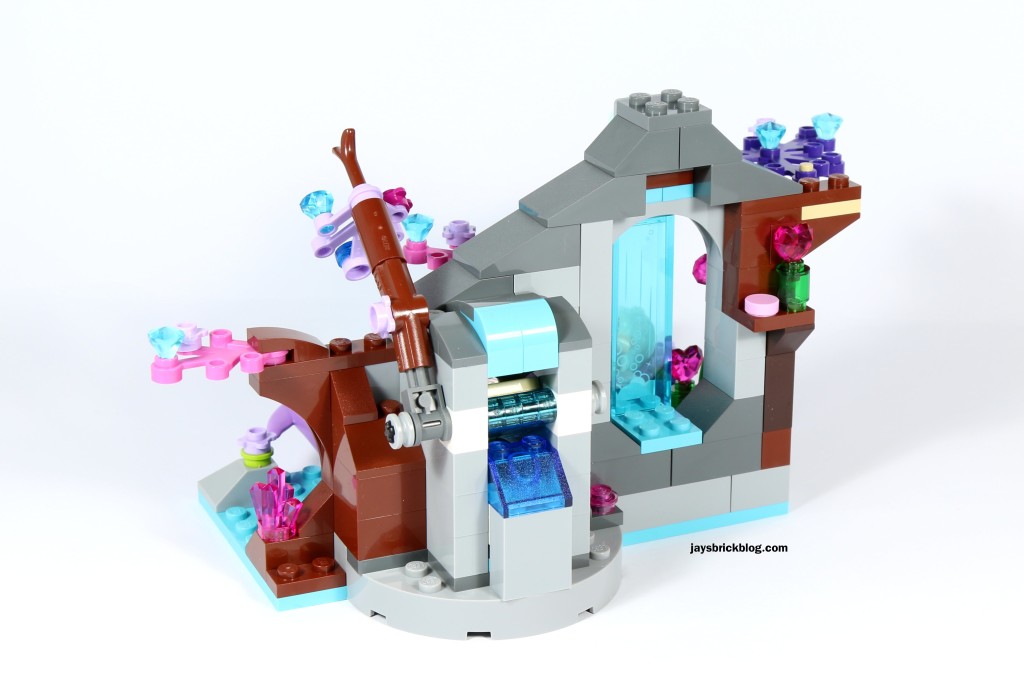 Here’s the view from the back which allows you to see the shower space behind the waterfall – there’s some soap and shampoo conveniently placed on a nearby ledge. You’ll also notice a weird contraption which involves a branch that looks like a lever and what seems to be a lot – one of the only play features incorporated into this set. 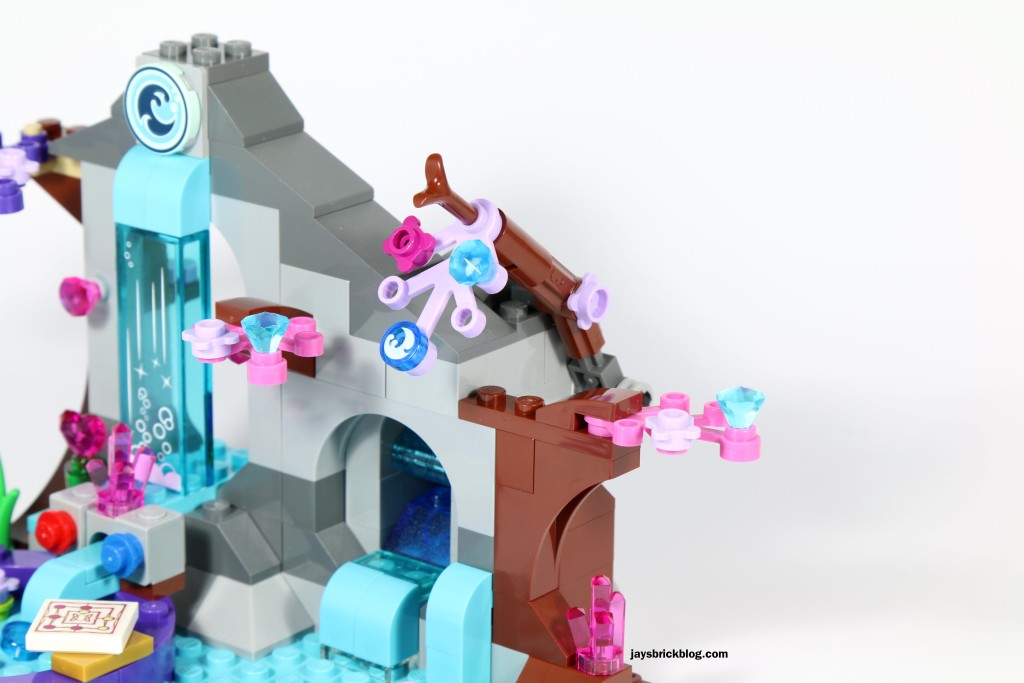 The play feature is simple but quite fun – it’s kind of like a slot machine, where you tug the branch down to reveal the Spa’s secret. That flat blue 1 x 1 tile is printed and has Naida’s mystical water sign on it.

Here’s a GIF of it in action. You nudge the leaf (gently!) and a map tile pops out of nowhere! I think this play feature is exceptionally designed – I had a lot of fun playing with it over and over again. It’s a pretty satisfying action that’s cleverly and subtly built into this set. 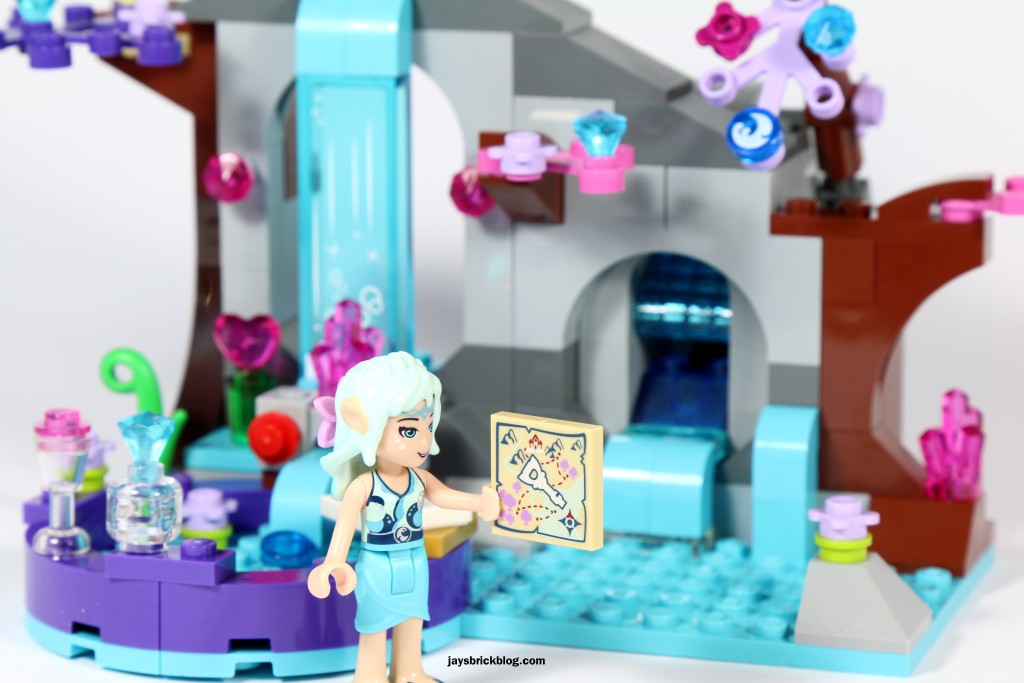 Here’s a closer look at the mysterious map. Naida looks pretty pleased to have found it. The map supposedly leads the Elves to find some sort of key that will help return the human protagonist Emily Jones back to her world. 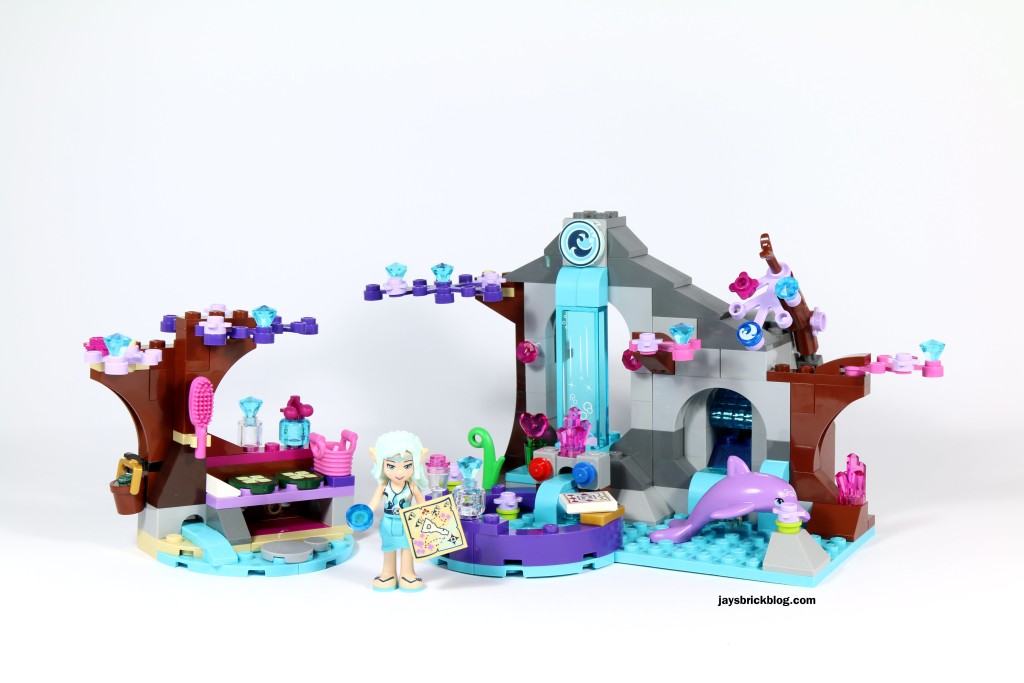 Final thoughts: Naida’s Spa Secret is the very first Elves set that I put together and what can I say, I am in love with LEGO’s fantastic new theme. The set does an awesome job capturing the mystical nature of the new Elves universe in brick form thanks to a wonderful blend of pastel coloured elements which have very convincing organic and mystical designs.

As a set, Naida’s Spa Secret is a veritable treasure trove of parts that will delight any serious builder. The grey slopes are always useful for rockfaces, the brown arches are always in need for trees and all the foliage and uncommon colours are great additions to my LEGO inventory.

Above all, Naida’s Spa Secret is fun, simple and is quite a great introduction to the magic of the Elves theme. It was a really easy build and most of all, I enjoyed just admiring and playing around with all the new coloured parts.

Despite being simple, the set also manages to include some very subtle designs such as using curved slopes to create a dynamic running water effect as well as the generous use of the new purple, lavender and magenta leaves that bear crystal fruit.

I couldn’t really find anything that I really disliked about this set, and I hope that you will be brave enough to embrace and enter the wonderful world of LEGO Elves. Don’t let the girly tones fool you, this set is a great starting point to set you on a journey to discover the colourful characters (and parts) that are the hallmark of Elves.