It’s been a few months since I last reviewed a LEGO Elves set (Naida’s Spa Secret, in case you were wondering) which is a bit of a shame as I believe that Elves is still one of the most exciting new themes to come out of LEGO in awhile. I guess it’s also a testament to LEGO’s offering this year, with so many impressive sets on the market that it’s hard to find time to review them all!

That said, I set aside some time the other day to crack open my second Elves set – Azari and the Magical Bakery, a wonderful structural Elves set that’s both vibrant and colourful. If you’re unfamiliar with the theme, I highly recommend checking out my What is LEGO Elves post for a quick introduction to the mystical world of Elvendale. 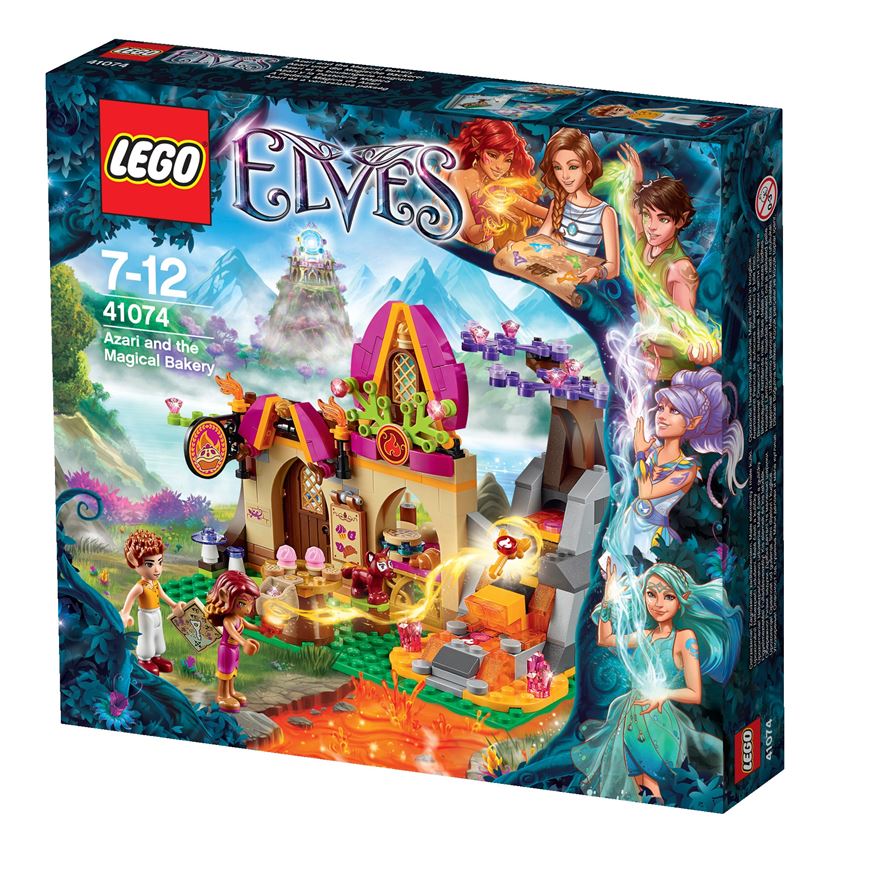 It’s a little ironic, but proper buildings tend to be quite rare in the LEGO world. Outside of Modulars and Creator structures, you rarely get fully fledged LEGO buildings any more. Friends has been decent with providing us with pseudo-buildings, which are more like shopfronts or dollhouses as they have exposed backs which help boost the playablity of the sets.

Azari and the Magical Bakery fits the mould – being more of a semi-structure than a complete building, which may or may not be a good thing. Before we get into the model, let’s take a look at the colourful characters in the set! 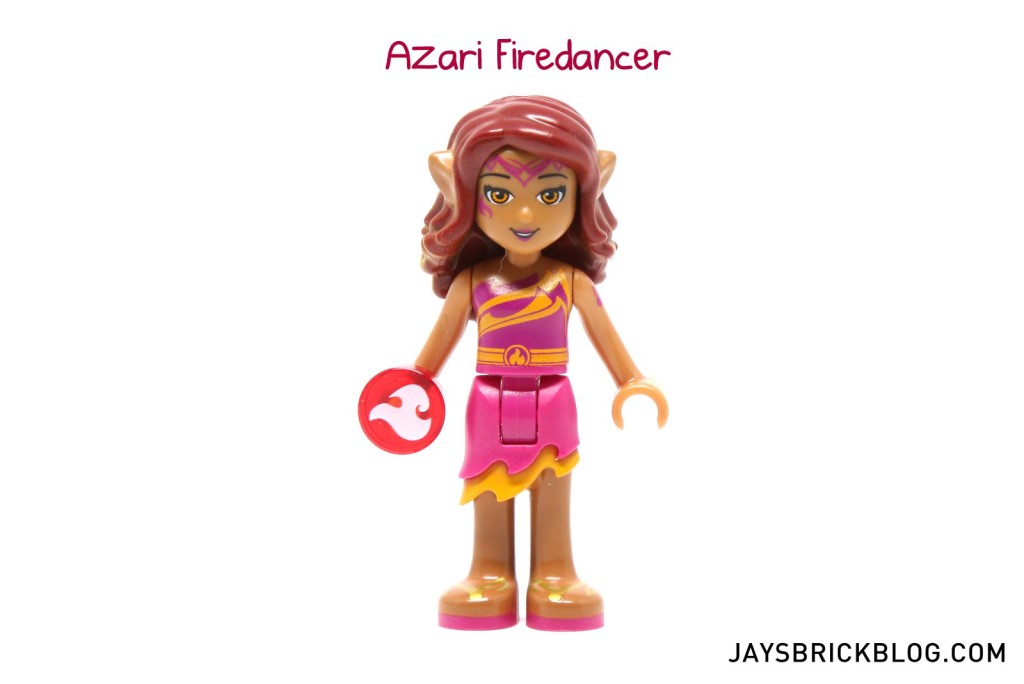 This is Azari Firedancer, the feisty and hot-headed titular character of the set. She’s not exclusive to this set, showing up in a polybag as well as the Elves’s Treetop Hideaway. Azari’s bold personality is accentuated by her flame-like attire, dark red hair and tanned complexion.

Like the other main characters, she also has pretty detailed tattoos adorning her body, but they’re pretty subtle as there isn’t a lot of contrast between her body ink and dark skin colour. 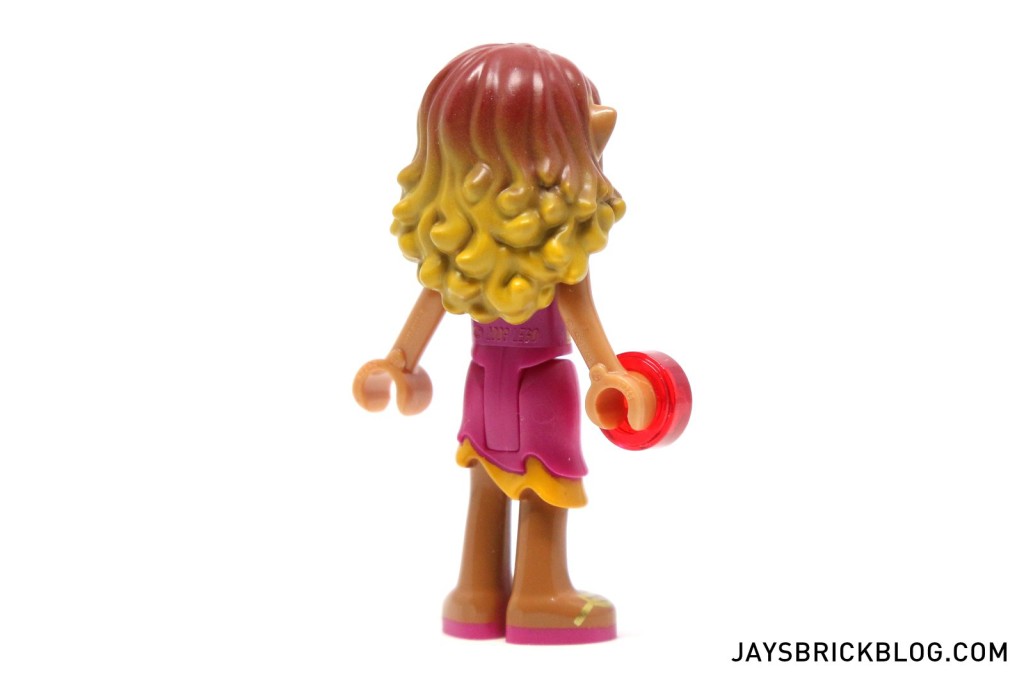 Azari’s hair is her most intriguing feature. It’s made out of rubbery soft plastic and has a ridiculously cool gradient effect and very detailed textures. 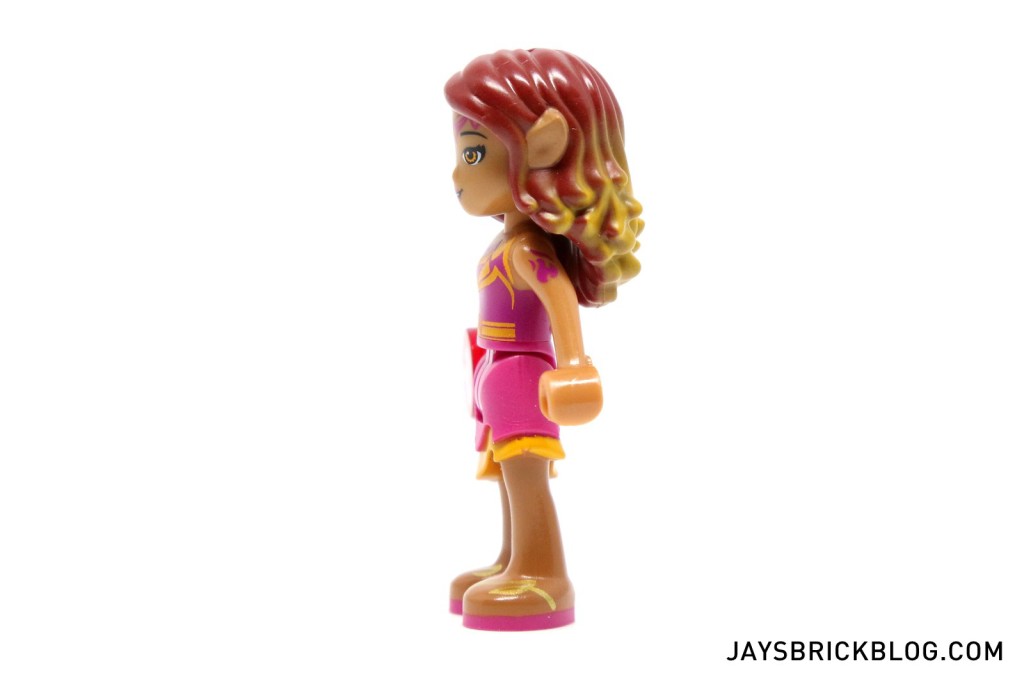 From the side, you can see her flame tattoo on her left arm as well as the Elvish ears that stick out from her hair. 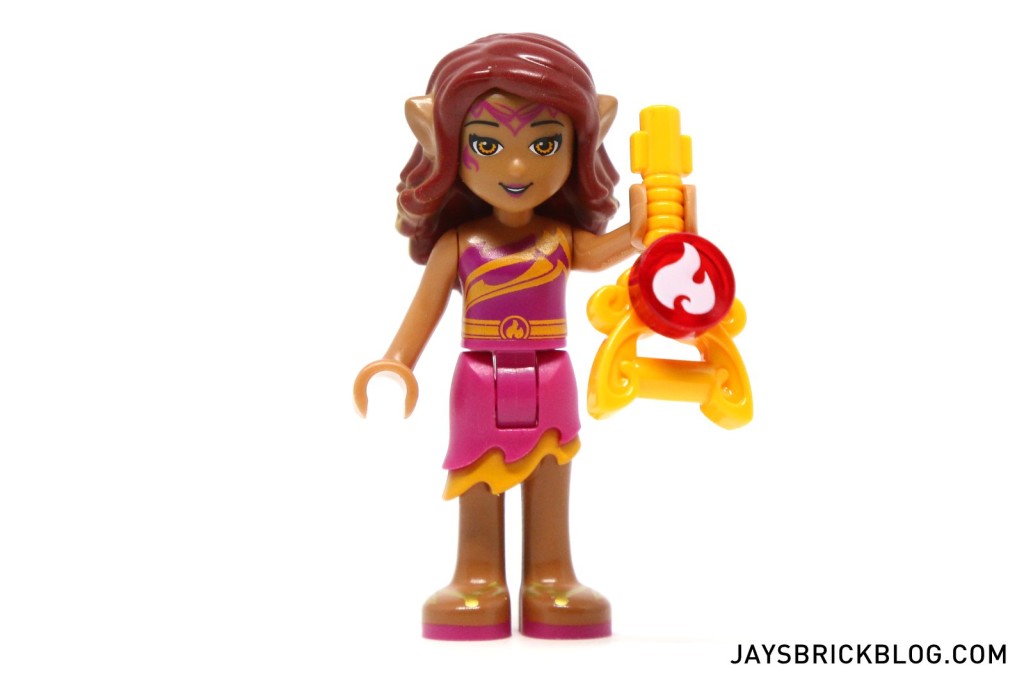 Azari comes with a magic key, an element of the Elves storyline which involves collecting all 4 of them to send the human protagonist Emily Jones home. I think that the key kinda looks like a miniature guitar.

I have to say that I quite like Azari Firedancer. The minidoll is pleasantly designed and there are some really great details such as her golden thongs (flip flops, to you non-Australians) and a spectacular hairpiece which wraps up the whole package.

I do wish that there was some variation to Azari’s minidoll in this set such an alternate outfit or face. 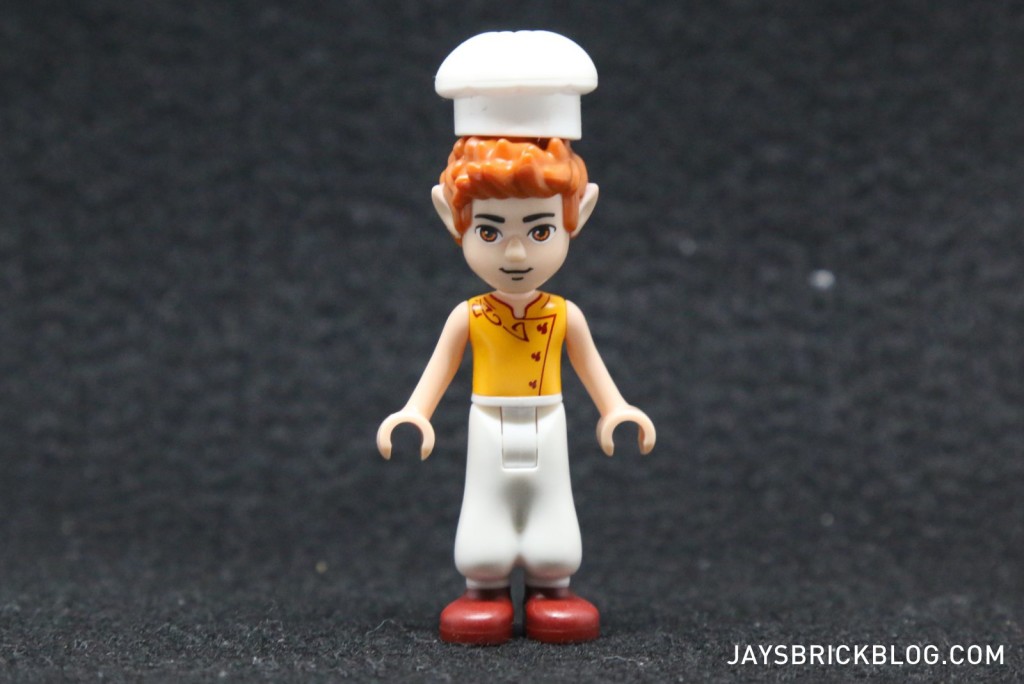 The proprietor of the magical bakery is Johnny Baker. I wonder what he does for a living. Mr. Baker is a male Elf, which makes him a bit of a rarity. Johnny is a redheaded Elf who sports a very similar hairdo to Series 6’s Sleepyhead except that this one has Elvish ears fused to the hairpiece.

And no, his chef’s hat isn’t attached to his hairpiece but I decided to just place it atop his head cause it looks cool that way. You can switch between his hair and chef’s hat, but I’m of the opinion that the hat on its own just looks weird on him as his ears mysteriously disappear. 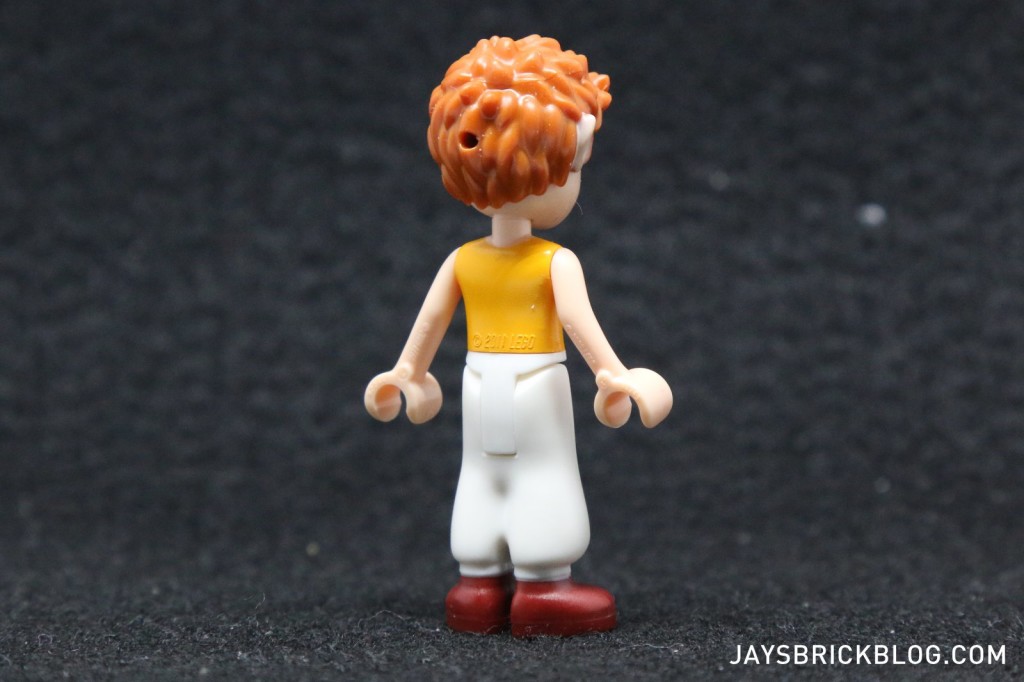 Strangely enough, Johnny Baker’s hairpiece has a small hole at the back, the same kind that allows you to slot in accessories such as hairclips and ribbons.

What I like most about Johnny is his terrific looking harem pants that give him a very distinct and Middle-Eastern look. It’s a really versatile leg piece that can be used for both male and female Friends minidolls and is also quite stylish to boot! 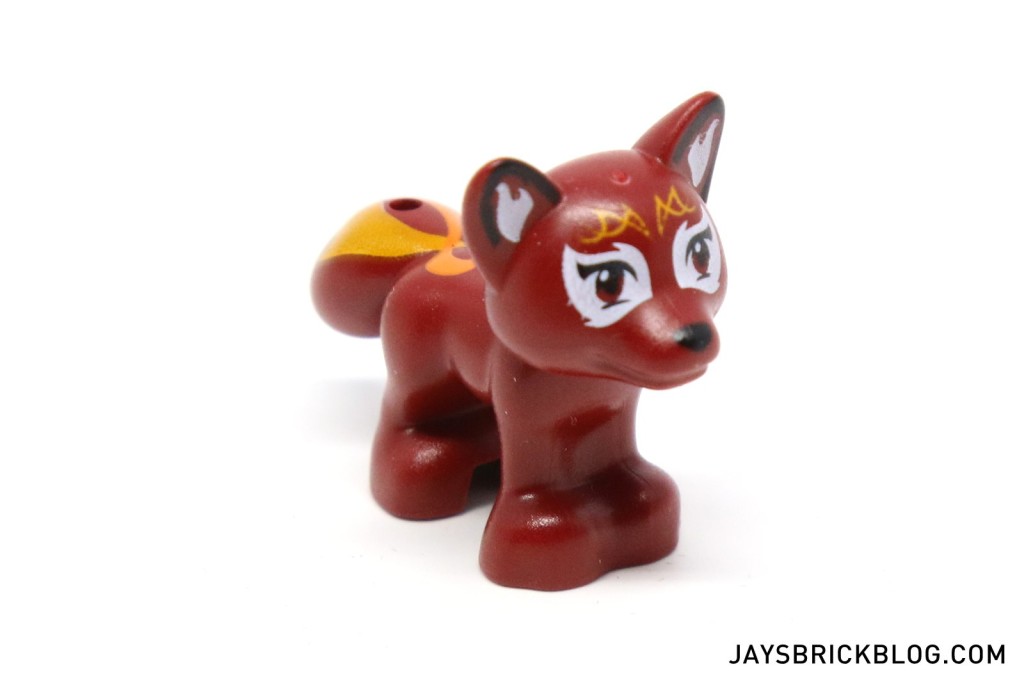 Meet Flamy the Fox – the magical Fire fox that sorta lives in the magical bakery. I have no idea if Flamy is Johnny’s pet or if he’s the actual owner of the bakery. Flame is pretty cute and has plenty of cool printed details on his face and across his body. Actually, I don’t know if Flamy is a boy or girl. 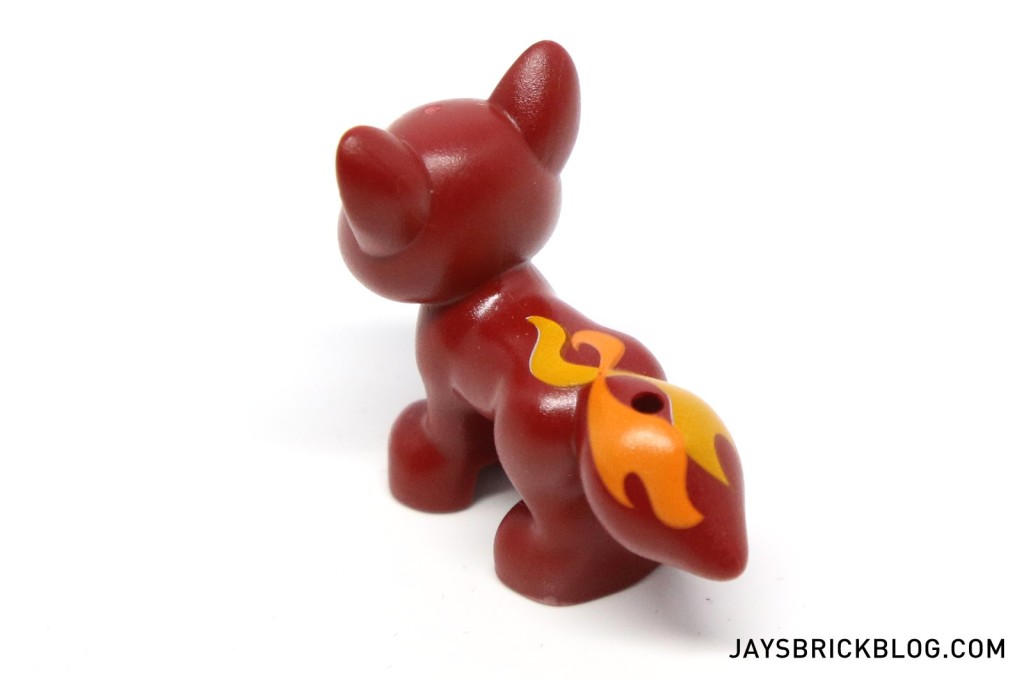 Here’s a closer look at Flamy’s printing on his tail and lower back. There’s also a hole for accessories if you’d like to style flamy up. 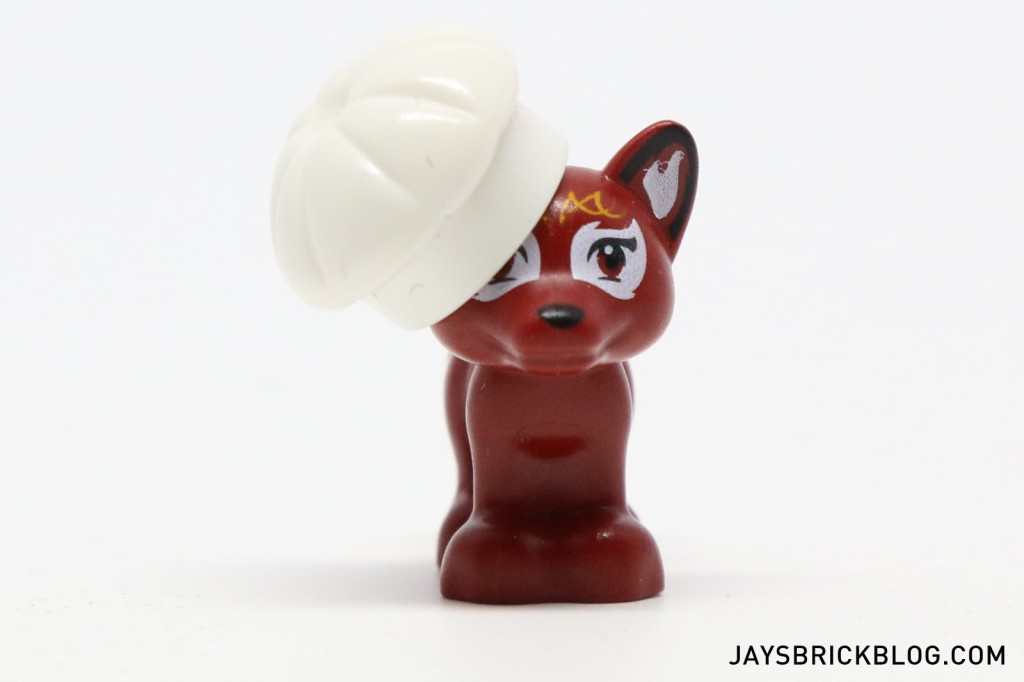 Flamy also looks very stylish with the chef’s hat on. 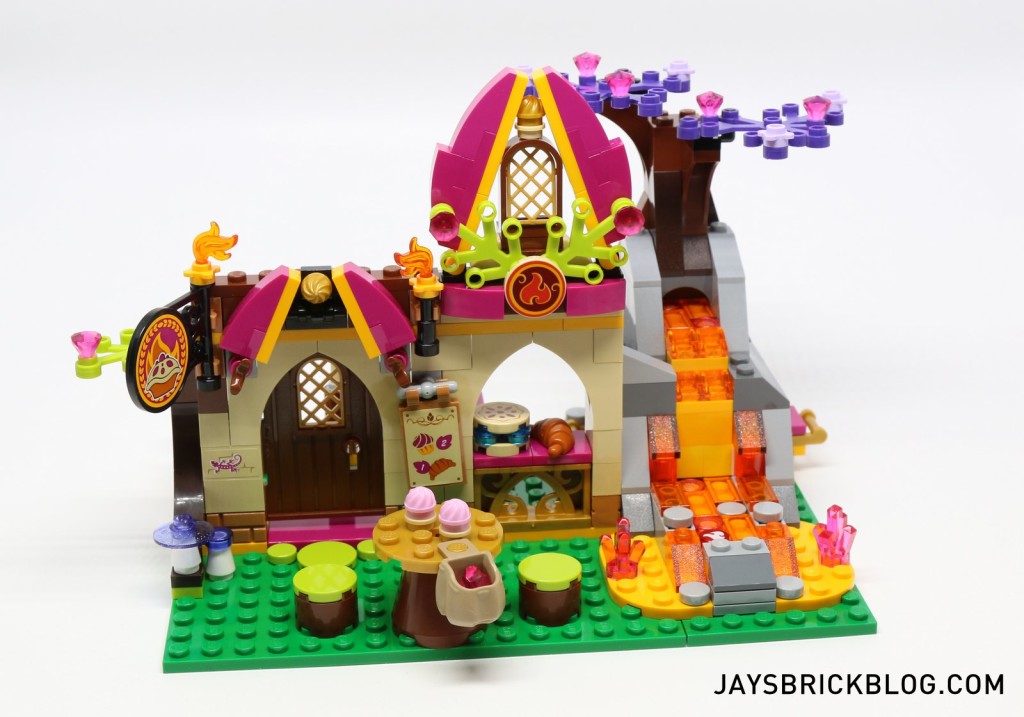 This is how the Magical Bakery looks like from the front. The entire model is made up of two distinct parts, the bakery itself and a lavafall that runs beside it. When you think about it from a fantasy point of view, the whole idea of a magical bakery that is powered by a lavafall is pretty darn clever.

Who needs a stone oven to bake your bread when you can harness the awesome power of molten lava??? 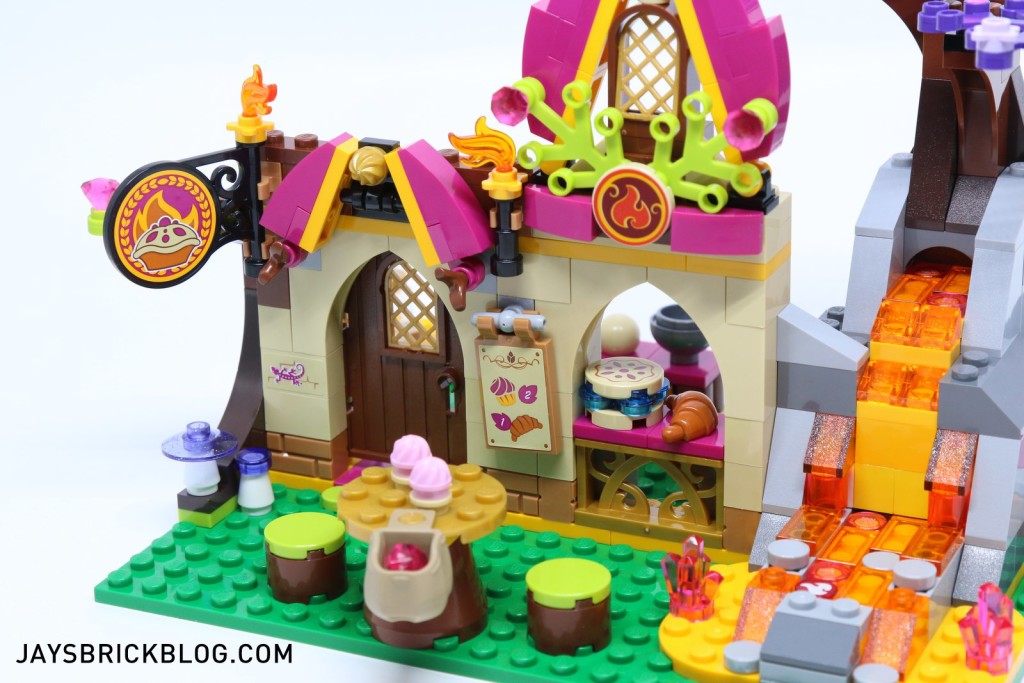 The bakery’s shopfront has plenty of cool details. There’s a small table for weary travelers to enjoy some baked goods or cupcakes which you can conveniently collect from the window. Plenty of stickers are used to add character to the bakery’s facade such as the brilliant “pie on fire” signboard, a menu and even a purple lizard next to the door.

I also really like the purple speckled mushrooms by the entrance. 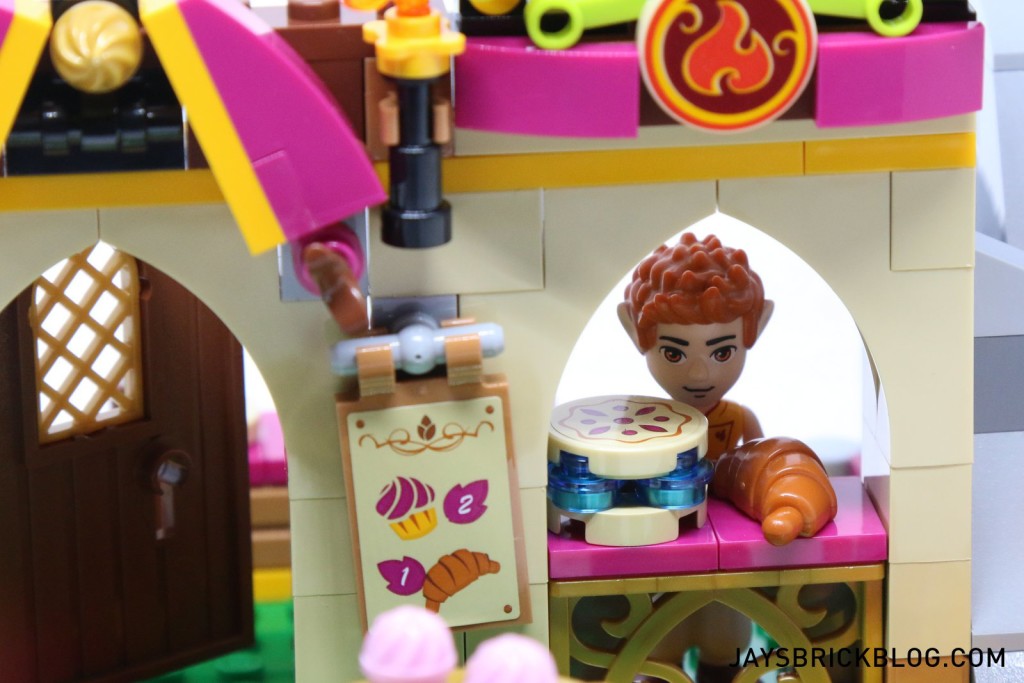 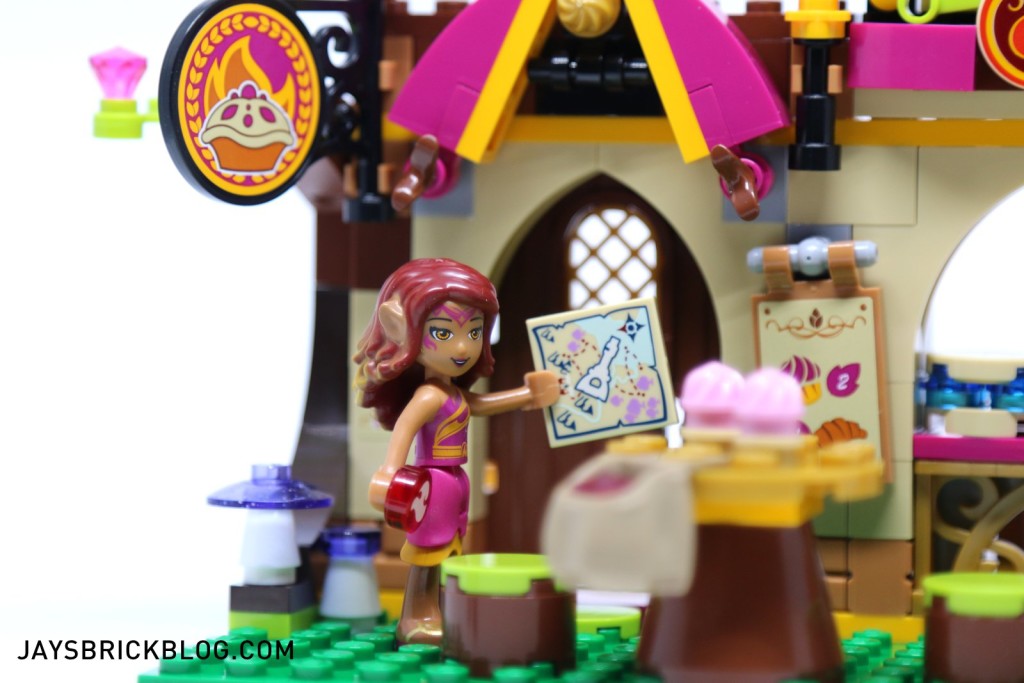 Here’s Azari with the printed map tile piece which has the silhouette of the magic key on it. 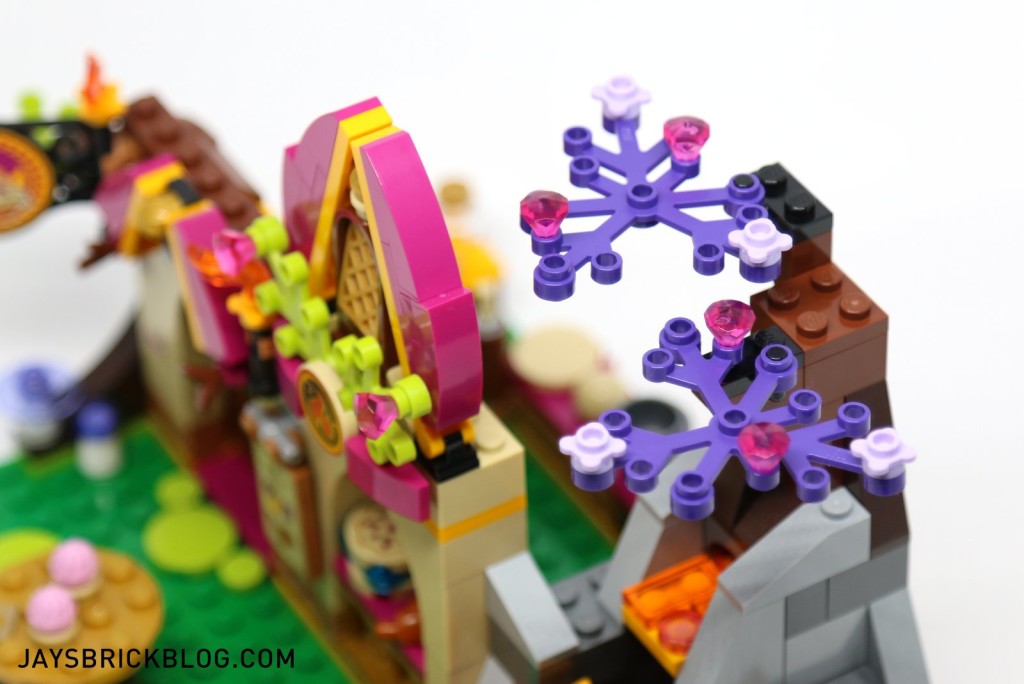 Like with all Elves sets, you can be guaranteed a plethora of interesting new coloured elements, such as these gorgeous purple leaves that sit above the lavafall. 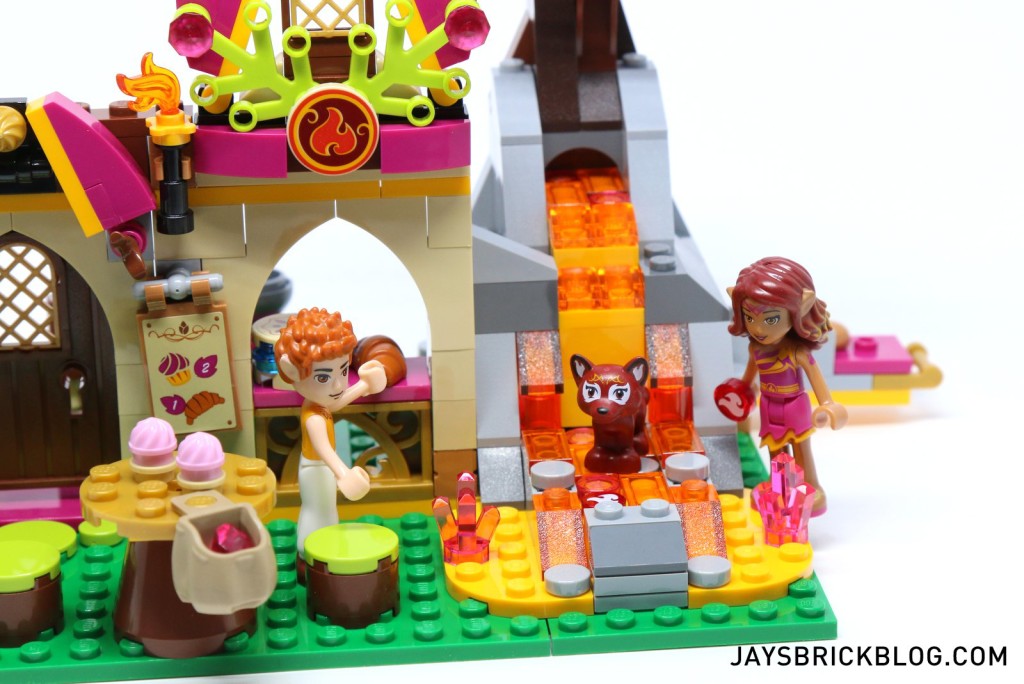 I really like the whole river of flaming lava thing going on. You get a decent selection of transparent orange elements, which contrast really well against the drab grey rocks. There’s a play feature baked into the lavafall that’s extremely well hidden.

By gently nudging the base in, you trigger the play feature which flips open a concealed chamber which holds the Fire Key. The play feature is quite satisfying to play with and has a really fluid movement to it. 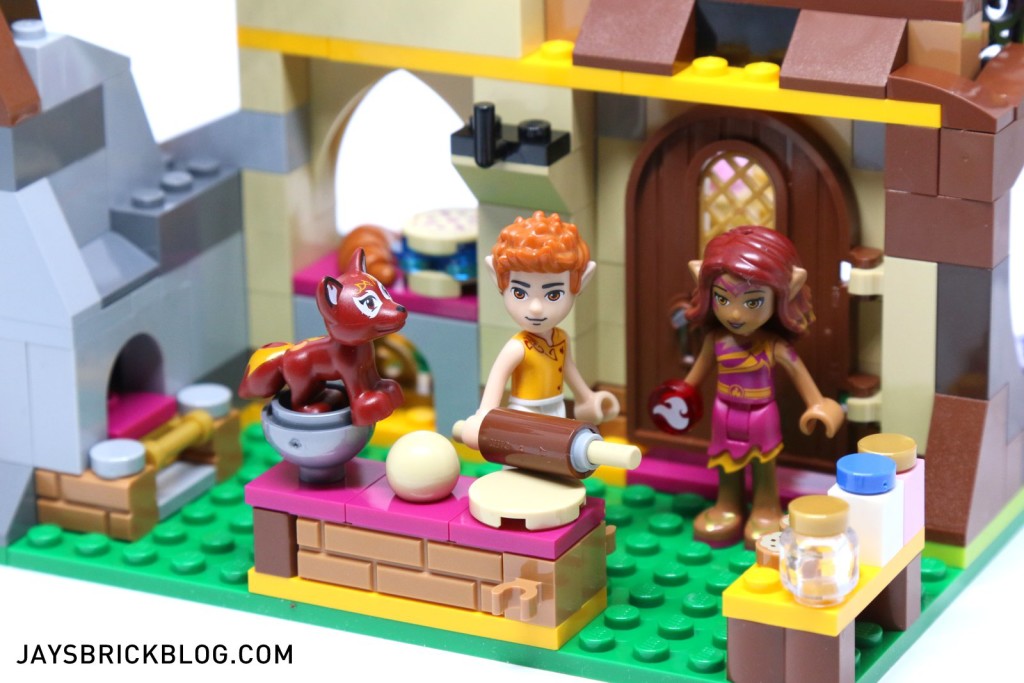 Flipping the set around, you get a better look at the bakery’s interior. It’s got an open air vibe about it and has several benches for Johnny to do his thing. His main workbench is where he works with his dough. I really liked the great use of tan elements as a ball of dough and a flattened lump of dough. Rolling pin included! 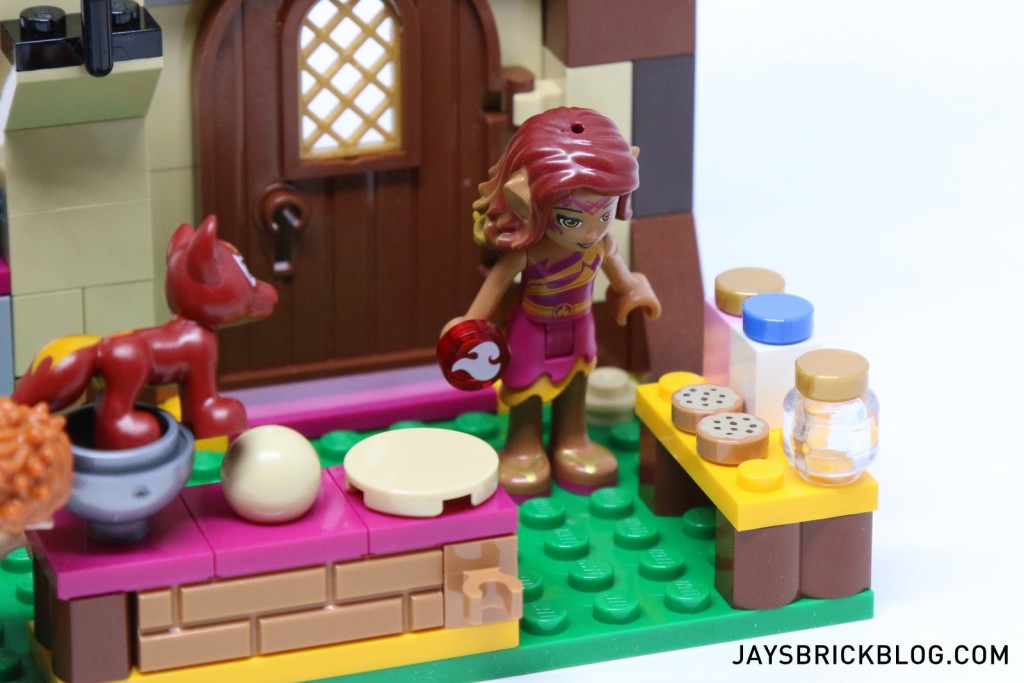 On the other bench, there are several jars of ingredients (yay for more transparent minifig heads!) and some cookies. 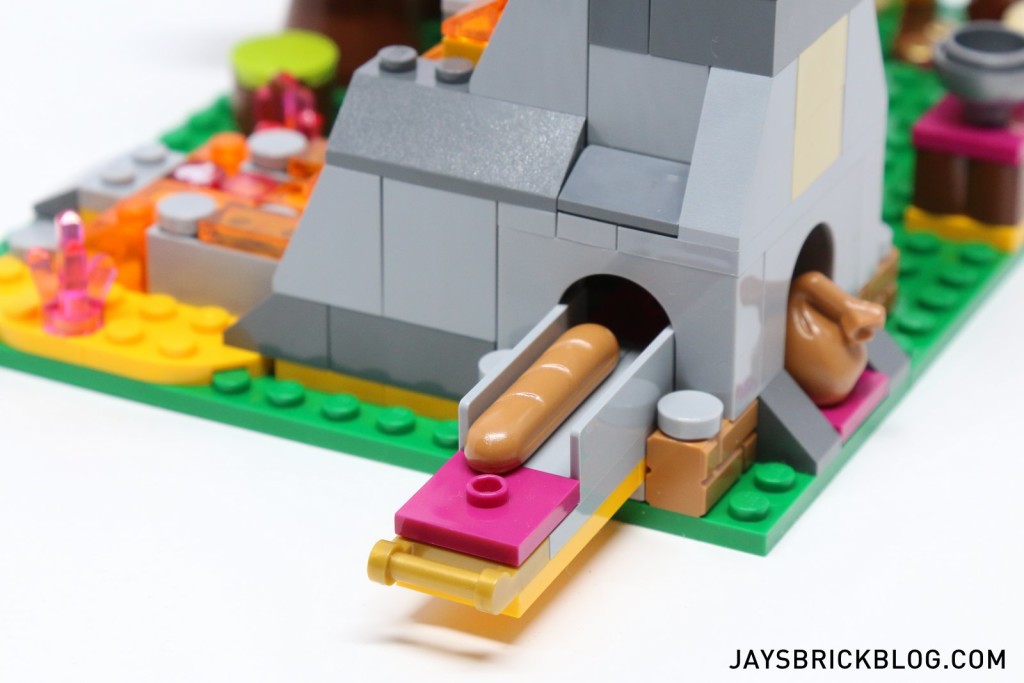 How does bread get baked you ask? Easy, just pop the dough onto a tray that slides into the heart of the lavafall and voila! You’ll get a beautiful baguette made in the heart of a magical fairy lava spring!

I have to say that the bakery interior was a bit of a letdown simply because it’s so sparse. The lava oven is cool but the two very minimalist benches don’t make the bakery feel substantial at all. Add to the fact that there are no walls to the bakery and you’re really only left with a skeletal looking structure. 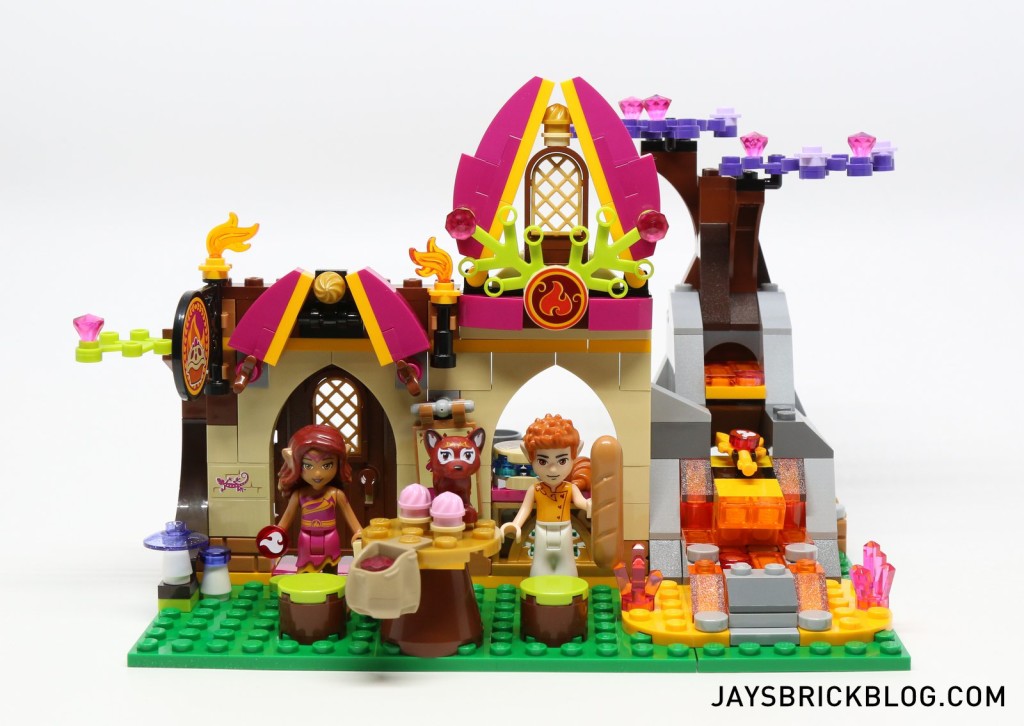 Final thoughts: After building and taking the time to properly get to know this set, I have to say that I walked away with mixed feelings. First, the positives. Azari and the Magical Bakery is an explosion of bright colours that have become the hallmark of the LEGO Elves theme. The designers have managed to blend the orange, green and magenta hues into a very cohesive and charming looking structure.

The Lava-powered bakery also has a sense of playful charm and imagination that is becoming quite rare in LEGO these days. I liked Johnny Baker more than Azari, simply because he’s the ‘star’ and exclusive minidoll of this set and Male minidolls are a bit of a endangered species. I would’ve loved it if they had fused his chef’s hat with his crop of flaming orange hair, but I don’t think LEGO is at the stage where they’re really to roll out head accessories plus hair on a commercial scale just yet.

From the front, the Magical Bakery looks like an excellent little Elves build, but when you turn it around, the interior leaves much to be desired. The lack of walls are a big pain point for me. I felt that LEGO could’ve also done so much more with the interiors to make it a lot more interesting. Either that or chuck way more bread or food elements into the set! The lack of a LEGO pie makes me seriously question the credentials of this establishment!

That said, the positives far outweigh the negatives! I quite enjoyed Azari and the Magical Bakery and if you’re a fan of Elves or outlandish Fantasy-themed sets, I’m sure that you would too. At the very least, if you have this set on display, you’ll be able to conceal most of this set’s weaknesses.

Do you own Azari and the Magical Bakery? Let me know your thoughts on this sets in the comments!