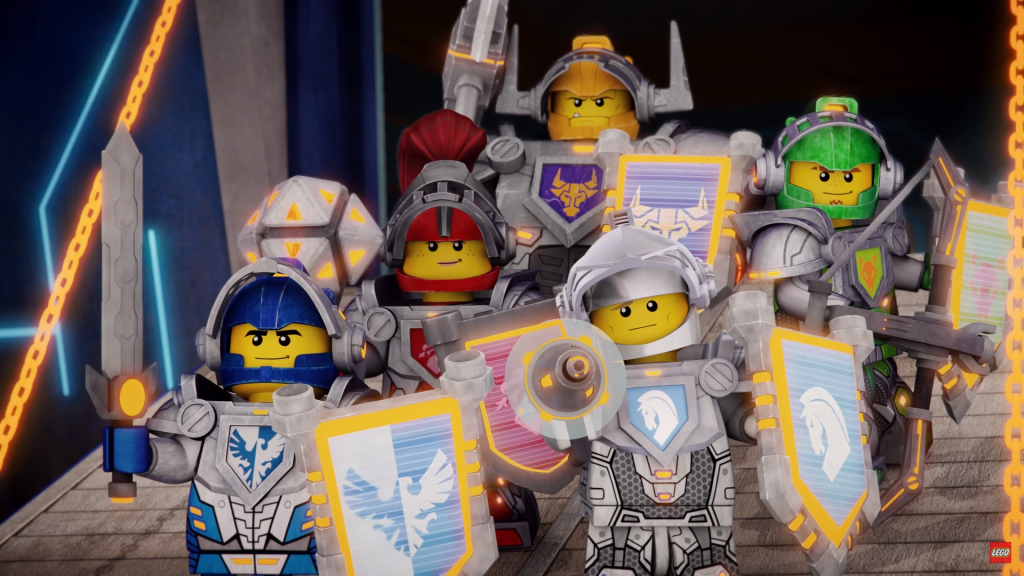 One of LEGO’s biggest new themes in 2016 is Nexo Knights, a bold mashup of futuristic technology and medieval knights!

Nexo Knight’s crazy unique designs and art direction that blends LEGO Castle with Space is quite a departure from anything LEGO have ever done, so this edition of What is…? will serve to introduce you to LEGO’s latest IP.

What is…? is a semi-regular series that aims to introduce new LEGO themes and sets as they’re about to be released in toy stores. My last What is…? post was about the fantastic LEGO City Arctic and Elves theme. By featuring some of the new and exciting new themes on the market, I hope to inspire you to explore and consider new LEGO sets that might traditionally be outside of your comfort zone.

LEGO have in the past dabbled with combining traditional LEGO sets with television content (Ninjago, Elves, Mixels) or interactivity with digital apps (Ultra Agents) but never before have all 3 “pillars” come together to create a unified and entirely new playing experience. 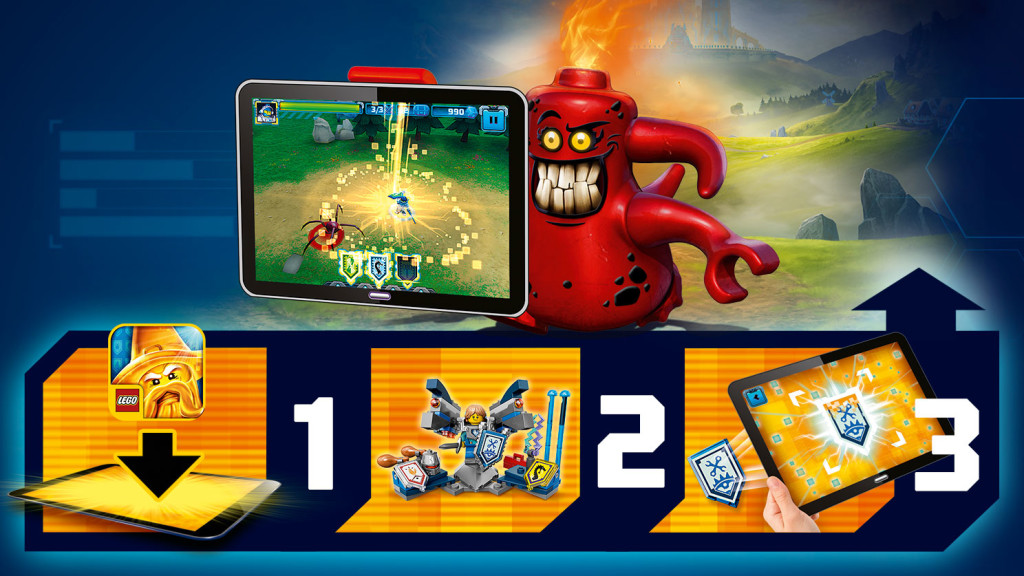 The glue that holds these 3 pillars together are scannable Nexo Shields which can be found in both digital and physical realms. Using the free Merlok 2.0 app (Downloadable on Google Play or iOS), fans can scan Nexo Shields found on TV, webisodes, the LEGO.com website, LEGO Club Magazine, and of course the actual physical Shields included in LEGO sets to unlock Nexo Powers that power up the game contained in the Merlok 2.0 app.

The cartoon episodes will be broadcast locally on Cartoon Network from 6th February 2016, weekends at 9am on Foxtel channel 713.

Nexo Knights is a pretty ballsy concept by LEGO to bridge the gap between digital gaming, physical play and entertainment in one cohesive offering. 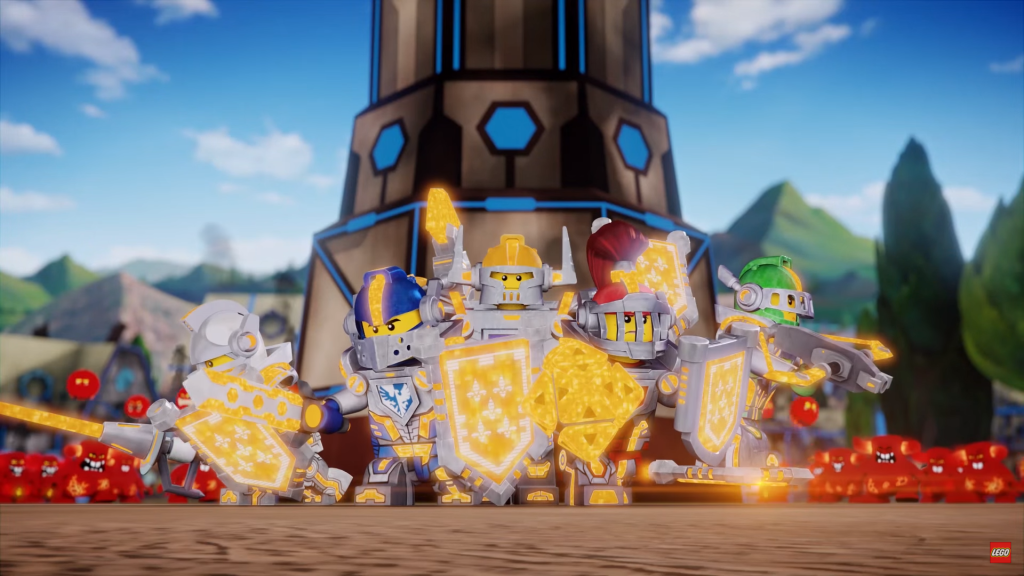 I’m guessing these are powered up Nexo Knights since their shields are all glowing with Nexo Power. 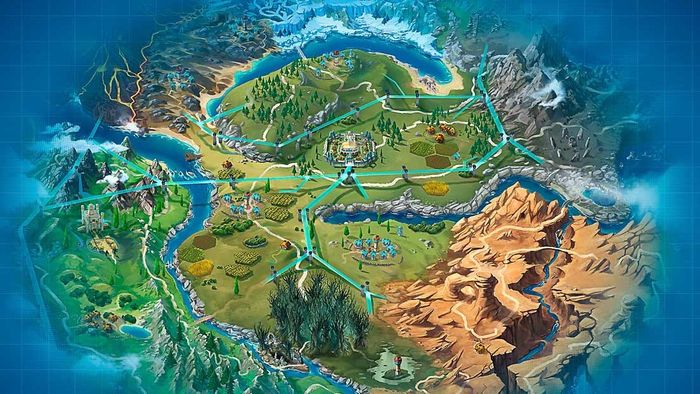 Map of the Kingdom of Knighton

Underpinning this entire theme is a rich story-driven setting that introduces a new world (Knighton), bad guys and most importantly 5 new protagonists. LEGO have learned a lot from Ninjago about the importance of introducing well-written characters, each with distinct personalities and appearances that allow children to form an attachment to, whether these characters appear on screen or in LEGO sets. 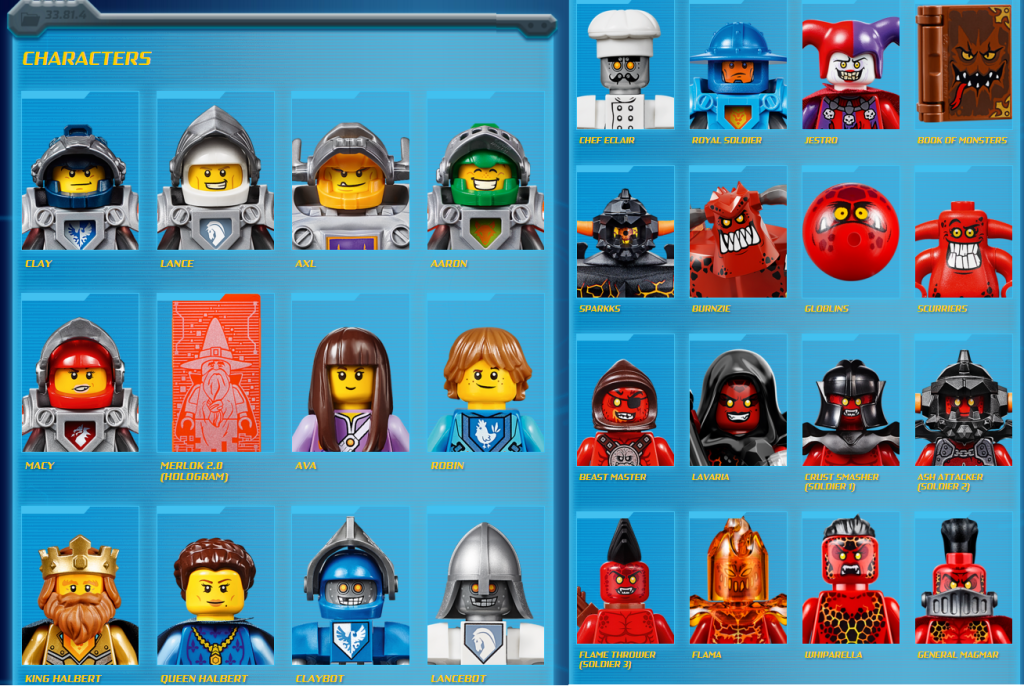 Here’s a snapshot of the characters from Nexo Knights. You can find out more about these guys on the LEGO.com website.

There are 5 main characters in LEGO’s Nexo Knights – Clay Moorington, Axl, Lance Richmond, Aaron Fox and Macy Halbert. Here’s a quick introduction to each of the main characters. 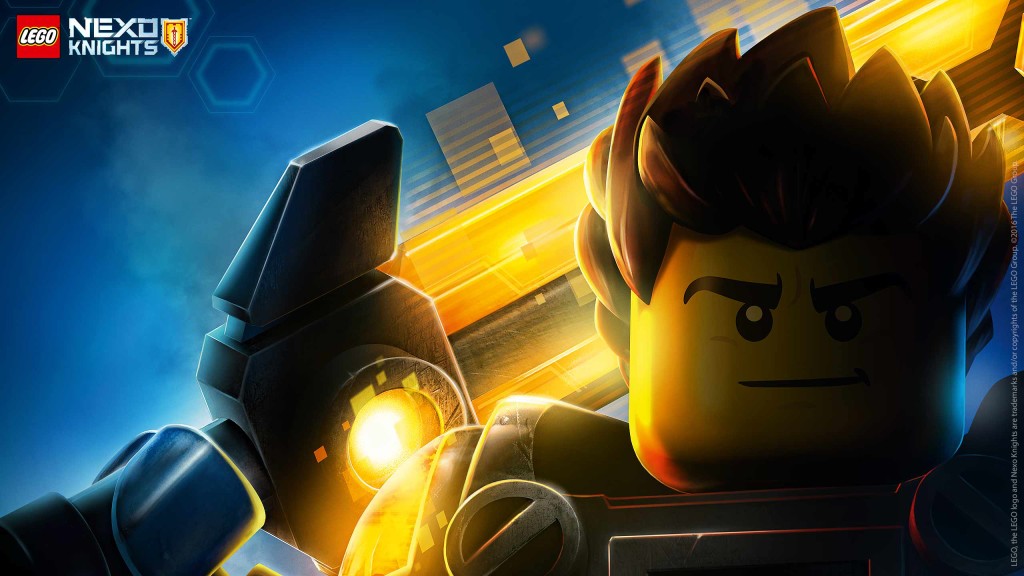 Clay Moorington wants so bad to be the Knight of Knights. He tries and works so hard to achieve this that it sometimes becomes a nuisance to his NEXO KNIGHTS™ fellows. He adheres to the Knights Code 100% and studies it 24/7. Clay is always the one to step up and lead the team into danger, work out new strategies and good weapons exercises. His very principled behavior often conflicts with Lances’ leisure focused lifestyle. His personal weapon is a giant Claymore sword which he can use one-handed. He is a farm boy, set out to study hard and prove himself. 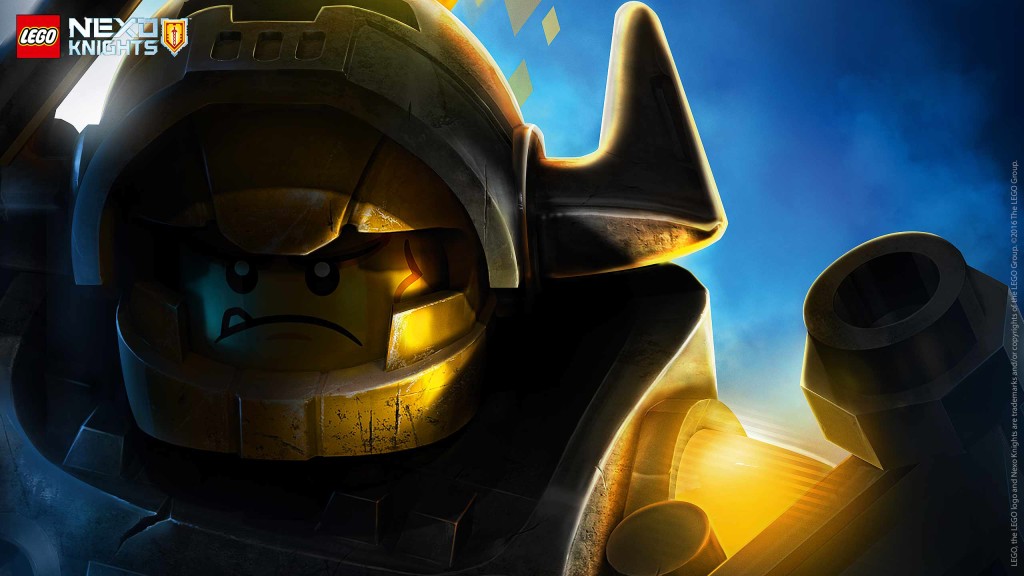 Axl is the gentle and ever hungry giant. Axl comes with a big heart and BIG muscles. He may look like the ultimate axe swinger and monster basher, but he would much rather dedicate his life to food and music. Maybe open a restaurant even, where he can cook and sing for his guests. Axl comes from the Hill Country from the mining city of Diggington where his family owns the Diggin’ Inn. There is no use for surnames in the Hill Country, so it is Axl, just Axl. 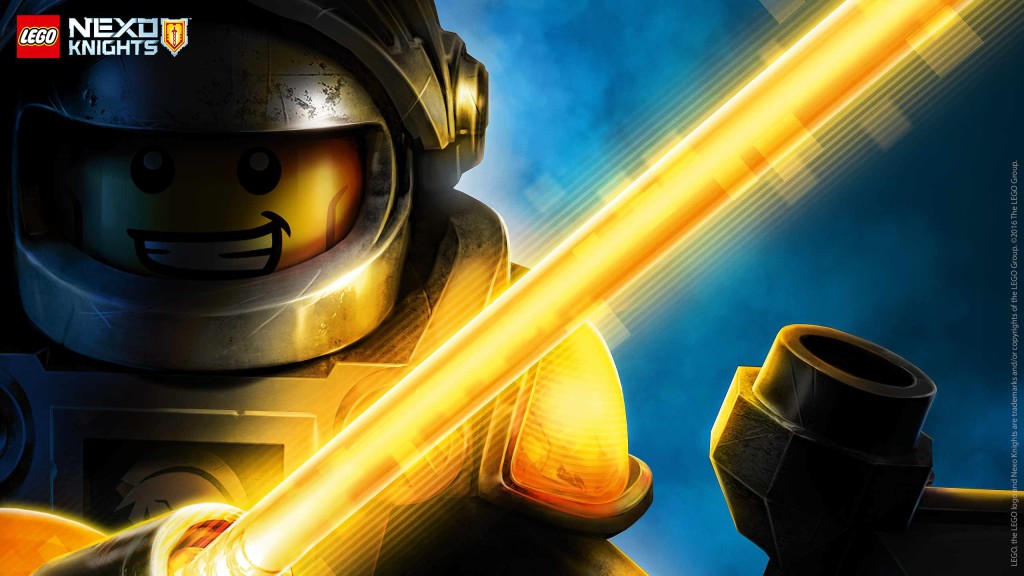 Lance Richmond is the celebrity knight. Son of the richest family in Knighton; The Richmonds from Aurumville. Everything comes easy for Lance, and that is probably a good thing because he doesn’t like to work much. Being part of a team tasked with the important mission of protecting the realm is a huge challenge for the spoiled knight. If Lance is not in a Jacuzzi or getting a massage from his personal squirebot Dennis, he is probably at the Knight Club spending the knight out. Lance’s solo personality often clashes with the super responsible Clay, whom we he will eventually learn to tolerate and admire. 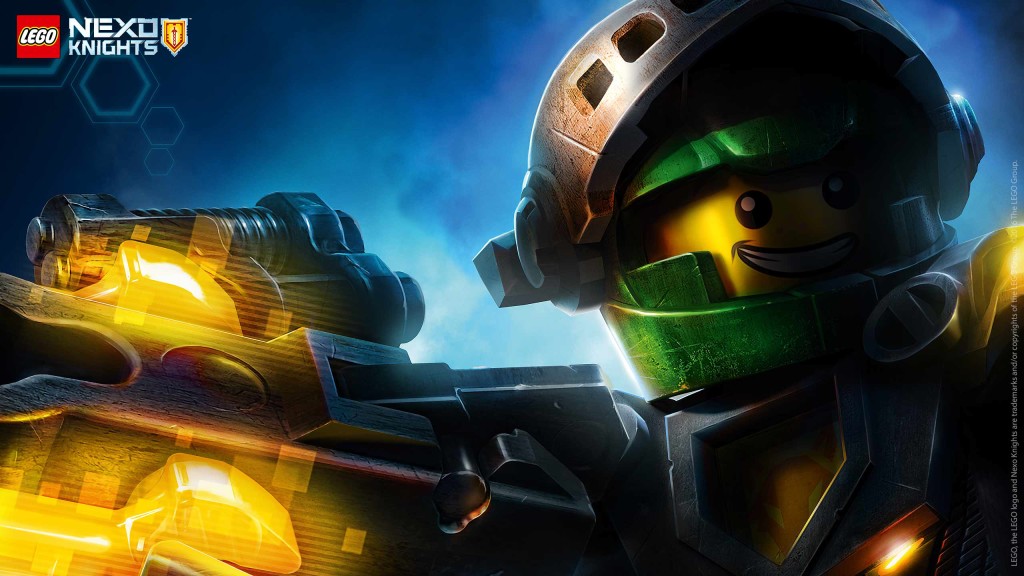 Aaron Fox is the team’s high flying adrenaline junkie, always looking for the chill of the thrill. Aaron’s inner daredevil sometimes makes it hard for him to act as a proper team member. At times, his reckless behavior puts both himself and the team at risk. But isn’t that what it’s all about? There are lessons to be learned by the young NEXO KNIGHT™ hero from the fishing village of Grindstead where he used to enjoy a carefree beach life. 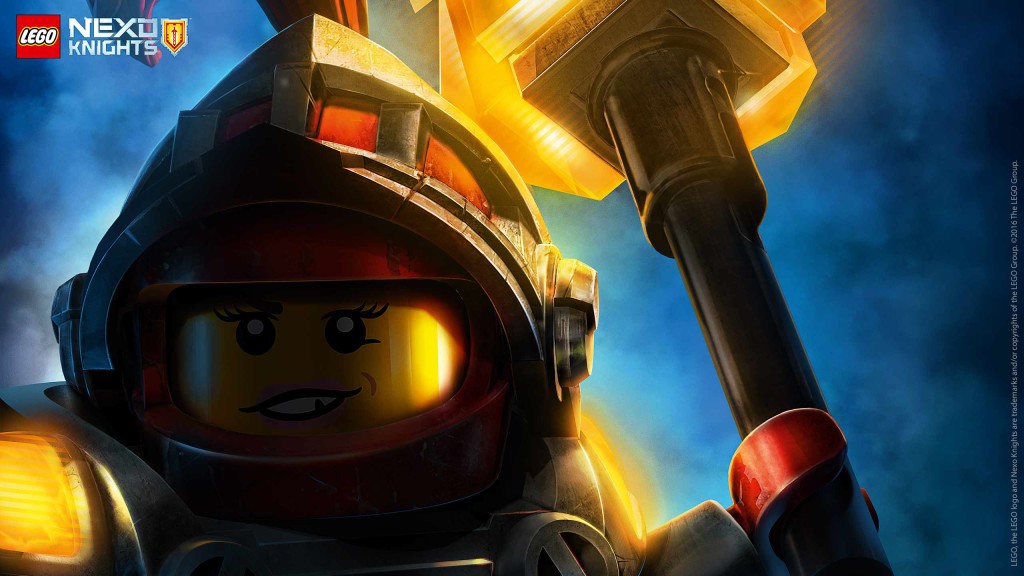 Macy Halbert is actually the Princess of Knighton. But don’t say that too loud. She is not the dress wearing kind. Rather the mace swinging and head bashing kind. And this fact is a great disappointment to her father, the King who much rather see her partaking in social events and inaugurating things. Just like himself, but no, Macy is like her mother; a brave warrior at heart and wants to become a knight. She graduated 2nd in her class, right after Clay and is now striving to earn her Knights shield which her father won’t give her. 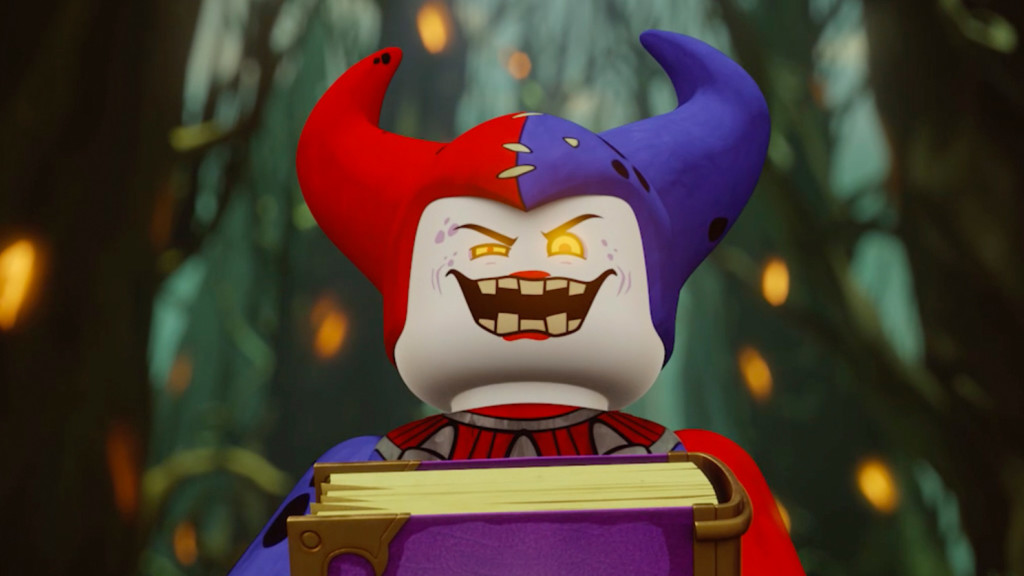 The five brave knights’ main adversary is Jestro the Jester. Jestro hasn’t figured out yet what he is good at. To be honest; he was an awful knight at the Academy, and changing into a jester didn’t make it much better. Well, he is good at making really BAD career choices. The Book of Monsters had no trouble convincing him he was great at being EVIL. Especially after helping the Book get out of his secure prison in Merlok’s Library. So now Jestro is trying hard to be Jestro the Evil jester spreading monsters and havoc across Knighton. He is searching for the 11 books of old Dark Magic and feeds them to the Book of Monster, thus increasing the power of his new army of monsters. He is finally getting back at those who laughed at him, even his old NEXO KNIGHTS™ friends. It feels good, but how long will it last?’ 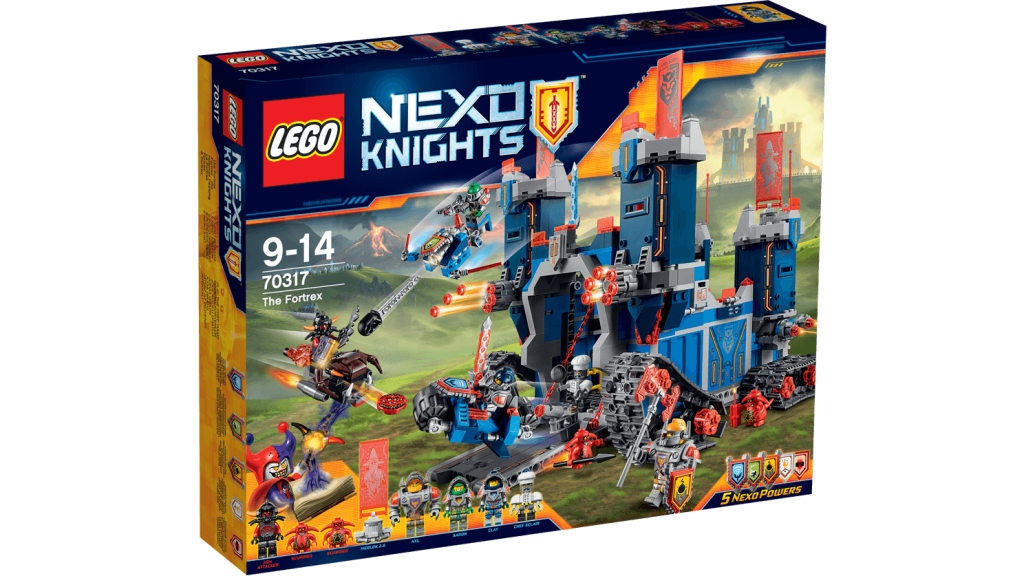 You may be wondering…. yeah, yeah, cartoon characters are fun and all… for 9 year olds. What’s in it for me, the adult LEGO fan who doesn’t care about apps and TV shows?

There are 16 sets in the first wave of Nexo Knights, which is a pretty massive offering from LEGO.

They’re quite competitively priced (since they don’t suffer from the license tax like Star Wars or Super Heroes) but have been quite a point of contention for (mostly) adult LEGO fans. 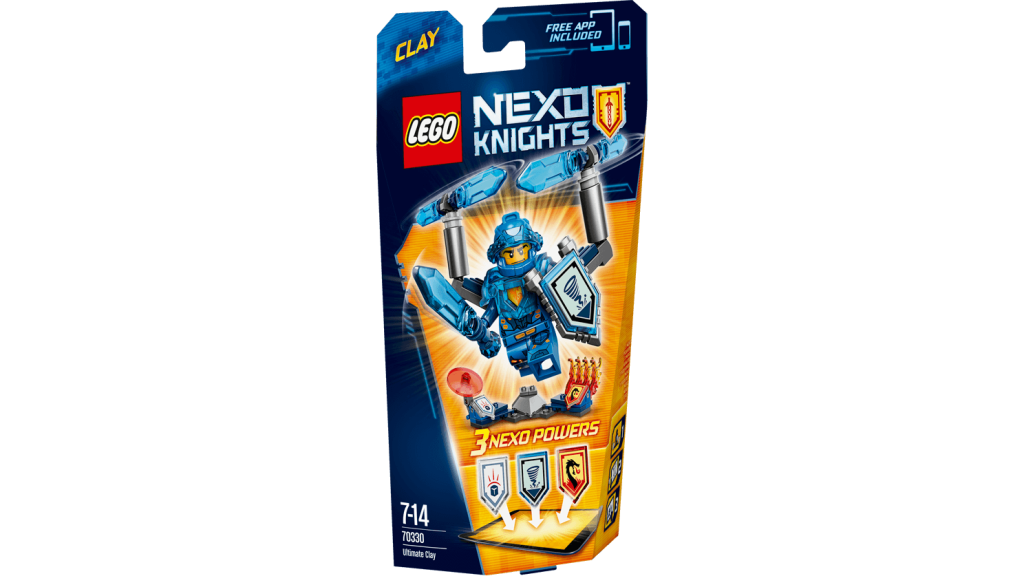 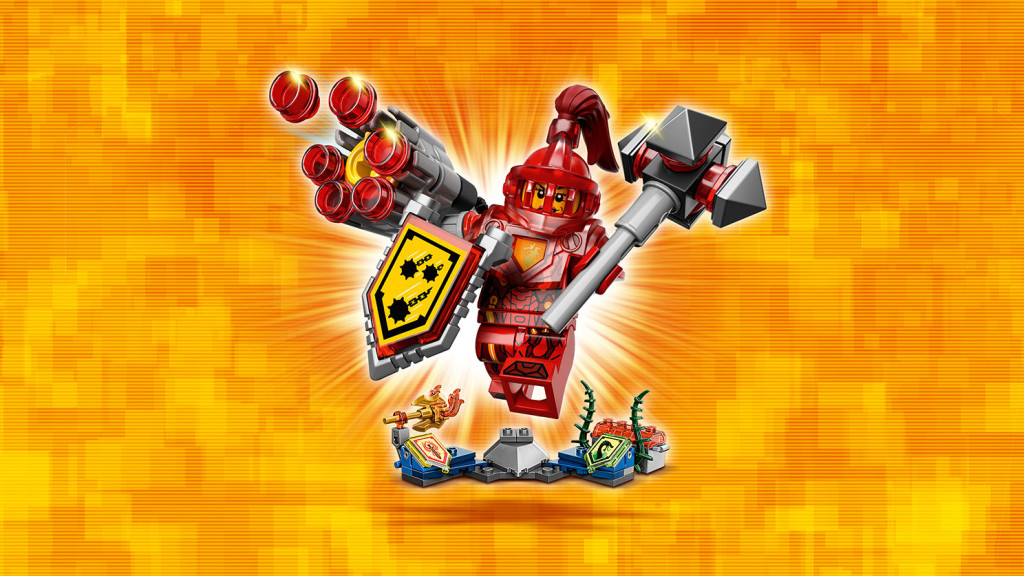 Just like Ninjago, with the smaller spinner sets, Nexo Knights also features a selection of Ultimate Sets, featuring some of the major characters from the theme. Think of these as souped up character/minifig packs where you receive a powered up Nexo Knight, some gear, plenty of weaponry and of course a bunch of Nexo Shields that are exclusive to the Ultimate sets.

These Ultimate sets are AU$15.99 and there are 6 of them to collect with the first wave of early 2016 Nexo Knights. 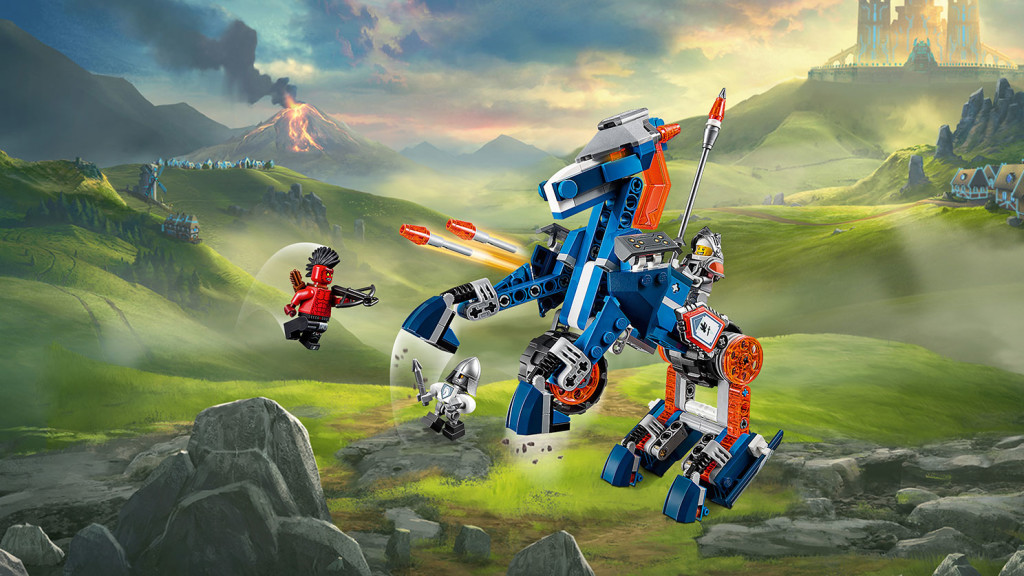 I do concede that the sets are a little outlandish, but what were you expecting from a theme that blends traditional Knights & Castles with futuristic technology? What I can’t really stand is adult LEGO fans complaining about sets that are clearly not targeted at them. 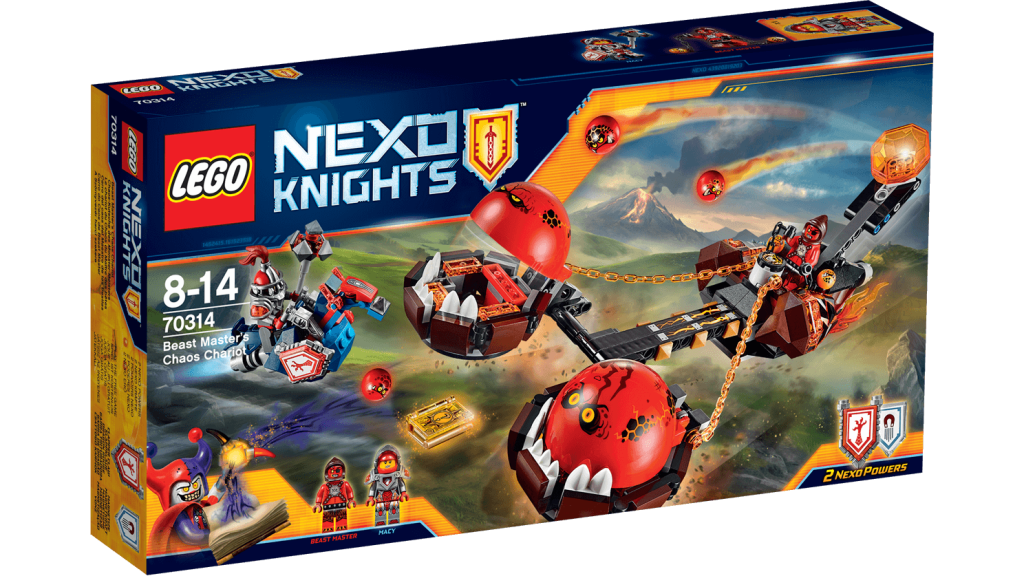 Some of the LEGO Nexo Knights sets look like plenty of good-natured fun and I’m willing to bet that kids are going to be excited as hell about them. Sure, some of the designs might be a little garish and loud, but for the most part, they’re pretty imaginative and bold. Like nothing we’ve ever seen before from LEGO. 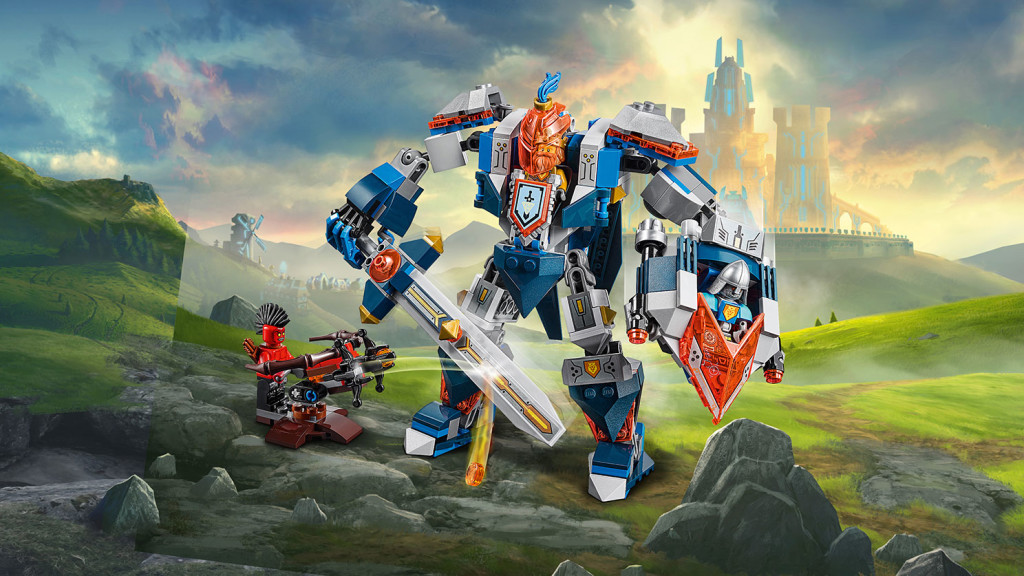 Do I like the theme? Not really, as it’s really not my style since I’m more of a Super Heroes, Friends and Creator kind of person although I will inevitably buy some of the sets to review and to satiate my curiosity about the theme.

High on my list is 70327 The King’s Mech which looks bloody brilliant since it’s a giant Knight Mecha. The King’s Mech is a bit of an oddity since (at the time of writing) it’s only been available on LEGO.com. I’ve been informed by LEGO that The King’s Mech is a Big W retailer exclusive here in Australia, although I haven’t seen it on shelves yet.

You can’t deny that there are some really interesting new parts and elements, which of course would be the biggest draw to adult LEGO fans. I personally think that the minifigs are incredibly well designed, and come with some fantastic new accessories that would be very useful for those that like to customise their LEGO minifigures. 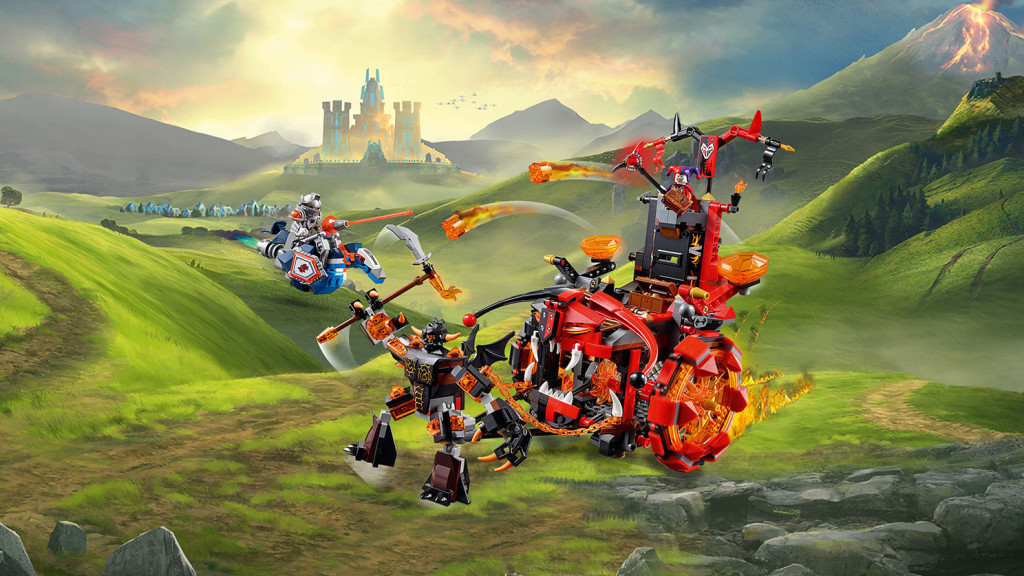 I am incredibly interested to see how well Nexo Knights performs in the market. LEGO have poured plenty of resources into getting this theme off the ground, and will definitely go hard to ensure that it becomes a success.

Senior design manager Joakim Kørner Nielsen was quoted in a Fast Company feature  as saying “When we launch something this big we want to make sure that we have something that is appealing on all the levels and aspects that it’s supposed to be for the kids in the right target group. We’ve done a lot of sketch models, mood boards, concept drawings, that we’ve travelled around the world with them, testing and making sure kids around the world got the point, got the key messages of the story and things like that. There’s a lot of concept work like that that goes into it before you’re actually able to execute the vision, and building the final models.”

I think Nexo Knights definitely has potential to succeed, but is going up against strong competition from other established and conflict-heavy themes such as Super Heroes, Ninjago and of course Star Wars. Launching a brand new IP is always a gamble but if LEGO manage to come close to what they’ve achieved with Ninjago – they will be on to another winner and most importantly, money spinner.

Expect some Nexo Knights reviews soon-ish. I’m just waiting for a decent sale to pick some of these sets up and of course keeping an eye out for The King’s Mech to show up at Big W!

So, what do you think about Nexo Knights? Take the poll below or let me know in the comments if you think this is going to be LEGO’s next smash hit or an ultimate flop!