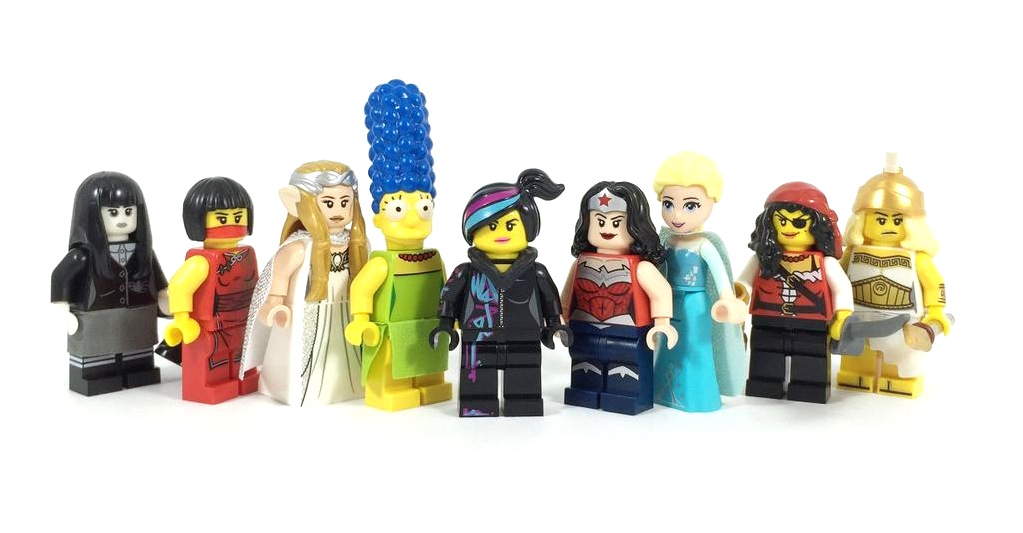 Today, the world observes International Women’s Day, a global day celebrating the social, economic, cultural and political achievements of women as well as marking a call to action to accelerate gender parity.

Gender equality and parity is something that’s personally quite important to me, mostly because I’m raising a little girl, who I hope will be able to grow up in a world where her gender will not stand in the way of what she wants to achieve.

LEGO and Gender Equality on the other hand, has been a lot on my mind since the announcement of the LEGO Ideas Women for NASA set. My post certainly struck some kind of chord within the community, and my comments were picked up in a couple of news sites such as the BBC and went kinda crazy on social media as well.

It was very eye-opening, nonetheless to see such open hostility from a very vocal minority of the LEGO fan community, whom I had (wrongly) assumed were much more tolerant and mature. Turns out I was wrong and there are some really backwards-ass views still prevalent in the community.

Which got me thinking about minifigure gender equality within LEGO, as well as what LEGO has been doing to close the gender gap. The lack of female minifigures in LEGO sets has been a known issue within the hobby, but lately, I’ve felt like I’ve been seeing a lot more female minifigs in sets.

I was pretty curious so I decided to crunch some numbers yesterday on female minifigure representation in the last 3 years, to see if there was a trend.

I was also heavily inspired by one of the seminal articles on LEGO’s girl problem by Nick from FBTB in 2014.

Using Brickset’s database, I took a look at 4 themes (City, Star Wars, Super Heroes (lumped Marvel, DC, LEGO Batman Movie together) and Friends to determine the extent of female representation in sets from 2014 to 2017. I didn’t include polybags, exclusive promos or even Combo Pack in this data set.

My hypothesis was that LEGO has been making strides in balancing up the genders in certain themes, but we aren’t quite there yet when it comes to gender parity.

Here’s what I found. I hope you like poring data and graphs! 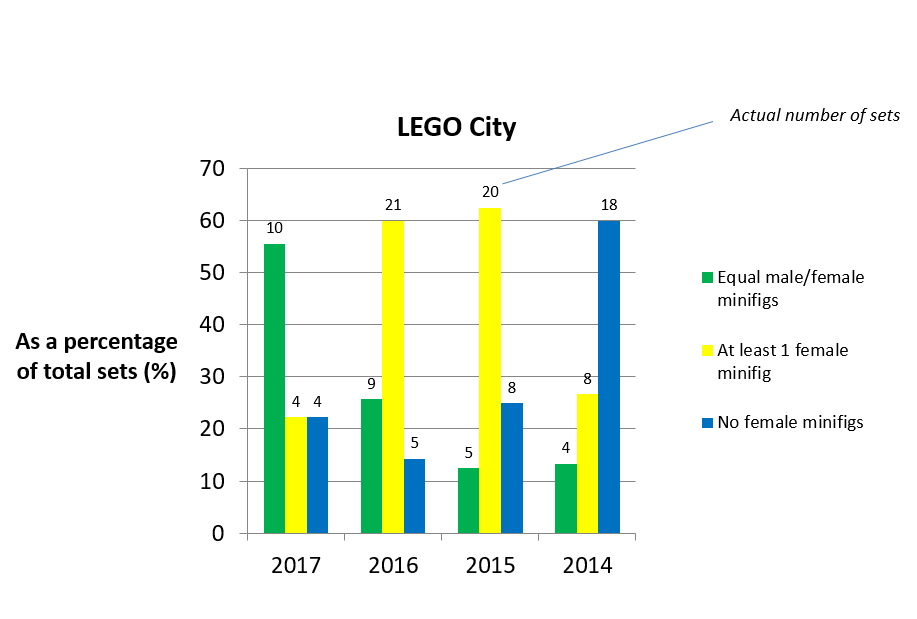 City is one of LEGO’s bread and butter themes, accounting for the majority of its sales throughout the world and is arguably, one of LEGO’s most important themes in its lineup.

The data tells an interesting story. As you can see above, 2014 was a pretty bad year for gender parity, with 60% of LEGO City sets not containing a single female minifigure and only 13% of sets (4 in total) having an equal number of male and female minifigures.

Note: I’ve used percentage of total sets due to the fact that 2017’s lineup hasn’t been fully released yet, so the data pool is considerably smaller. 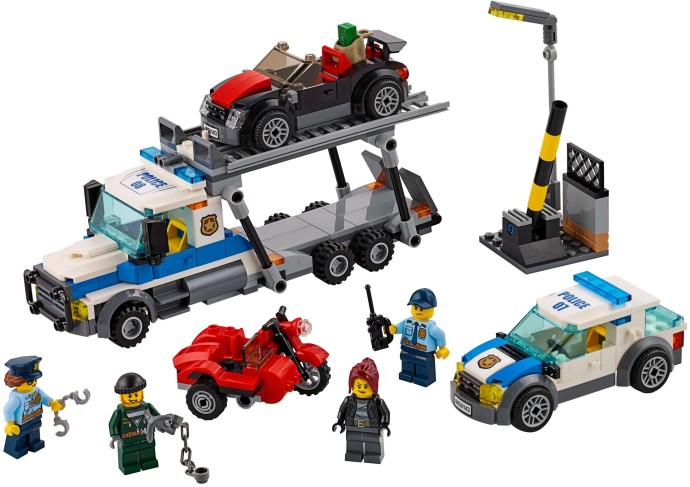 Things began to shift in 2015 onwards, which is coincidentally after the Research Institute generated headlines worldwide (2014) and cast a spotlight on the lack of female representation in LEGO sets. You can see that in 2015, there was a dramatic increase in sets that included at least 1 female minifigure, although the number of sets with 1:1 males to females increase slightly to 5 sets.

In 2016, we see that the number of sets with equal males and females almost double, making up 25% of all City sets. 2017 isn’t over yet, but it has so far represented the biggest shift yet, with a whopping 56% of sets containing an equal number of male and female minifigures, confirming my suspicions. 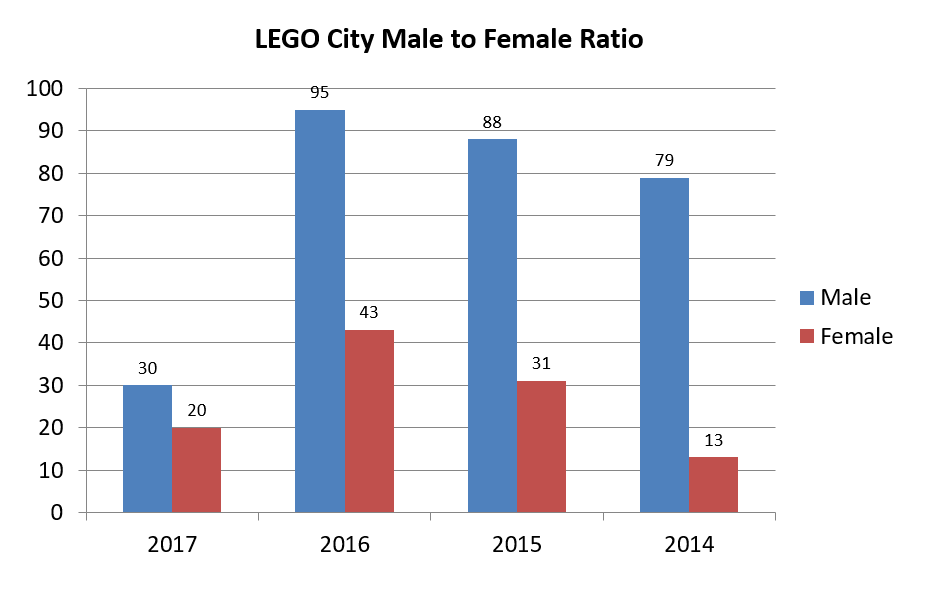 Looking at the total population of male and female minifigures throughout the year, there’s a really encouraging trend where we’re seeing a lot more female minifigures included but we’re nowhere near complete parity, and I imagine that we’ll never really get there since LEGO City sets have traditionally been targeted at boys.

That said, it’s still a very encouraging trend and it does show that LEGO is making a conscious effort to include more female minfigs in sets, so kudos to them for taking feedback on board and acting on it without making much of a fuss about it in the media.

While City may point towards a more equal trend, unfortunately, the same can’t be said for other major themes. 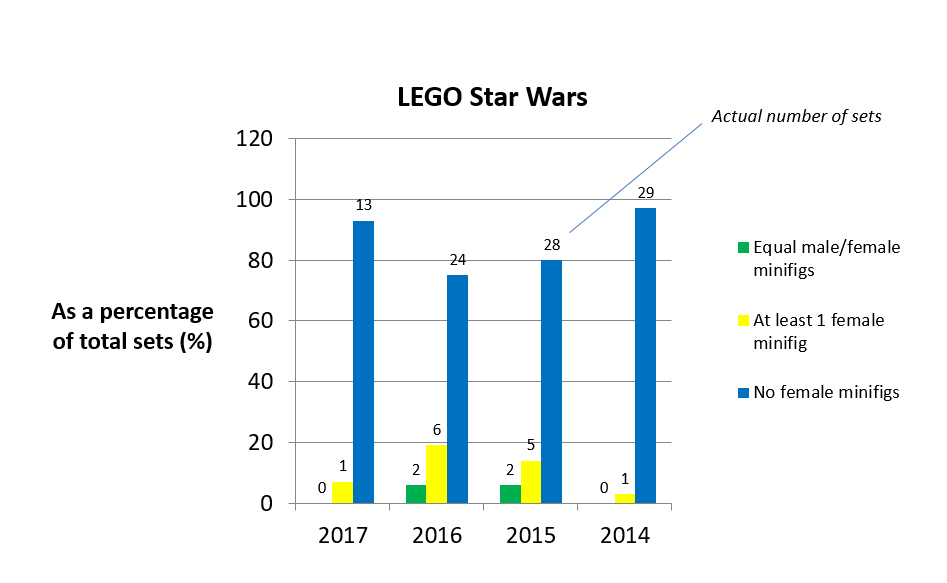 Star Wars, another one of LEGO’s most important themes is not a theme that you’d look at for gender equality. Female minifig representation in Star Wars sets is just horrible, with only a slighty notable uptick in sets with female minifigures in 2015 and 2016, mostly due to there being a lot more female characters in The Force and Rogue One. 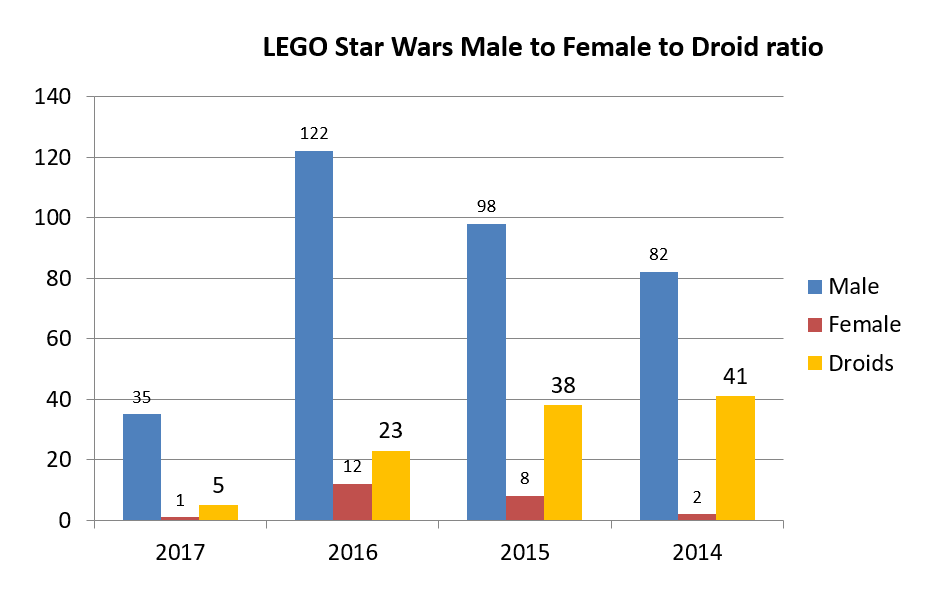 It’s also interesting to note that there are way more Droids than female minifigures in Star Wars sets, which will come as no surprise for anyone that’s familiar with the movies and cartoons that the theme is based on.

Now, I don’t believe that this is LEGO’s fault. It’s a licensed property and as such, the set designers are limited by the source material, which for all intents and purposes doesn’t do the best job with equal gender representation.

This has changed recently given the prominence of main characters such as Rey and Jyn Erso, but licensed properties, especially blockbusters are widely acknowledged to be quite poor when it comes to placing women on equal footing. 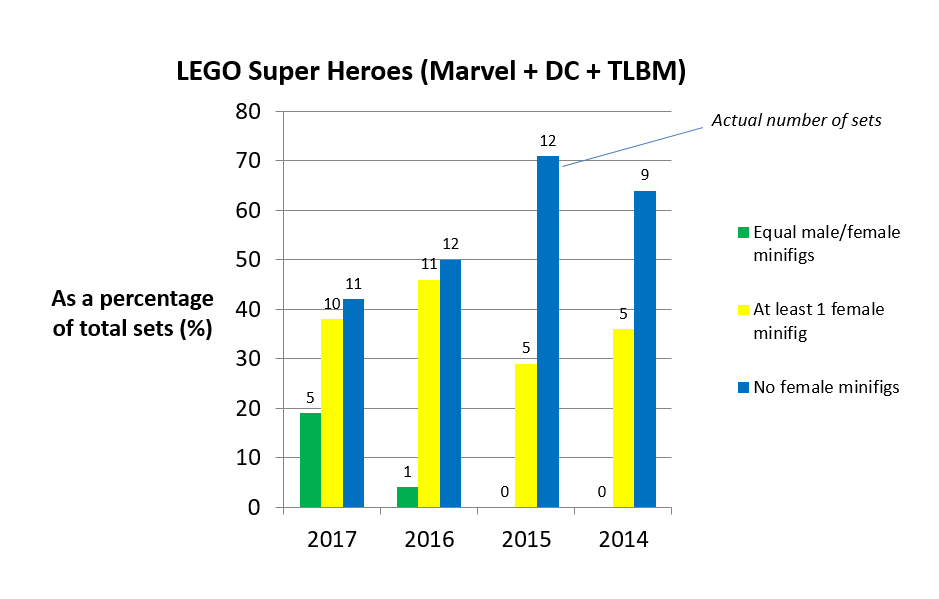 This trend is also slightly less pronounced with the LEGO Super Heroes theme. 2015 and 2014 have been mostly male-dominated, but it appears that the gap is starting to close in 2016 and 2017.

Super Heroes doesn’t suffer as much as Star Wars from the lack of female characters, mostly because Marvel and DC does a pretty decent job of elevating female characters in their stories, which is pretty encouraging since there is a perception that comic books are a men-only club. 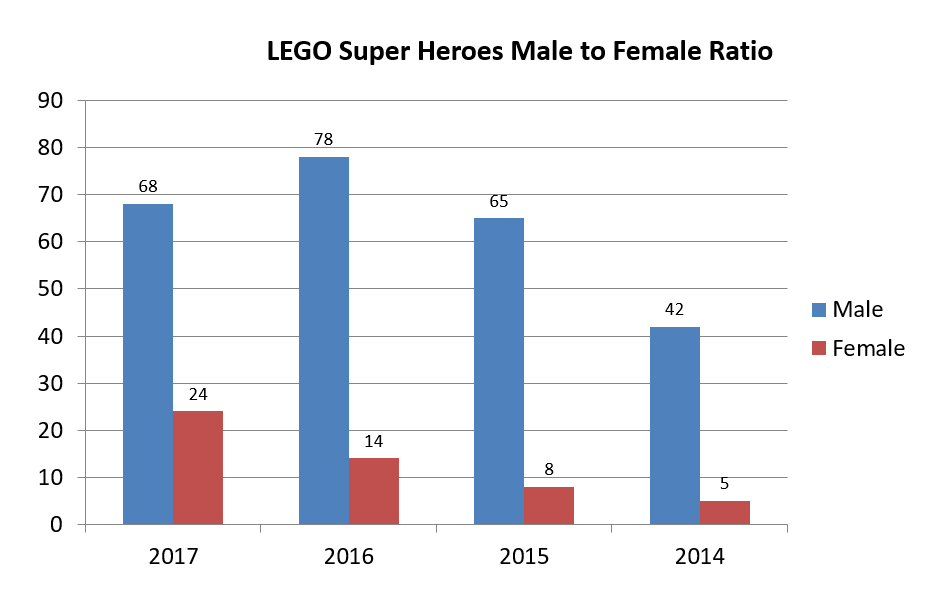 That said, females minifigures are still a rarity within the LEGO Super Heroes theme, so even though most sets have at least 1 female character, they’re still greatly outnumbered by their male counterparts.

This has of course led to themes like DC Super Hero Girls, a big merchandising push to get girls interested in Super Heroes. DC has a bit of an upper-hand since I believe that they have much stronger female characters such as Wonder Woman, Super Girl and Harley Quinn as opposed to Marvel.

Hopefully that’ll change when Captain Marvel rolls around, but DC is definitely in the lead when it comes to raising the profile of their female super heroes. 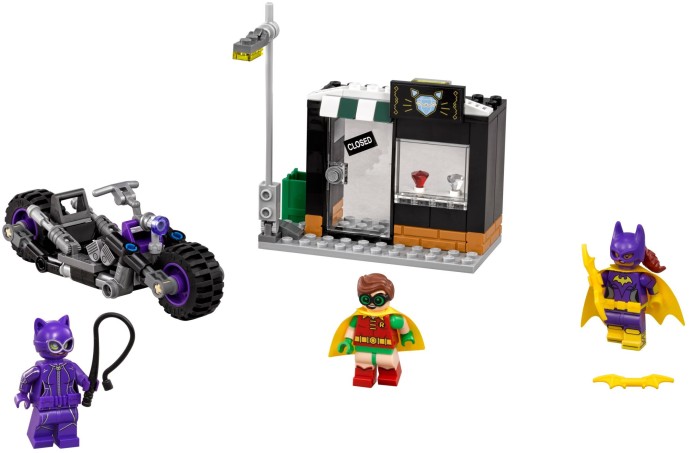 Interestingly enough, The LEGO Batman Movie sets have been outstanding when it comes to inclusion of female characters.

Out of all the sets that I looked at for this piece of research, the only TWO sets where females outnumbered males were from this theme with 70902 Catwoman Catcycle Chase and 70906 Joker Notorious Lowrider which was pretty interesting. 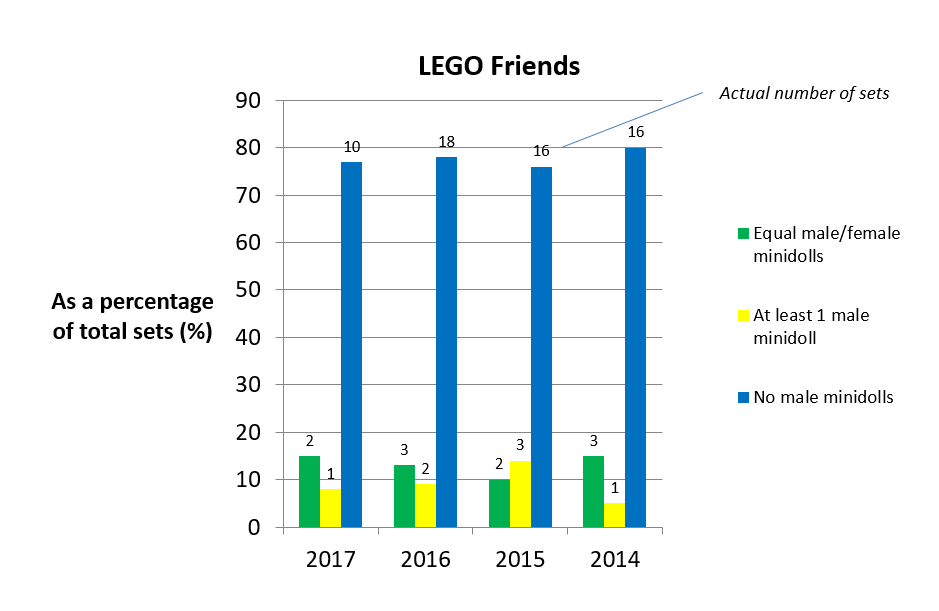 This post is mostly about female representation in LEGO sets, but I was also interested in the flipside – which is LEGO Friends and how gender diversity is handled in the theme.

City, Star Wars and Super Heroes for the most part are aimed at young boys so it does make a lot of sense from a product perspective to have more male minifigures. Friends is aimed at young girls, and is a theme that I personally like and collect, and while I do love the minidoll aesthetics, I really dislike that there aren’t a lot of male minidolls in sets. 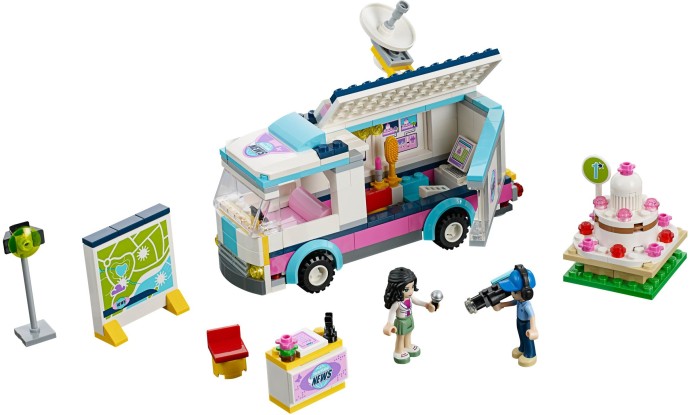 It’s gotten to a point that I’ve made a conscious effort to purchase male minidolls every time I see them listed on Buy Sell Swap Pages purely because they’re so rare. 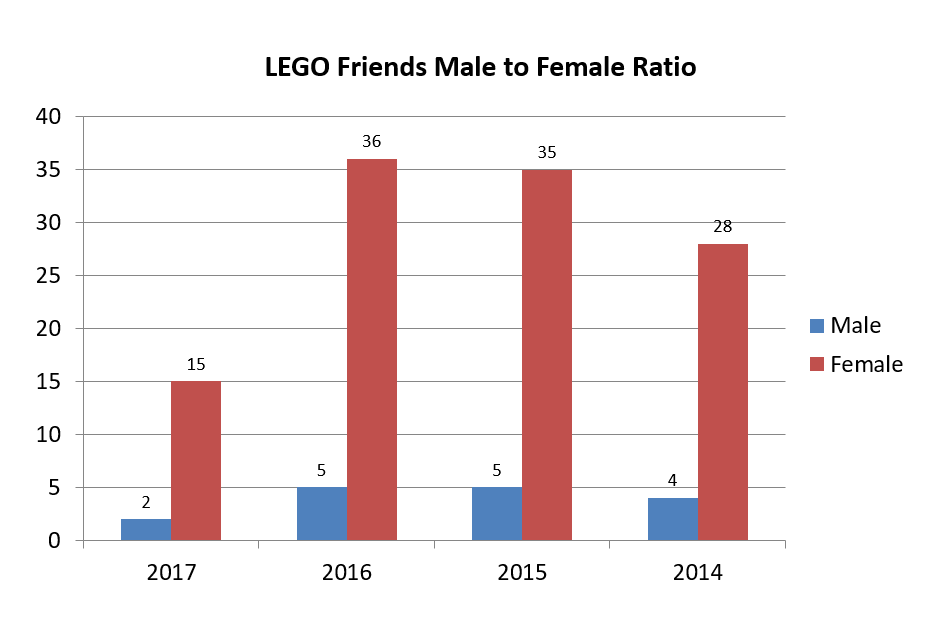 This shouldn’t be a surprise to anyone, but it’s eerie how similar this graph is to the Super Heroes/Star Wars one, just flipped around because it’s Heartlake City.

So yeah, I hope this has been as illuminating to you as it has been to me! We can clearly see that LEGO have come a long way in terms of including more female minifigures in their sets.

The theme that has made the most progress has been City, and given that it’s THE flagship theme for LEGO, it’s great that they’ve been addressing the lack of female minifigures, slowly but surely. 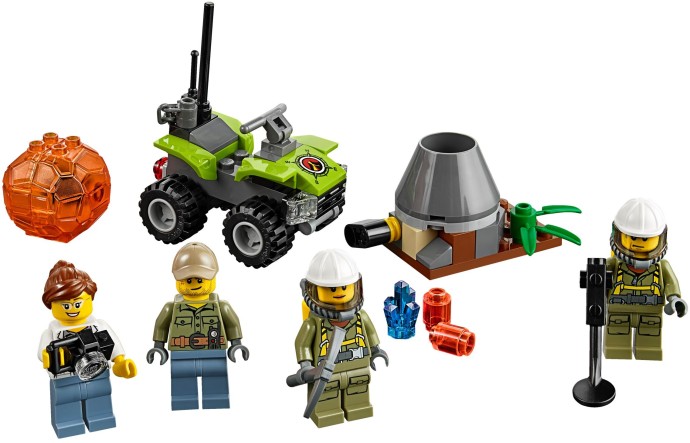 With LEGO, I think the overall goal win for the brand is to not just blindly aim towards minifig gender parity, because hey, we’re talking about inanimate toys here. The main prize is of course, raising the profile of female minifigures and using the iconic form factor to highlight women in non-traditional gendered roles.

Which is why I’m particularly excited about the Women of NASA set. 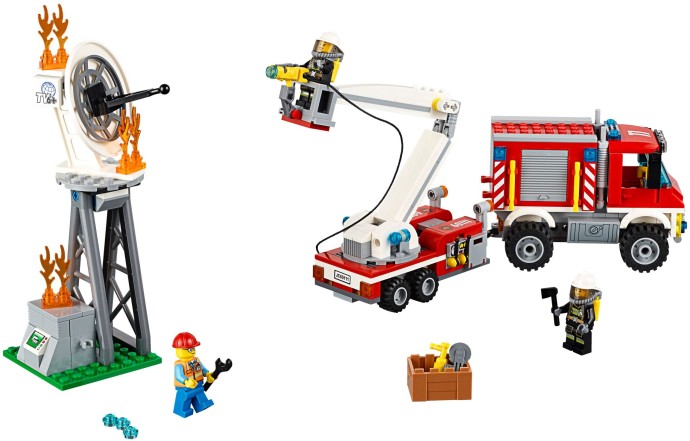 Recent LEGO City sets have been stellar at this, placing women into dangerous occupations such as Firefighters and Volcano Explorers. And funnily enough, as criminals on the run from the cops.

It’s meaningful gesture like these, where LEGO is clearly sending a message that female minifigs can do the same things that male minifigs can do, combined with increased representation in sets will go a long way in sending a positive message not just to girls, but to boys as well and ultimately affect meaningful change in the world.

I’d love this to of course to extend to other themes as well, and it’s encouraging to see more equitable features in The LEGO Batman Movie, so here’s hoping we see diversity being championed a lot more in LEGO sets. And LEGO, please include more male minidolls in Friends sets too!

In closing, because I bet that some people are going to be upset about this, I have this to say:

This is clearly a direction that The LEGO Group is consciously heading towards, and the sooner you embrace this, the faster we can progress as a fan community. Also, if this upsets you, you (quoting Juanita Phillips) really need to reflect on why.

To all the wonderful and strong women that read my blog, I’d like to wish you a very happy International Women’s Day!

What do you think of gender parity and the increasing visibility/inclusion of female minifigures in sets? Let me know in the comments, but please keep it civil!

4 years ago, the @legoninjagomovie was released in

Oh and before I forget, Happy International Hobbit

Tonight is the Mid-Autumn Festival aka the Mooncak

Congrats to #TedLasso and Jason Sudeikis on the Em

The new #rebuildtheworld ad is foreshadowing a ret

Last week, I was lucky enough to sit in on a Round

🥑 Anyone having avocado for brunch? One of the