LEGO’s Architecture Theme has always been a source of fascination for me. I collect Architecture sets on and off, but it’s not been a particular focus of mine.

I have a few notable pieces (Falling Water, Marina Bay Sands etc) but it’s been one of those themes that have always been shelved because of lack of display space from my end.

I recently got the opportunity to preview of the upcoming LEGO 21032 Sydney set, from the Skylines subtheme – possibly cause I’m based in Australia and all that. Small confession, this is the first Architecture set that I’ve ever put together, so go easy on me! 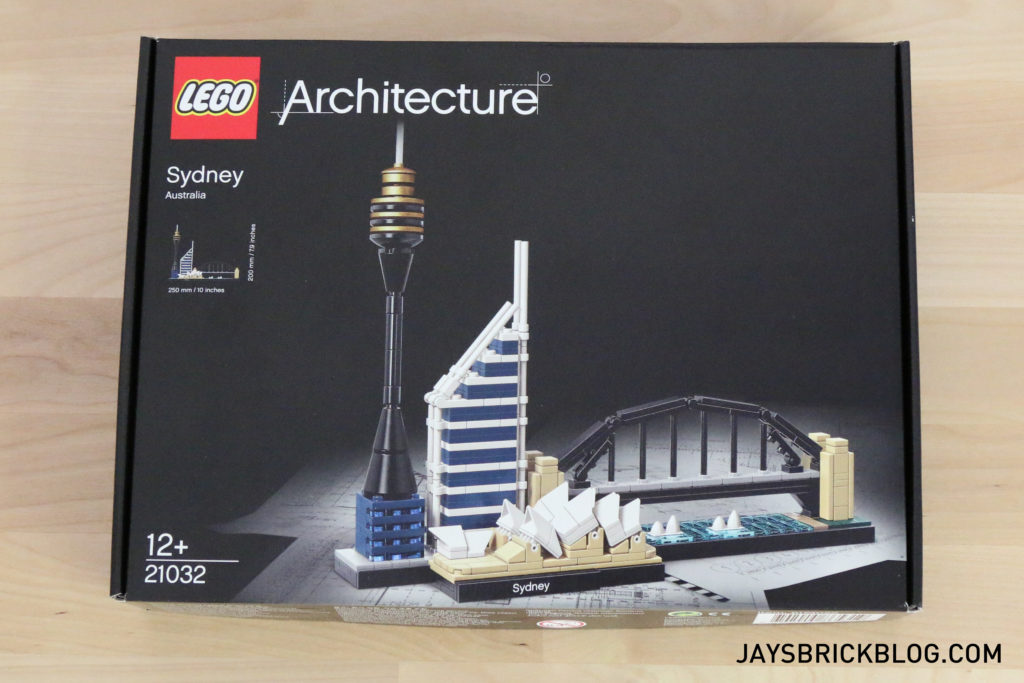 Late last year, LEGO released the Architecture Skylines theme, a spin-off of the main Architecture series which has focused on LEGO re-creations of some of the most iconic buildings and structures in the world.

The Skylines theme introduced both a macro and micro focus, as the models scaled up to contain skylines and landmarks from some of the world’s most famous cities, but scaled down to incorporate smaller builds.

I’m a Melburnian through and through, and if you know anything about Melburnians, there’s always this playful rivalry with Sydneysiders on who has the best city, a feud that dates back decades, so I’ll be honest – it was quite disappointing that we didn’t get a Melbourne Skyline! But hey, Sydney’s a pretty cool city, and I’ve kinda grown a little more fond of it since I travel there quite often for work.

At the very least, Australia is represented, which is always an awesome thing! 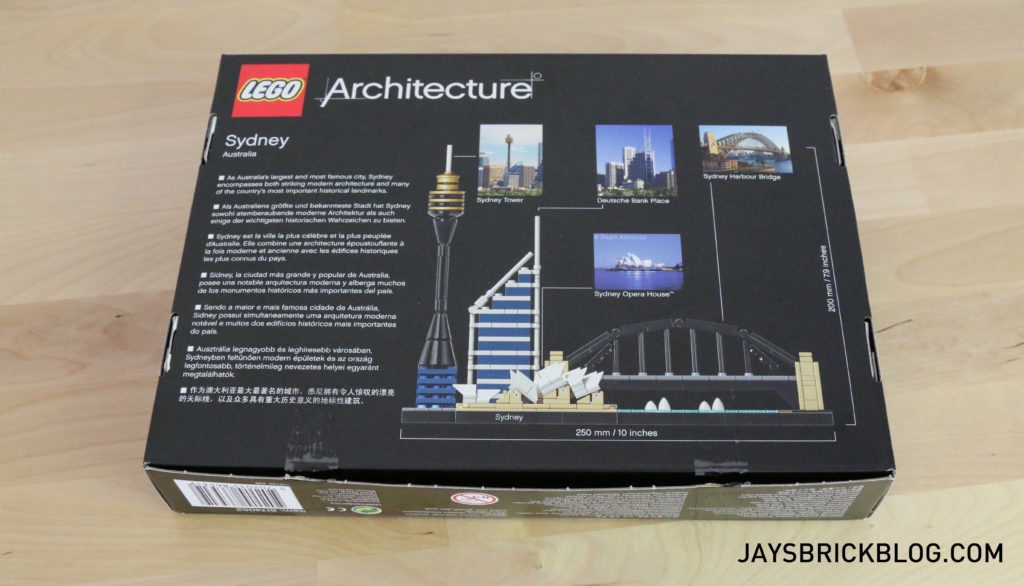 Here’s a look at the back of the box, which has a small blurb about the city of Sydney, dimensions of the set and some photos of the landmarks represented in the set. 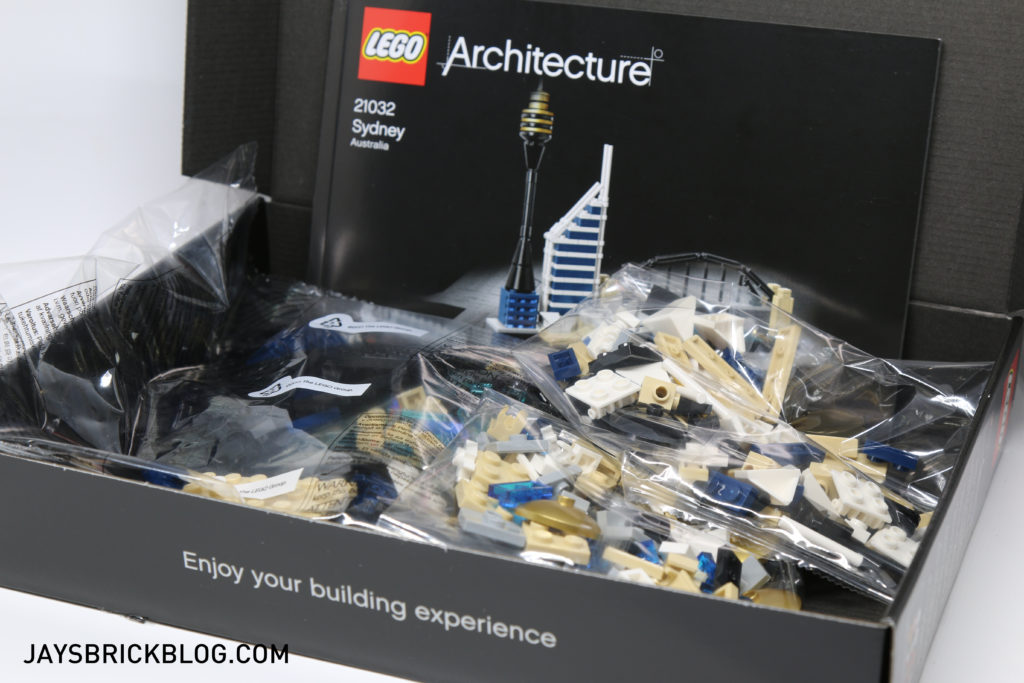 Pop open the box, and the first thing I noticed is “enjoy your building experience”, warmly greeting you. I don’t know why, but it gave me a pretty fuzzy feeling inside. Like when you’re in a fancy hotel and all the staff know and greet you by name.

There are three unnumbered bags and an instruction manual. 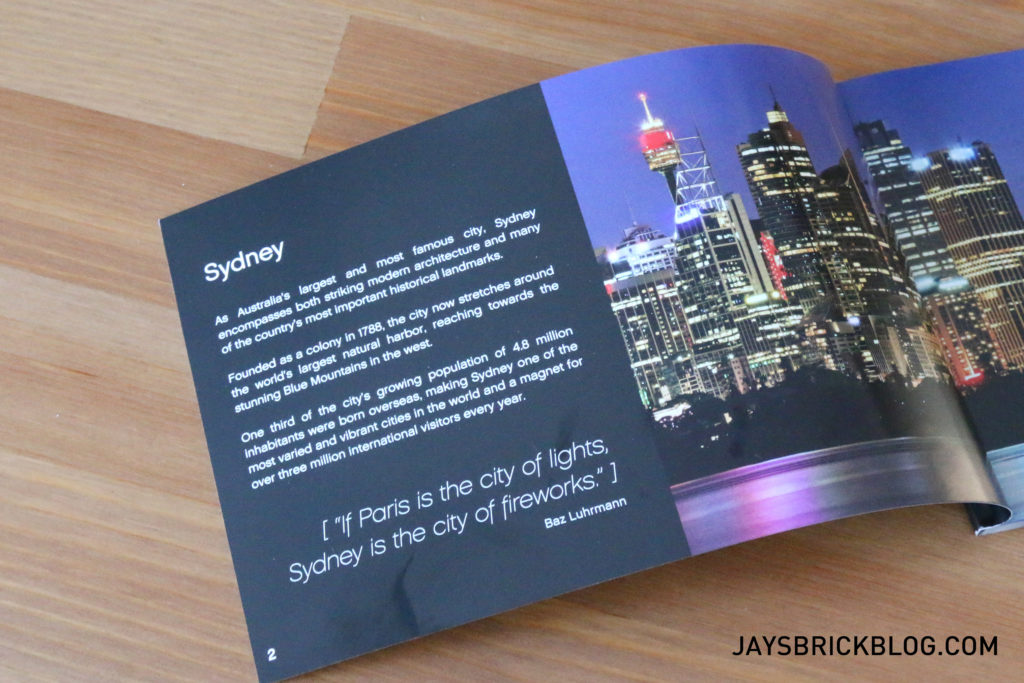 The instruction manual starts off with an introduction to Sydney, and is filled with beautiful photos of the Sydney CBD and skyline. These descriptions and photos are great, as they give the set a lot more context and tell you a lot about the city that you’re soon to embark on an adventure on, via LEGO bricks. 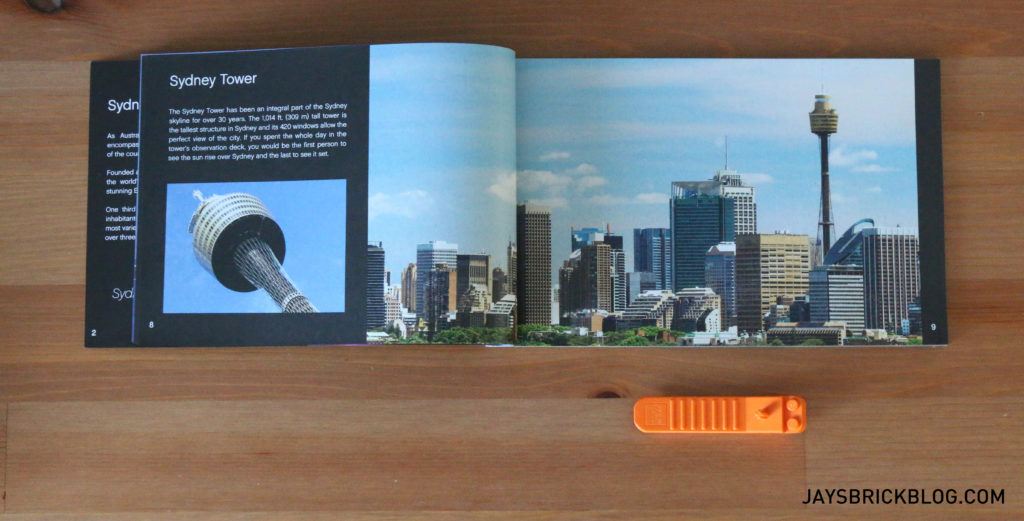 It almost feels like a tour guide of sorts, and for those that love to travel or experience new cities and cultures, this makes for a hella good way to travel vicariously through the medium of LEGO.

Each landmark has a short story on it, and as familiar as I was with Sydney, I still managed to learn a thing or two about these buildings. 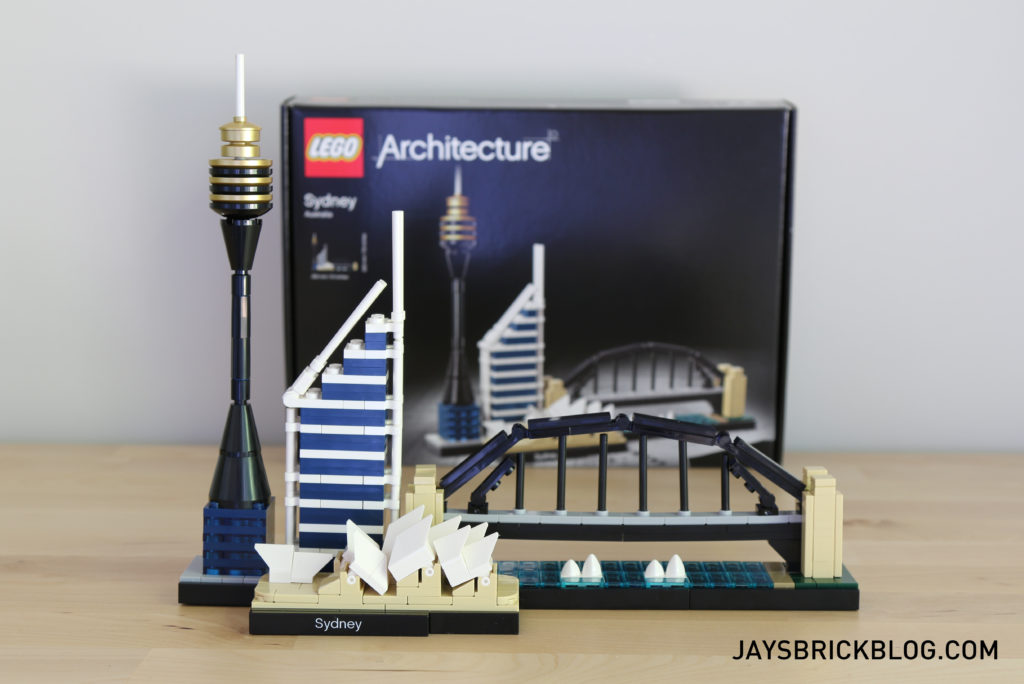 The build was quite an interesting one. Because you’re building at a micro-scale, the experience differs greatly from a traditional LEGO set. I quite enjoy micro-scale builds, so it was almost therapeutic putting Sydney together.

For a small-ish set, it didn’t feel like a short build and I was quite surprised at the time it took for me to assemble the set. I obviously take my time when I build as I dislike rushing through a set, and piecing the landmarks together one by one was a very interesting affair.

Obviously there’s a little bit of novelty here, as this is my first Architecture Skylines set, but I enjoyed the varied experience of putting it all together. 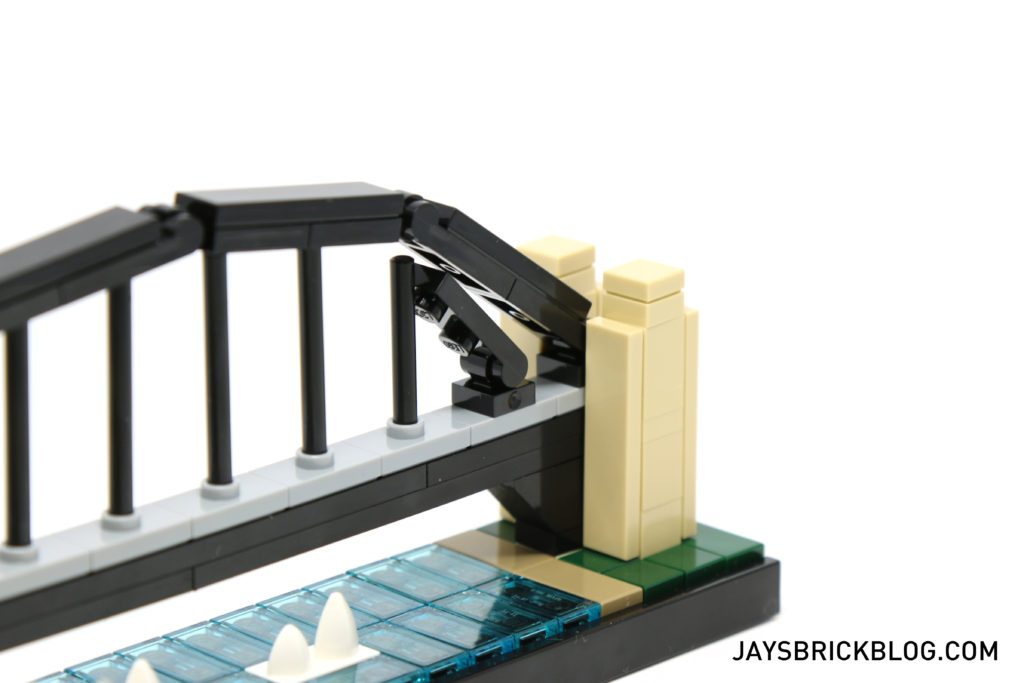 The build starts off with the base of the entire Sydney Skyline, and the first landmark you tackle is the Sydney Harbour Bridge. Most people think that the Sydney Opera House is the best thing about Sydney, mostly due to its prominence in tourism marketing, but I disagree.

The Harbour Bridge has always been a perennial favourite of mine, mostly because of how large it is. If you’ve never been to Sydney, the photos do not do it justice. It is a massive monument that is testament to the ingenuity of engineers and architects.

Cars and trains run through it and it boldly stretches across the harbour, connecting the CBD with the North. It’s really impressive and I’m always blown away by the sheer size of the bridge.

One of the things I really liked about the Harbour Bridge in its micro scale are the tan pylons. They’re really accurately represented at such a small scale. 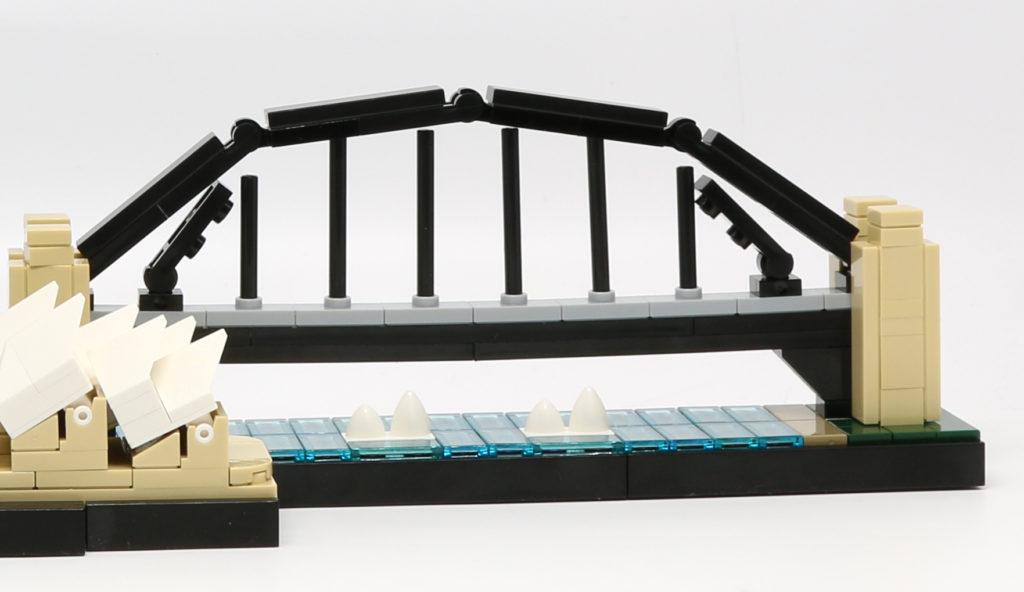 The Bridge itself is quite narrowand minimalist. The black sticks used make it quite recognizable, and for the most part, it looks good suspending itself over the water. 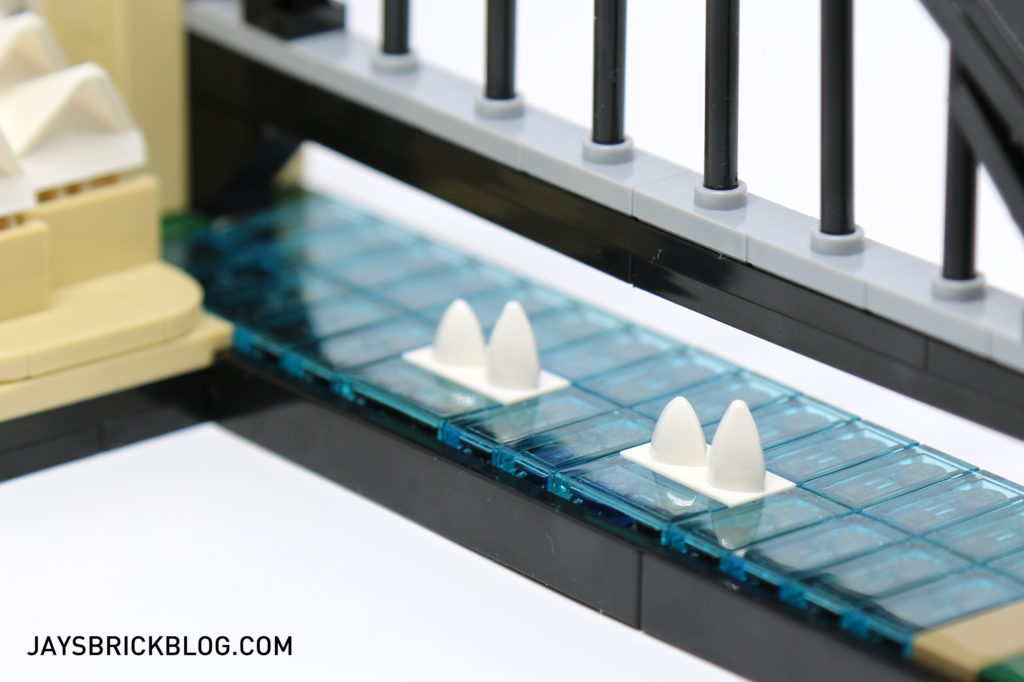 Beneath the bridge, there are two sailboats. It’s a really creative use of the “tooth” piece, and both boats look really good surrounded by a sea of transparent blue tiles. 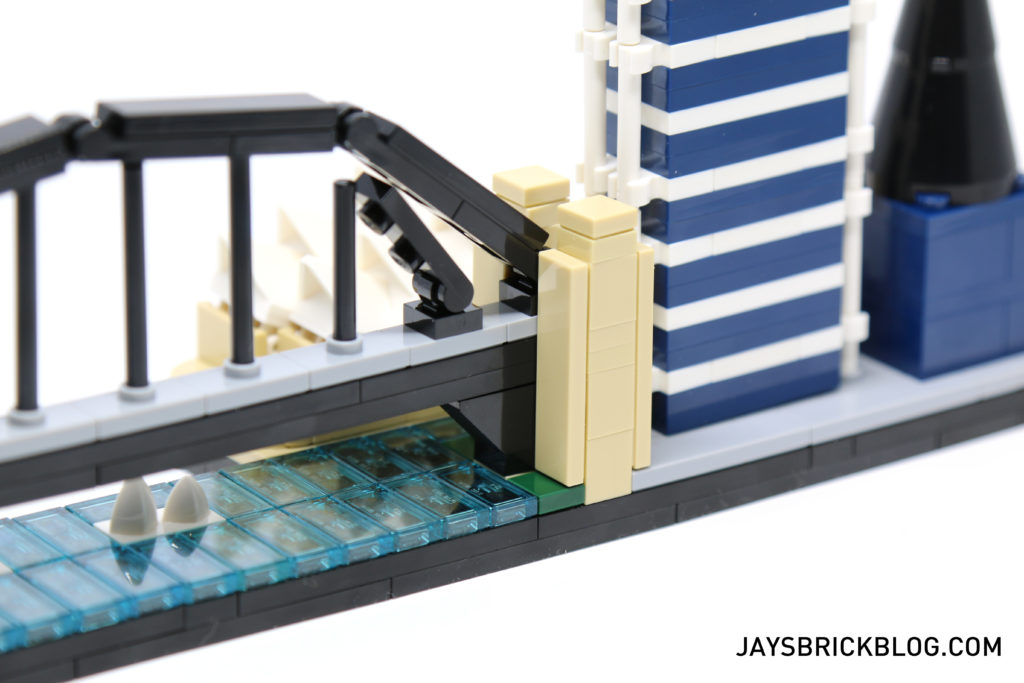 Oh, and I was also very impressed by the attention to detail with this model. The dark green tiles at the foot of the pylons (Sydney-side) are for Dawes Point Park which is one of my favourite spots to just hang out and enjoy the balmy weather. 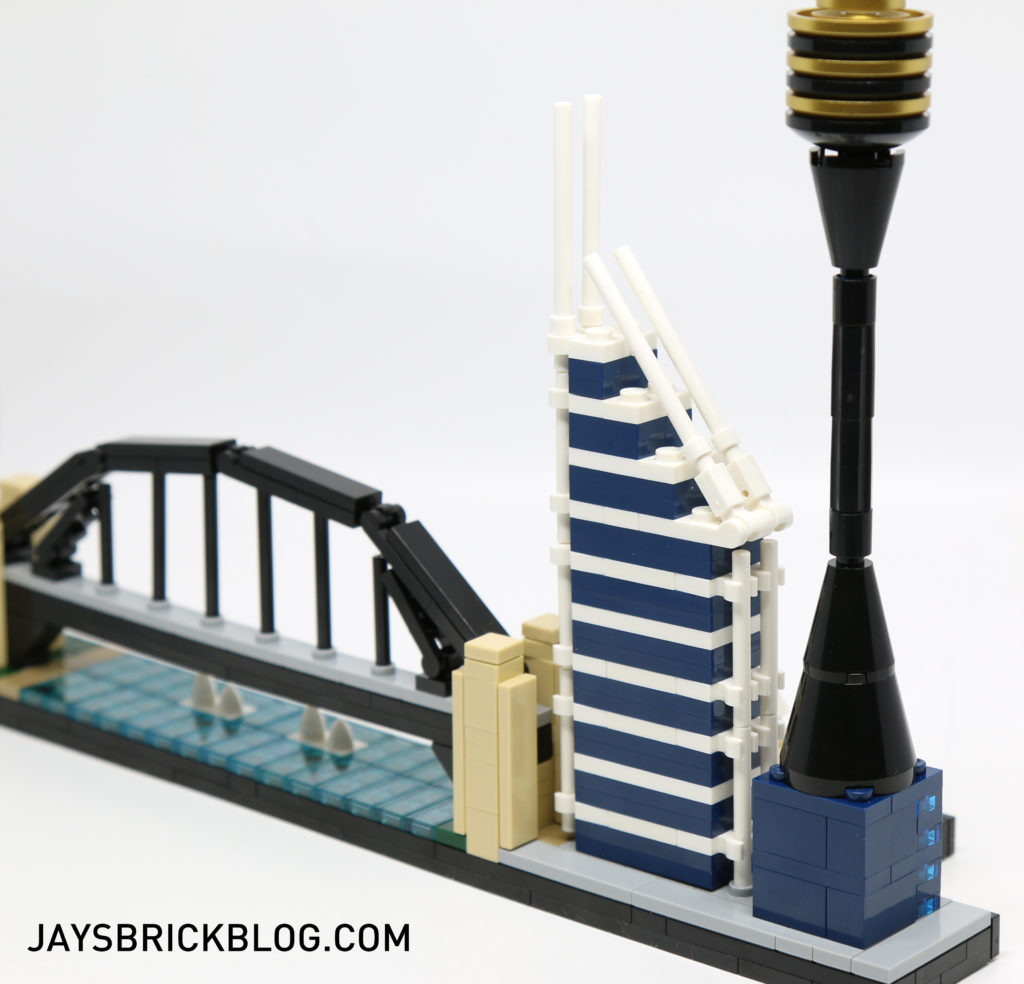 Unlike most capital cities, Sydney isn’t exactly famed for its iconic skyscrapers, so we get the Deutsche Bank Place, a building with quite a peculiar design thanks to the spires which kinda make it look like an incomplete frame of the structure. 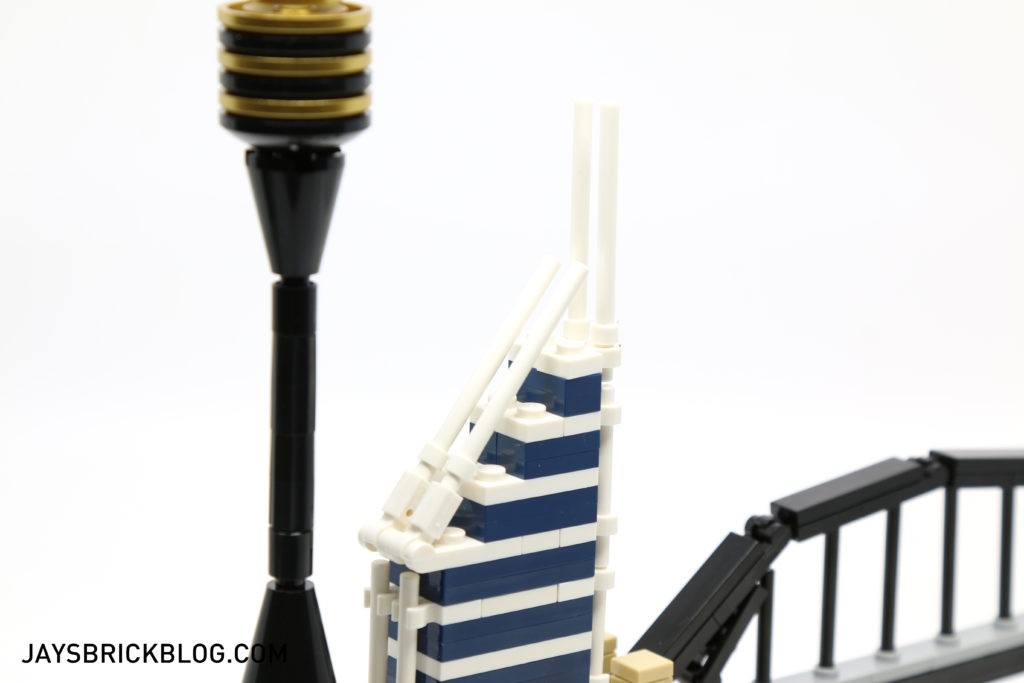 It has a simple dark blue and white design, but for the most part, it’s quite true to the look of the actual building. The only thing that I can think of to improve the design is if the designers had made the pattern on the bricks a lot more grid-like, instead of utilising horizontal stripes. 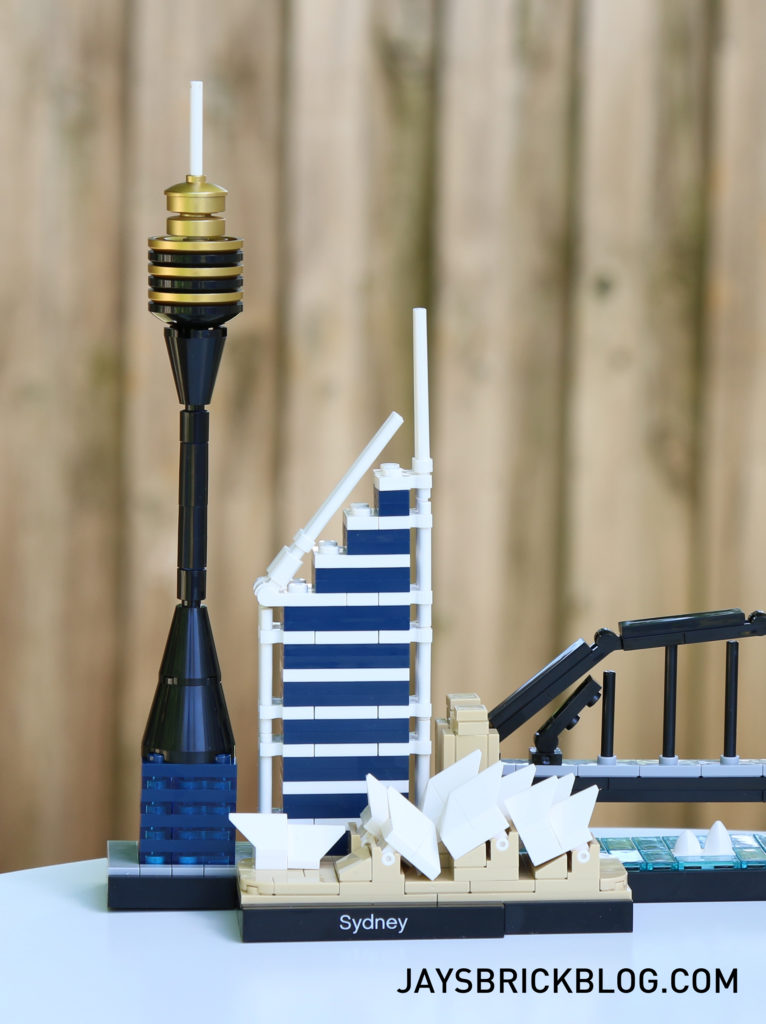 Next up is Sydney Tower aka the giant Westfield sign. Truth be told, I’ve never been up the Sydney Tower, and I have little interest in it as I think it actually looks quite boring and old-fashioned. 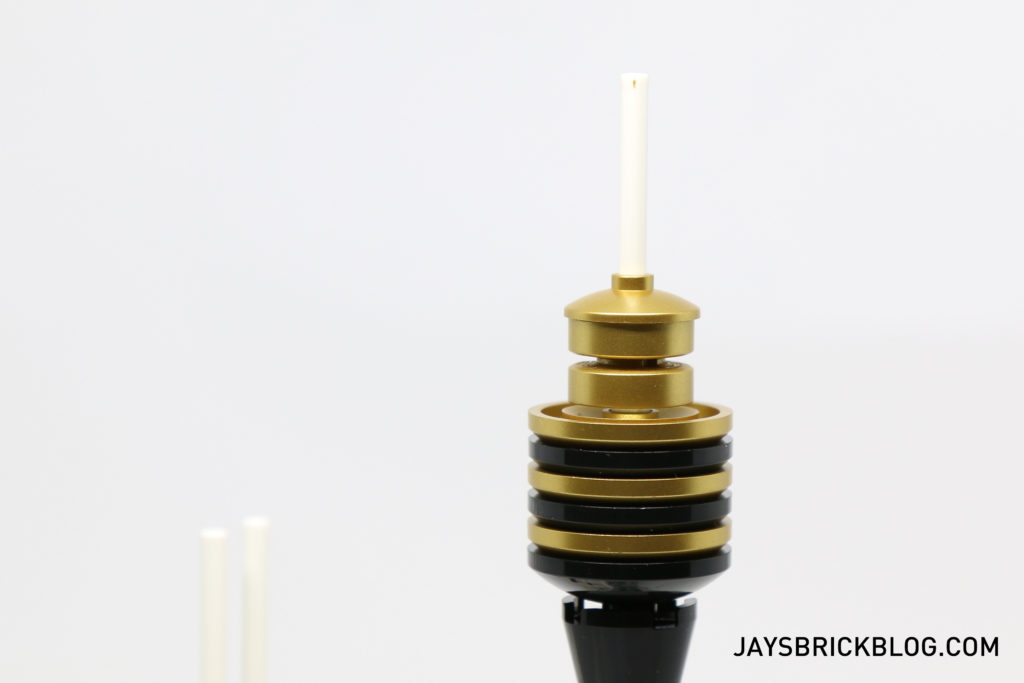 The LEGO model is quite small and the only thing I really like about it is the pearl gold dishes used for the Tower Eye. Also, it should really have been called Centrepoint Tower which is the name most local still use to refer to it as I’ve been told. 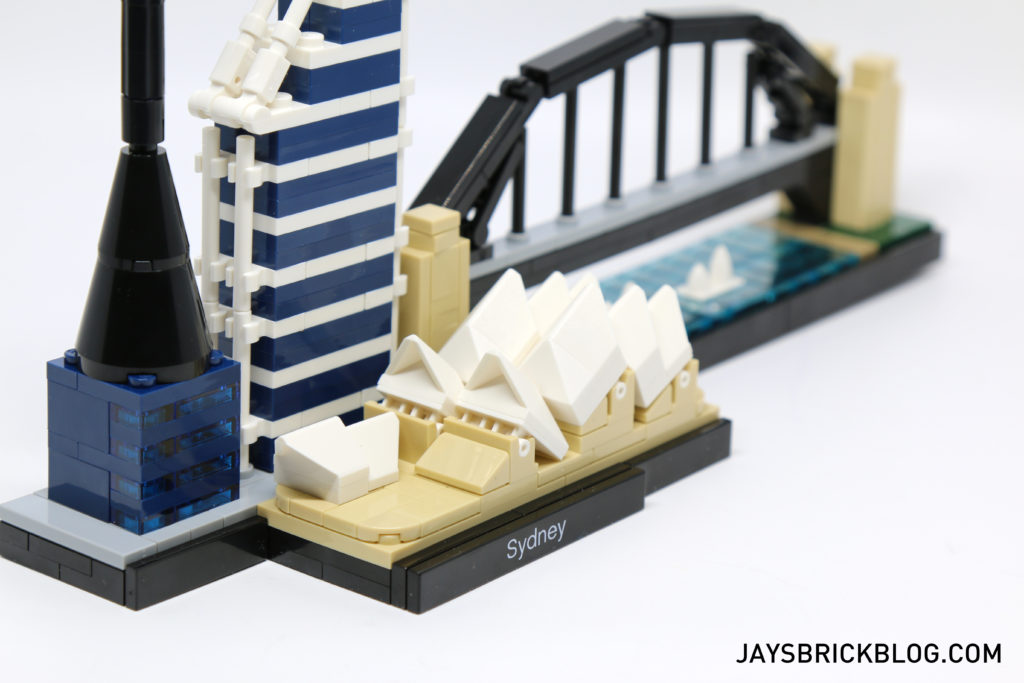 Last but not least is the crown jewel of Sydney – the Sydney Opera House. This is the third time the iconic shell-like landmark has been featured as a LEGO set, first as an Architecture set and more recently as a Creator Expert set.

This is the smallest rendition so far, but I think it actually looks better than the Architecture set! 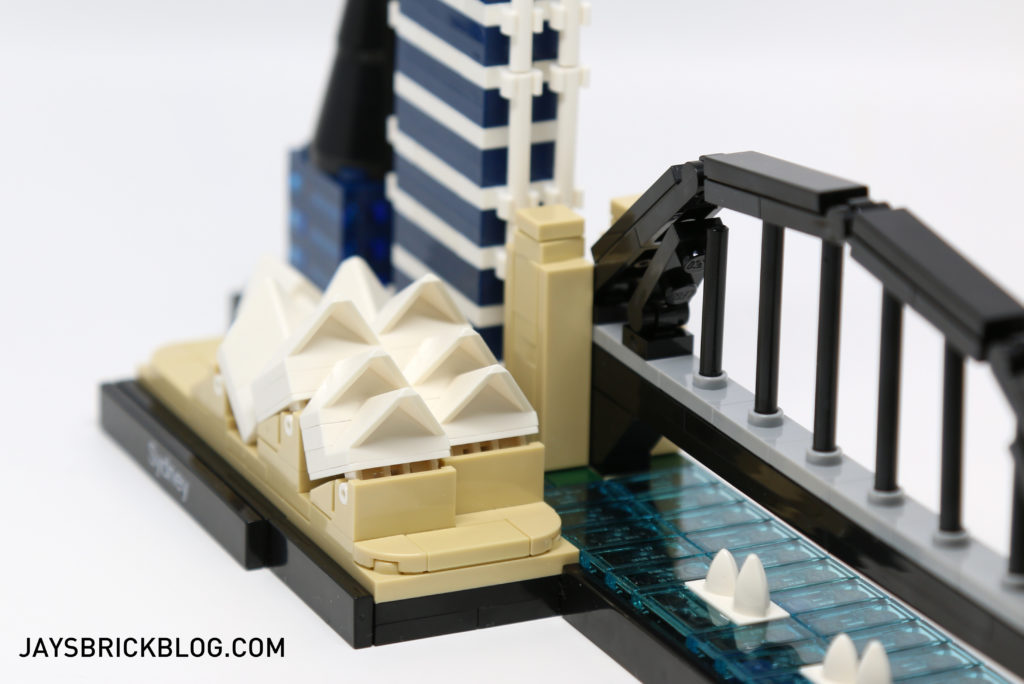 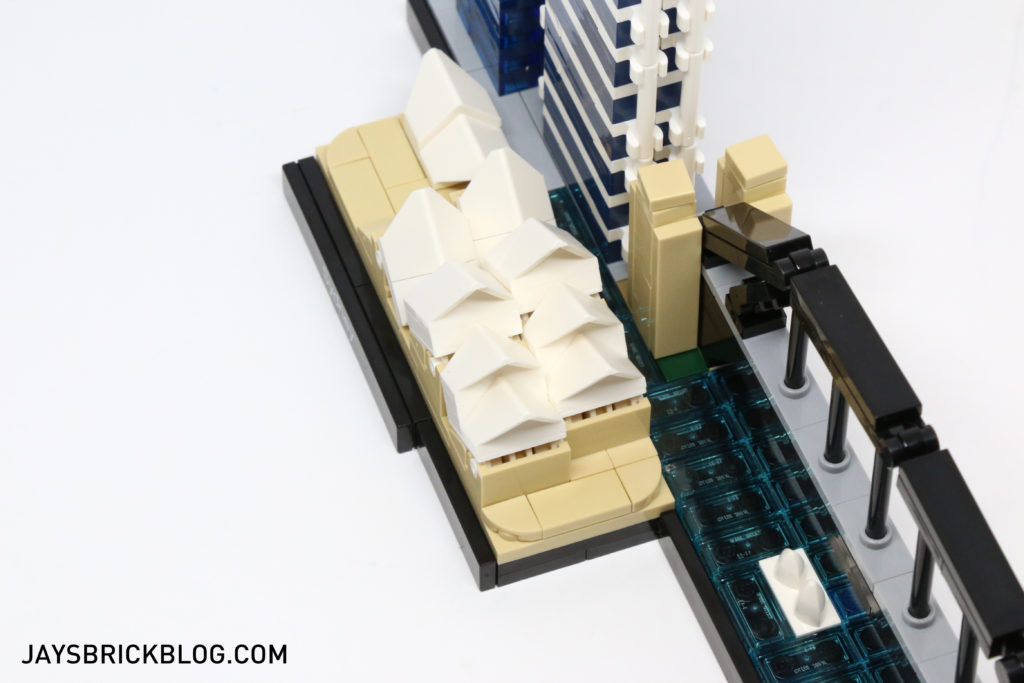 The sails of the Opera House are rendered in spectacular form, at such a tiny scale – so much so that it looks almost like the real thing. The design is pretty clever, and employs an asymmetrical layout for each of the sail, further adding to the model’s accuracy.

I was also delighted to finally get a chance to build with the new “pizza slice” curved corner piece, which looks fantastic when used at this scale. The ability to create rounded edges using it is going to push LEGO designs and models to the next level. 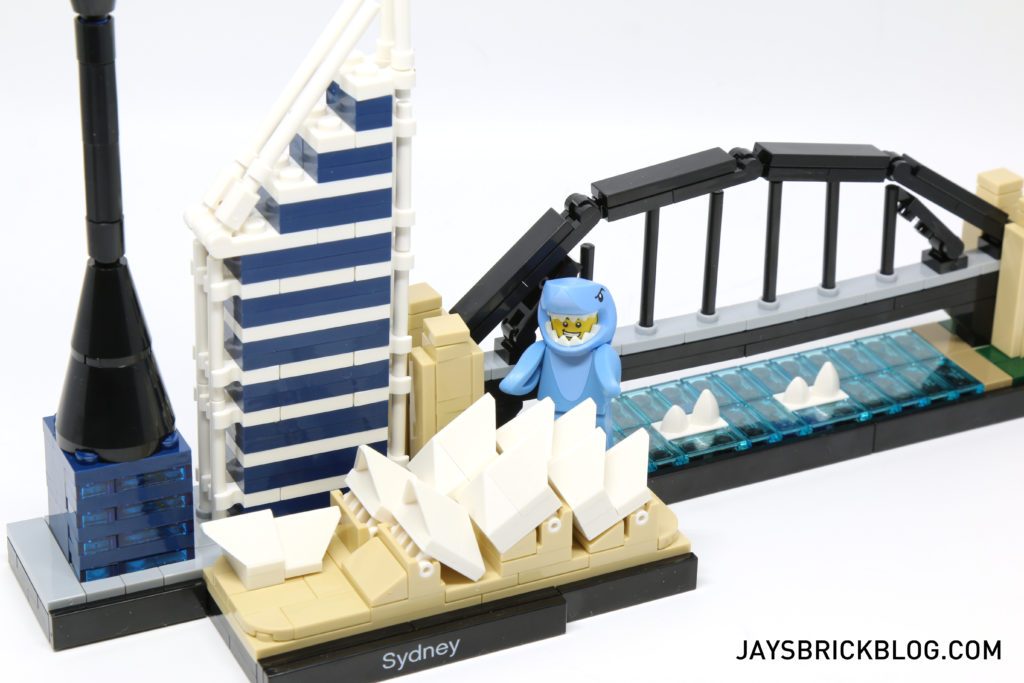 The only thing this set is really missing is some Aussie flavour. Shark Suit Guy from Series 15 perfectly fills that role. He also looks hilarious as a giant great white shark ready to terrorise Sydney, kaiju-style. 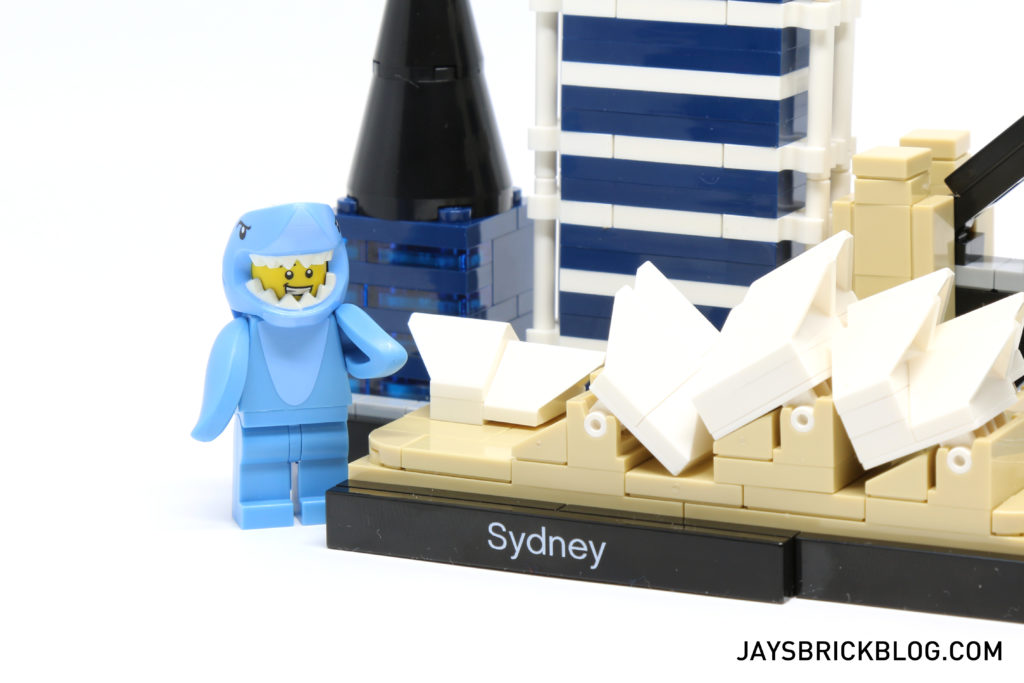 Makes me wonder why they didn’t include him in the set. When displaying the Sydney Skyline Architecture set, you’re almost obliged to place him somewhere in the vicinity. 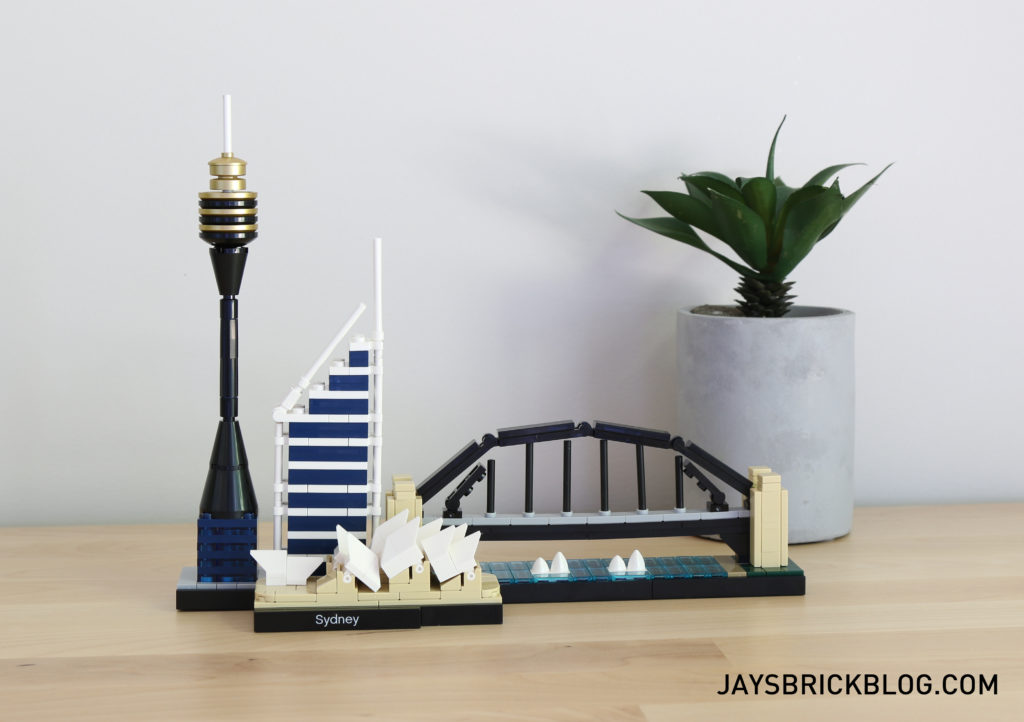 Final thoughts: All in all, I really enjoyed the 21032 Sydney Skyline. It made for a very pleasant introduction to the LEGO Architecture Skylines theme, and because it’s an Australian city, it made it all the more special.

Like most LEGO Architecture sets, Sydney Skyline’s strongest feature is how good it looks on display. It has a very sleek, mature and classy feel to it, which is great as the Architecture Theme is generally aimed at the older crowd.

The build is varied and quite fun in parts – I really like building with smaller elements, so this hit the spot for me in terms of how much I liked the build experience. It was also just the right length, neither too long nor too short and there’s enough variety in it that it didn’t feel repetitive in the slightest.

It captures the Sydney landmarks remarkably well and if you’re an Australian LEGO Architecture fan, I would highly recommend placing this high on your wishlist for 2017!

There’s not a lot I didn’t like. Deutsche Bank Place and Sydney Tower were pretty boring and uninspired, but that’s mostly due to the source material they’re based on, so nothing against the designers.

Outside of the Harbour Bridge and the Opera House, there aren’t that many massive landmarks to draw on. I think Luna Park would’ve been a lot of fun, but it’s probably challenging getting the look right at this scale.

I was also quite sad that we didn’t get a LEGO statuette in this set, given that each set in the first wave had one! I do wish that the designers could’ve hidden it somewhere in the set. Ah well.

This is a really fun set, and I think that it makes for a great introductory set to the Architecture Skyline range. Even if you don’t have much exposure to the Architecture theme, I can readily recommend it as a different (but good) LEGO experience if you’re hungry for something other than typical sets. It also helps that I feel that the price is quite affordable, for what you get.

Oh, and it also makes for a great gift, especially for older (or more mature) LEGO fans, like most anything else in the Architecture Theme.

Overall, I’m mostly glad that we got an Australian city, and Sydney is a fun little set that more than holds its own against the other big city Skylines.

Dear LEGO, please do Melbourne next!

21032 Sydney Skyline’s release date is 1 January 2017 and will be available with the other two LEGO Architecture Skyline sets – London and Chicago at the same time on LEGO.com.