LEGO City has failed to appeal to me for the last few years. Apart from outlier sets like Fun in the Park and Service Station, the theme has been plagued by endless repetition – it mostly just feels like the same old Trucks, Police and Thieves and Firemen sets recycled year after year.

This year, LEGO managed to sneak in a special little set that stands out from the recent stale offerings – the LEGO City Pizza Van, a charming little build that captured my attention for one simple reason – pizza is like in my Top 3 favourite foods ever, alongside Burgers & Sushi.

In this relatively short review, find out why the Pizza Van is just like a real pizza – affordable and oh-so-satisfying. 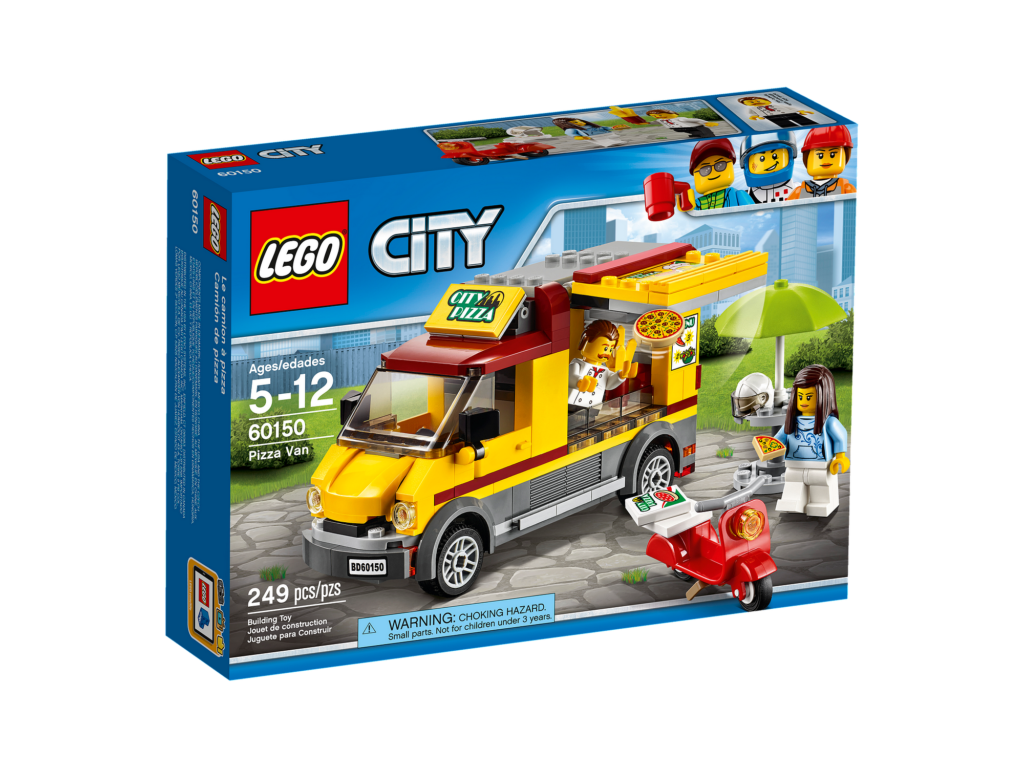 So… before I start this review, I’m just going to say that I dislike the term Pizza Van. Mostly, the “van” part, and I very much prefer calling this a Pizza Truck, because it’s pretty much a food truck. Thus, I’ll mostly be referring to the Pizza Van as a Pizza Truck and use the term interchangeably through the review

Food-focused LEGO City sets are a bit of a rarity in this day and age, so it’s a breath of fresh air that we get something fun like the LEGO Pizza Truck. It’s also great to see LEGO City inhabitants working in professions other than the Police force, Firefighters or criminals. 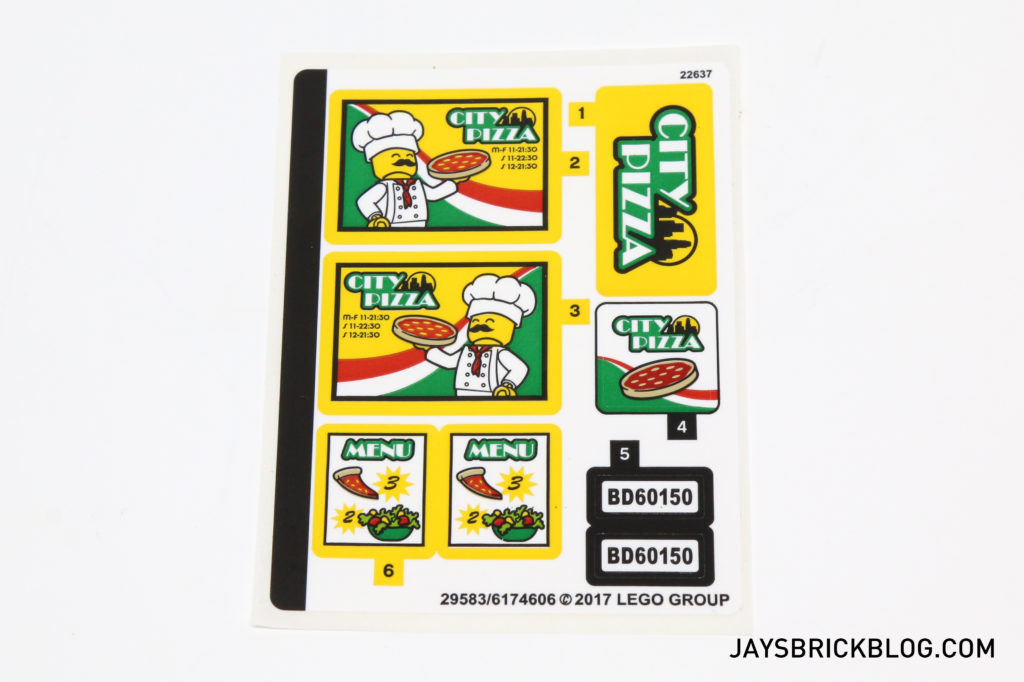 Here’s a look at the sticker sheet for the set. They’re mostly rectangular-shaped and easily applied, so I have no real complaints here. Unlike some other sets, these stickers are absolutely essential to the Pizza Truck, as it gives the vehicle the necessary context of a Pizza food truck.

These stickers are kinda like cheese on a pizza – cheese-less pizzas are possible… but why bother? 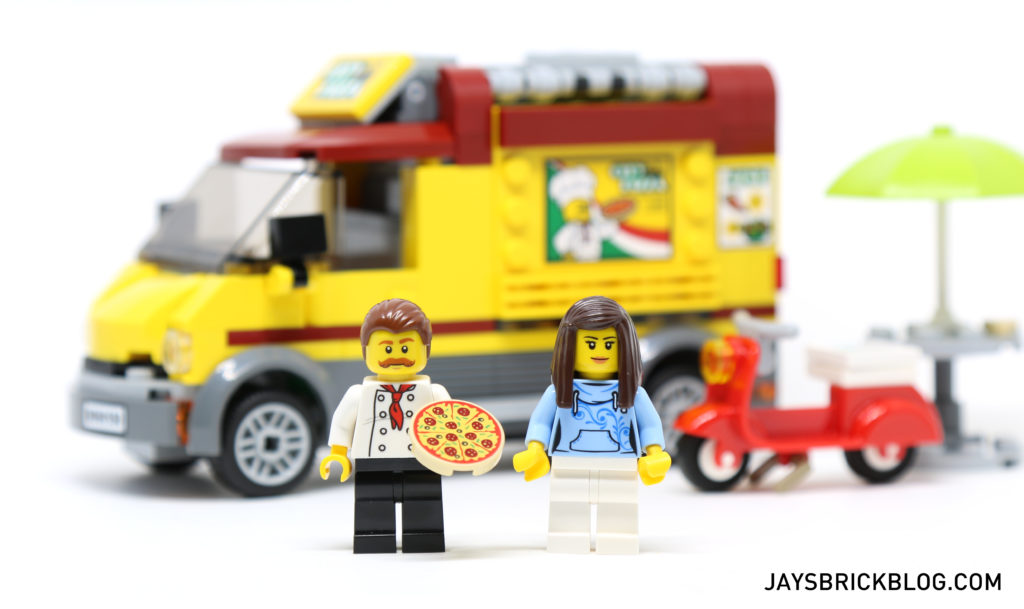 The Pizza Van comes with two minifigures – a Pizza Chef and a Pizza Enthusiast. I’m actually not that sure what the woman’s role is – I actually think she fits in better as a Pizza Deliverywoman.

For a City set, these two minifigures actually consist of some pretty uncommon parts. The Pizza Chef’s head and hairpiece are also relatively rare.

I really like the Pizza Chef’s very Italian moustache. I’d trust a guy with an impressive ‘stache like this to make my pizza.

The Pizza Deliverywoman is also equally rare. Her hairpiece only appears in two recent sets, and she also sports a brand new and (so far) exclusive torso which features a very nice powder blue hoodie with a very artistic flower and leaf pattern. 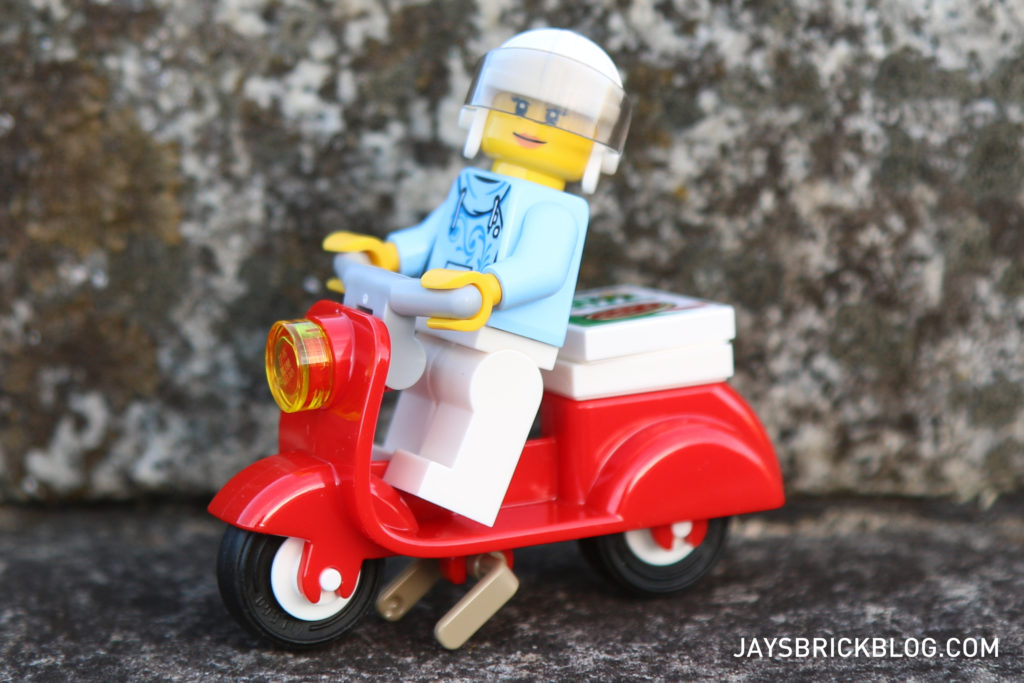 For pizza deliveries, the set comes with a red scooter or Vespa as well as a helmet for the rider. Affixed to the back of the scooter are a bunch of pizza boxes, one of which is a stickered tile, which is a bit of a shame.

LEGO scooters are gorgeous, and one cannot have enough of them, so I’m pretty pleased to add yet another one to my collection. 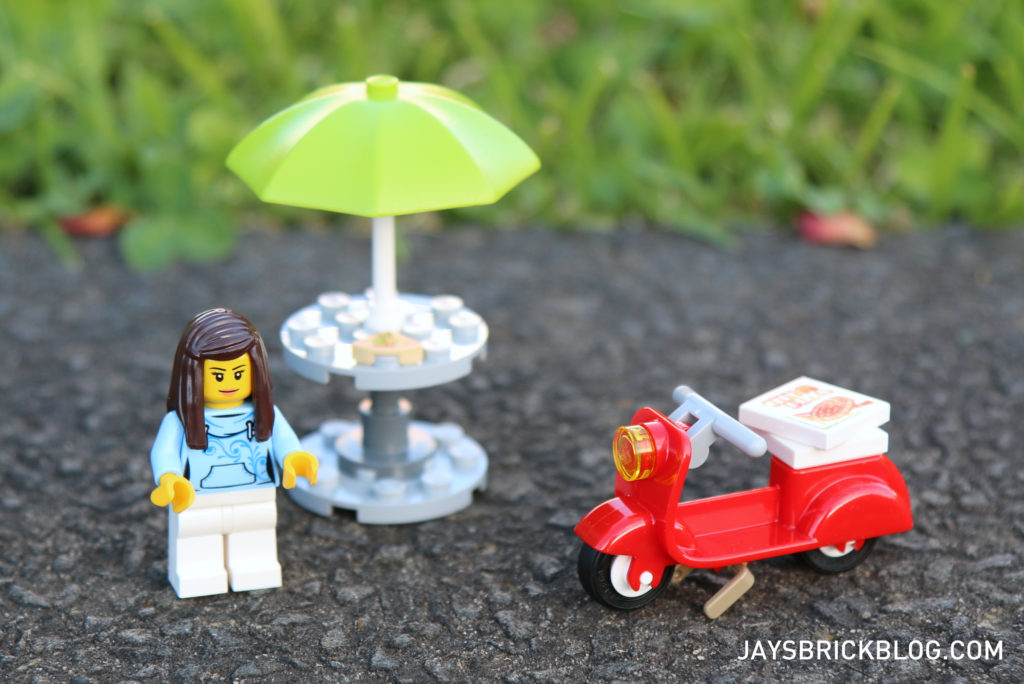 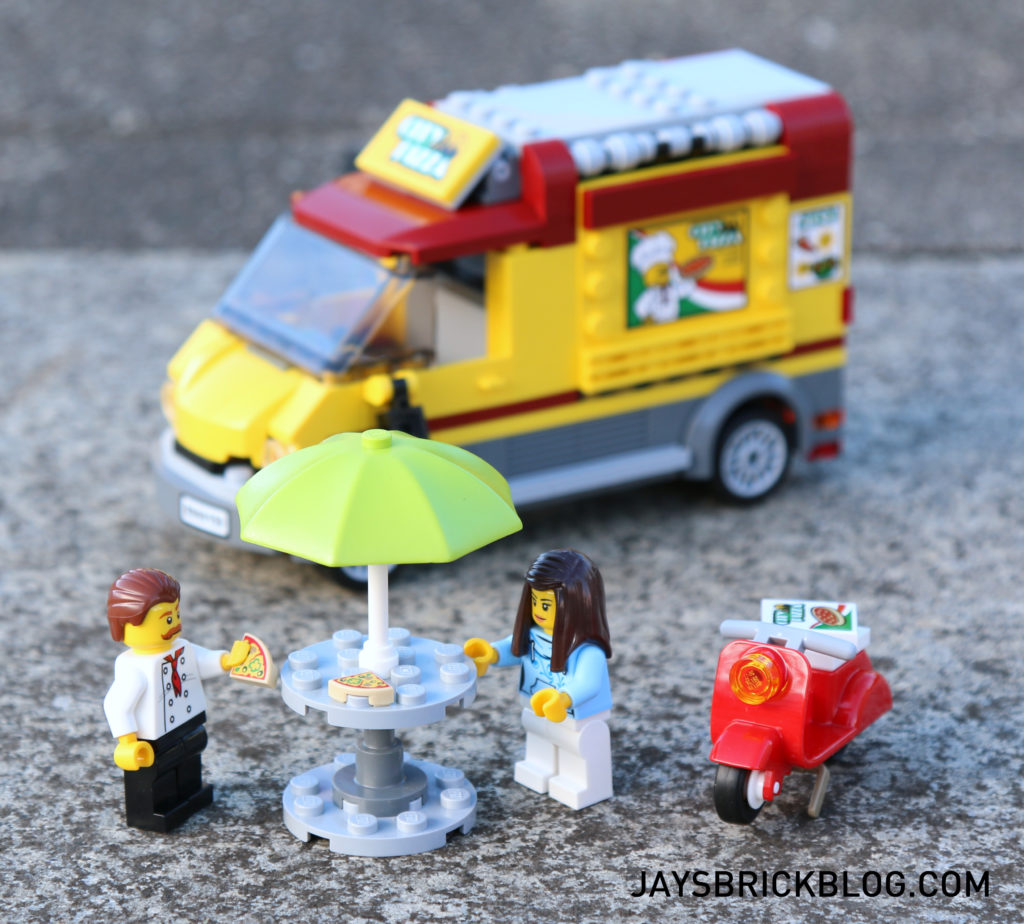 In addition to the scooter, we also have a small outdoor table with a green umbrella to go along with the Pizza Van. The green sunshade used for the table is also pretty rare, having only made an appearance in one other set. 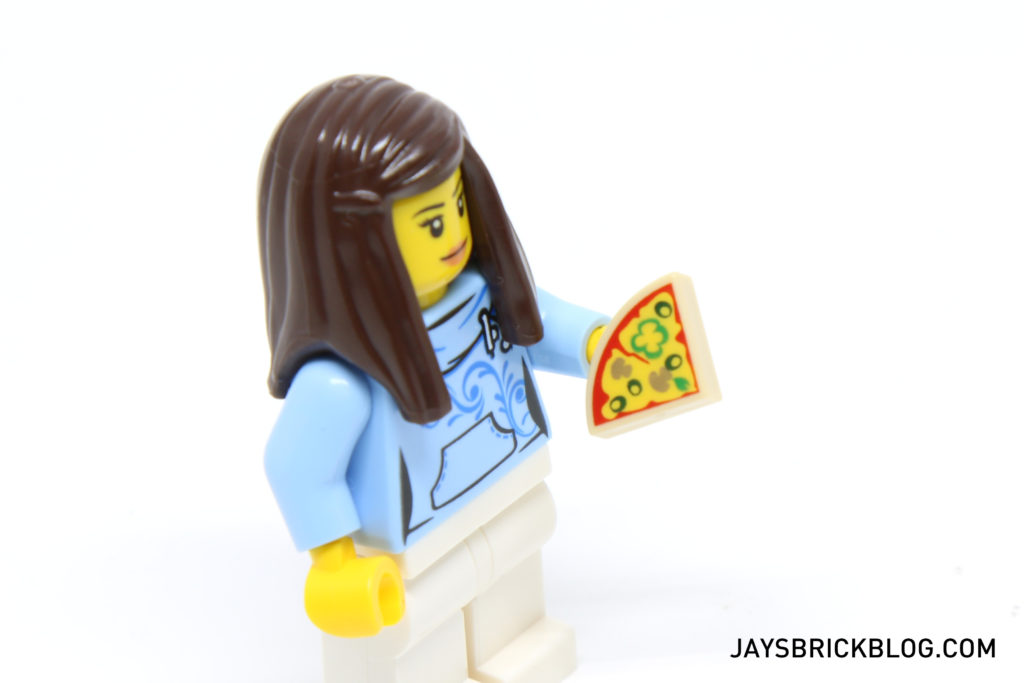 One of the most exciting new parts released by LEGO this year is the new Quarter Tile piece and we get a printed one in this set that acts as a slice of pizza! Any time LEGO introduces new food elements is always an exciting time, and I love how great they look. 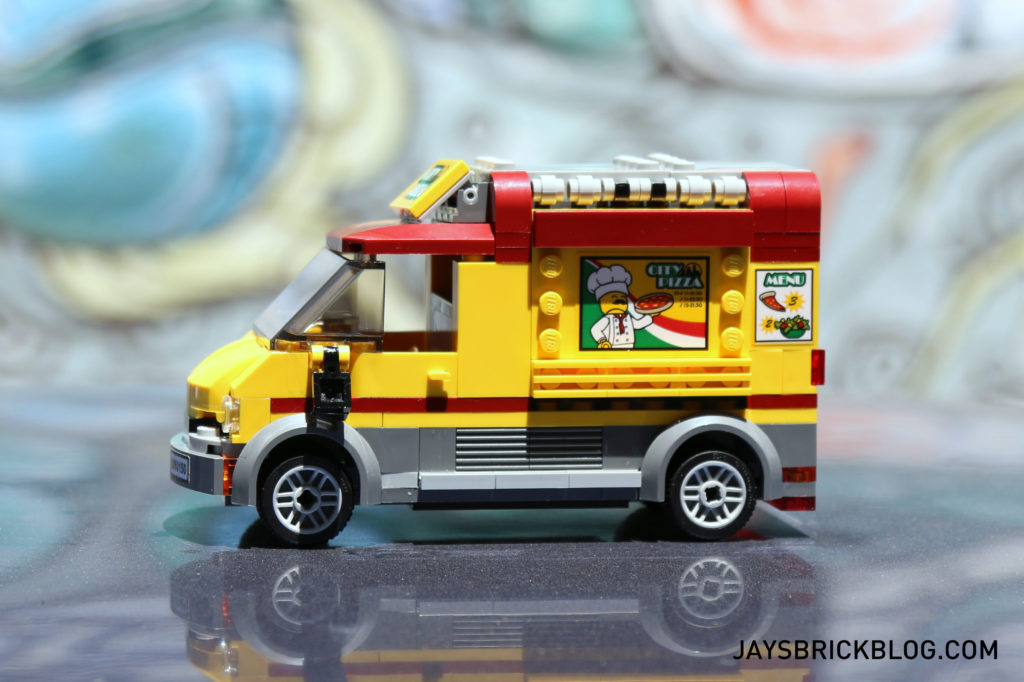 The Pizza Truck is a thing of beauty. Firstly, I really love the yellow colour scheme which is really eye-catching. The dark red accents and grey sections are very complementary the overall colours.

It’s a simple but sturdy model, that will fit in effortlessly with your other LEGO City vehicles. They really nailed the food truck look and feel with the Pizza Van. 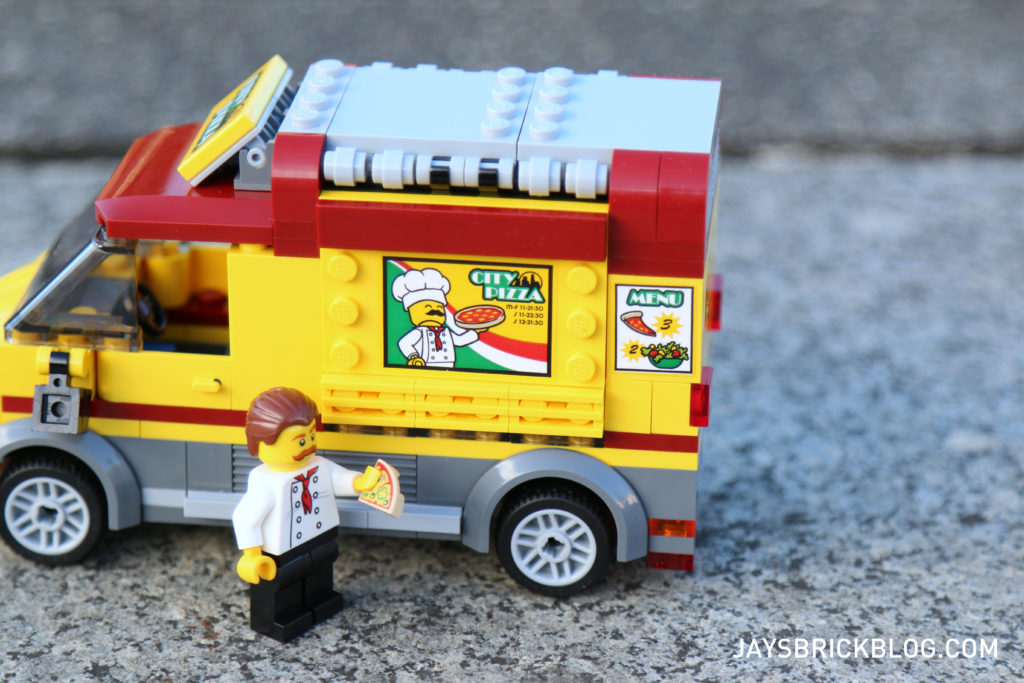 I really like the signage on the side – we have a large City Pizza banner, complete with a happy chef, and a small menu right next to it. Strangely enough, even though there is a bowl of salad advertised, there is no salad at all to be seen in this set! The stickers are mirrored on each side.

City Pizza is a chain of LEGO City Pizza restaurants or outlets, and have made an appearance most recently in 2016’s Service Station set. 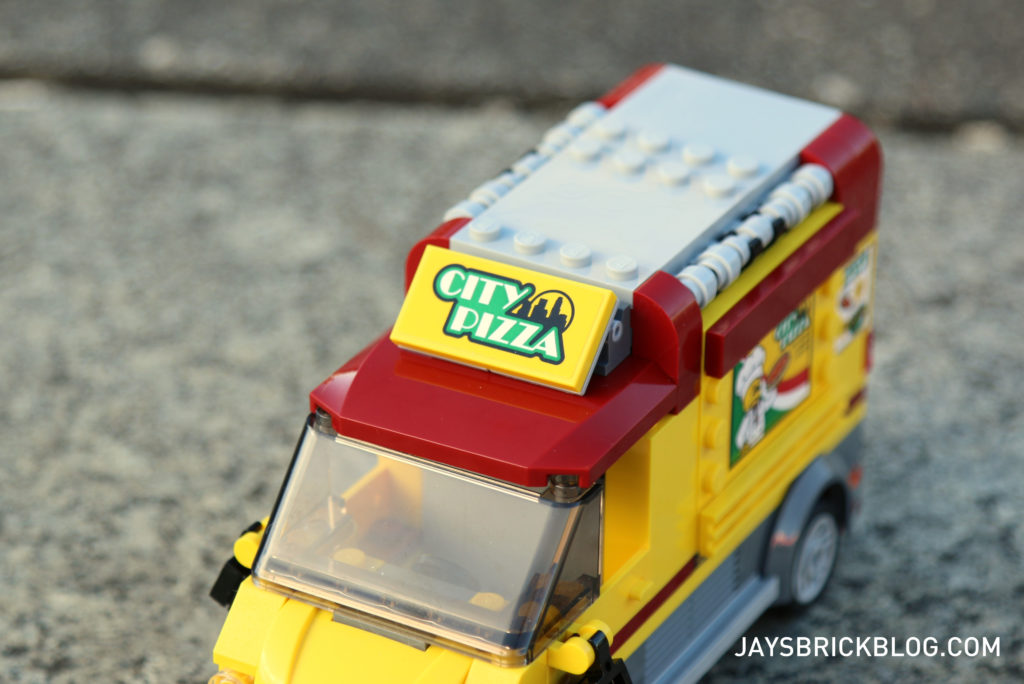 Here’s a look at the roof sign and front of the Pizza Truck. Like most LEGO city vehicles, you can easily remove the roof to place a minifig in the driver’s seat. 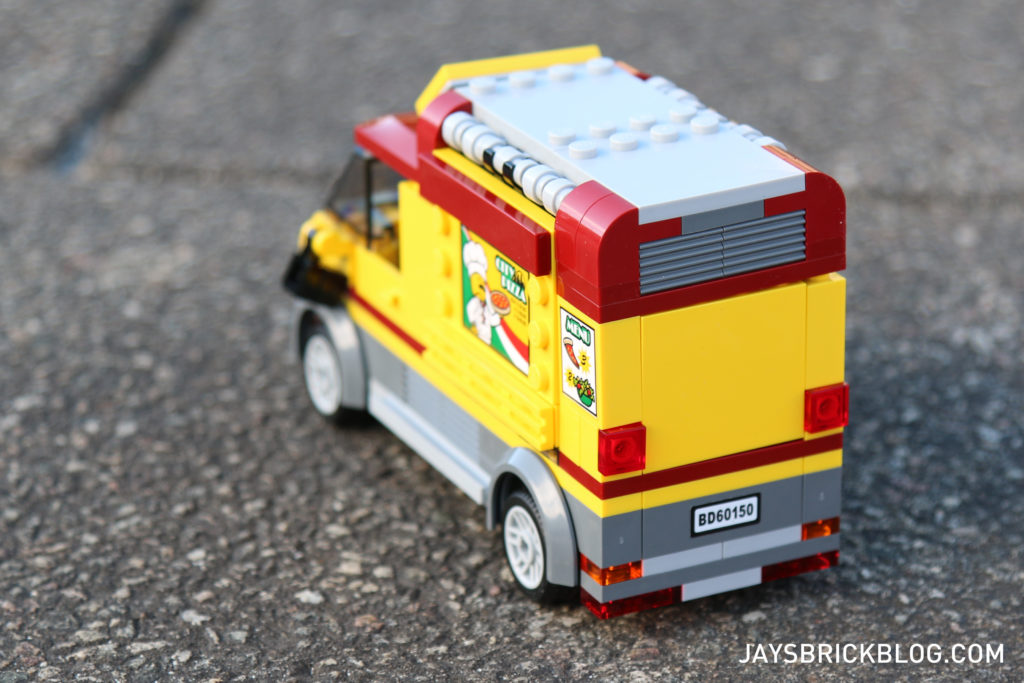 The Pizza Truck’s weakest view is from the back, where it’s quite plain. There’s one small detail that I like – the grey grills that act as vents. 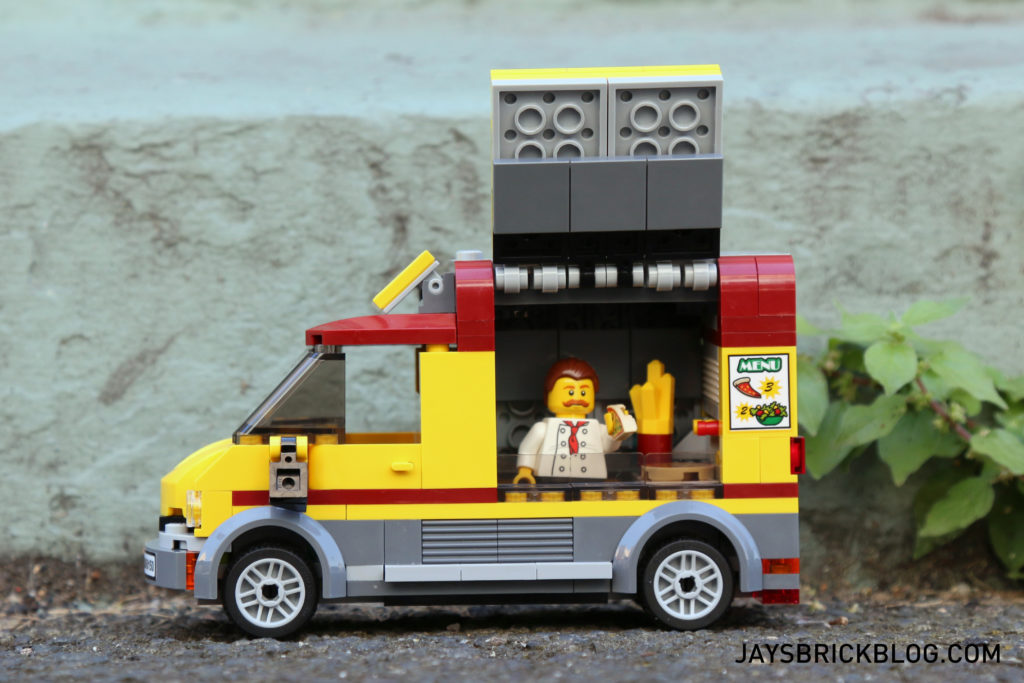 Here’s where things get taken up a notch. The side of the pizza truck flips open to reveal a window for the chef to serve customers! You can also get a glimpse of the inside of the Pizza Van.

It’s a really simple mechanism, but works so well in tying the entire truck together. I really love the transparent glass barrier at the bottom of the window, and how well the chef looks standing inside. 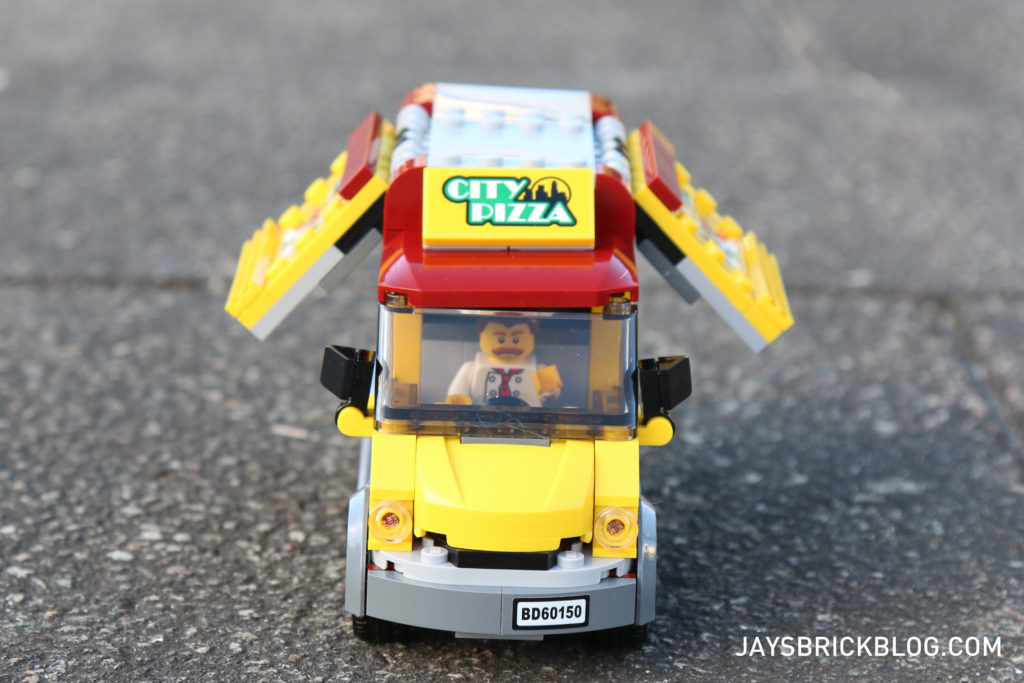 Both windows can flip open, which allows the Pizza Van to do a really good impression of a Star Wars Republic Gunship. 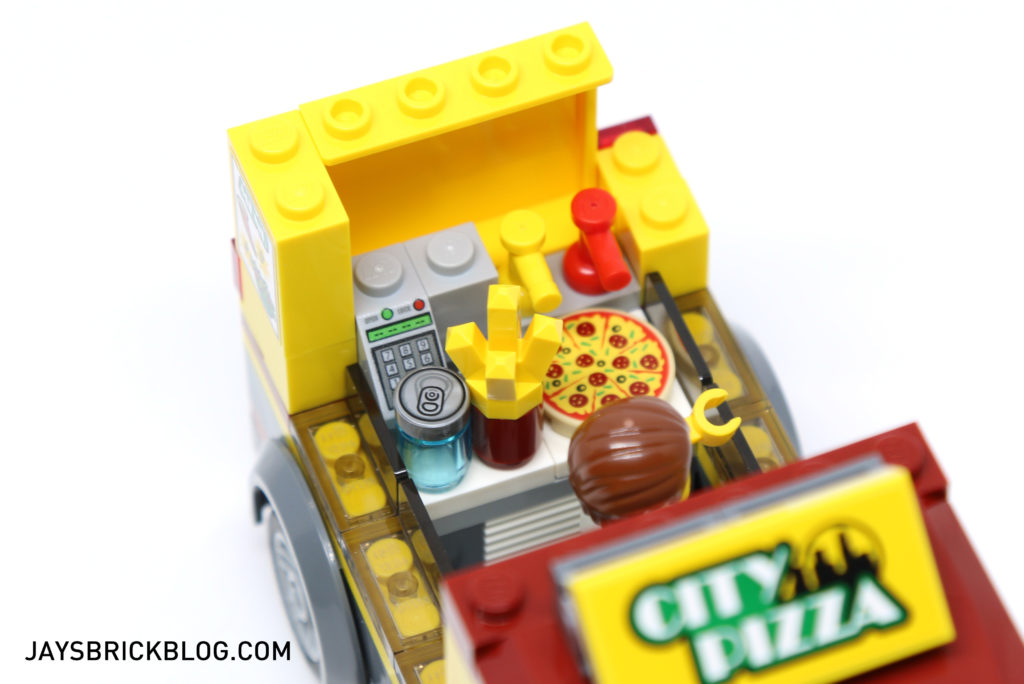 Despite having a really small interior, the LEGO designers managed to pack a lot of cool bits into the Pizza Truck kitchen. There’s plenty of stuff going on in such a tight space.

The most eye-catching thing in the kitchen is the yellow crystal piece which has only appeared in the Friends Heartlake Shopping Mall. I’m not too sure what this is, my first thought is that it was breadsticks or cheese, but it could also be some chips (fries) in a cup.

There’s space for a pizza to be prepared/cooled, some tomato sauce and mustard dispensers, a can of water (with the printed 1×1 round tile!) and a cash register. 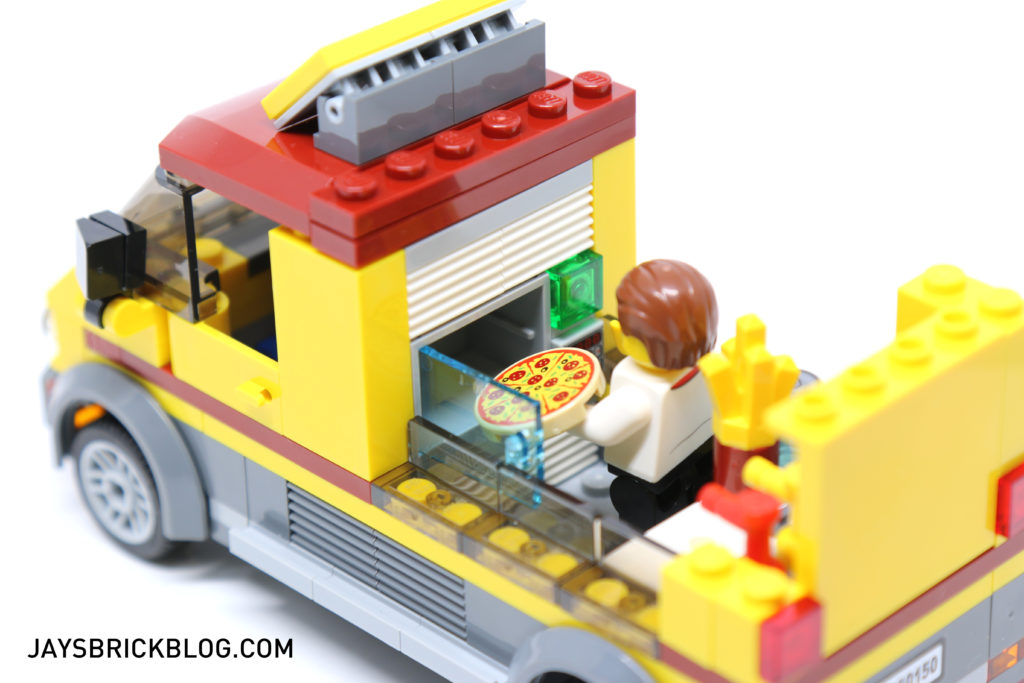 On the other side of the kitchen, we have a small, simple oven where the pizzas get finished off. Or it could be a microwave oven, which really makes me question the quality of pizzas.. 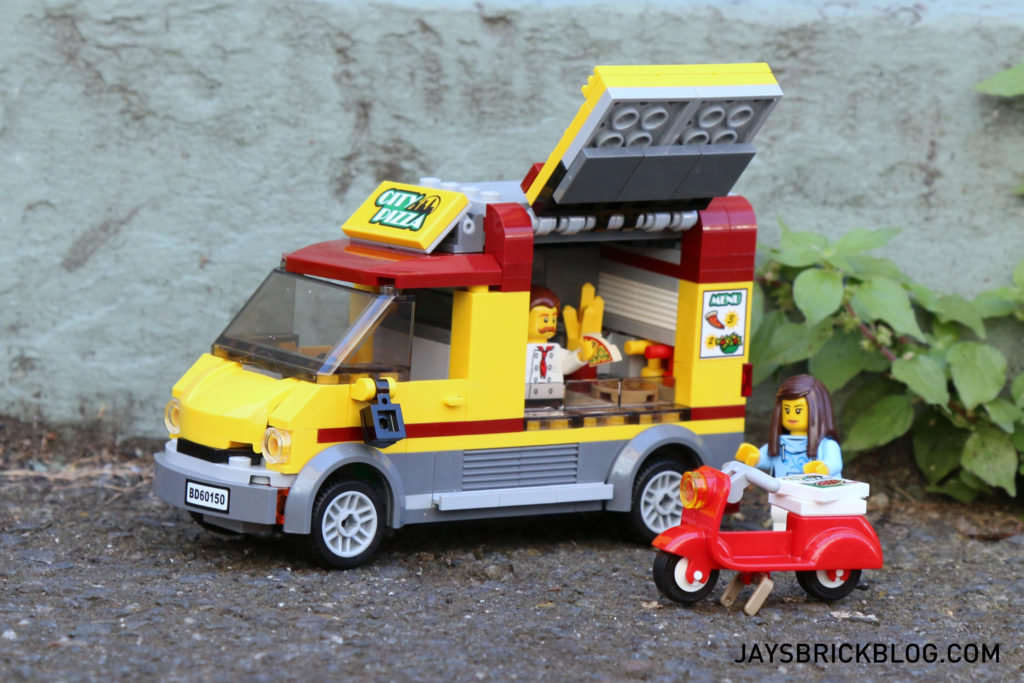 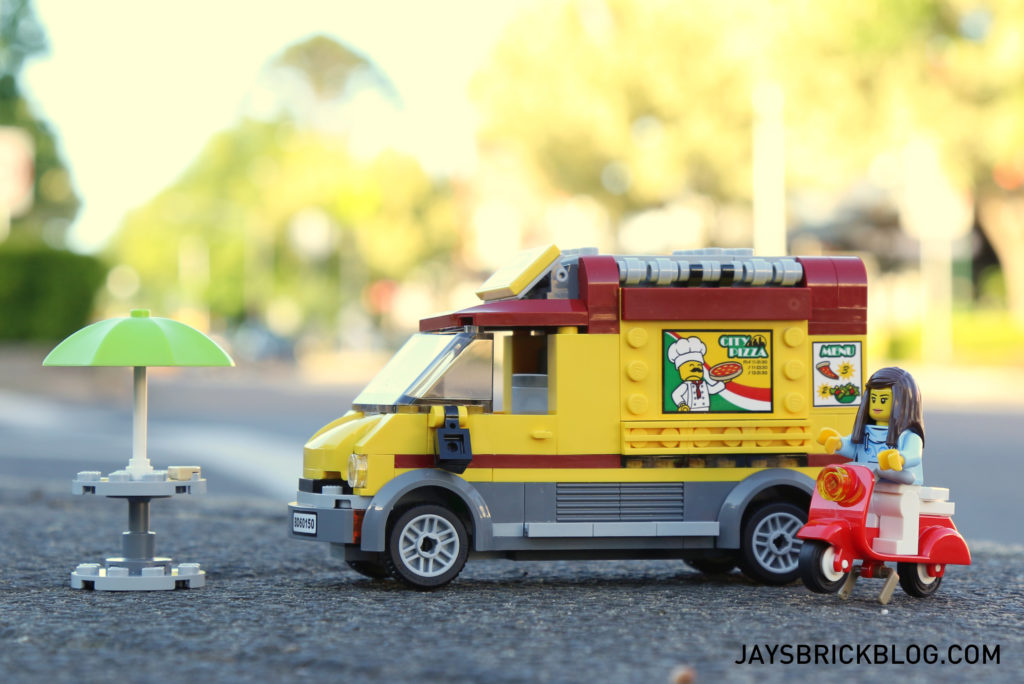 Final thoughts: The LEGO City Pizza Truck is an excellent set that’s charming, well-designed and perfectly priced. It fills a massive void in the LEGO City range – a regular civilian vehicle that isn’t tied to crime, or some sort of emergency disaster ; two issues that seem to plague LEGO city.

Food trucks have been in vogue for the past few years, and I’m glad that LEGO have finally caught on to the craze with this delightful set. It can easily fit into any LEGO City layout, or serve as the perfect accessory to a street of Modular buildings.

For such a small build, LEGO have crammed it full of neat features and details. It’s great design and the bright yellow exterior also make it a very attractive vehicle, that even works well as a standalone display model.

I do wish that they had included more Pizza pieces and slices, but it’s a pretty minor gripe.

The price point is also just right – it makes for a great impulse buy, and is a nice relaxing build that can be completed in under an hours. Most of all, no matter how you slice it, this set is just plain fun, and it has a very childlike allure to it.

There is no grand plot to save the world, no strife between good and evil, no nefarious criminals making off with a massive heist – just a simple Pizza chef making delicious pizzas out of his van for hungry LEGO City customers. 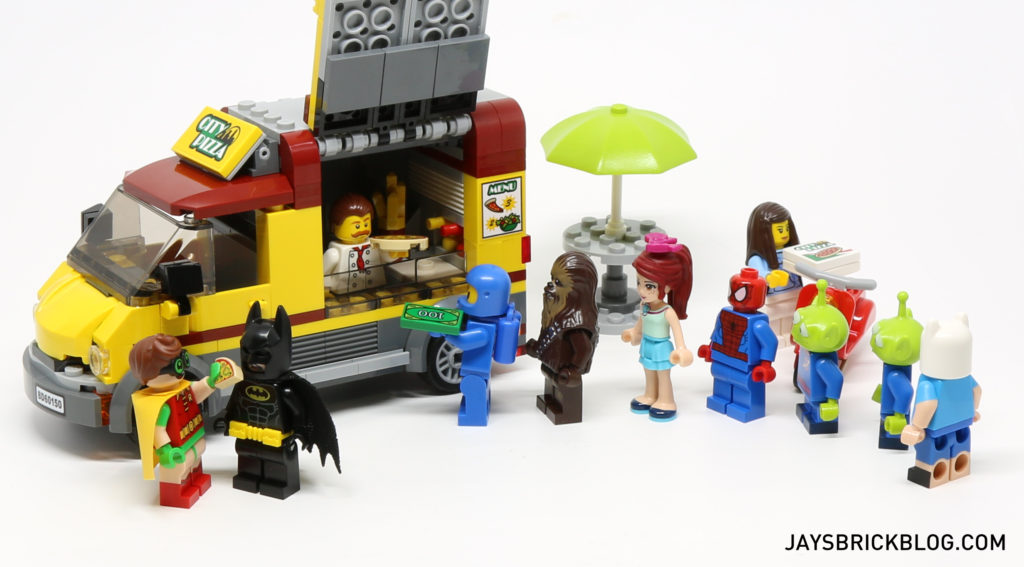 I love how that this set is so relatable – Pizza is a universally beloved food and nearly everyone is familiar with the concept of food trucks. A lot of LEGO fans feel that City is fast becoming a stale and boring theme, but if LEGO continue to design more sets like the Pizza Van that accurate mirror what city life is all about, I think that perception can be easily reversed.

60150 Pizza Van is great in so many ways – you’re treated with wonderful minifigures, a nice selection of rare-ish elements and most of all, a delightful build.

Which is why I’m awarding this set with my first 5/5 of 2017. It’s really a perfect set for all intents and purposes and is one of the best sets that you can buy this side of the year. Highly recommended and you’re bound to fall in love with the LEGO Pizza Truck.

Like a delicious, piping hot Margherita Pizza, this set is an instant classic and will not disappoint in the slightest.

Thanks once again for reading this review! I’m really looking forward to combining this set with the Friends Heartlake Pizzeria which I’m hoping to snag at a good price.

If you own the Pizza Van, let me know what you thought of it in the comments!

If you enjoy reading more LEGO reviews, please feel free to check out the Review Hub for more LEGO City reviews, follow me on Facebook or subscribe to the blog (on the right sidebar) to find out when new posts are published!