For my first review of 2018, I’ve opted to start a little small, and start with familiar territory, DC Super Heroes, or more specific in this case, The LEGO Batman Movie.

I couldn’t wait to get my hands on 70919 Justice League Anniversary Party the moment it was unveiled – the set is based on one of the more memorable (and funnier) part of The LEGO Batman Movie – where the Justice League are throwing an anniversary party but conveniently forget to invite Batman.

What drew me into the set was the light-hearted nature of the set, as well as the minifigures included, being a huge DC fan and all. Let’s dive into the review of 70919 The Justice League Anniversary Party! 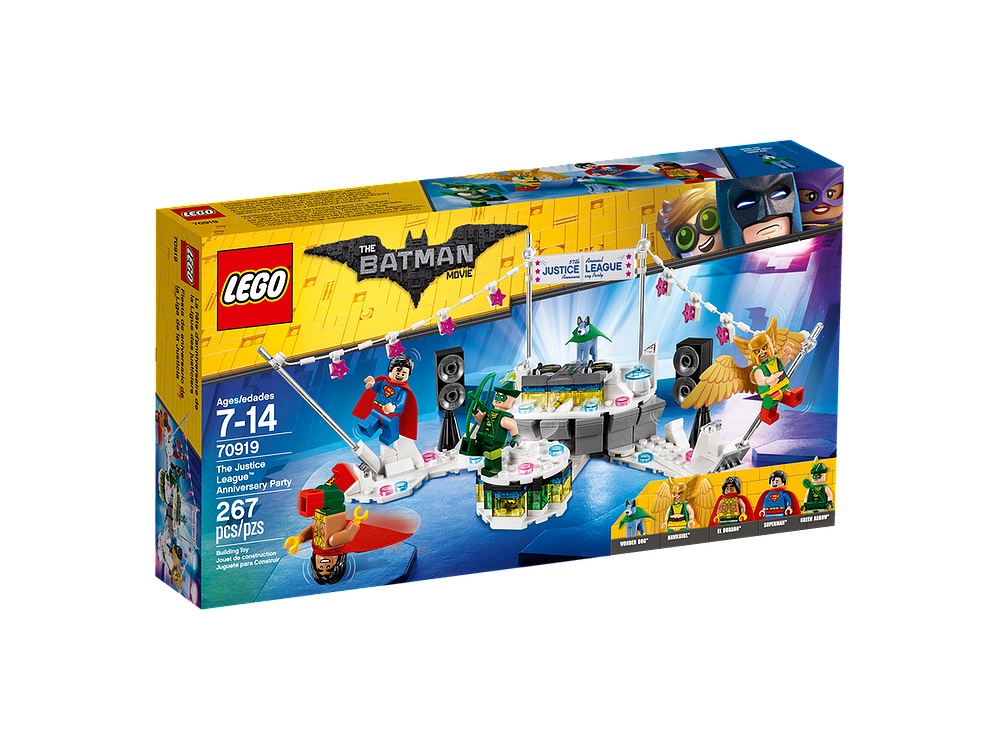 If you need a refresher on the scene this set is based on, check out the video above! With the release of Batman Movie Minifigures Series 2, we’re now able to almost re-create the entire scene, save for Samurai who most likely has gotten cut from the latest wave of LEGO Batman Movie sets.

For a US$30/AU$50 set, the number of minifigures is up to par from what you’d expect, but the bonus fact that all the minifigs are exclusive to this set helped win me over when deciding to buy it. 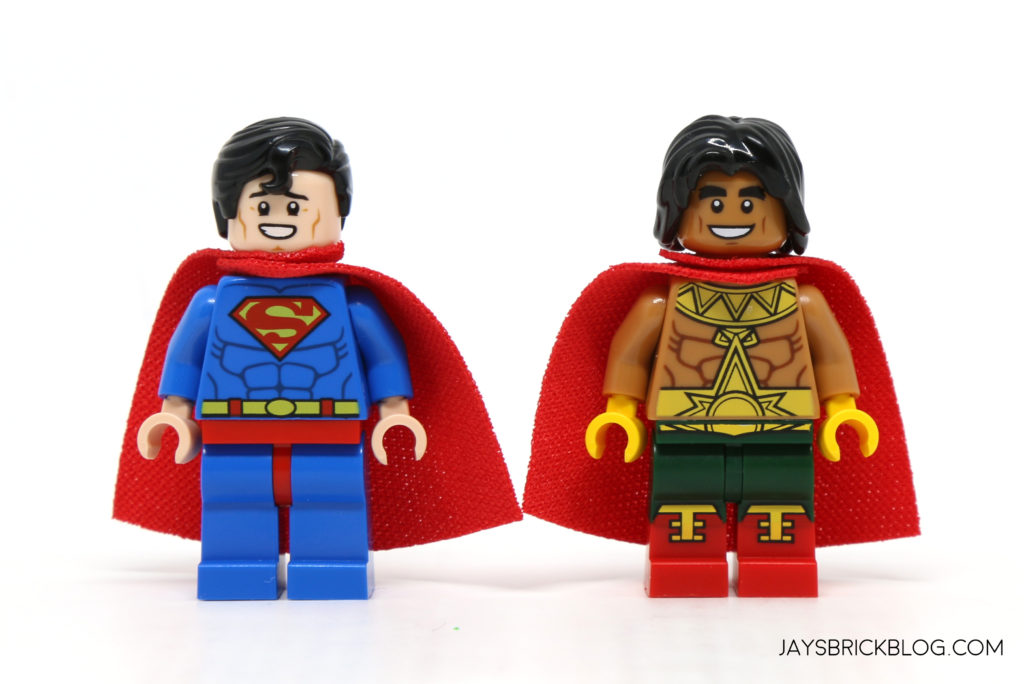 Here’s a closer look at Superman and El Dorado. Superman’s outfit is unchanged from the classic versions, most recently seen in the likes of 76040 Brainiac Attack which is practically the same as his debut in 2012 in 6862 Superman vs Power Armour Lex. I really would’ve loved a slightly updated design, but I guess with Superman’s iconic costume, the LEGO designers are of the “if it ain’t broke, don’t fix it” mindset.

We do get a brand new face for Superman, which is always good news. Voiced by Channing Tatum in the movie, Superman has more lighthearted and comical expressions such as this big sheepish grin you see above. We still get the same pronounced cheekbones and his signature hairpiece, but the new face really suits the nature of the set.

El Dorado is a character I was previously clueless about until this set but he is part of the Super Friends (kid-friendly Justice League) and is an Aztec/Mesoamerican superhero who derives his power from the Aztecs. I’ve got a soft spot for all things Aztec, Inca, and Mayans so I’m pretty pleased to get my hands on El Dorado.

I do like his nougaty skin-tone, which is still relatively rare in LEGO. He has a good natured smile, with very large eyebrows. I absolutely love the printing across his body and legs – looking at the wiki article, the design is almost identical and I especially like how well aligned the printing is between his torso and legs.

His large golden necklace and extra-large belt buckle are both really attractive features and just the nature of how obscure he is, and his connection to the Super Friends makes me quite happy to own him. 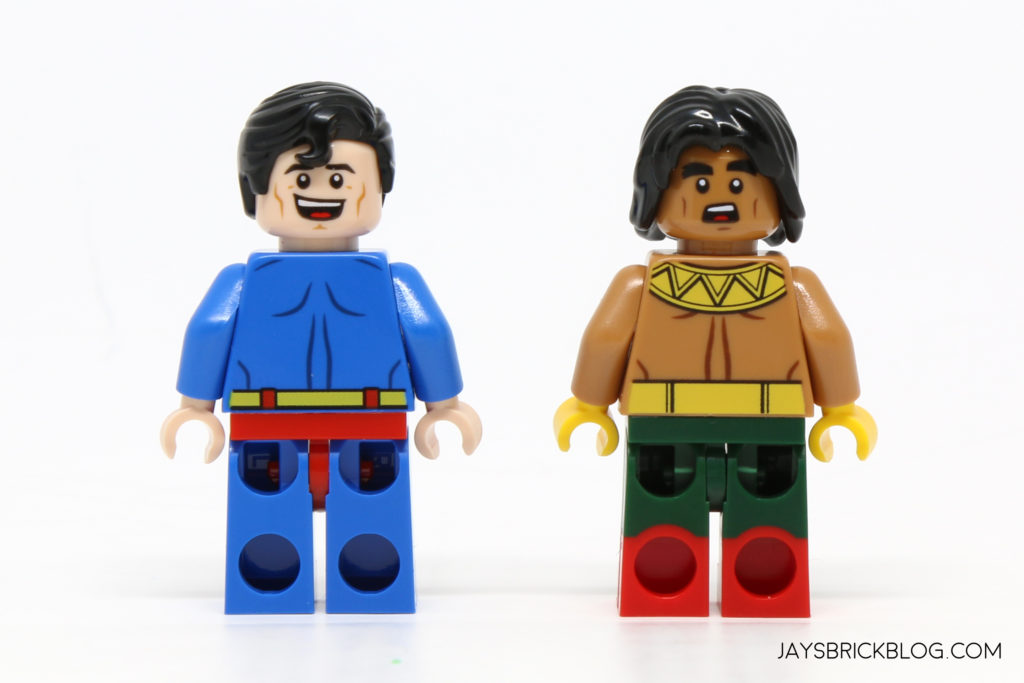 Here’s a look at their alternate faces and back printing, once you remove the red spongy capes which are identical to each other. Superman has a large goofy smile and El Dorado has a confused, exasperated expression. 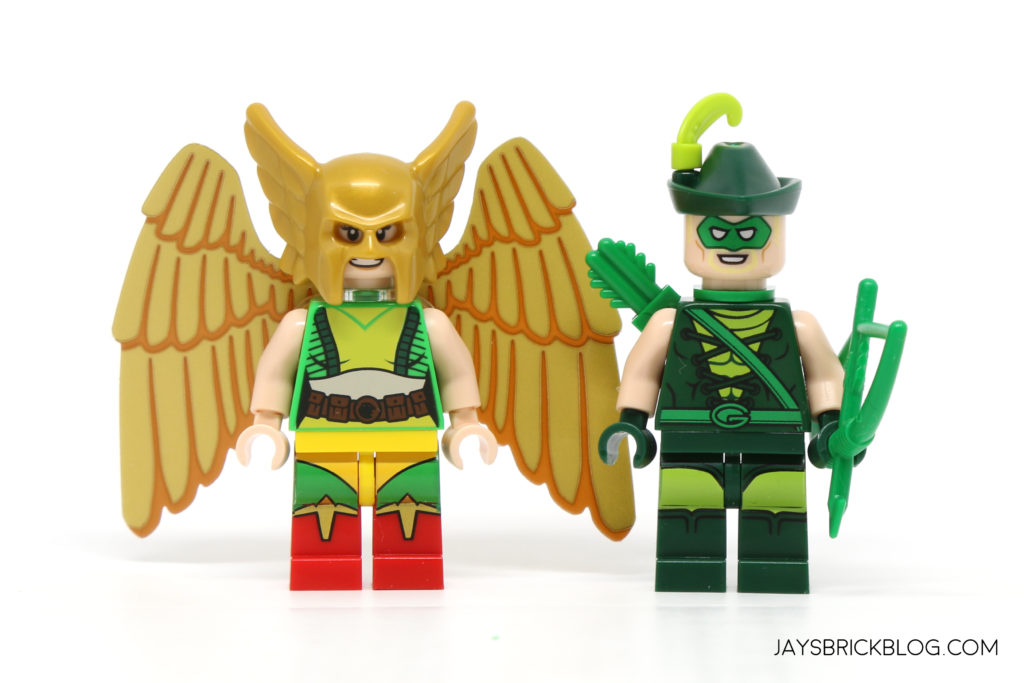 The main draws of the set, however are Hawkgirl and Green Arrow. Hawkgirl has been a long time coming as Hawkman has been a lonely birdperson since he first made an appearance in 2015’s Darkseid Invasion. Hawkgirl features in her retro-style outfit, which seems to blend her Silver Age look with her more recent appearance with the bare midriff.

She comes with Hawkman’s large pearl gold bird-shaped mask and plastic wings which have a slight design update which you’ll see later. While it’s cool to see the return of the headpiece, I feel that it’s not the best execution for Hawkgirl – she should retain the mask, but the designers should’ve printed some black markings on the mask for extra accuracy to her comic book costume.

That said, in the movie, her helmet is also plain, so I guess they were trying to stick to the source material. 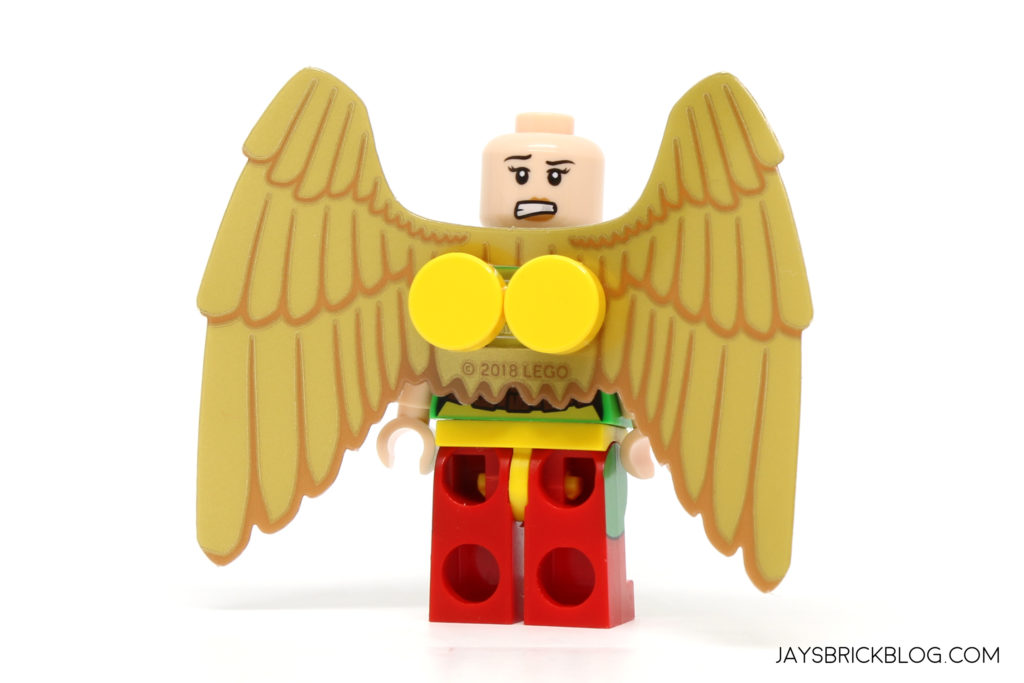 Here’s a look at Hawkgirl’s alternate face which has a slightly disgusted or apprehensive grin. My only qualm with her torso printing is that her midriff printing is a little dull and doesn’t really match her flesh-coloured arms and face – a perennial issue when LEGO tries to print the flesh colour on torso with a different base 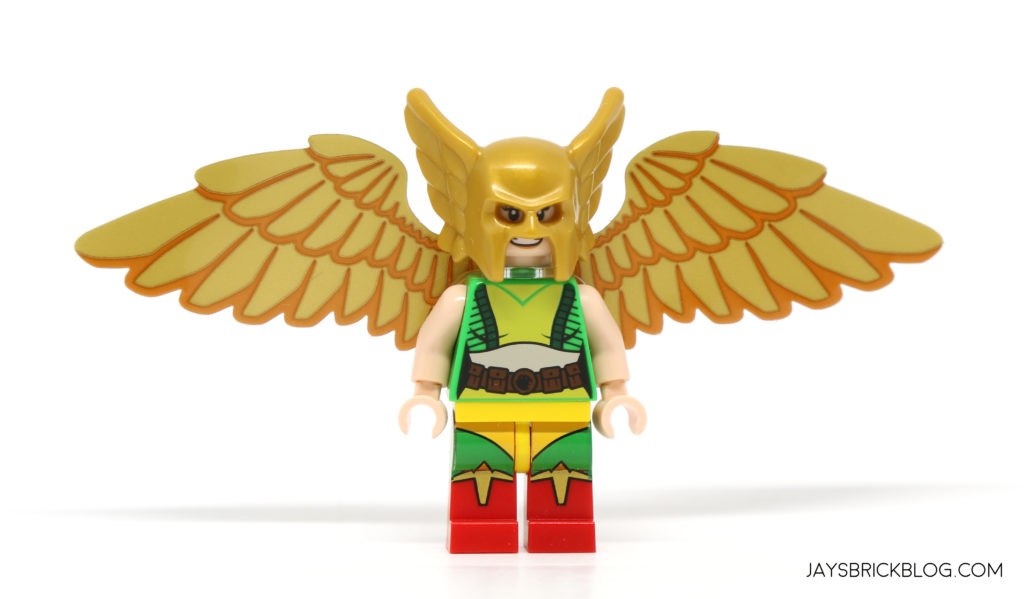 She comes with two wings, and this is how the outstretched version looks. Another disappointment is her midriff printing, which doesn’t quite match her flesh-coloured arms and head. It’s 2018 and LEGO still has issues when printing flesh or yellow coloured body bits on torsos that have a different base colour.

Still, it’s great news for DC fans like myself now that we finally have a Hawkgirl to go with our Hawkman. As you can see above, the new wings have a much better design and aren’t as dull compared to Hawkman.

She doesn’t come with a weapon, which I guess is movie-accurate but it shouldn’t be too hard to equip her with a mace. 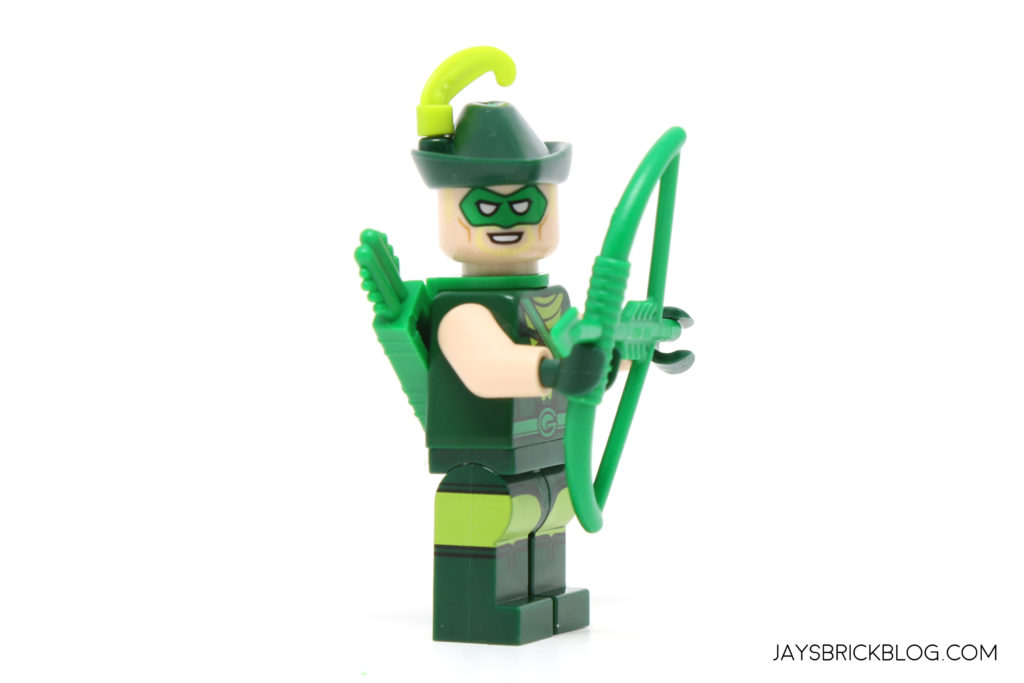 The classic Green Arrow minifigure is a treat in so many ways. Forget the gritty Stephen Amell Green Arrow, this is Oliver Queen at its best with his classic Robin Hood-inspired look. I especially love his Bycocket hat and new lime green feather, as well as his classic tunic with the deep-V on his chest. The green “G” belt buckle is also a nice touch.

Green Arrow’s best feature, however is his faint blonde beard. No moustache, but I’m happy that we get a comic-accurate Oliver Queen face. In addition to the fantastic colour scheme, we also get a brand new bow in green which has never been done before and adds so much to the overall look. 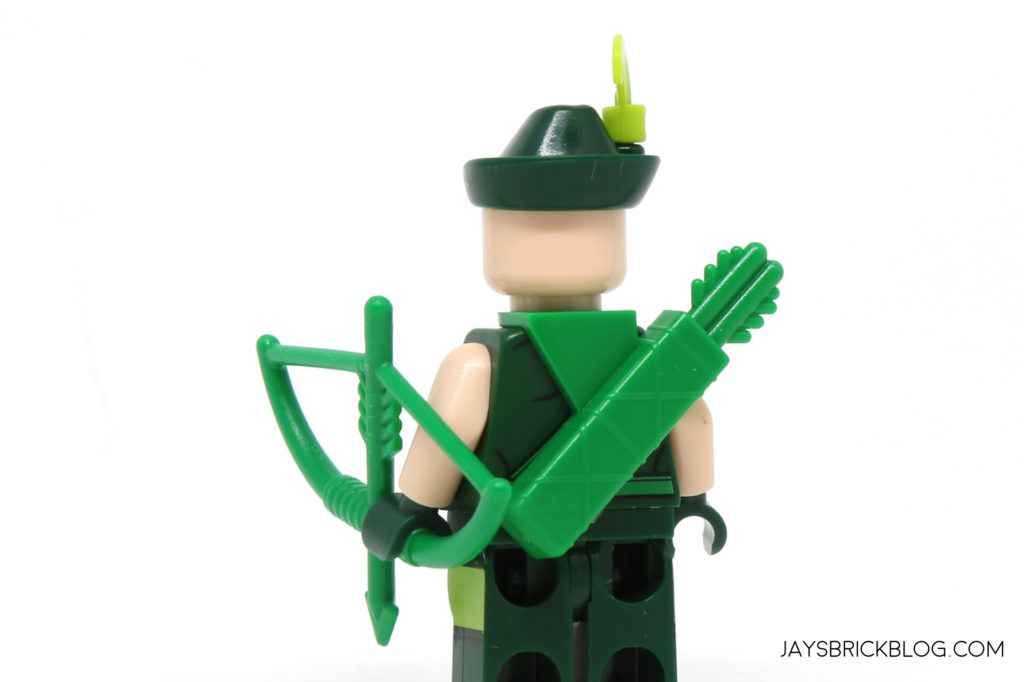 Apart from the bow, Oliver Queen also comes with a brand new green quiver to match the look. While not a wholly new accessory, I’m really glad that LEGO chose to recolour the bow and quiver which really takes the Green Arrow minifigure up a notch in terms of accuracy.

Unfortunately, Green Arrow doesn’t have an alternate face, which probably would’ve looked a little weird anyway if you saw a face peeking from behind. 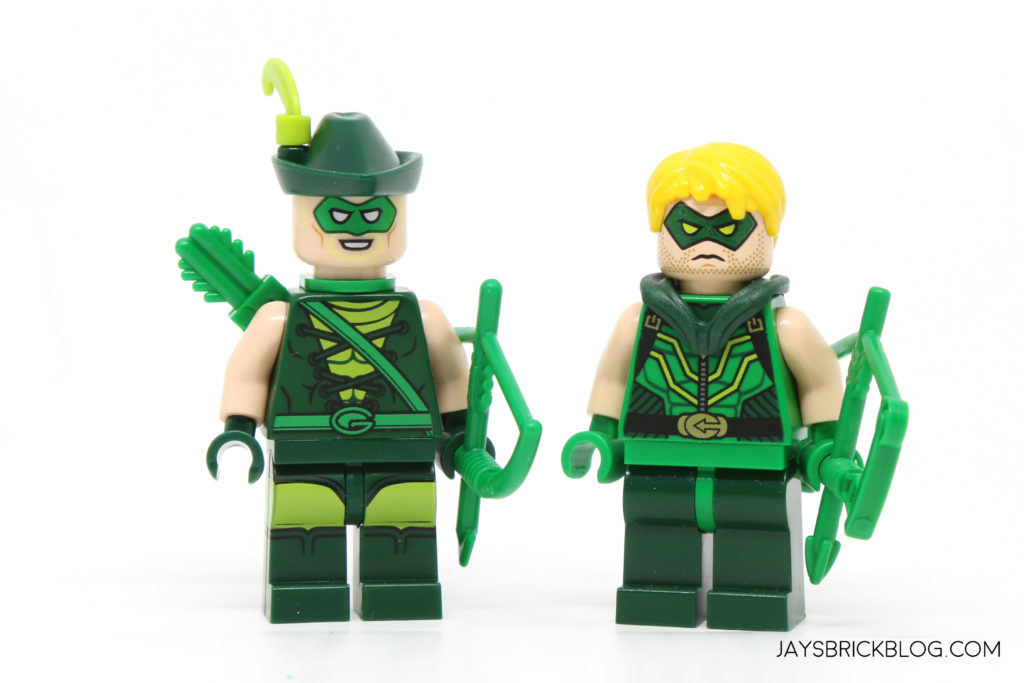 Here’s a comparison with the modern Green Arrow from Darkseid Invasion. Isn’t the classic one so much better? 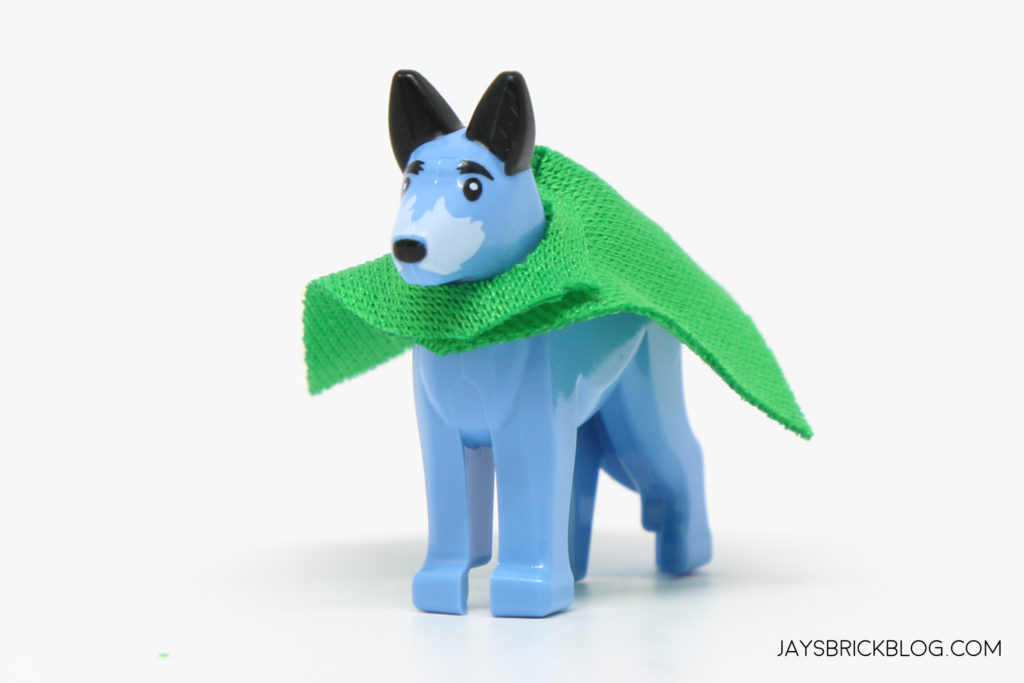 Last but not least is Wonder Dog who is part of the Super Friends. He doesn’t have any super powers or crime fighting skills, and is just a regular old dog except that he has a cape. 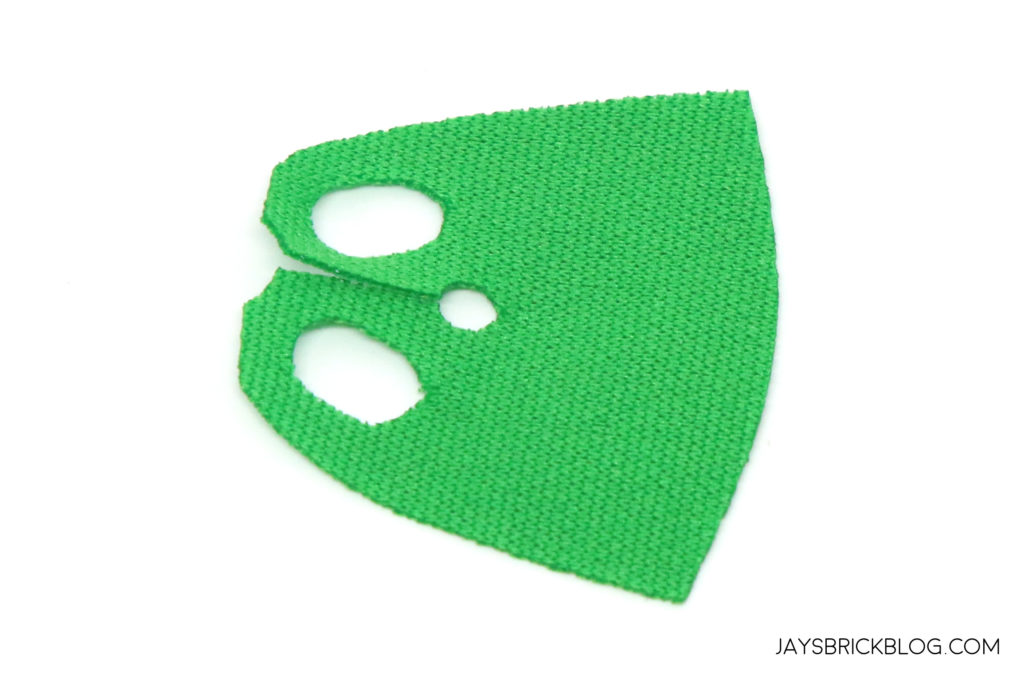 I really love that LEGO designed and produced a cape exclusively made for dogs – you can see the enlarged neckholes above.

I had no idea about Wonder Dog’s existence prior to this set, and when doing my research, I did find it pretty funny that he didn’t have any powers. I guess mad DJ skills could count as a super power?

That said, I do like his blue coat and the sharp printing on his head. It’s such an outlandish colour for a dog that I’m glad to add it to my LEGO animal collection. 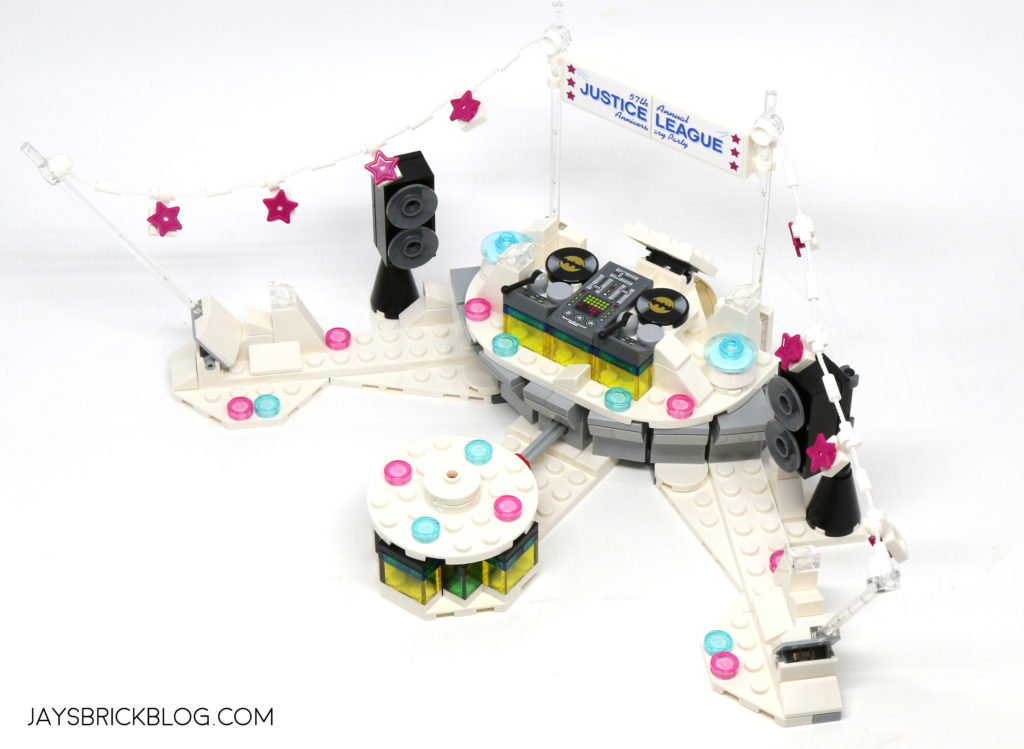 The set itself is as simple as it comes. The build is mostly white elements, a mix of plates and slopes mixed in with a decent number of translucent bricks. There was nothing really challenging or interesting with the build but it went by pretty quickly.

You get a massive deck for the DJ, sitting beneath the Justice League Anniversary Party sign, a rotating stage in front, and two narrow areas that extend from the DJ deck at an angle.

The translucent bricks really pop against the backdrop of mostly white bricks, and combined with the bunting, does a decent job at creating a festive party vibe. 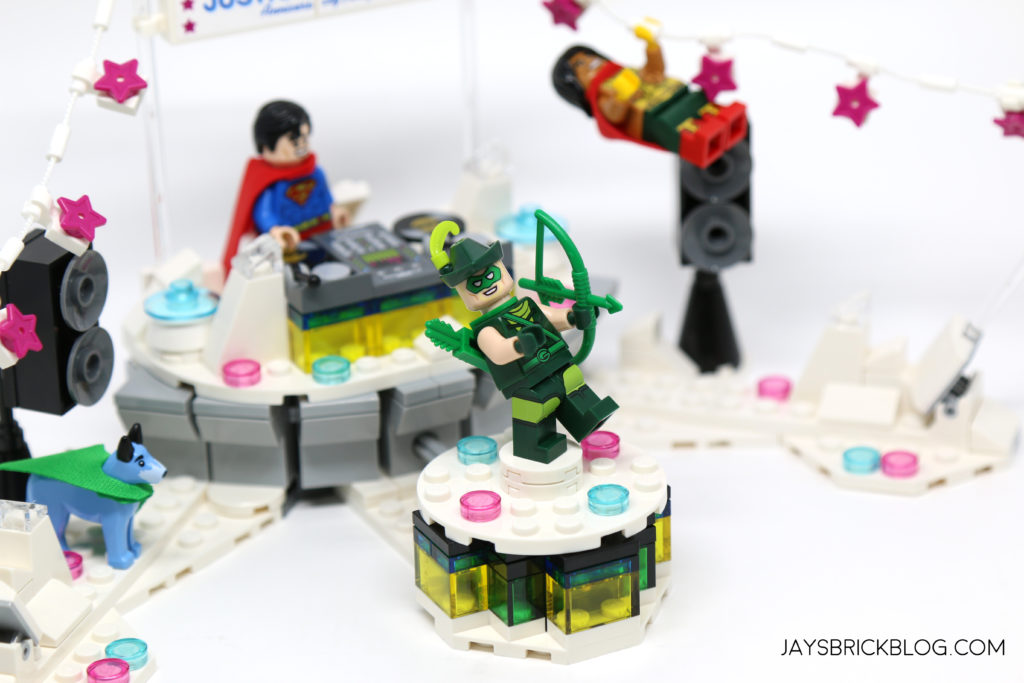 Play features are pretty sparse in this set, as it’s mostly meant to function as a display piece. The dancing stage at the front where Green Arrow is standing on has a small pedestal that you can rotate by twisting a knob behind.

It provides a minor, but thematic play function to an otherwise static set. 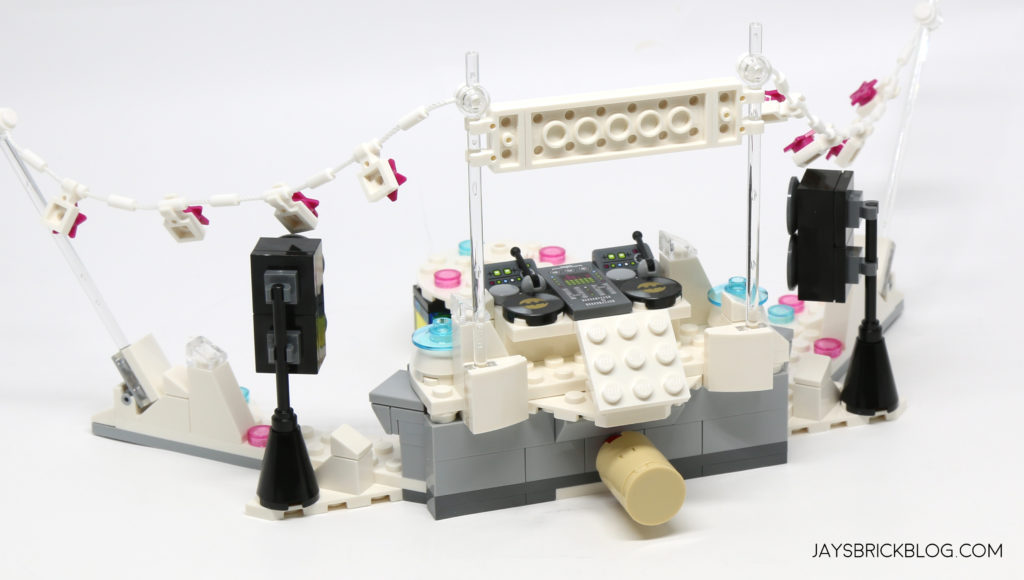 Here’s how the set looks from behind where you can see the knob I mentioned earlier. There is also a 3 x 3 plate where you can place Wonder Dog to assume his DJ duties. 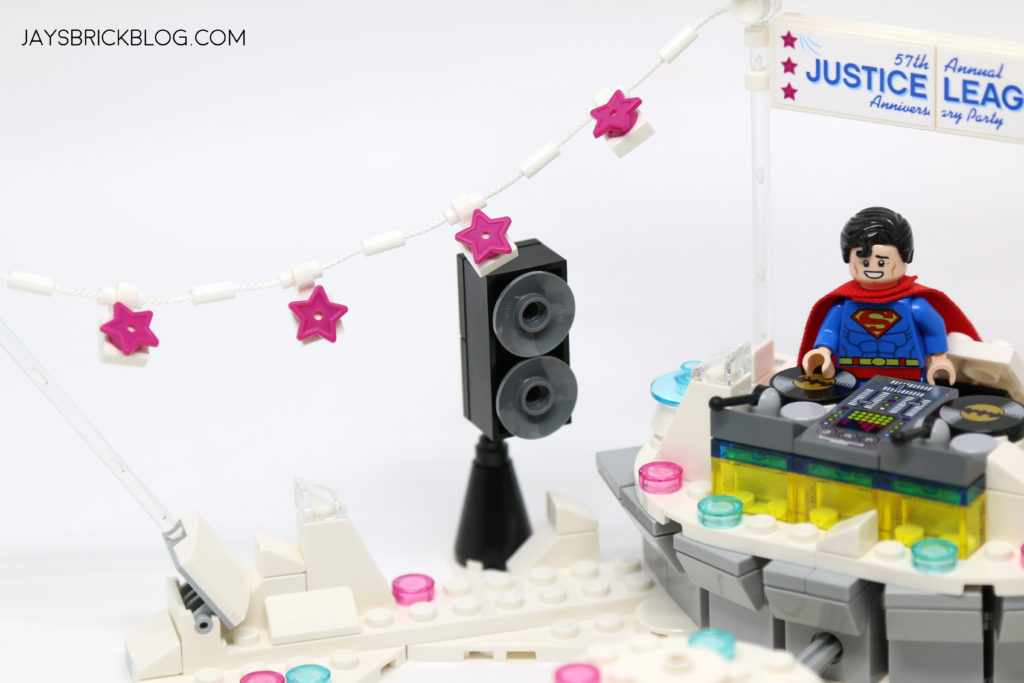 I quite like the simple design of the speakers that flank the DJ stage. 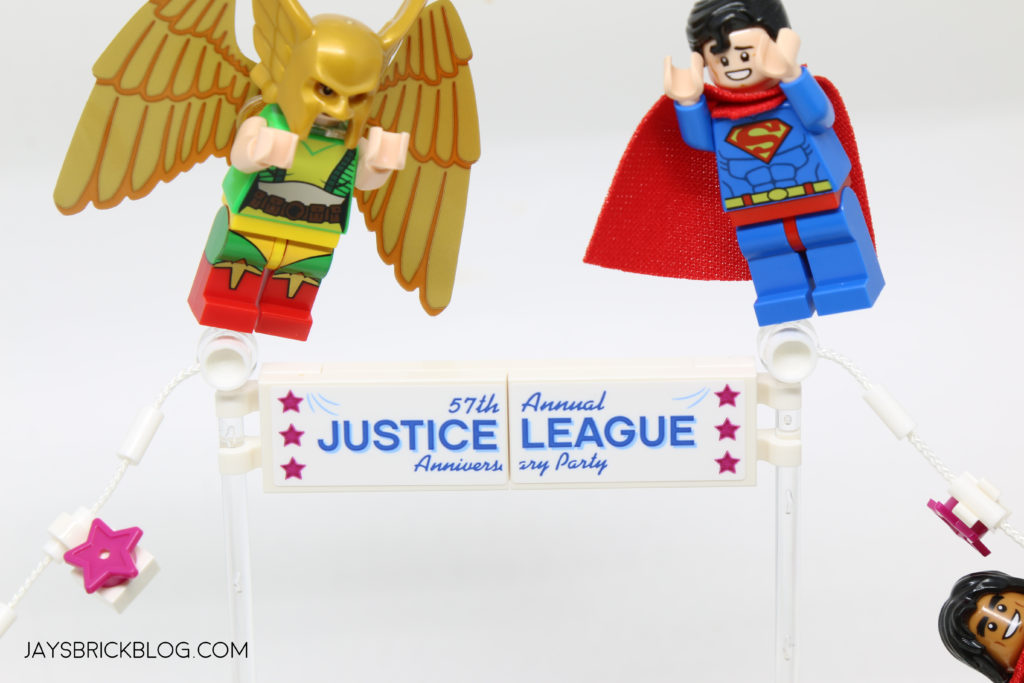 The Justice League Anniversary banner is also a simple affair – you get  two stickers affixed to tiles, which have the unfortunate effect of dividing the word “Anniversary”, making it look quite unsightly. They should’ve just kept Anniversary to one side and Party to the other. 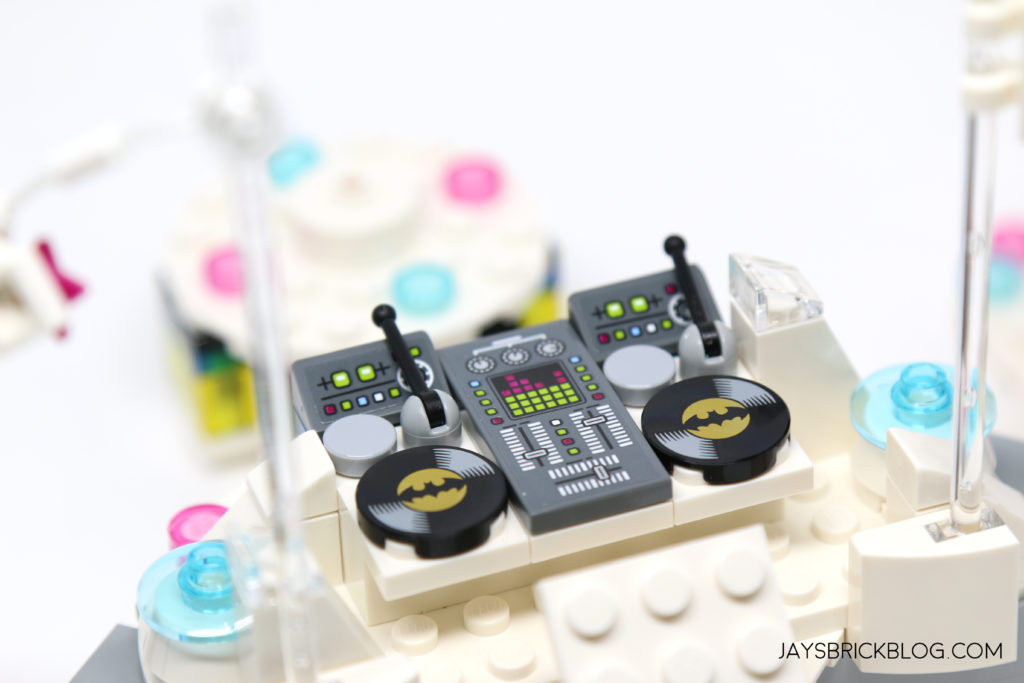 The most interesting part of the build is the DJ deck itself. Through the use of stickers, we get a large equaliser panel, complete with different dials and sliders. While I usually dislike stickers, this one is useful enough for a different bunch of applications beyond this set. There are also two 2×1 cheese slopes with more lights and buttons.

There was one surprise I wasn’t expecting to encounter – see the two Batman vinyl discs? They’re printed! And we get two of them! Printed elements are always welcome, and when they’re Batman-themed, it’s extra special. 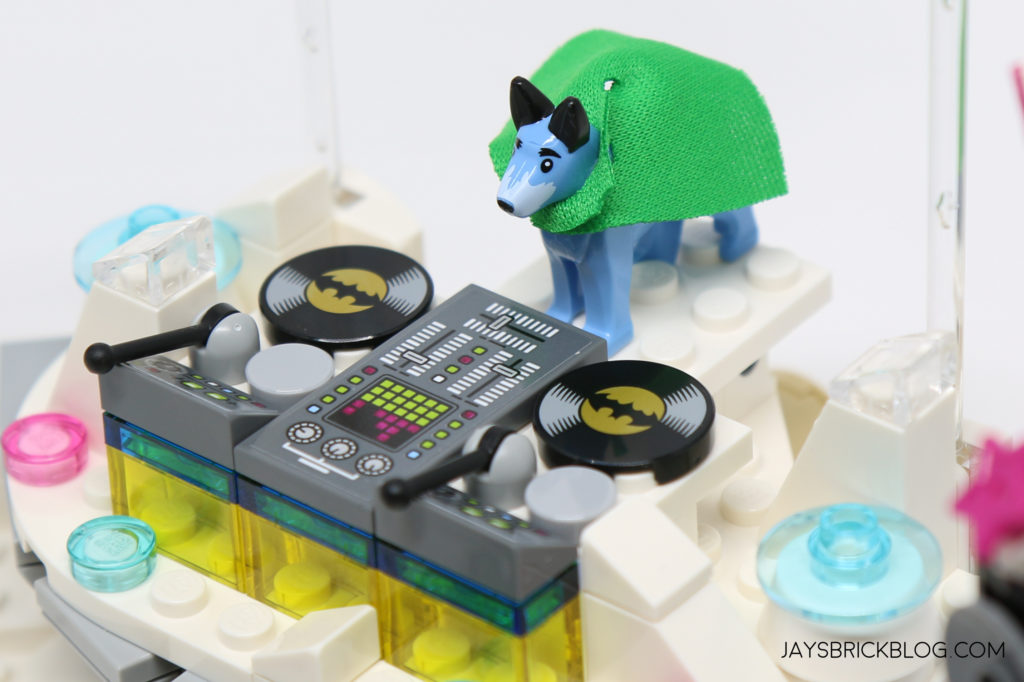 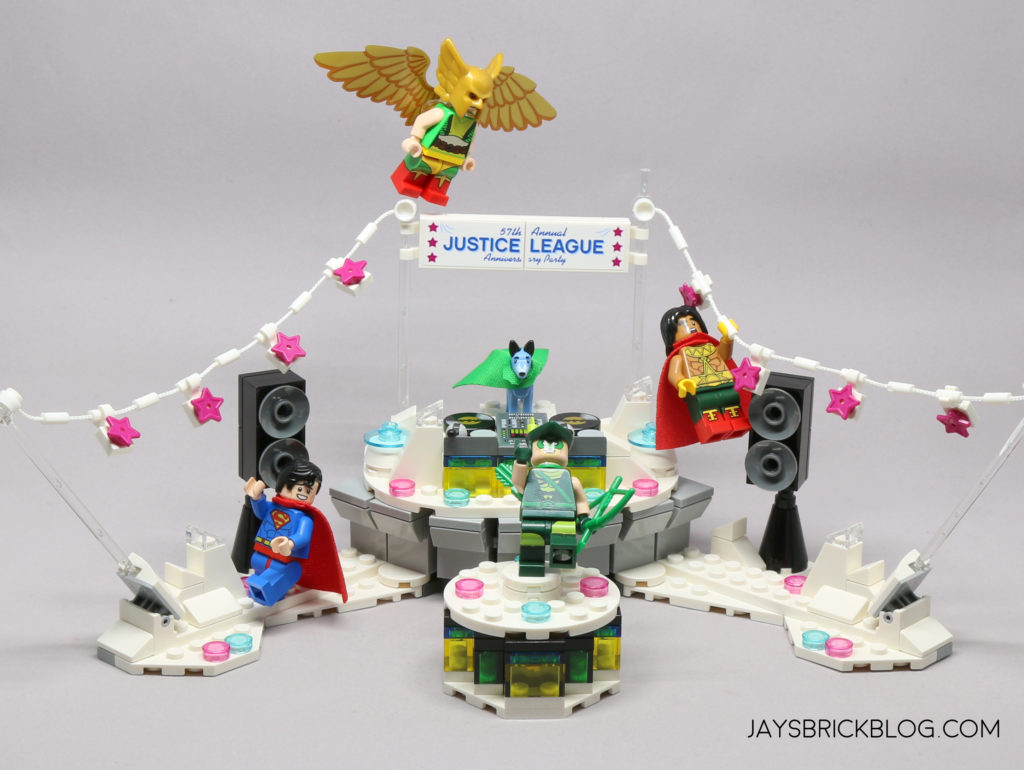 The minifigures do not disappoint, especially if you’re an ardent DC Comics and LEGO Batman Movie collector like me. The highlights are obviously the classic Green Arrow as well as the long-awaited debut of Hawkgirl. Green Arrow is one of the best DC minifigs released in a while, so if you’re a fan you won’t be disappointed at all.

Rounding up the crew is Superman with some goofy new facial expressions, and fringe character El Dorado and Wonder Dog sweeten up the overall package.

The actual build is nothing to shout about. It’s a little boring and unimaginative, but there’s one small upside – it makes for a decent base to pack with other Justice League/Super Friends minifigures. You can do a lot with it such as recreate scenes from the movie, as well as throw your very own Justice League Party.

That said, as a space-constrained LEGO fan, I don’t know if this set will stick together for long as there are more attractive sets to display. I don’t see this set passing the test of time outside of the minifigures.

It’s a decent set, especially if you can get it on sale (AU$40 is the price I paid, which I’m happy with) but if you’re not into DC Comics characters, you can skip this set. If you’re a fan like me, you absolutely cannot go wrong with the great selection of minifigures in this set.

Thanks for reading this review, I hope you enjoyed it! Be sure to check out the Review Hub if you want to browse through some of my older reviews. I also have a Facebook page that you can follow where I share other LEGO-related content. Don’t forget to subscribe if you’d like alerts in your inbox of new articles and reviews.

Are you planning to pick this one up, or have you built this set? Let me know what you thought about it in the comments!