Back-to-back LEGO Star Wars reviews on the blog? You bet!

You can tell that I’m really impressed by the new wave of Summer 2017 Star Wars sets as I’m following up my review of the Bounty Hunter Battle Pack (which I absolutely loved) with the other set that I’ve been really hyped up for – 75182 Republic Fighter Tank.

The main reason why I was drawn to 75182 Republic Fighter Tank was purely because the set contains one of my favourite Jedi Masters – Aayla Secura!

She’s legitimately one of the most bad-ass Jedi and I was really happy that LEGO have released a contemporary non-cartoony version in a relatively affordable set. The last time Aayla Secura was available in a LEGO set was way back in 2010’s 8098 Clone Turbo Tank, so it’s about the right time to get an updated version. Bonus points for it being in a fairly inexpensive set!

Let’s jump straight into the review of 75182 Republic Fighter Tank! 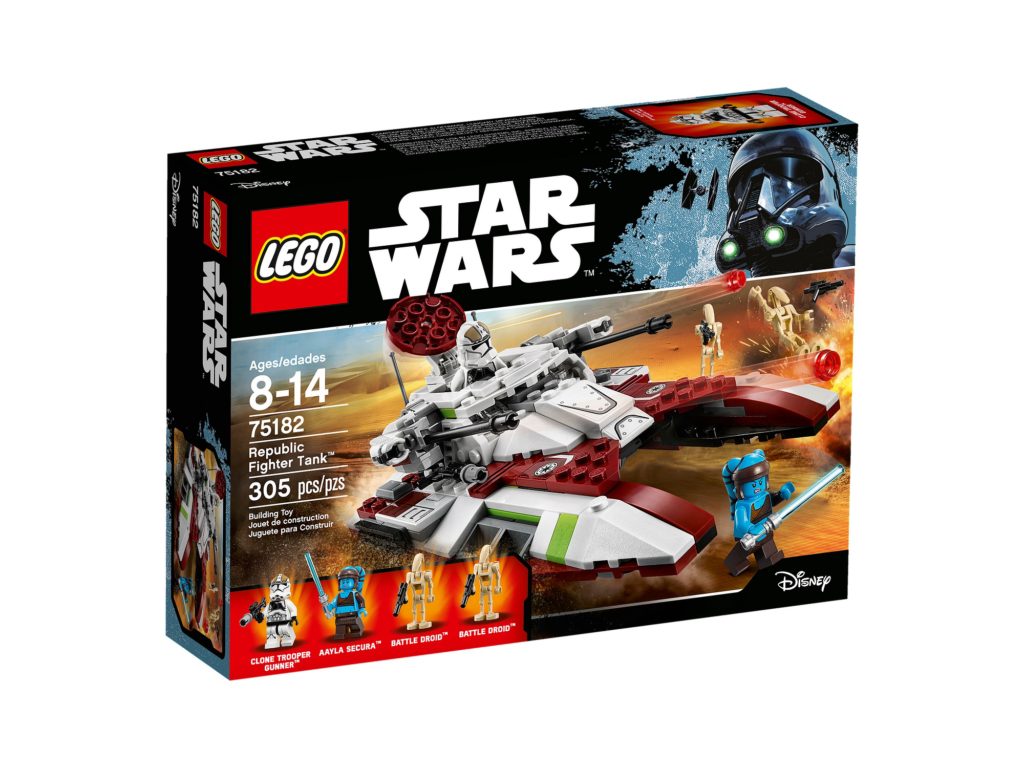 Yes, this set is from the prequel era but I’ve had a recent change of heart when it material from that era. Firstly, I’ve come to fall in love with the entire era, thanks to the fantastic Clone Wars TV series which I started watching last year, I’ve gained a newly found appreciation for Anakin, the Clones and everything in that period between Episode 2 and 3.

I highly recommend watching it (it’s on Netflix) but be sure to follow the Ultimate Episode Order. I also attribute r/prequelmemes on Reddit for helping me develop a much more light-hearted perspective on the Prequels.

It’s pretty uncommon for LEGO to take on sets that haven’t had a lot of airtime in the movies or TV series. 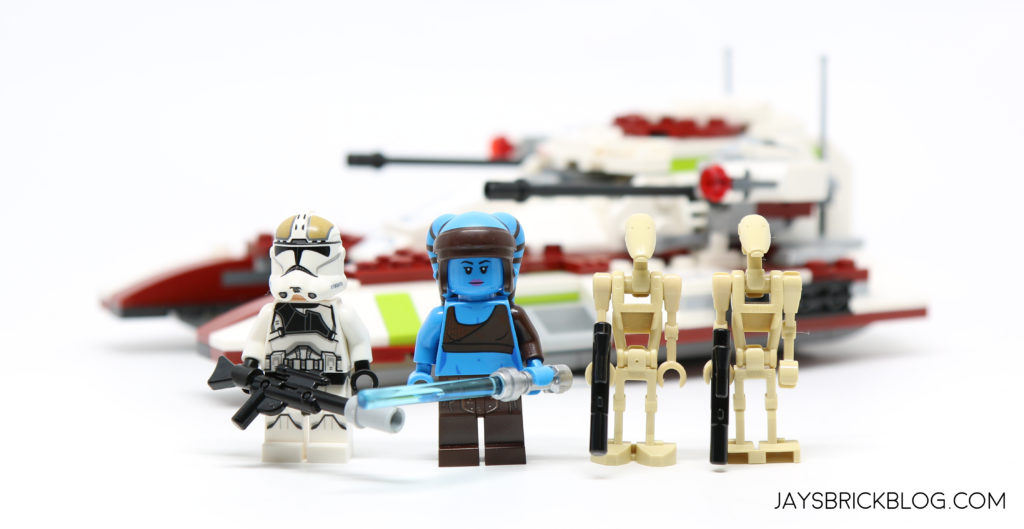 Let’s take a look at the 4 minifigures included in the set. Accompanying Aayla is a Clone Trooper Gunner and two Battle Droids. It’s a decent spread and you get all the essential character archetypes that you’d expect from a Clone Wars-era set. 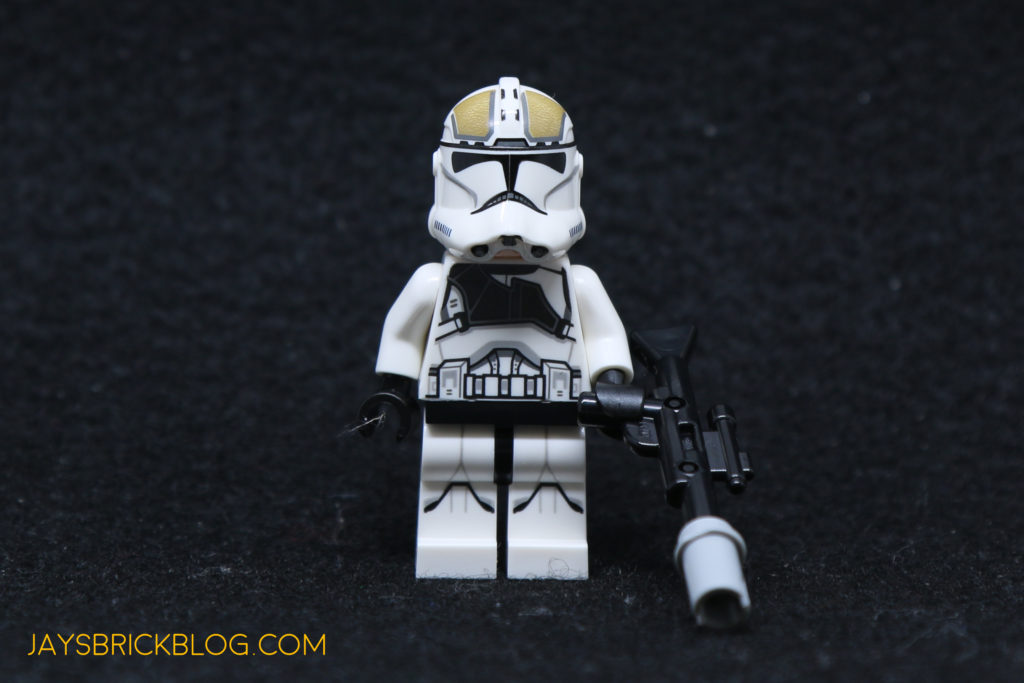 First up is the Clone Trooper Gunner, which is exclusive to this set and a brand new variant of Clone Trooper. The Gunner as his name suggests has a more specialised role and is identifiable by the unique printing on his helmet which has some tan-coloured patches.

The Clone Trooper Gunner’s torso also has a black harness of sorts stretched across his chest. He comes with a blaster rifle which has a short technic pin attached to the tip. 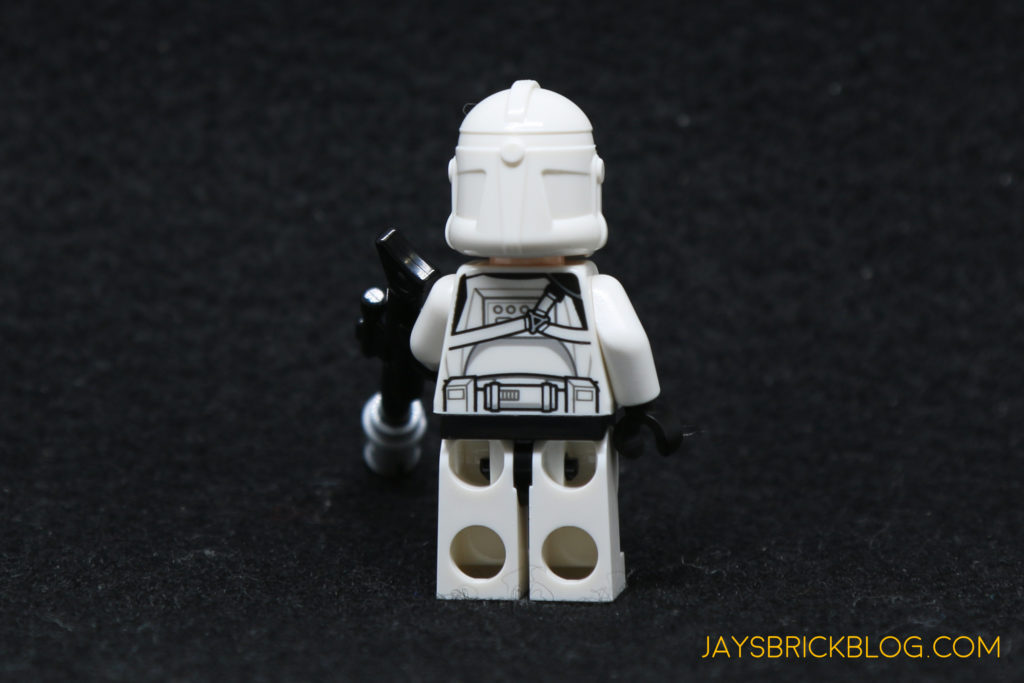 Here’s a look at the Clone’s black printing.

I don’t have the largest collection of Clones, but for those that collect them, the Clone Trooper Gunner would be a fine addition to their collection. I mostly appreciate the fact that we get a unique Clone Trooper in this set, instead of a generic Clone which helps beef up this set’s perceived value. 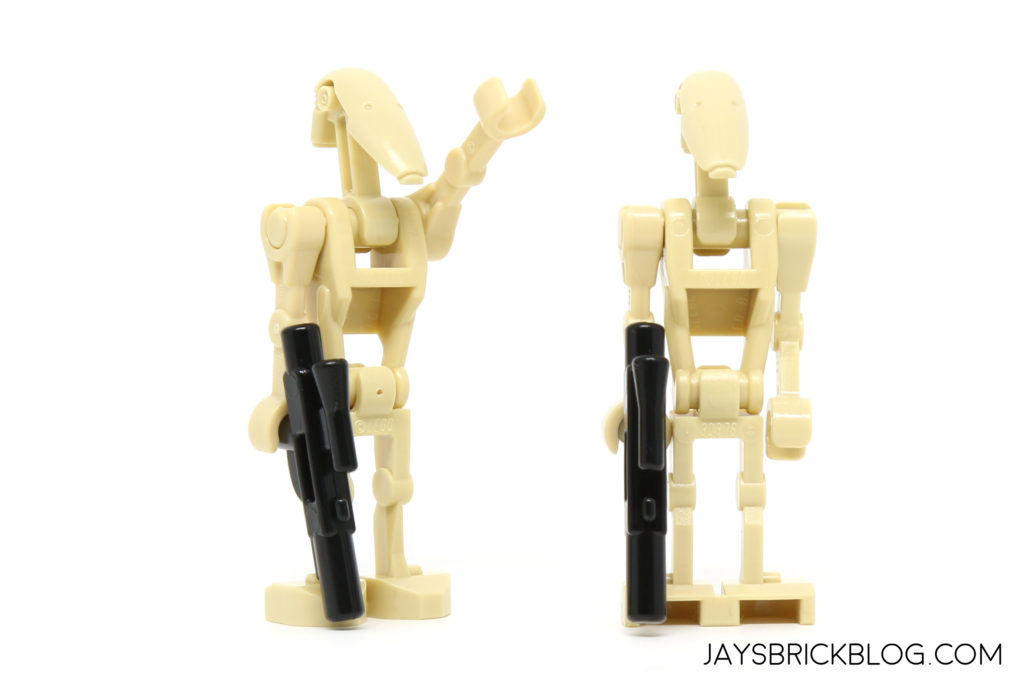 Also included are two Battle Droids, or Clankers as they are commonly known among the Clone Troopers. They’re your standard issue Battle Droids so there’s nothing particularly new about them. More Battle Droids are always useful as your Jedi Masters are going to need plenty of cannon fodder to mow down. 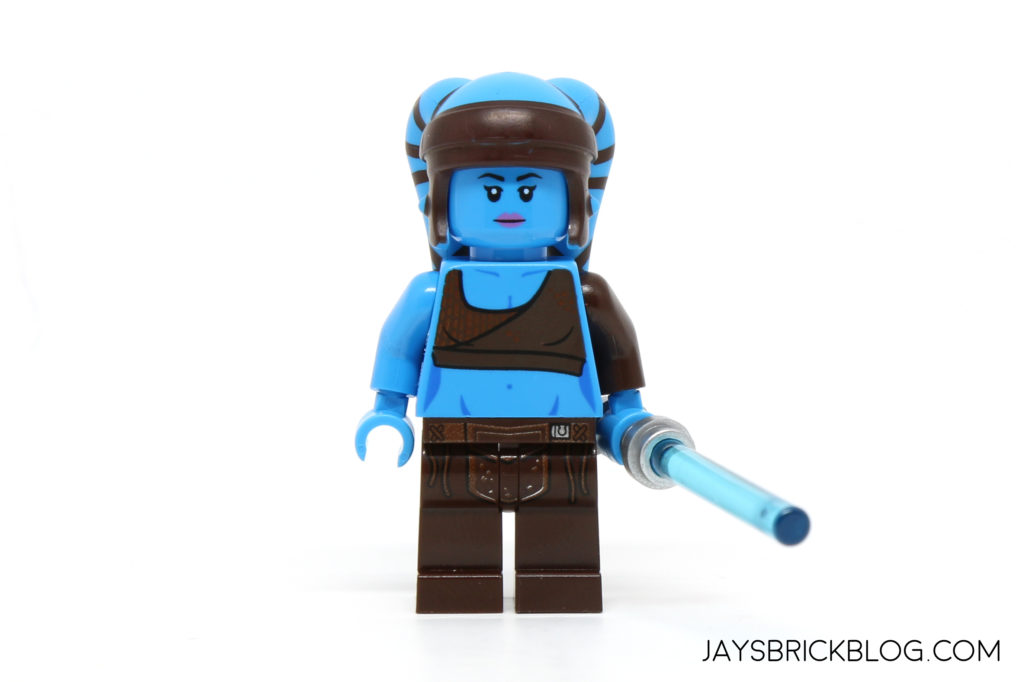 The star of this set is none other than Aayla Secura, a femal Twi’Lek Jedi Master and General during the Clone Wars. She’s one of my favourite Jedi from the Clone Wars, mostly because she radiated strength and confidence in her fighting skills – her presence whenever she appeared on-screen was always one of calm, power and raw tenacity.

Her minifigure gets a nice upgrade over her first iteration, which had those unnervingly large “anime-eyes” that were present in Clone Wars characters from that era. She’s attired in a simple brown leather tube top and pants.

True to her Twi’Lek roots, she isn’t afraid to show off a bit of skin. 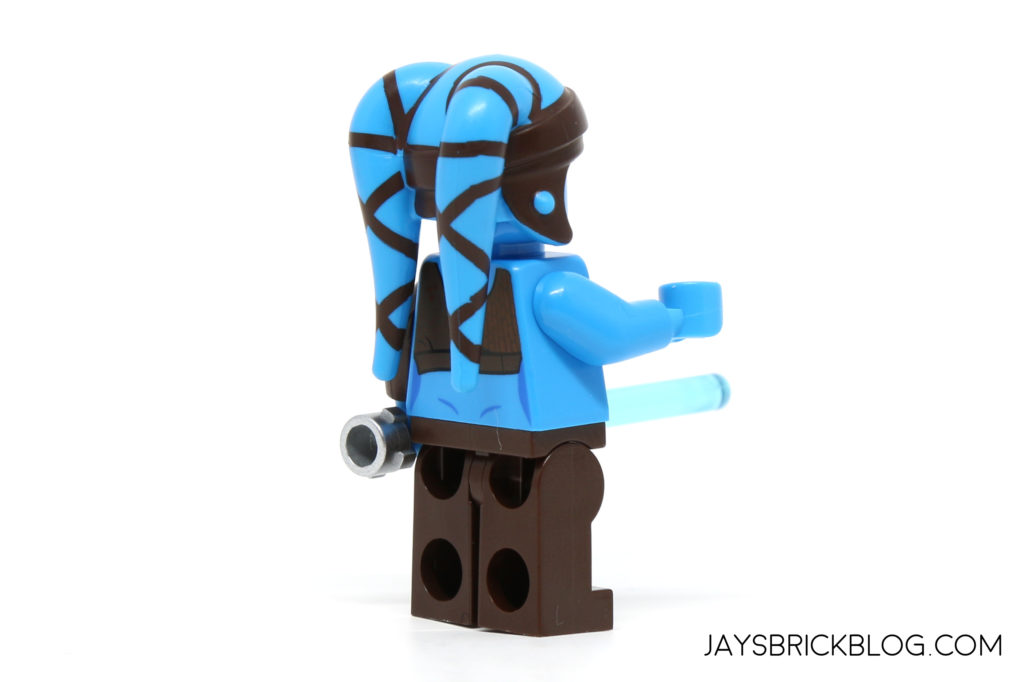 The Twi’Lek’s signature head tentacles are her most striking feature and are covered with brown decorative patterns. Here’s a better look at her headpiece. 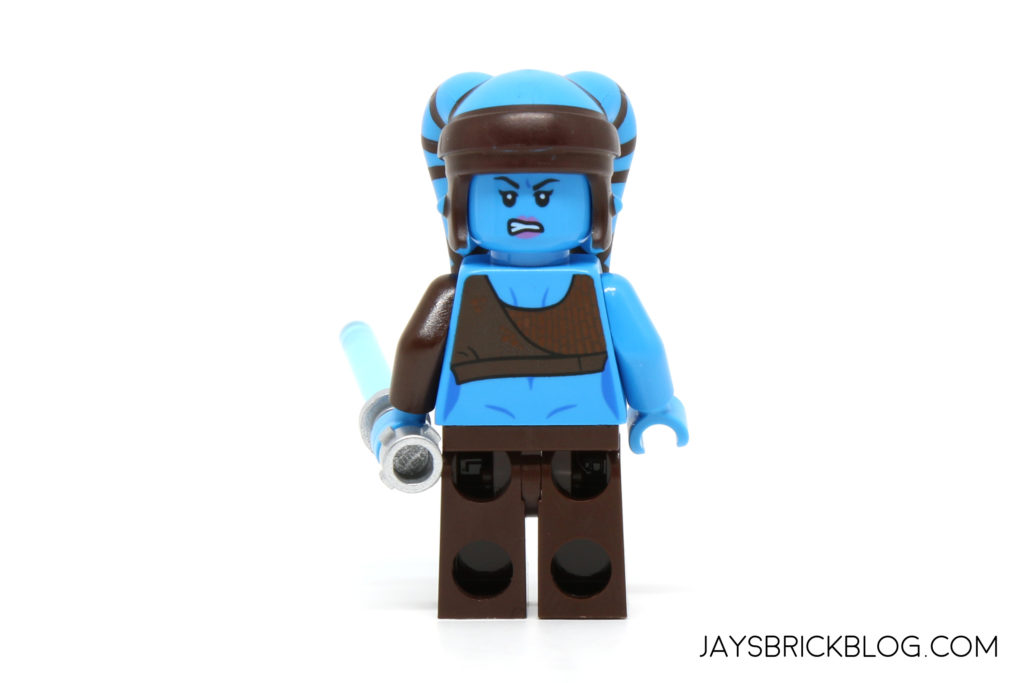 Here’s a look at Aayla’s alternate face which has an angry expression. Here, you can also see her back printing. I do like some of the most subtler details such as the lines on her lower back (and midriff) which are rather provocative. 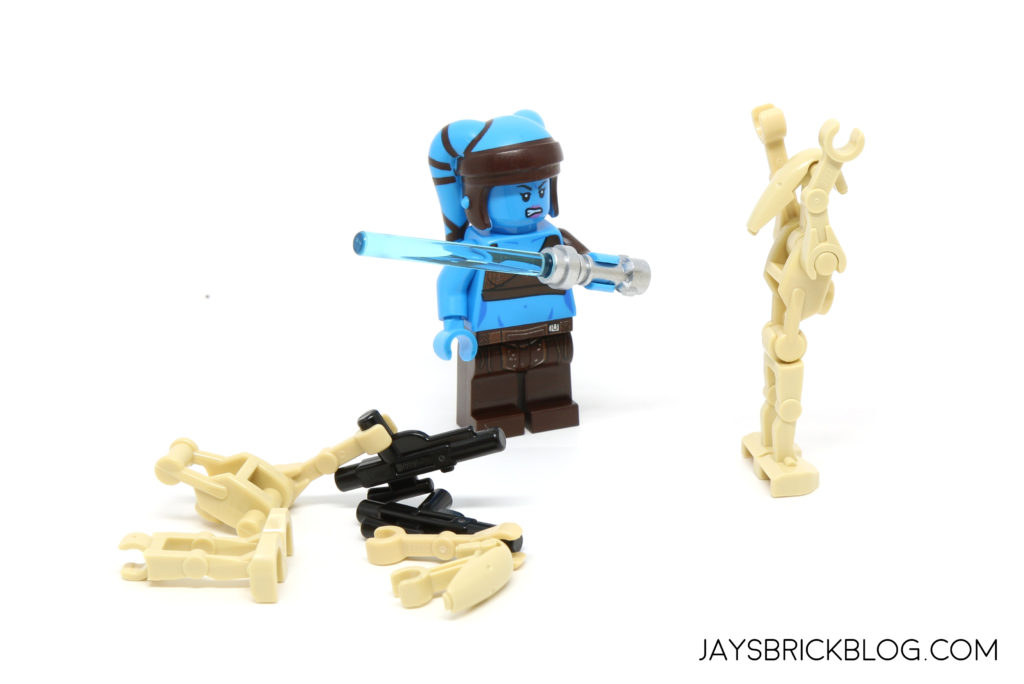 Rounding up her look is her blue lightsaber. As I’m a big fan of Aayla Secura, I’m very happy with how well her minifigure is designed and I’m really glad we get a normal looking minifigure instead of the cartoony one.

Prior to the Republic Fighter Tank being announced, I was this close to picking up the older minifig on Bricklink. 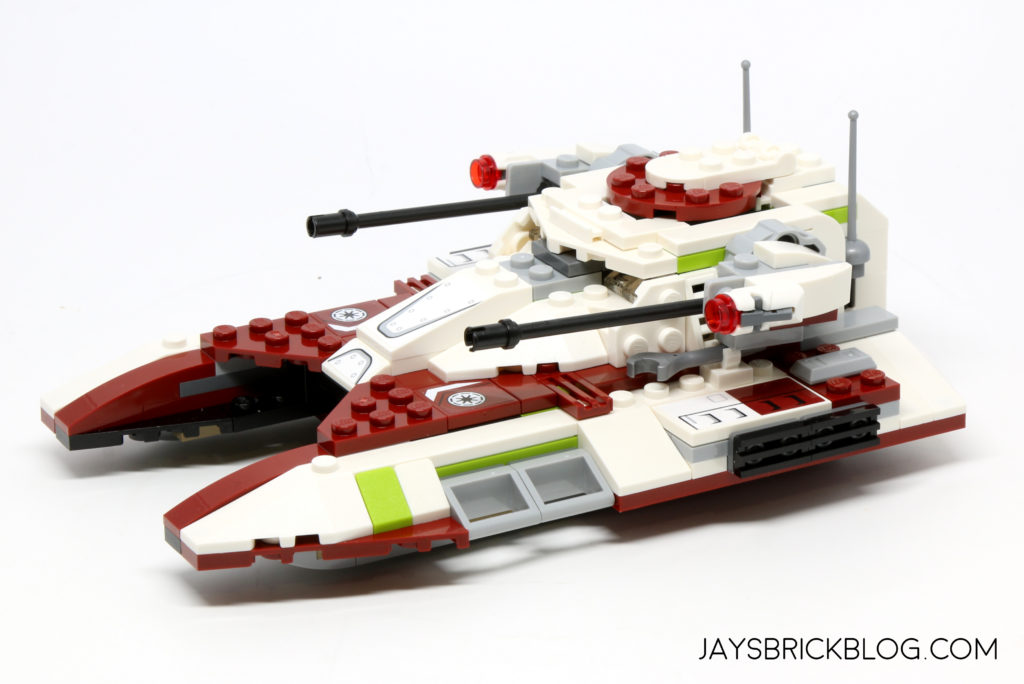 On to the main course, the Republic Fighter Tank itself. Firstly, the tank’s attractive colour scheme which masterfully intersperses dark red, white with bursts of lime green works remarkably well at grabbing your attention.

The build was fairly interesting, as you slowly put all the different parts together. It’s slightly repetitive because of its symmetrical design but it’s just the right length for a short but satisfying build. There are just enough fine details and flourishes to keep you occupied throughout the process, which I really enjoyed. 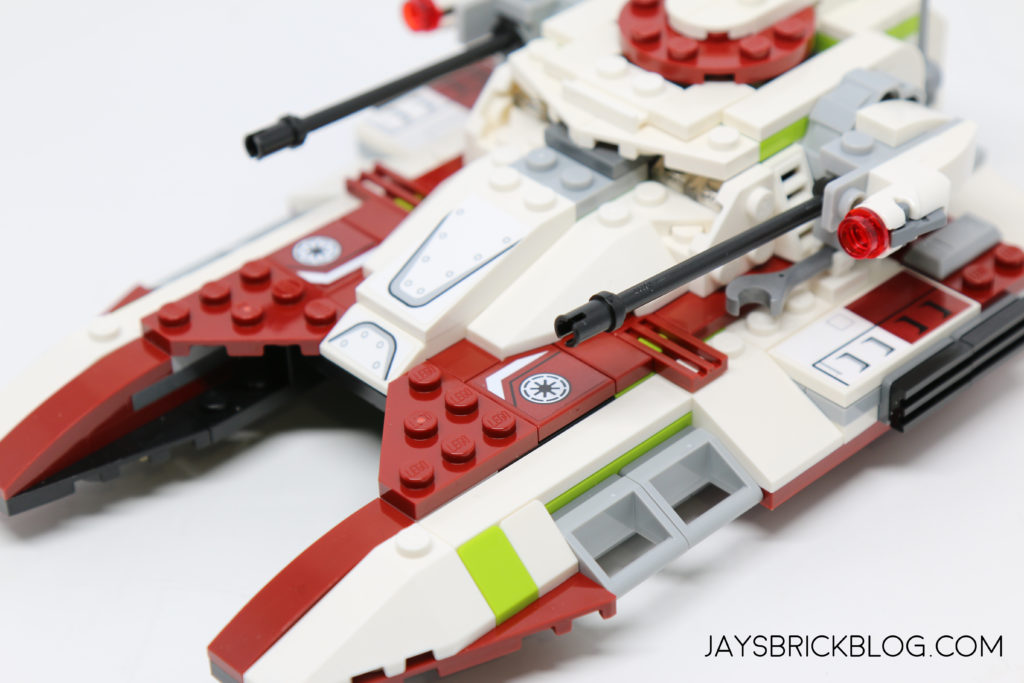 The tank’s two sloping prongs are visually pleasing, and are just the right length which helps it look quite accurate when compared to the source material. There are two stickers which feature the Republic insignia. 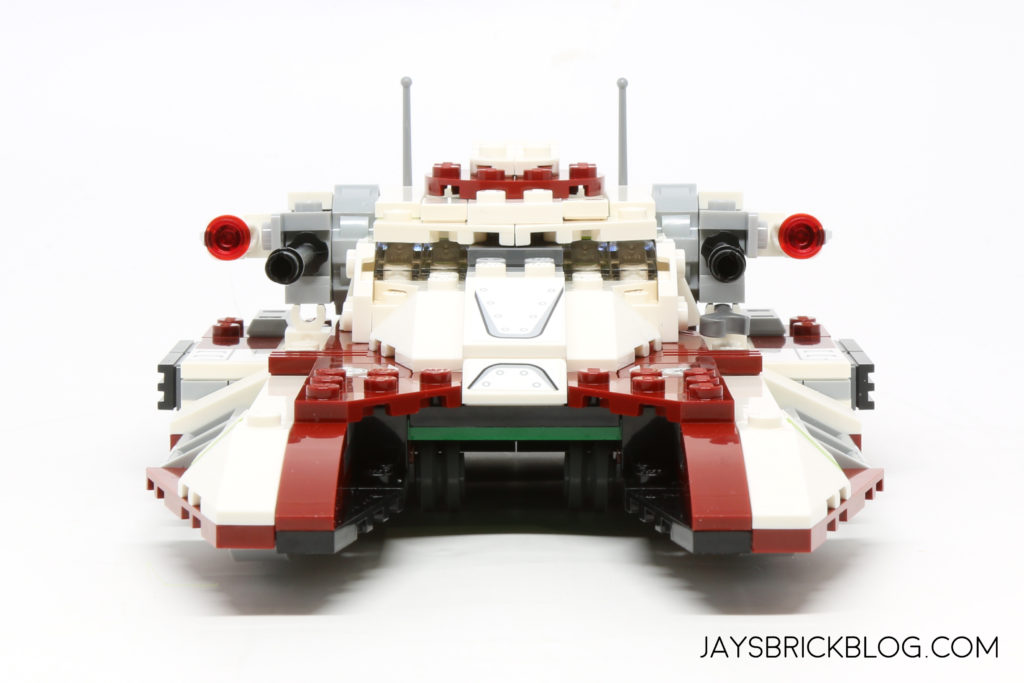 Here’s how the tank looks like from the front. Don’t know if it’s just me, but it bears a very close resemblance to a Clone Trooper helmet.

You can also see the wheels at the bottom, which allow the tank to move. When rolling the tank on a hard surface, the lack of friction makes it quite an unsatisfying experience – rubber wheels would’ve been a slight improvement to improve the playability of it. 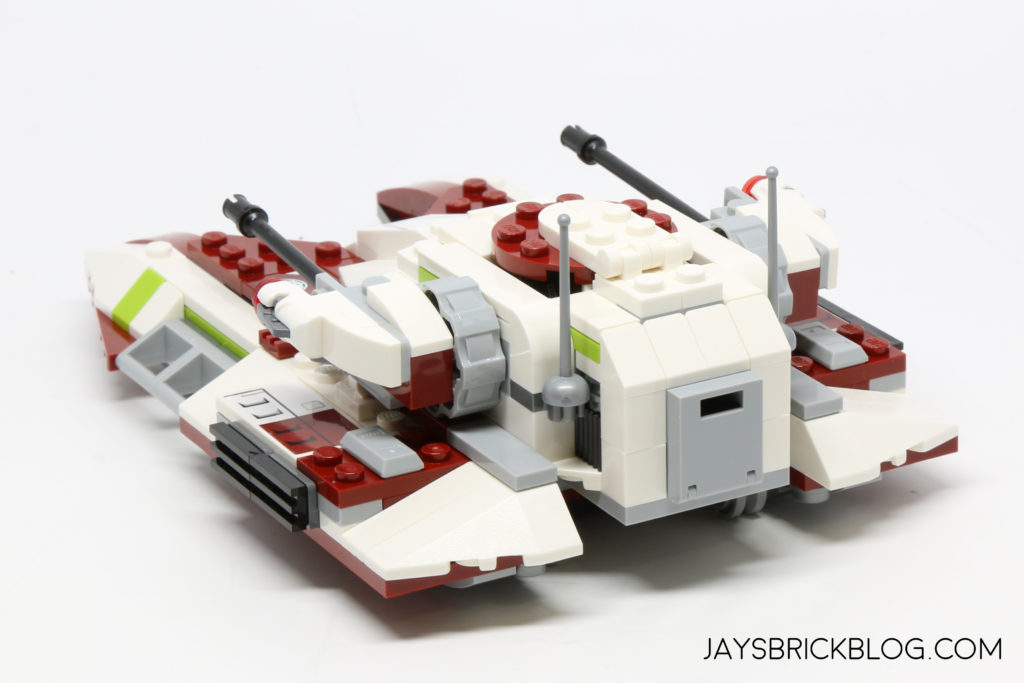 From the back, the Republic Fighter Tank has a small compartment which you can use to store ammo/studs. The use of pearl silver rapiers for the antennae were also a pretty clever touch and I appreciate the use of this non-traditional element. 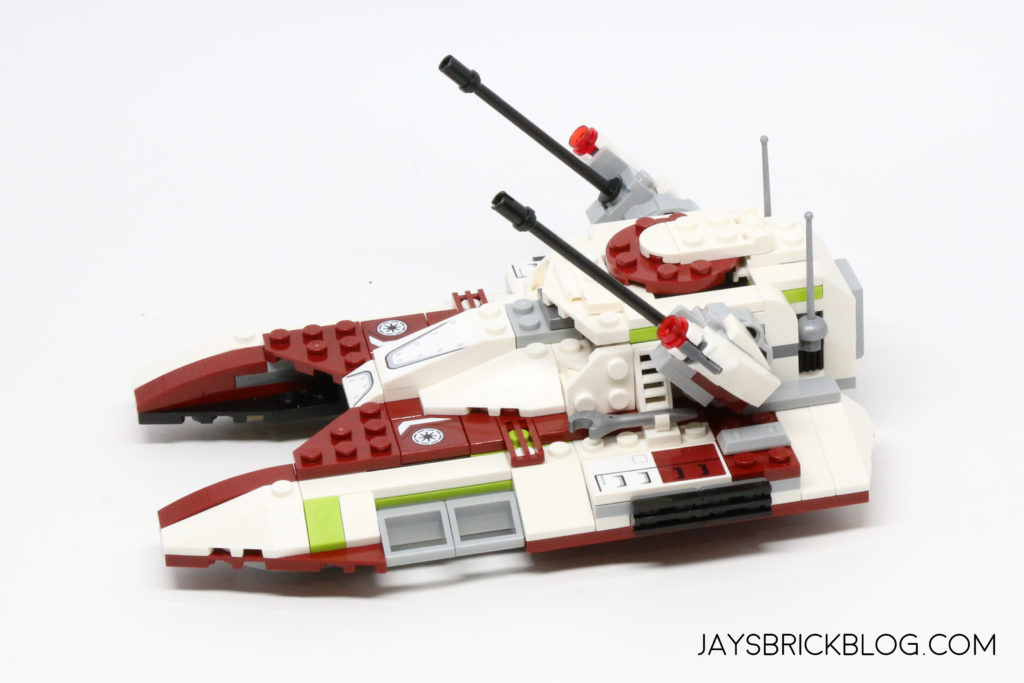 For weaponry, the Republic Fighter Tank’s two laser cannons can swivel at an angle which gives it an extra bit of playability. The cannons are just the right length and fit the overall scale of the tank well. 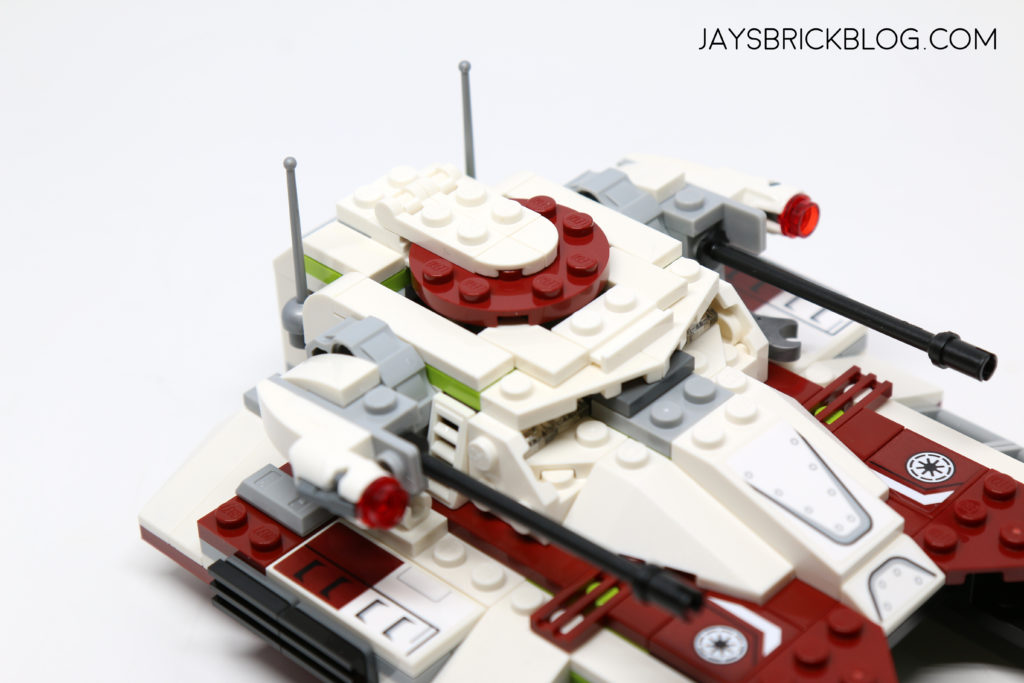 Attached to the cannons are also white stud blasters – these are fairly uncommon and it’s my first time coming across them. They look so much better in white compared to the usual black variants.

This photo above best illustrates my favourite thing about the Tank. I really like the layers of plates that cascade down the main section of the tank. The mix of plates, tiles and studs make it look like there’s a lot going on and represents a very smart use of texture and edges to add detail to the model. 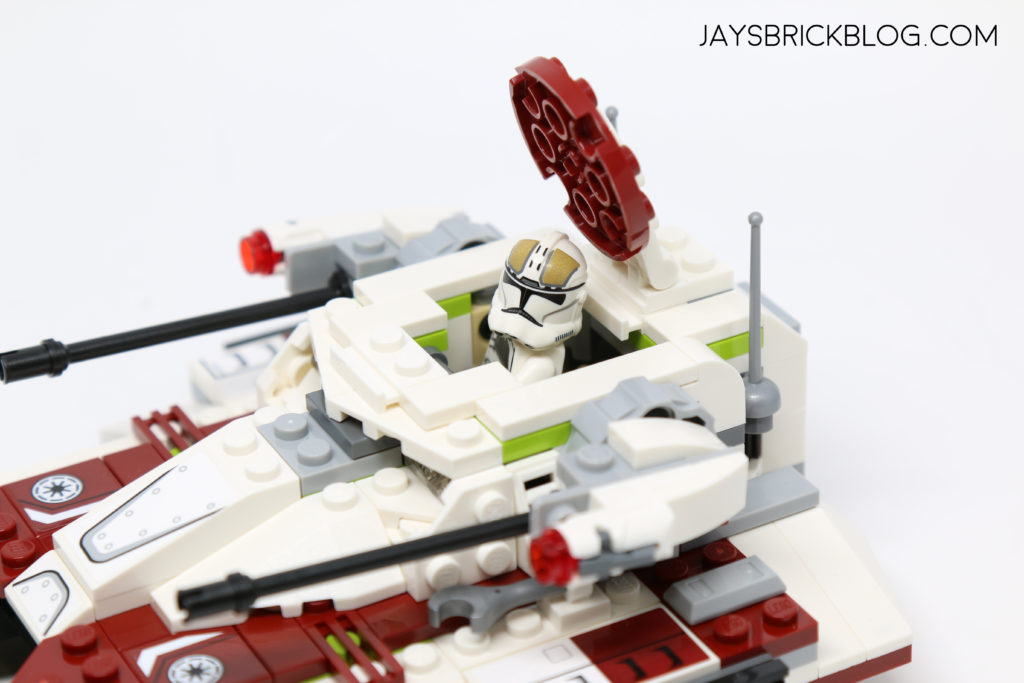 The hatch opens up so that you can access the tank’s interiors. There’s a small handle that the Clone Trooper can grasp to pop its head out like the photo above. It’s quite a tight fit inside and getting the Clone Trooper to grip the bar is quite a tricky feat. 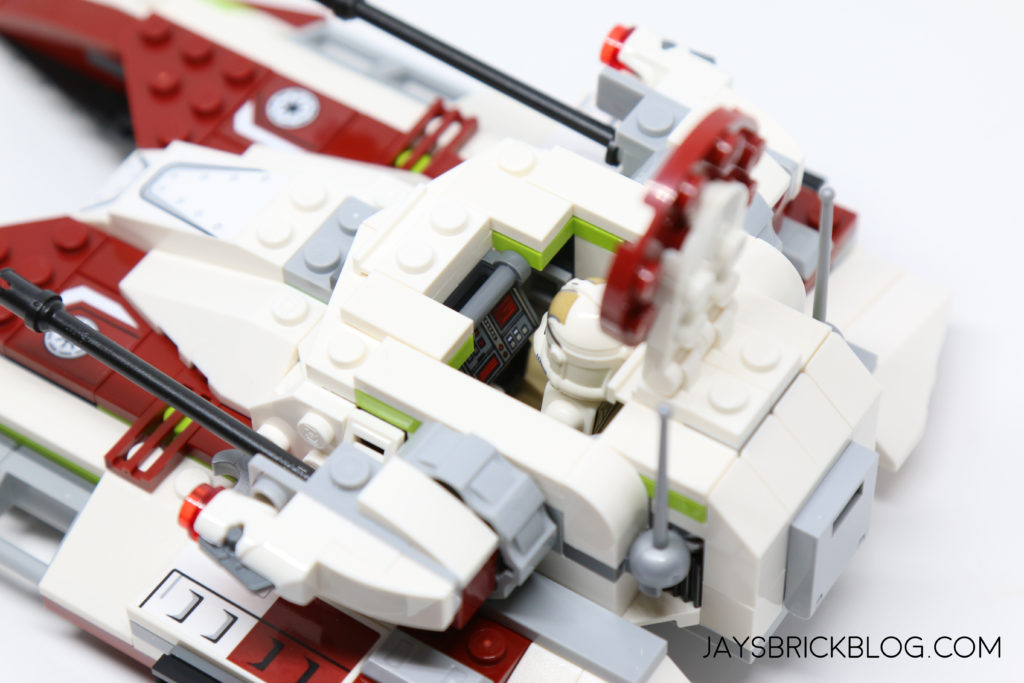 The inside of the hatch is spectacularly tiny, and there isn’t much wiggle room. You can see a printed control panel which was a nice surprise. There is also a set of control sticks inside which cleverly use a black bucket handle. 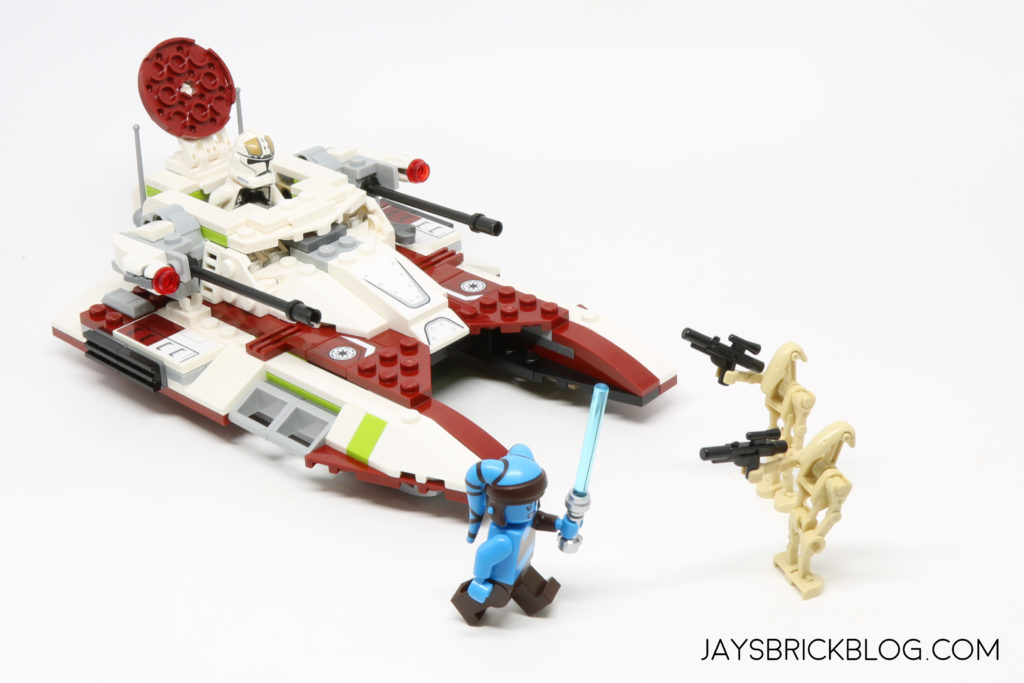 Final thoughts: I’m very happy with 75182 Republic Fighter Tank. The vehicle’s terrific design is accentuated by the attractive colour scheme benefits from being perfectly sized. It’s neither too big nor too small, and all the elements such as the two forward prongs, cannons and even antennae are all just the right size.

Despite being a relatively small build, the tank doesn’t skimp on details – there are plenty of nice layering techniques and aesthetic details which give it a very modern look – all of which are squeezed into a compact design which helps make it an easy piece to display.

There’s not much to complain about the tank – the wheels could be improved to boost playability, but as an adult collector, this small flaw doesn’t phase me too much.

The minifigure line-up is solid – you can always use more Battle Droids and the exclusive Clone Gunner Trooper is a great new variant for Clone Trooper collectors.

Aayla Secura steals the show with her fantastic design which trades in the cartoony eyes of her predecessor for a more elaborate printing on her torso and legs. Fans who have been awaiting a proper Aayla Secura minifigure are finally rewarded for their patience in stunning fashion.

For a AU$45/US$25 set, the 2017 version of the Republic Fighter Tank ticks all the boxes of a decent LEGO set. I feel like it’s fairly priced, especially if you can get it as a discount (which you should) and it’s one of those sets where the minifigures and model both pull their weight to produce a very satisfying LEGO Star Wars experience.

Obviously if you aren’t a massive Clone Wars-era fan, the set’s appeal might be slightly diminished, but can you really resist the allure of the best Aayla Secura minifigure yet?

Thanks for reading! It was really fun diving back into LEGO Star Wars reviews. It certainly helps that the sets released in this Summer 2017 wave are of a high calibre and I have the Darth Vader Transformation set in my sights for my next Star Wars review.

Tell me what you think of 75182 Republic Fighter Tank in the comments below – will Aayla Secura sway you to pick this one up, or are the better options currently on the market?